Through Their Eyes: A Graphic History of Hill 70 and Canada’s First World War

More than a century has passed since Armistice Day, and no men or women who served or fought behind the lines survive. Nonetheless, interest in the Great War remains high, and new material and new approaches continue to emerge. The Canadian Letters & Images Project, run on a shoestring out of Vancouver Island University, posts illuminating correspondence on its website, for instance, while the Military Museums of Calgary and the Canadian War Museum in Ottawa, among others, hold large archival collections. Military historians throughout the country produce works on all aspects of the conflict each year. The edited diary of a division commander in the Canadian Corps and a graphic history of the struggle are just two recent examples.

David Watson was a newspaperman before the war, serving as the general manager of both the Chronicle Printing Company and the Quebec Chronicle, Quebec City’s largest English-language daily. He was also a loyal Conservative and a militia officer. When Canada went to war in August 1914, he was named a commanding officer. Geoffrey Jackson, a historian at Mount Royal University, explains that sequence of events in his introduction to The War Diaries of General David Watson: “As the Minister of Militia, Sam Hughes, assembled the first contingent of the Canadian Expeditionary Force, competition for commands was fierce. Thanks to his connections, however, Watson was placed in charge of the 2nd (Eastern Ontario) Infantry Battalion.”

Watson began his diary in Quebec City, after he boarded His Majesty’s Transport Cassandra, bound for Britain, on September 25, 1914. The following day, he wrote, “Ship moved out of harbour about 7:30 p.m.” He continued to record his wartime experiences for nearly four years, until his return to Canada on July 1, 1919. The diary was later given by his grandson to the Military Museums of Calgary. Most of the entries are brief, often mentioning the weather, but they can be revealing.

The Canadian Division “got our marching orders” to head to France on February 7, 1915 — Watson’s forty-sixth birthday, “a pretty lonesome one away from all my ‘own folks.’ ” Soon after, his battalion was in the hell of the first gas attack on the Western Front. “My God!!” he wrote, on April 23, of the fighting at Ypres. “What an awful night we have had.” After two more days of savage combat, Watson was exhausted. He noted, “Had a roll call and found 376 men out of the best Canadian battalion that marched out on the 22nd of 1027 strong. Terrible.” Two-thirds of his soldiers had been killed, wounded, or taken prisoner, and he was shattered. 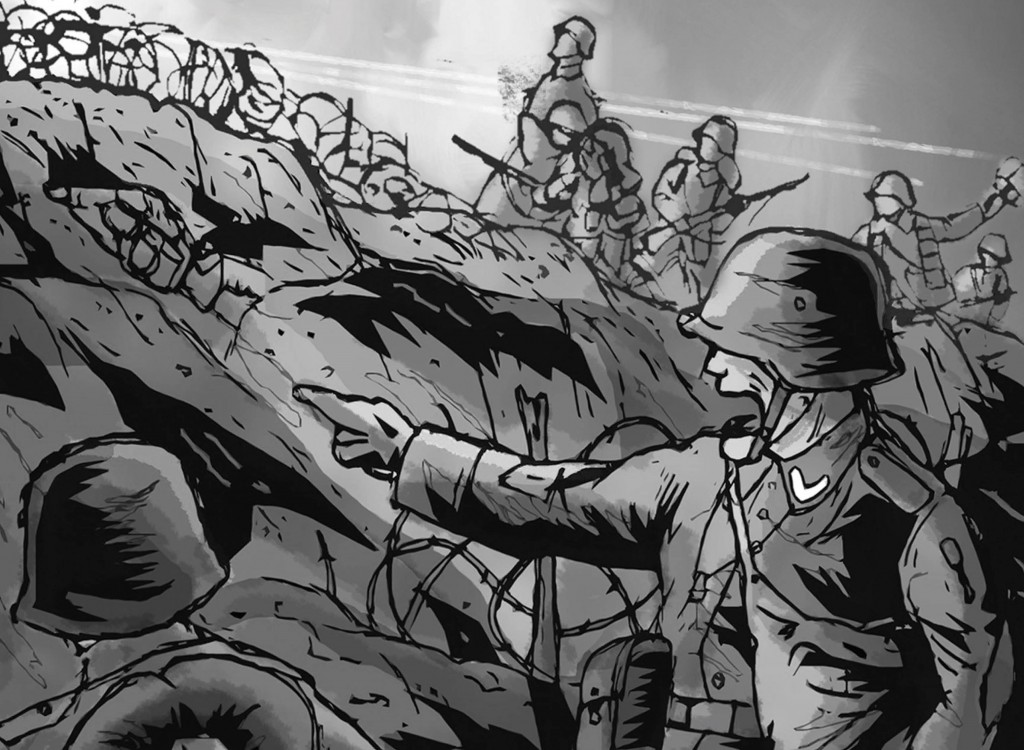 Recounting the Battle of Hill 70 through multiple visual techniques.
Image by Courtesy of McGill-Queen’s University Press

But Watson had done well in his first battle, and he soon was a brigadier general. A year after Ypres, following some politicking, he took command of the newly created 4th Canadian Division. The War Office assigned Lieutenant Colonel Edmund Ironside, an able British soldier, to assist Watson as his general staff officer, grade 1 — the division’s chief planner. (Some two decades later, Ironside would be a field marshal and the chief of the imperial general staff. Major Alan Brooke, an artillery staff officer, also served with the Canadians, and he too would become a field marshal and CIGS.) The 4th Division saw major action in November 1916 in the final stages of the horrific fighting on the Somme, when Watson’s men took Regina Trench, a key objective that had been fought over bitterly since July, in a succession of attacks launched by the British Expeditionary Force’s commander-in-chief, General Sir Douglas Haig. “Trip to Regina Trench. Going over it on the Bosche lines,” Watson wrote, in reference to the German position. “Terrible state of trenches. Unburied bodies, Parties out under Red Cross flag. Bosches looking at me from other side of block.”

Watson was not a great commander, but neither was he a so-called chateau general, living in luxury well back of the action. He paid visits to the front on an almost daily basis, frequently came under heavy shelling that he narrowly escaped, and spent endless hours dealing with personnel problems — firing an incompetent here, court-martialling another there, and promoting good fighters. He generally got on well with his subordinates and superiors, taking much praise and occasional criticism from Lieutenant General Sir Julian Byng, the British commander of the Canadian Corps. Watson was supportive of Sir Arthur Currie, who succeeded Byng in mid-1917. Indeed, Watson and one of his brigade commanders, Victor Odlum, each put up £1,000 to pay off a debt that Currie, who had embezzled more than $10,000 from his pre-war militia unit’s allocation for uniforms, owed the Department of Militia and Defence in Ottawa. Even so, Jackson observes that the Watson-Currie relationship was “always strictly business.” (Perhaps Currie resented those who had helped him out of his embarrassing personal problem.)

Watson’s record as a division commander has been scanted by historians who have thought him weak and attributed such success as he had primarily to Ironside. Jackson works hard to rehabilitate his man, but his efforts don’t quite succeed. Primarily this is because Watson was no Napoleon (who was in the First World War?). But it’s also because Jackson’s editing is woeful — his text is full of historical and typographical errors — and because he repeatedly misunderstands contemporary terminology and the blizzard of military abbreviations that litter Watson’s diary (and every piece of paper from those years). Jackson gets unit and individuals’ names wrong, for example — even Watson’s age at one point. Unfortunately, this is yet another book by a university press that simply does not reach an acceptable standard.

Happily, the same cannot be said of Through Their Eyes, a superb graphic history of Canadian involvement in the First World War. The authors, Matthew Barrett and Robert Engen, both hold doctorates in military history and know their stuff. Previously, the two worked for the Battle of Hill 70 Memorial Project, a group centred in Kingston, Ontario, that raised substantial funds and built, without government support, a splendid memorial near Hill 70 in the suburbs of Lens, in the Pas-de-Calais region of northern France. Part of the Hill 70 project was educational, including a book of scholarly essays (one of mine among them) and classroom materials that featured Barrett’s drawings.

“Attempting to recreate the past as only a realistic representation or literal translation of text may miss the vast potential of visual art to employ multiple techniques across many different styles,” the authors write in Through Their Eyes. “Photography, for instance, emphasizes stasis, iconicity, and an authoritative capture of a scene but is itself just a representation.” By abstracting such an image and stripping it down to its “essential ‘meaning,’ ” a skilled artist can convey a host of other insights. “Visualizing the past forces the historian to consider how incomplete sources and silences in the archival record determine which specific details are featured,” Barrett and Engen argue. “Graphic history can signal to the reader that what they are viewing is a construction based on pieces of evidence and historical accounts, assembled to make a truthful if not necessarily a realistic scene.”

Truthful but not necessarily realistic? For a traditional historian, trained to believe that the archival record is and should remain pre-eminent, that approach might be hard to swallow. But Barrett and Engen make it work by providing short, clear, and well-researched chapter introductions that focus on General Currie; on Lieutenant Brock Chisholm, who won the Military Cross and later served as the head of the Canadian Army’s medical services in the Second World War; on Frederick Lee, a Chinese Canadian private killed at Hill 70; and on six other men who earned Victoria Crosses in August 1917. A sixth chapter looks at broader themes of “killing, death, and burial” through several “first-hand accounts about the fighting at Hill 70.”

Ultimately, Through Their Eyes is a sophisticated volume that seamlessly mixes splendid drawings, archival photographs, research, good prose, and a command of the literature on both graphic art and Canada’s involvement in the First World War. This is a volume of which the authors and the publisher can be proud.