But what of the Canadian runner, who can’t fully relate to the Boulder, Colorado, or the southeastern Florida of these cult classics? Where is he or she to turn for inspiring metaphors, recycled nicknames, and mythologized training routes that offer, perhaps, a bit more maple syrup?

On a recent Saturday afternoon, not long after this year’s U Sports Track and Field Championships, a raggle-taggle crew of lanky twentysomethings gathered at Runners’ Choice, in Waterloo, Ontario. They’d come to celebrate what may be the answer to these very questions: Runners of the Nish, a 300-page self-published labour of love. In it, Prince Edward Island native and St. Francis Xavier University alumnus Alex Cyr shares his first-hand account of the X‑Men’s 2016 quest for a national running title. 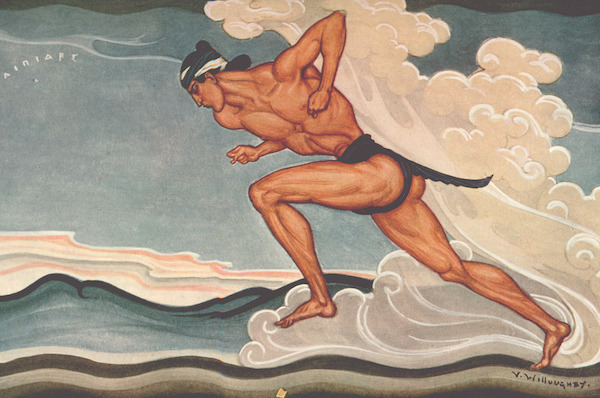 “Runners of the Nish” tells the story of a familiar grind—in a more familiar setting.

This was no ordinary book signing, though copies were available for purchase and the twenty-three-year-old writer eventually found a pen. Rather, it was a chance to mark the end of the racing season, to gossip about “the prodigal sons of Antigonish,” and to, quite naturally, go for a run.

The full spectrum of university colours crowded into the independent running store, with McMaster Marauders rubbing elbows with Laurier Golden Hawks. One or two Team Canada tops and a Southern Utah Thunderbirds logo punctuated the scene, while the first-time author wore a neon green jacket and his St. FX ring. “This is some faaast company in here today,” observed an older guy (also a runner) who had come to collect an autograph.

This was no ordinary book signing, though copies were available and the twenty-three-year-old writer eventually found a pen.

With a wide grin, Cyr ushered everyone out the door for an easy five or ten kilometres. Recovering from surgery to repair patellar tendonitis in his left knee, he hadn’t trained with other people in months. On the run, he answered a few questions about his book, which has sold 1,500 copies since last July, before the talk turned to another favourite running topic—alcohol. “It’s a real thing,” one decorated athlete observed two clicks in. “We’re either getting fit or getting drunk.” Everyone laughed as the pace inched downward.

According to the Writers’ Union of Canada, the Canadian book industry is worth nearly $2 billion a year. Yet, with average annual earnings of just $9,380, most authors can’t stay above the poverty line by writing alone. Cyr nets about $13 for each copy of Runners of the Nish, which he sells online, through consignment at mom-and-pop running shops, and at low-key appearances that he promotes on social media. “The natural community is kind of saturated at this point,” he admits. The trick now is to reach beyond the U Sports fraternity. Still, the author-cum-publisher-cum-publicist has already net a relatively tidy profit.

Back at the store, now smelling more like a locker room than a retail outlet, Cyr drew names for some swag giveaways (“If you like split shorts, there are lots of those,” noted the New Balance rep who helped organize things). The young author signed a few more copies, while dozens of his peers milled about in tights and snacked on free food. Then he directed the assembled harriers to the historic Huether Hotel up the street. The literary affair was over, but the drinking had just begun. “I wouldn’t be comfortable going out in these clothes with any other group of people,” the bookish runner said, still with a grin.

Kyle Wyatt is editor of the Literary Review of Canada. He also runs.

Originally published in the April 20, 2019, instalment of