Phil White’s studio is on the ground floor of an office tower in Gatineau, Quebec. He is slim and smiling, dressed in jeans and a fleece, with a head adorned by a shock of salt and pepper hair. His soft skin belies a firm handshake and rugged profession. He is an author who works in stone—Canada’s Dominion Sculptor.

His is a time-honoured calling, befitting a man who traffics in rock, wood, and metal as he records the nation’s stories. The position was created in 1936, to preserve carvings on Parliament Hill and to ornate it with new ones. To that end, Centre Block architect John Pearson left 2,000 or so blocks of stone untouched. Today, a couple hundred remain. In a town where politicians come and go—and where opinions change quicker than one can mumble SNC-Lavalin—the sculptor’s work is threatened only by the elements, by vandalism, and by the degradation of time. 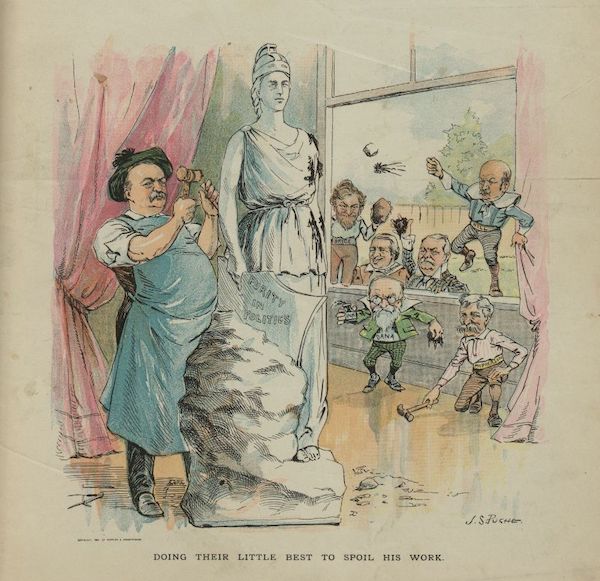 The elements threaten the sculptor’s narrative more than the politicians do.

In his mid-fifties today, White received his first penknife at the age of five and his first chisel a year later. While his mother disapproved of his sculpting hobby, his father urged him on, and by seventeen he was selling original woodcarvings in an art gallery in Peterborough, Ontario. In 2006, he became the fifth Canadian to take up his post on Parliament Hill.

Much of his work involves the restoration and recreation of items in the Parliamentary Precinct that have been ravaged by brutal Ottawa winters. Since the renovation of Centre Block started in fall 2018, he has also been ornamenting the temporary chambers for the House of Commons and the Senate.

White is an author who works in stone—Canada’s Dominion Sculptor.

In 2012, White was commissioned to create altars for seven books of remembrance in the Memorial Chamber, which list members of the Canadian Armed Forces killed in action. He designed the base of the altar, which was cast from bronze and ornamented with poppies, and decided the top should be carved from Hopton Wood stone. It was an appropriate choice: the limestone was used for the chamber’s original central altar and was chosen by the Commonwealth War Graves Commission for headstones throughout Europe.

Nowadays, Hopton Wood stone is almost impossible to find, but Britannicus Stone, a London-based specialty company, managed to source some from a Derbyshire mine that had closed in the 1950s. While Centre Block undergoes its facelift, the Memorial Chamber books have been moved to the West Block Visitor Welcome Centre, where White has added an eighth altar.

For thousands of years, sculptural work has been cast or carved by hand. But in 2015, modern technology began supplementing the Dominion Sculptor’s craft, as university students at the Carleton Immersive Media Studio used lasers to create a three-dimensional owl out of high-density urethane foam. After computers etched the bird into a blank stone, White began chipping out tiny pieces to add texture and depth. For months, he edited the work, to the soundtrack of a tapping chisel and thudding rubber mallet.

White is happy to hand over grunt work to technology, but is quick to point out that it has its limitations. Just as a writer can’t give over his or her craft entirely to the keyboard, there’s no substitution for a sculptor’s human hands. “The continuity of our work is important,” he explains. “It’s how I can maintain the corporate memory of those who came before me, along with the history of the buildings and the story of Canada itself.”

And with that, he leaves—a bust of the Queen gazing after him as he goes.

Hattie Klotz is a journalist, gourmande, and gardener in Ottawa.

Originally published in the May 4, 2019, instalment of