Bee Time: Lessons from the Hive

Bees are undeniably important to people and to nature. Can they also teach and inspire us to find solutions to complex environmental problems through collective rather than individual decisions? In his new book Bee Time: Lessons from the Hive, Mark L. Winston answers with an enthusiastic yes.

A long-time biology professor and academic director of the Centre for Dialogue at Simon Fraser University, Winston is a world authority on bees and the ways they communicate. His book is in part a backward glance at career high points. While a graduate student in the mid 1970s, for example, he was part of a small team sent to French Guiana to determine whether it was possible to stop a New World invasion of African “killer bees” from spreading as far north as the United States. He describes the myriad reasons why the team failed in its objective at the same time as he and his colleagues unwittingly gained global media attention.

The killer bee episode had a host of serious consequences, which Winston describes in detail. Twenty-six colonies, accidently set loose in Brazil, expanded within a few short years to an estimated population in the trillions. The pre-existing bee population in the Americas was genetically absorbed by this new species and beekeeping practices were upended in the invasion’s wake. Of far more contemporary concern is his discussion of the recent mysterious and massive decline of honey bee colonies in countries of the northern hemisphere. Winston gives a sense of the epic size of this calamity, which has come to be known as colony collapse disorder, or CCD:

Currently in the United States, beekeepers are losing close to 850,000 of their 2.6 million colonies each winter, rebuilding these numbers during the spring and summer, and then losing the same number again the next winter. The number of beekeepers has crashed as dramatically as the number of colonies has collapsed, from 210,000 in 2002 to about 120,000 in 2013. Global colony losses run into many millions of colonies annually.

Although the exact causes of CCD are still a matter of scholarly debate, there is no doubt that human activity is vitally involved. There seems to be a wide range of factors working in destructive synergy, all related to how humans are managing the environment on which honey bees rely. We are polluting this environment with pesticides and are using agricultural practices that reduce the diversity of blossoms upon which honey bees depend. As Winston notes, we have also adopted beekeeping practices that favour the spread of disease and affect bees’ general health:

Some US operations manage up to seventy thousand colonies, or at least used to before CCD devastated the industry … Typically, colonies are wintered in southern states feedlot-style, in apiaries with hundreds or even thousands of colonies side by side on pallets, fed corn sugar by hose to keep them alive until moved by flatbed truck to California in the spring to pollinate almonds. The hives are then moved again a few weeks later to pollinate plums, then on to apples, trucked north and east for summer honey crops, and finally back south for winter.

Industrial farming practices also make agricultural ecosystems unfriendly to pollinators. Intense use of pesticides and tilling in large acreages of monocultures intoxicate bees and destroy weed forage and nesting sites. Moreover, the price of hive rentals has tripled in the last decade, a huge incentive for beekeepers to keep on the move and rent out more hives, which is stressful to the bees. Winston discusses studies that demonstrate that leaving portions of uncultivated land could make these environments friendlier to pollinators but still profitable. Other practices such as planting several crops instead of monocultures and decreasing the use of pesticides would extend the number and diversity of wild pollinators. Winston and other scientists cited in the book suggest that economic drives and benefits can be implemented to change this trend. These incentives can be provided through ecosystem services so that bee pollination becomes ecologically based rather than management based.

Where bees do thrive in numbers and diversity is in modern cities. That is because cities hold unmanaged green spaces, and home backyards are planted with native species that provide nectar and pollen to bee populations. Bees thriving in cities are a good example of reconciliation between human needs and those of other species. Thus, bees and humans can coexist without damaging the environment. Winston argues that “underlying the stories of bees in the city are the profound benefits derived when we successfully weave the natural and the managed worlds together.” This implies that we can learn the lesson from cities and apply it in agricultural ecosystems. We can create better environments for bees and for ourselves in different settings and locations, not only in cities. 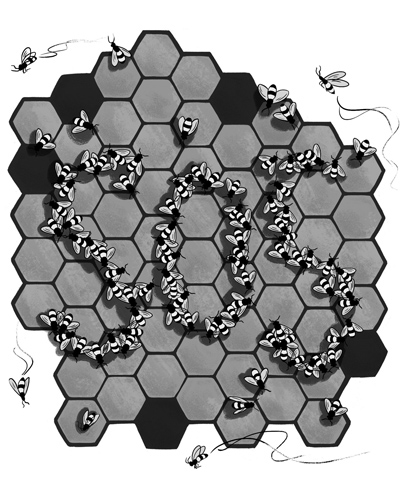 For its clear and concise treatment of these crucial issues, Bee Time deserves close attention from both professionals and a lay audience. But this is hardly the end of Winston’s story. Ironically, just when honey bees are experiencing the impact of CCD, human knowledge of their distinctive social attributes is deepening in remarkable ways. Winston does a great service by making these findings accessible to a general readership. He begins by itemizing the jobs that bees specialize in at different ages, and explains how this specialization in one task at a time allows colony adaptations to different needs, conditions and environments:

They [worker bees] begin by cleaning cells for a few days, then feed larvae from about five to twelve days of age, then receive nectar and pollen, move on to build comb, fan the nest, and then guard the entrance. Bees finish their lives by foraging for five to ten days before wearing out and dying somewhere between twenty-five and thirty-five days of age.

In other words, bees spurn multi-tasking—an avoidance Winston argues is a major strength. “Bees may not be intelligent,” he notes, “but they are single minded.” The coordination of the nest’s various tasks takes place through a variety of stimuli. One notable stimulus is the transmission of a pheromone from larvae to workers to inform workers of the larvae’s need to be fed. Another features a regulating mechanism based on the number of empty cells in the nest. If numerous cells are empty, foragers perform a vigorous recruiting dance. In other cases, they reduce their pace of work. As Winston notes, despite Chaucer’s famous simile “busy as a bee,” worker bees are quite capable of doing nothing.

Meanwhile, communication is occurring constantly among nest members. “Bees aren’t communicating in any verbal way that’s familiar to us,” says Winston; “nevertheless, they are deeply engaged with each other, passing along information about the world outside and conditions within the colony.” Much is accomplished by mutual touch. “The most frequent behaviour when worker bees meet is rapidly stroking each other’s antennae. They’ll do this for a few seconds to a minute or longer while also extending their long mouthparts, licking each other’s tongues, heads, and legs and exchanging food.”

As with the messages passed between larvae and their nurses, the language used in these everyday conversations is chemical. The pheromones being shared often relate to the queen of the nest, whose well-being is crucial to collective survival. Winston translates a likely exchange between two worker bees: “How’s our queen? She’s still present, in good health, and laying eggs? Excellent. Long live the queen!”

Such messages begin with those in the queen’s immediate company. Winston describes this group as a “retinue of ten to twelve worker bees that surround the queen, licking and touching their antennae to her furiously for one to two minutes each.” He and his research colleagues have intensively studied the role of these courtiers, whose mandate appears to be picking up the queen’s pheromones, which are then passed on to others. The research team was able to identify the mix of compounds included in these pheromones and has established what members believe to be the way the chemical messages are transmitted to the rest of the colony. Winston summarizes their findings as follows:

These elaborate interactions reflect a complex language based on specialized chemical signals that provide syntax deep in complexity and rich in nuance. The colony’s pheromone signals are characterized by intricacy and synergy, influenced by the context in which they are deployed, and mediated by their temporal and spatial distribution.

Throughout this extended chronicle of honey bee sociality, Winston uses analogies between bee and human behaviour, leading him to argue that humans and bees, even though distantly related in evolutionary terms, have developed similar strategies about how to perform work and make decisions. As he does so, he suggests a range of lessons we can learn from the structures of bee decision making. Whether one agrees with the lessons he teases out of his description of bees’ community life will likely depend on how one interprets the relevance of self-awareness and cognition as an essential part of communication.

I believe bees are not aware of what they are doing and Winston recognizes this fact when citing a statement by Princeton ecologist James Gould: “Our imaginations are insufficient to understand how they sense the world.” We reason and communicate through the filter of our cognition, morals, values and culture, but we do not know how bees process and interpret information. Winston uses communication in bee societies as an excuse to introduce topics that particularly interest him, such as the ulterior meaning of dialogue. Dialogue develops from the capacity to listen to what others say, he notes, as we focus on trying to understand their point of view without prejudice, as well as from the capacity of responding constructively. Winston’s excuse is valid because these comparisons are a vehicle for this meaningful purpose. He believes that dialogue can inspire people to make changes and to resolve complex issues.

Throughout the book, Winston narrates stories of several decades of studying bees and how those years (bee times) enriched him with knowledge, reflections and pleasant learning experiences that helped him better understand himself, our communities and our environment. Bees have given him the opportunity to travel, meet people engaged in different activities of life, enjoy nature and learn from interacting with people and nature. He reflects on these experiences and translates them into philosophical statements on how to make this a better world, more attuned to nature and with social causes. In different sections of his book, he conveys the message that communal caring rather than individualism is the most sensible way to go through life interacting with other humans and with our environment. He advocates open, constructive communication and an open mind as key tools to achieve this goal through the power of dialogue. Winston believes that through effective dialogue we can find solutions to difficult issues and that we may develop strategies that “combine economic prosperity with environmental and social sustainability.”

In Bee Time Winston tells us with simple words and creative analogies how bees teach us to better understand our place in nature and about how to apply these lessons in our communities. We can make a better world for bees and for us by controlling nature, but it will take the submission of individual aspirations into collective goals, as bees do. These changes require altruism, ethics, teamwork and effective communication, and bees can inspire us to achieve them. I highly recommend this book; those who read it will change the way they see and appreciate nature and human societies.

Ernesto Guzman-Novoa is a professor and the director of the Honey Bee Research Centre in the School of Environmental Sciences at the University of Guelph.