Bad Singer: The Surprising Science of Tone Deafness and How We Hear Music

There is a battle being waged about music, about why we like it so much and why we have it at all. On one side, we have cognitive scientist and linguist Steven Pinker, championing the “auditory cheesecake” team, those who believe music to be a non-­evolutionarily crucial, although pleasant, side effect of our development of language. On the other, we have professor of psychology and behaviour neuroscience Daniel J. Levitin, who champions the pro-evolutionary stance first put forward by Charles Darwin, that, in the English biologist’s words, “musical notes and rhythm were first acquired by the male and female progenitors of mankind for the sake of charming the opposite sex.” Both sides are well argued, rigorous and contemporary, leaving us with a rather thrilling answer to the question why do we make music: no one really knows.

This certainly has not stopped academics and practitioners across myriad fields from delving further into the complicated relationship we have with this particular art form. There is one point in Tim Falconer’s Bad Singer: The Surprising Science of Tone Deafness and How We Hear Music when a researcher lays out her goal: “to better understand the mechanics behind pitch perception and music processing at the behaviour level, at the cognitive or theoretical level, at the computation level, at the brain level, and at the genetic level.” Falconer’s book, which also incorporates sociology, pop culture analysis and a personal journey, attempts to achieve no less. Bad Singer strives toward some sense of truth through whatever disciplines and routes possible, seeking solid ground in the often shaky science of music.

Although the earliest instruments as yet discovered are 35,000-year-old bone and ivory flutes, it is fairly universally assumed that we made and played drums long before that, and that, before any formal instrumentation—flute, drum or otherwise—the earliest form of human music making came from our own bodies, clapping, stomping and, of course, singing. The voice is an instrument shared by every culture; as Falconer points out, “traditionally, whenever people gathered they would sing.” This is why it rings true when he admits flat out, “I’m a bad singer. And deep down, it matters.” Historically, we have always sung; we should all still be able to. 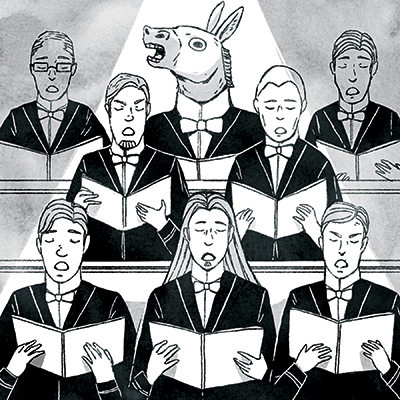 Bad Singer is really two books in one: the personal narrative of Falconer as he confronts and attempts to understand and overcome his own failings as a musician and vocalist, and the broad, if not always in-depth, exploration of humankind’s relationship with music along various scientific and sociological avenues.

It is a formula that works; Falconer, a journalist by trade, knows the value of a good story, and his personal story gives context and relevance to what could otherwise be a dry compilation. We are interested and invested as he discloses his life-long struggles with intonation and the idea of performance, the frustration and embarrassment of not knowing when he is out of tune, leading to the unlikely climax of his true amusic diagnosis. (One exception to the pace is an early paragraph entirely given over to listing academics within the book’s field; no more than a series of names, it is of little interest to anyone except other academics, for whom this book, with its gentle entry-level approach to the topic, is not written.) The pacing falters a little in the second half of Bad Singer, after we have learned his official diagnosis and are left relatively story-less through a bit of waffling on-and-off-again music lessons up until the final chapter and concert. Perhaps the idea is that by this point we should be hooked far enough into the more informative content to maintain momentum without the impetus of the narrative plot; however, Falconer does too good a job of building story tension in the first half for it not to be missed when it dries up.

Falconer’s naive layperson narrator functions especially well as a bridge; we do not feel intimidated by the scope and depth of the various academic fields he dives into, as Falconer himself takes the plunge and asks the questions, silly or otherwise, for us. Questions such as: why do people like sung music so very much, with the vast majority of popular music across all genres, from folk to hip-hop, featuring the voice as lead instrument? The answer to this is laid out by a small team of experts, and involves everything from empathy to intermediality and ethnomusicology.

Another of Falconer’s inquiries is, what, exactly, is meant by that ubiquitous term, musical timbre? One recent study of more than 6,000 sounds narrowed timbre down to around ten parameters, “attributes such as brightness, attack time, effective duration and noisiness,” while another aims not to break it down at all, but instead, recognize musical timbre as one “complex spectromorphology, an electroacoustic term for the sonic footprint of a sound spectrum as it changes over time.”

Most relevant to Falconer’s plight, perhaps, is a study that recently proved that timbre is a musical attribute that tone-deaf people can and do respond to, despite an inability to distinguish pitch, leading us to a third, inevitable, question: what does it actually mean to be tone deaf?

The two threads of the book twine especially neatly in this quest to concretely define tone deafness and bad singing. The popular and easiest definition of a bad singer tends to be someone who is not in tune. This is what the scientific, lab-testable definition of tone deafness, or amusia, is based on. We follow as Falconer undergoes several guinea pig sessions in various labs for his own diagnosis. (There is a less rigorous version of the test for those who would like to analyze themselves at home, called the BRAMS online test.) While I will refrain from revealing the results of Falconer’s evaluations here, it is notable that far fewer people are actually tone deaf, or amusics, than think they are. While around 20 percent of the population are good enough to know when they are bad—they can hear that they are not hitting the notes they want to be, and are therefore not considered true amusics—only 2.5 percent are actually, properly, tone deaf, that is to say, unable to hear the differences between close pitches.

Those are satisfyingly tidy numbers. However, they still do not really bring us much closer to a sturdy definition of “good” or “bad” singing, as singing off-pitch is not always condemned. In fact, there are a number of musicians who have made a career of it, such as Bob Dylan and Neil Young. Singing slightly out of tune can lend an air of authenticity valuable in musical genres such as folk (as well as punk, rock and others). Note New Yorker editor David Remnick’s description of Dylan’s drawl, “He has a true voice.”

And so, frustratingly for our narrator, who is paradoxically told in singing lessons, “worrying about your singing while you’re singing means you’re doing it wrong,” searching for a quick route to having a “good” voice or being a “good singer” is not as easy as just being in tune. Or breathing well. Or having strong abdominal muscles. As with the question of the origin of human music, there is no one, firm, scientifically proven answer to what makes a good singer. But this, perhaps, can be as liberating as it is frustrating. We are currently governed by a “cultural hierarchy that devalues our amateur efforts and encourages consumption rather than creation,” Falconer argues, and it is easy, but also distracting, to get caught up in a drive for scientific measures of one’s own talent. Instead, when Falconer states early on, “singing is something we should all be able to do,” we should not interpret it to mean technically, but, instead, read it more generously: singing, music making, is something innate and important to us all. We might not know exactly why or exactly how, but that should not stop us from, alone, with friends, or on stage, opening out and letting loose our own version of a joyful noise.

Emma Hooper is an author, musician and academic. Her next book, A Long Sound, A Low Sound, will be published by Penguin Canada in 2018. She teaches pop-music sociology at Bath Spa University. Although Emma lives in the United Kingdom, she comes home to Alberta to cross-country ski as often as she can. www.emmahooper.ca