The historian Mary Beard began SPQR: A History of Ancient Rome, her acclaimed 2015 book, by pointing out that our understanding of historical people and places evolves with “new ways of looking at the old evidence, and the different questions we choose to put to it.” Even as she would present ancient Rome in a very new light, she attempted to steer her readers away from the “dangerous myth that we are better historians than our predecessors.” By examining the evidence with a different set of priorities — in her case things like gender identity and food ­supply — historians simply ask the past to “speak to us in a new idiom.”

The writer Mary Soderstrom, perhaps best known for her novels and short stories, has likewise pursued a new idiom with her book Frenemy Nations. It’s a transdisciplinary and sometimes surprising comparison of adjacent polities, which Soderstrom treats almost as siblings, even twins. If neighbouring societies share so much in common, on paper at least, what makes them grow up to be so different? Why, for example, are Canada and the United States more like fraternal twins than ­identical ones?

Soderstrom has compiled an impressive diversity of pairs, ten in all, which she at once admits is a sample both “so small” and “chosen in such an idiosyncratic manner that blanket assertions about lessons to be applied elsewhere would be foolish.” Nonetheless, she draws out instructive connections as she considers a range of geopolitical contexts, from very old neighbours like Scotland and Ireland to younger intrastate ones like Vermont and New Hampshire. It’s a lot of ground to cover in a not-quite-long-enough volume. Each case study leaves the reader wishing for more. 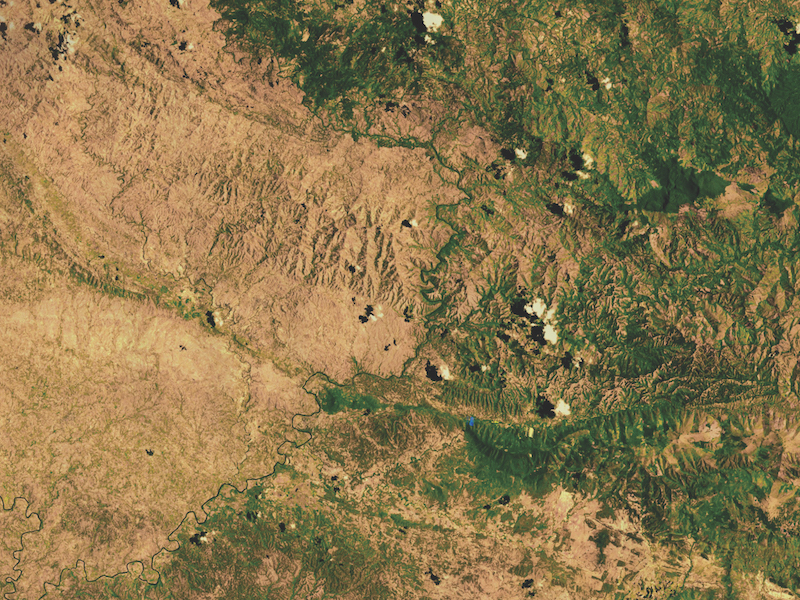 Even side-by-side states, like Haiti and the Dominican Republic, can be dramatically different.
Image by NASA / Wikimedia Commons

In 1968, at the height of the Vietnam War, Soderstrom emigrated from the United States, settling in Canada like nearly a quarter of a million other Americans at the time. This personal experience informs Frenemy Nations, and Soderstrom uses the two countries as her framing case study, exploring subtle geographic variations, colonial histories, interactions with the wider world, the treatment of women, the influence of language, the role of education, and migration patterns. Such critical factors account for differences not just between Canada and the United States, she contends, but between many neighbouring states and regions around the world.

She then leans on an impressive collection of passport stamps, having visited many of her pairs while thinking about and writing this book. Case in point: trips to Haiti and the Dominican Republic. As she does elsewhere, she bolsters her look at these two countries, which share the small and geographically isolated island of Hispaniola, with her personal travel experiences. Here, Soderstrom explains the very different countries of today, former French and Spanish colonies, respectively, through differences of yesterday. The French colony established plantations for growing and exporting sugar, cotton, and tobacco — all demanding the labour of hundreds of thousands of slaves, many of whom died under terrible conditions. Spain’s half of the island, however, was “based on agriculture for local consumption, so far fewer slaves were imported to work plantations.” The two origin stories help us account for modern demographic differences, as well as striking visual ones:

From high above, the cities and roads built by the people of the two frenemy nations (who now number nearly twenty million) are clearly visible, but, even more strikingly, you can see that the forest has nearly all disappeared on the Haitian side of the border. It is as striking a boundary as there can be.

Elsewhere, Soderstrom looks at Kerala and Tamil Nadu, two states in southern India. There she unpacks how the frenemies are largely different from the rest of India, with only a drive-by on how they differ from each other and why. While she does consider differences in “religious mixture,” the chapter is something of a missed opportunity, not nearly as developed as her look at Vermont and New Hampshire or her chapter on Alberta and Saskatchewan.

Indeed, Soderstrom is most comfortable in her own backyard. In examining Canada and the United States, she deftly reframes a common conservative criticism of Quebec: that efforts to keep it a happy member of Confederation have led to overall growth in the size of the federal government. She instead casts French influence as a historical virtue, arguing that France’s legacy in Canada is that of greater government investment in the social safety net, relative to that in the U.S. Her qualitative view that American society developed in a more violent fashion, because of its frontier nature, is nothing new, but she complements it with quantitative research from MIT. Economists there have shown that violent crime rates today are higher in Canadian prairie communities that were founded farther away from RCMP detachments in the late 1890s and early 1900s. Perhaps there’s something to the frontier myth after all — in both countries.

Soderstrom’s most striking insights come when she draws comparisons among her frenemy pairs.

Despite Soderstrom’s warnings about “foolish” lessons, her most striking insights come when she does draw comparisons among her frenemy pairs. In considering the divergence of Scotland and Ireland, for example, she discusses how migratory patterns resulted in an Irish population that almost universally has the gene necessary for adults to digest milk — largely through exposure to cattle. In Burundi and Rwanda, two countries that have experienced genocide based on culturally constructed differences, Soderstrom points to this same gene to show that, genetically, Hutus and Tutsis are much more alike than different. Because both “societies have included a long herding tradition,” she notes, they have “extremely high” rates of lactase persistence. Put another way, the ability to digest milk is equally prevalent among Hutus and Tutsis, which not only helps to dispel the artificially constructed differences between them but, in some respects, makes them more similar than even the Scottish and Irish. (Despite this fact, occupying colonists falsely maintained that Tutsis were “inherently superior to the Hutus,” based in part on the myth that “Hutu farmers, unlike their Tutsi counterparts, didn’t have much to do with cows.”)

Such comparative insights give the book a unique flavour and speak to Soderstrom’s background as an accomplished writer. Most of the time, it’s easy to relish this flavour. At times, however, it gets her into trouble — particularly when she compares lands that are less familiar to her.

In the case of Algeria and Tunisia, two neighbouring former French colonies, Soderstrom cleverly makes up for a lack of first-hand experience with a winding proxy narrative about wine exports and film. She contends, somewhat convincingly, that the differences in availability of their wines on the global market exemplify larger differences in how the neighbours have been both shaped and viewed by the outside world:

[Algeria’s] winemaking industry was first nationalized and then dismantled as the country became more aggressively Muslim. Suffice to say that only one Algerian wine was available in Montreal when I was working on this chapter.

There were four Tunisian wines in Montreal wine stores, however, reflecting both the more secular nature of the country today, and its concerted attempt to expand its exports in the aftermath of the Arab Spring.

Soderstrom deploys such anecdotes not to paper over a lack of observational data but to augment it in surprising ways. Yet it doesn’t always work, especially as she clumsily considers the suicide bombers in Gillo Pontecorvo’s acclaimed film The Battle of Algiers.

While Soderstrom’s narrative technique has its ups and downs, it’s her inconsistencies that prove most challenging. When writing about Algeria, for example, she attributes its education system and its treatment of women to colonial history, while excusing the role of religion. Elsewhere, in her very strong chapter on Scotland and Ireland, she emphasizes the role of religion, specifically the rise of John Knox, while downplaying any colonial influence. A more consistent structural and analytical framework would have helped to organize her chapters better and guide the reader.

Nonetheless, Frenemy Nations brings a novel perspective on ten corners of the world as Soderstrom gamely attempts to help us understand what can unite and divide close neighbours. Indeed, it is a most Canadian approach, focusing on the small idiomatic differences that distinguish one group from another.