On March 28, 2007, the Canada Council for the Arts celebrates its 50th birthday. The LRC has been a grateful and happy recipient of Canada Council funds for many years, so we would like to mark the auspicious occasion with a commissioned work of art. In search of creative inspiration, we turned to Vancouver writer Bob Robertson, member of the famed comedy group Double Exposure, for a story.

I sat beside a very excited man on the plane yesterday. Long before the trolley arrived, selling us soggy vegetarian wraps for five dollars, he gleefully uttered, “I got my cheque from the Canada Council for the Arts!” And he waved it under my nose as if it might smell good (compared to the wrap, it wasn’t bad). “Congratulations,” I said, “and what will you do with this money?” “I’m mounting a musical,” he proclaimed. “The ‘Winnipeg Riots’ for hand puppets accompanied by a harmonica.” The man in the seat behind us put down his copy of Atlas Shrugged, stuck his nose through the crack and growled, “Damn government, wasting hard-earned tax dollars on crap like that.”

Well, despite the fact that I personally couldn’t see the appeal of the Winnipeg Riots performed as a sort of Bolshevik Punch and Judy show, I had to put the crank behind me in his place. After all, I, too, have tasted the magic elixir of government funding and was obliged, therefore, to come to its defence, especially on the 50th anniversary of the Canada Council. I stood up and faced the antagonist in 45F.

“Sir,” I declared, “there are very few people on this aircraft who have not been touched in some way by generous grants from the Canada Council for the Arts.” Passengers, now bored with watching Mr. Bean remove his head from a turkey’s bottom, tore off their headsets to listen to my rousing speech. A man in 34C said he was a whittler from Whistler who sold miniature Sasquatch figurines to the après-ski crowd and couldn’t have done it without his grant. A woman, lined up for the washrooms, thanked the Canada Council for supporting her career as a pianist at murder trials, soothing the jury with a medley of Canadian favourites during the ten-minute recess.

“Understand,” I said, “without the Canada Council, there would be no Canadian symphony orchestras, ballet companies, opera performances, plays, books or paintings. So,” and I turned back to the sourpuss in 45F, “what’s your problem?”

“They turned me down,” he mumbled. “I wanted two thousand dollars to buy a mascot costume and become ‘Bucky the Funeral Beaver,’ encouraging mourners at funerals and giving out maple syrup. I thought it was a brilliant idea. They said no. Damn government.”

“Ah,” I said, “then you see, the Canada Council for the Arts is not only very generous, but very, very wise.”

Bob Robertson is a Vancouver writer and member of the comedy group Double Exposure. 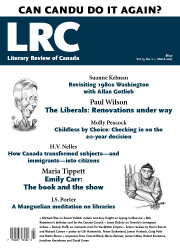