The Decline of the Hollywood Empire

One need not venture far into The Decline of the Hollywood Empire before stumbling across the first exclamation mark. It is right there, at the bottom of the first page of chapter two: “Digital distribution,” writes author Hervé Fischer, “will end this archaic system of distribution and hasten the decline of the Hollywood empire: two giant steps forward for film in one fell swoop!”

If this is true, the excited punctuation is wholly warranted. The mere idea of the collapse (“imminent” and “inevitable,” apparently) of the planet’s mightiest pop cultural apparatus evokes images worthy of the kind of apocalyptic spectacle Hollywood has been trading in since D.W. Griffith hired his first elephant wrangler: walls crumbling, skyscrapers toppling, seas rising, ships sinking, great cities consumed by conflagration—the whole judgement-day, world’s-end, made-in-California, Day of the Locust shebang.

Like most people who have been prophesying Hollywood’s fall since C.B. Demille was in junior-sized jodhpurs, Fischer—a philosopher, multimedia artist and holder of the Daniel Langlois Chair for Fine Arts and Digital Technologies at Concordia University in Montreal—sees the prospect as a cause for celebration. Ergo, all those excited exclamation points: “Marketing and promotional budgets for A-movies are as staggering as those for the productions themselves!” he exclaims by way of noting just how insanely cost-inefficient current mainstream Hollywood production practices are. Yet, at the same time, “movie-making is a license to print money, which the majors don’t want to let expire!” Yet what is the average cost of your run-of-the-mill blockbuster, as of 2002? “A record $102.8 million!”

While not always quite so breathlessly, doomsayers have been bellowing through the Hollywood hills for years. Clearly, there’s something about this industry, which has held the planet in its twinkly thrall for almost a century, and which has transformed so much, that summons wishful thinking of the deathly variety. Artists would like to see it suffer and die for its philistinism. Small businesses want it dead for its muscular monopolism. Non-American film makers would kill it for killing non-American film industries. Minorities loathe its stereotypes. And really: who wouldn’t like to see Tom Cruise counting his change at the 7-Eleven?

Fischer’s slim polemic, which was published in French in 2004 and translated into English in 2006, is steeped in the spurned lover’s pain. “There are two Americas,” he clarifies. “The creative one that we love … and the imperialist one we love less.” (That “we” is revealing. You talking to me?) Indeed, when it comes to citing examples of films and film makers that the author holds as models for potentially promising cracks in the system, his examples are not that far from the middle: the long-redundant Woody Allen is “the symbol of independent film, a unique anti-star who has rejected the Hollywood studio system.” (He is? Hasn’t the studio system rejected him?) The Matrix, which has so far spawned two sleepy hundred-million-dollar-plus sequels and a brisk business in merchandising, “will also go down in the history of this return to the original, fantastical spirit of film.” Michael Moore’s Fahrenheit 9/11, the most blockbustering, multiplex friendly documentary made prior to the long, profitable March of the Penguins, even gets its own exclamation point: “It beat documentary sales records in every country, from Great Britain to Cuba, the latter of which showed a pirated, subtitled version in 120 theatres and on television four weeks after the movie’s release in the United States, with a glee we can only imagine!”

If I seem to stress, unfairly perhaps, Fischer’s taste in movies—he also praises, of all things, Steven Spielberg’s flair for “naturalism”—it is not simply because my enthusiasm is less than his for Woody, Mike and The Matrix. It is because his book is about technology—specifically about how “the digital revolution tolls the bells for the empire”—and when reading about either the technology or business of movies, I am likely to slip right off into oblivion without having some real movie references as a form of intellectual purchase, no matter how many exclamation points may spike up the prose. These are matters that matter to me only insofar as they inform what is actually on screen.

Thankfully, Fischer reveals that they do inform what is on screen, although perhaps not enough to save the book from frequently reading like a digital media convention catalogue: “HD, as defined and adopted for television in 1999—HDTV—refers to the SMPTE standard of 1920 × 1080 pixels. In reality, HD is more commonly in the order of 1280 × 1024 pixels, what is referred to as 1K. In fact, a properly adjusted digital image of 1280 lines offers definition that is comparable to that of a standard 35mm print, which is in the order of 1920 × 1080 pixels.”

Sorry? Did you say something? If this is the discourse of the coming digital revolution, wake me when it’s over. But when it is over—Fischer gives the smoke a decade or so to clear—we may well find ourselves on a vast and open new frontier: the post-celluloid era.

For here is the crux of Fischer’s argument. Film is a 19th-century medium, projected by a contraption that fires beams of light through a strip of perforated celluloid as it runs at a regulated speed from one reel to another. Despite the fact that this technology is antiquated, expensive, damaging and ungainly, it remains the operative form of distributing and exhibiting movies for the Hollywood-dominated commercial mainstream. And this for a simple, vaguely sinister reason: as long as the standard exhibition format for Hollywood movies remains 35mm film, the industry maintains its monopoly over the multiplexed middle. All other formats, no matter how much more cheaply produced and disseminated, are closed out and marketplace dominance is assured.

Here are the consequences: movies have become more expensive, requiring a tighter hold on the global market to make a profit. As they have become more expensive and more global, they have necessarily become blander and more disposable: the only other products that sell as readily in Singapore as they do in Saskatoon are probably Big Macs and diet cola. Promotion costs now almost equal production costs, the inevitable result of making movies that require an enormous opening weekend return on their investment to turn a profit. (And who has the energy and intestinal fortitude to line up opening night? Teenagers.) This is why most of the people on the planet can now enjoy the same new talking baby dinosaur sequel on exactly the same day, why the same six movies are playing on screens in virtually identical multiplexes from here to Bangkok—and this is why, not to put too fine a point on it, most Hollywood movies today suck like the retreating tide preceding a tsunami.

So there is a connection, loath as someone as technophobic, numerically challenged and content oriented as I am might be inclined to admit it. Technology plus economics equals the current sorry state of the mainstream cinema.

But this is changing, as The Searchers’ Ethan Edwards might put it, as sure as the turnin’ of the earth. Digital, which eliminates celluloid and thus the huge production, promotion, distribution and exhibition costs, is the rampart-storming battering ram of the empire-collapsing revolution. It will democratize the form, open the floodgates of access, reinvigorate the art, revitalize national culture and restore the cinema to what Fischer, paraphrasing McLuhan, calls “the magic lantern of the imagination.”

In Fischer’s scenario, the Imperium of Hollywood has been struggling to keep digital from penetrating its walls, but the barbarian flood is about to breach: “With the advent of digital distribution, the film industry will fragment, diversify and take root again in national cultures,” Fischer concludes. “Logic is not on Hollywood’s side.”

This too may be so, but logic, especially in this most whimsical of spray-and-pray industries, has never held much sway. Surely logic would have dictated that Hollywood’s decline would already have transpired. Already, the American mainstream movie industry has defied logic by surviving, against such other thought-to-be-catastrophic developments as sound, anti-trust legislation, TV, video and the massive decline in attendance that occurred first in the early 1950s and then in the late 1960s. Didn’t happen: in each case, the industry recovered with new muscle and even deeper pockets. Take DVD, the first major incursion of digital technology within the distribution market. Thought as recently as just a few years ago to mark the coup de grâce of the theatrical market, it has—against all logic—proven the opposite. Even with the price of the average DVD hovering within a few dollars of a multiplex ticket, people are still “going to the show” in droves. If anything DVD seems merely to have stoked the appetite for the theatrical experience, at the same time boosting Hollywood revenues for ancillary profits to heights that make the videocassette market (also thought to mark a death knell) look like small change.

While there is no doubt there are major changes afoot, and that these changes, whether they are based in digital production, distribution or exhibition technologies, represent seismic shifts for the movie industry, it is far from a done deal that they will incur Armageddon for Hollywood.

Like many forecasters of the cultural future, Fischer notes the mind-bending recent changes in movie consumption habits—DVD, downloading, pay-per-view, massive home theatre systems—to which he might now add iPods, cellphones and other handheld wireless gizmos. But does this really portend an end to Hollywood hegemony or a mere digital dispersal of its influence? Certainly it indicates that the theatrical experience is, more than ever, merely a kind of trailer for the multiplying ancillary markets, which in turn implies the inevitable deterioration of movie going as a collective event. As cheek moistening as this news might be for those dwindling numbers of us old enough to remember the ancient ritual of going to movies in sticky-floored single-screen palaces, it hardly marks the last gasp of the popcorn empire. On the contrary, there are more places than ever to dump the junk.

At best, digital technologies will facilitate at least part of what Fischer is predicting: more movie theatres, more low-budget art movies and documentaries, and a return of something resembling repertory theatres, robust national cinemas and artist-driven productions. If anything, the future will force a compromise, a digitally driven market of more diversity and choice. And that, given the resoundingly multiplexed, monopolistic dreary mainstream recent state of things, is revolution enough. Better than nothing, it’s a start!

Geoff Pevere’s latest book is Gods of the Hammer: The Teenage Head Story (Coach House, 2014). He is the program director of the Rendezvous with Madness Film Festival in Toronto and is currently at work on a book about the mythology of rock music. 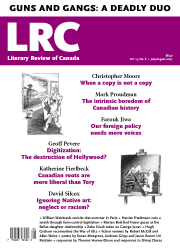