He might have given too much
had the crow at dawn not reminded
that saving a little for the next day
is how it’s always been done.
He held back.
Held back when seed casings withered
to let the real stuff out.
The sun clamped the sprout heads,
forceps drawing matter into bright vacuum.
He held back when letters came from the bank,
wanting to slug the mailman for saying,
“Can’t be good news everyday, you know.”
As if he made the news.
Adding, “Don’t kill the messenger”
to the weigh of foreclosure.
The envelope mined the valleys between his calluses.
He left blood webs on the mortgager’s pen.
This day was given for one more roll at good luck.
Horse-hair charms like Christmas ornaments
strung along fencing, swept curses from the air.
He hoped.
And he held back when the rains did not.
Too much necessity pooling
in serious knots along the furrows.
And again, when rain forgot what it was about
and settled in mist over jungle hills to the south,
letting earth become powder, he held back.
Beanstalks stayed mum about secret destinations.
Cloud bellies, just far enough from earth to be alien,
were the untouched goal, a target for ambition. 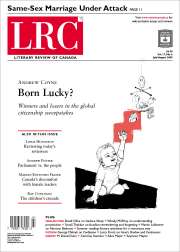