When Alice Munro’s recent collection, The View from Castle Rock, appeared in 2006, some of its reviews had an intriguing echo of the critique Willa Cather received from Granville Hicks and Lionel Trilling in the 1930s. These two titans aimed gloves-off assessments at Cather even though she was arguably the leading American novelist of the 1920s. Hicks accused her of having “fallen into supine romanticism because of a refusal to examine life as it is.” Trilling wrote that it “has always been a personal failure of [Cather’s] talent that prevented her from involving her people in truly dramatic relations with each other.” Cather’s response, a feisty and pointed collection of essays titled Not Under Forty, did not prevent Hicks’s and Trilling’s critiques from having staying power: Cather’s art was familiar in the public mind and not, emphatically, what they felt was needed then.

This is similar to the reception given to The View from Castle Rock. Wrongly assuming that this would be Munro’s last book, Stephen Henighan, writing in the Times Literary Supplement, surveys Munro’s career, damns with faint praise, niggles over Canadian references and concludes sadly that the collection’s two “best” stories are “not the ending for which Alice Munro would have wished.” Likewise, in a 2007 essay entitled “The Problem with Alice Munro,” Philip Marchand asserts that Munro’s “problem” is that “she has been so true to the world she has chosen to depict.” He writes, “The horizons … are uniformly low, due partly to the absence of characters whose education, experience and character might enable them to expand those horizons.” Noting “the sad paltriness of her world,” Marchand wonders if “the limitations of her world have to correlate so closely to the limitations of her art.”

While Munro’s recent Man Booker International Prize—now foremost among the many attentions she has garnered abroad—makes such Canadian considerations seem, well, so provincial, their existence might also be seen as a key reckoning of just how far Canadian writing has come during the span of Munro’s career. Her life as a writer in this country is in many ways an allegory of Canadian publishing since the Second World War—the CBC, small and commercial Canadian magazines in the 1950s and ’60s, a first book with The Ryerson Press in 1968, second and third books with McGraw-Hill Ryerson, a move to Macmillan to work with Douglas Gibson and then, following him, to McClelland and Stewart with The Progress of Love, the many books since. And during the late 1970s, stepping out with the New Yorker and Alfred A. Knopf came real and deep international attention. “She’s our Chekhov,” the American writer Cynthia Ozick famously proclaimed. “Ours,” you say? That the critics I have noted feel free to complain of Munro’s limitations—however tentatively—is another indication of the strides Canadian writing has made during Munro’s career. Her writing is too familiar, however seamless. Nothing surprising here. Quite naturally, they want to move on.

There are darknesses everywhere: a horrific violence occurs within the first pages.

Too Much Happiness is Munro’s 13th collection. All of its ten stories have been seen in the New Yorker or Harper’s already. The long title story, “Too Much Happiness”—stunning and shining—appeared in the August edition of Harper’s. Consistent with her practice, all have been revised for Too Much Happiness and one, “Wood,” her fifth New Yorker story, published there in 1980 and uncollected until now, has been added to and reshaped—unsurprising from an intuitive artist who never feels her stories complete.

Throughout Too Much Happiness echoes of earlier stories abound, and there are darknesses everywhere: a horrific violence occurs within the first pages; there are random, accidental and premeditated injuries and deaths; a husband dies suddenly, collapsed in front of a hardware store; an adolescent child disappears, never really to be re-found; another narrator recounts the life-affecting effects of his facial birthmark. Munro never repeats earlier stories: she extends, she probes, she develops. She does so now from the perspective of a person who has lived and has thought deeply about what she has seen and felt. “I am amazed sometimes to think how old I am,” she begins “Some Women.” In “Fiction,” one of the Harper’s stories and reminiscent of Munro’s important early “Material,” a young—perhaps too young—writer, a woman whom the protagonist knew and taught music as a child publishes a book of short stories called “How Are We to Live.” That title, its ironies abounding, might well be taken as apt description of Munro’s entire oeuvre. How, indeed? Through fiction and through believed personal fictions—what we know, what we remember, what we choose to believe, what we think we know.

The answer, for Munro, lies in writing stories. As she has asserted, she wants always to discover “the rest of the story” herself. Meditating on such matters in the midst of this story’s details Munro knowingly writes her character’s realization of what is happening: “here was where the writer would graft her ugly invention onto the people and the situation she had got out of real life, being too lazy to invent but not to malign.” The core incident in the story happened years, marriages, lives away. But there it still is, glowing with meaning through both memory and made fiction. Tellingly, Munro’s protagonist notes that “How Are We to Live” is a “collection of stories, not a novel.” This fact “seems to diminish the book’s authority, making the author seem like somebody who is just hanging on to the gates of Literature, rather than safely settled inside.” So has Munro been seen throughout her career. Just short stories. Like Chekhov.

In “Face,” one of the several stories here capturing the sense of a whole life lived, the narrator returns to his childhood home, which appears to be in Goderich, intending to clean the place up, sell it and return to Toronto. Recounting the critical childhood events that animated his family relations—family and friends’ reactions to his prominent facial birthmark—he describes an especially vivid recent dream in which part of a poem by Walter de la Mare, a poem he does not know, is recited to him by an unknown person who may be a long-gone childhood playmate. This episode confirms his decision to change his plans and stay in the old place. He thinks: “Something happened here. In your life there are a few places, or maybe only one place, where something happened, and then there are all the other places.”

Munro well knows this, having herself returned to Huron County in 1975 to start a new life at home. That return in many ways made her art, as she acknowledges. But as if to invert present expectations—that she offers “only” the Huron County culture of which Marchand complains—Munro closes her new book with “Too Much Happiness.” As with Cather’s turn to a different historical era, Munro’s too takes a turn toward something utterly new: it is a detailed telling of the final weeks—in 1891—in the life of the well-known mathematician Sophia Kovalevski. It is stunning and shining, but it contains no mention of Canada or Huron County, nor has it any of the character types we have come to expect from Munro. Instead, toward the story’s end we see Kovalevski—little more than 40, ill and taken to her deathbed—murmuring “Too much happiness” and thinking about a story she planned to write: “Her hope was that in this piece of writing she would discover what went on. Something underlying. Invented, but not.” Exactly. The discovery of lives inside an inner place. Like Munro’s, like Chekhov’s. Never too much happiness in such writing. After all these years, Munro still surprises. No problem here.

Robert Thacker has been writing about Alice Munro since 1976. His critical biography, Alice Munro: Writing Her Lives, was published by McClelland and Stewart in 2005. He is the Charles A. Dana Professor of Canadian Studies at St. Lawrence University in upstate New York, near Ottawa. 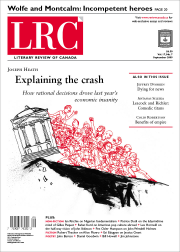