Lakeland: Journeys into the Soul of Canada

Ever since I landed in Canada, more than half a century ago, I have been looking for the book to send home to let my siblings (and now my nieces and nephews) know what kind of country I live in. Frustrated by my own failure to convey an idea of the new country adequately (a failure reflected in their puzzled responses), I looked for a narrative that would touch on all the things I wanted to tell them about, the landscape, the politics, the peoples and their ways of life—an introduction to the country, told in a personal voice. I couldn’t find such a book, and concluded that what I was looking for did not exist. It does now.

Allan Casey’s Lakeland: Journeys into the Soul of Canada explores what he calls Canada’s “lake-greatness” in a series of journeys that join together into one quest, into “the soul of Canada.” The journeys, ten of them, are to lakes or to regions of lakes, across Canada, journeys taken because there is nothing so quintessentially Canadian as a lake. Each lake provides a theme that Casey wants to explore—overpopulation (of lake shores), pollution, the beauty of Canada’s wild places, the gap between English and French Canada.

The story begins and ends in Emma Lake, Saskatchewan. Here the genre is memoir, the story of the author’s love for the place of his childhood. Mostly, he remembers, “we swam … even when it rained or the wind blew whitecaps we swam.” But this remembered paradise is now threatened by the number of people who want to share it. When Casey was a boy there were 1,500 cabins around the lake; now there are 3,000 and soon that figure will double again. “How many is too many?” is the question Casey lets the reader ask. (There is not a lot of preaching in the book, but some things are self-evident.)

Lake Winnipeg is the most eutrophic of the world’s major lakes.

From Saskatchewan he moves to Manitoba, along the way pausing to write a small essay on the man known as Grey Owl, of whom he is deeply respectful. Archie Belaney he knows was a “hard-drinking, knife-throwing cad,” but Grey Owl, the name he gave his invented new identity was a man “who changed the way people felt about nature,” a man who wrote lovingly about the wilderness, as Casey does throughout. Here Casey makes the point that many English boys grew up then dreaming about coming to the Canadian wilderness to reinvent themselves.

The theme in Manitoba is pollution. Lake Winnipeg is the most eutrophic of the world’s major lakes, threatened by an oversupply of nutrients, and there is a great need to understand the problem and deal with it. The provincial and federal authorities seem to be in a muddle—over jurisdiction among other things—but some hope is offered by a group of scientists who have recruited concerned citizens into a “Lake Winnipeg Research Consortium” to respond to the problem. Unfortunately it does not sound like enough.

The story leapfrogs to Nova Scotia to visit Bras d’Or Lake. Here the problem is the threat of underpopulation as the young of Cape Breton leave the province in search of work in the oilfields of Alberta. But a reversal may be helping to counter this. Now, in Nova Scotia at least, the same cheap air travel that offered affordable vacations in Europe, taking away the traditional customers of Canada’s grand old summer hotels, is bringing new visitors from crowded northern Europe, looking for their own summer cabins.

Newfoundland has plenty of lakes, but there they are called ponds, and, as one native says, somewhat dismissively, of Casey’s search for the lakelands, “in this province, we face the sea.”

In the next chapter, Lake Athabaska, on the Alberta/Saskatchewan border, has become a winter road, the ice so thick it will bear a truck. Here Casey raises the issue of the aboriginal people. He does not avoid the problem that the Indians have become to the white settlers, or the problems that the white settlers have brought to the Indians. He notes that some of the reserves are very well run as he relates with very little comment the familiar story of reserves mismanaged by unscrupulous elders, of the abuses of drugs, alcohol and other substances. Casey simply confirms that it is a miserable situation that doesn’t seem to have an easy cure.

After an excursion into the Rockies, more specifically, Lake Okanagan, British Columbia, a beautiful area but one where the natural resources are under threat from the competing demands of the leisure industry and agriculture, it is back to Lake of the Woods in Ontario. A wonderfully named chapter, “Riding in Boats with Women,” is a lively account of some women who have looked after Casey on his way through. (Regarding Ontario, I had hoped for a look at some of the inland lakes on the English River system where I once reinvented myself as a fishing guide. That fishing camp is empty now, a victim of the poisoning of the river by the mercury dumped by the pulp and paper industry, as movingly described by Bob Rodgers in his essay in the January 2009 issue of the LRC.)

The next stop is Lake Nipissing in Ontario’s near north. Here he comes close to home, and I can offer my own experience in happy contrast to the story of Emma Lake’s over-population. Forty years ago two of us built a cabin on a river that flows out of Lake Nipissing. When we built the cabin there were no cottages visible from our dock. Since then only one new cabin has appeared, and those people never seem to be around. I keep my fingers crossed and the location of the cabin secret.

Now Casey journeys to Quebec, to Lac St. Jean and La Grande Traversée, the annual swimming race across the lake. The other culture has appeared, more vivid than I have ever seen it before. This is not Montreal, or Quebec, or a drive along the St. Lawrence. This is French Canada at play, and therefore at home. Here 10,000 people from the villages around the lake dine communally and afterward stroll along the lakeshore. Casey calls Lac St. Jean “the blue heart of French nationalism,” Lakeland in Quebec.

Politics, of course, creates the subtext here. These people are not fond of Trudeau, and anglo Canadians tread carefully and politely. They are courteous to strangers, but this party is a family event and after Casey is formally introduced he is ignored. Here the anglo Canadians are known as “les autres”; other Québécois they call “nos autres”; only their own people, the people of the lake, are simply “nous.” I could explain the two nations to my family for a week without making it so clear. Casey pays them homage: “These Quebecois had a richness of community distinct in North America. I envied them their cohesive, four-hundred-year-old culture, their mature film and television industry, their literary life, their obscure water sports—all geared to their unique tastes. They were complete unto themselves.” The next generation, he finds, does not have such a fierce need to assert its separateness, but Casey seems to feel that as long these lake people insist on speaking French, to each other and to les autres, this world will not dissolve.

Allan Casey has done a fine job of imaging the land he was born in and remembers and the land he has travelled to discover, celebrating the joys of being Canadian and highlighting some of our problems. Lakeland is a book to give to every visitor from the old country, whatever country that might be.

Eric Wright has lived as a student, teacher and writer in three provinces. One of his novels, Moodie’s Tale (Key Porter, 2002), is about a young Englishman in the Canadian bush. 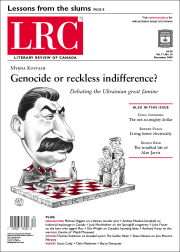