I wonder if there exist, anywhere, any writers who feel that they are full-throatedly a part of their time and place.

I remember, when I was much younger, meeting Michael Ondaatje at a party. At the time, he was absolutely my literary hero—this was just before the film of The English Patient came out—and I asked him what I should read to become a better writer. He did not give me the name of the latest hot writer from Brooklyn or London, or one of his old friends like bpNichol. He told me to read George Herbert, the brilliant, 17th-century calligrammatic poet.

Most writers, I think, live most of their lives with the George Herberts of the world, the weird dead people. That’s not ghoulish or Romantic. It is a basic material fact of writing. As is the delay inherent in publishing, the other basic fact of the writer’s life that breaks us from our time. It is both a truism and a writerly affectation to say, “By the time you read anything I have written, it is dead to me.” But usually it takes three years to move a novel from a desk to a bookstore. How is it possible to be timely under these conditions?

Not that I see being out of time as a weakness. Far from it. It is what distinguishes literature from other arts. Damien Hirst three years ago was the moment. His moment has already passed. Lady Gaga is now: she is of this moment. It will probably last another year at the most. And then they are vanished. As Don Quixote says, with his dying breath, “In last year’s nests, there are no birds this year.” But writers do find their birds in last year’s nests, and lay their eggs in tomorrow’s nests. We write because, in a sense, we are already dead.

In a sense, writerly brokenness is merely an extension of a general condition. Everybody believes that the times belong to somebody else. I think about the widows who walk along College Street like desolate crows. They look at the 20-year-olds, and they think the times belong to a pack of depilated sodomites. And of course the 20-year-olds, or most of them, believe that the world belongs to their elders, to the powers-that-be, to all those people who are going to deny them a job when they graduate.

Who can stand people who are comfortable in their own time? You know who is comfortable in our times? Those kids from Jersey Shore. They want to look the same as everybody, they want to be the same as everybody, and they succeed. When all you want to do is get drunk, screw and buy clothes, life is pretty easy. Bound in the nutshells of themselves, they are the kings of infinite space. To be of one’s time is to be something like a beast or a machine. Now that I am in my thirties, I regularly meet coke-huffing, gambling-addicted bankers. They are of their time. Completely of their time. I envy and despise them in equal measure.

Writing is not just being out of time, though. Writing is also about being out of place. I happen to be standing in Canada. How relevant is this fact? I am tempted to answer, “not much.” The material conditions of writing have not fundamentally changed since the Anglo-Saxon poets or the West African griots or the original Japanese novelists first started producing pleasurable words. You sacrifice your youth for mastery of the craft. You spend your middle age in vagabondage and insecurity. I don’t know what happens in old age, but I don’t really want to think about it. You get rejected a lot. My first book was rejected by one publisher after it had been positively reviewed in the New York Times. It had taken the publisher so long to get to the manuscript that it was already in paperback by the time they decided they did not want it. Alice Munro could not get published for a decade (my father-in-law, then a magazine editor, turned her down once because he thought her writing too rural). Virginia Woolf rejected Ulysses. The Sound and the Fury was rejected 27 times. Melville gave up because he stopped being published, leaving The Confidence Man and Billy Budd in his desk drawer. Daniel Defoe could find no one in London to take on Robinson Crusoe; the English novel was literally being born and publishers chose to ignore it. He had to self-publish. Daniel Defoe. So did Walt Whitman. Nobody—nobody—knows what’s going on.

When Alice Munro won the 2004 Giller Prize, her victory speech recalled rejections from the beginning of her career: there she was on TV, 73 years old, utterly triumphant as a writer, kvetching about 40-year-old slights. “I never read Canadian authors,” she recalled being told. “I never read fiction—I can’t get what it’s about.” These petty little tortures are true for every writer of every time and of every place. And being a Canadian writer is not so different, except that writing matters more in small countries, and Canada is a small country.

What is going to happen when we start to integrate the history of the world’s styles into our writing?

Literature has to be a national affair. It comes from nations. And we belong to Canada, which is a very peculiar nation in a very peculiar position. Perhaps even in a unique position. Canada exists between the United States and the North. By the United States I mean New York and Los Angeles and Washington and San Francisco—the global capitals of money, culture, power and technology respectively—and by the North I mean the impossible nothingness of our silent masses. We are stuck between the devil and deep blue sea, between the world and all its demonic temptations, sex, music, the transmorphic power of money and the North, which is death, which is the wasteland, which mocks New York. You cannot pretend in the middle of a northern storm when the snow seems to cover the entire surface of the earth that the new Vampire Weekend matters. You must face, in a way that most cultures other than desert cultures never have to face, the reality of total death, ultimate death, the evidence of meaninglessness that extends everywhere to the horizon, the oblivion that attends on all human action.

Canadians are broken between these two realities. Politically this situation can be, at times, disastrous. But in writerly terms, it is luxurious. We live on the edge of the world. It gives the best view. The possibilities for writing in Toronto right now seem boundless to me: we have barely scratched the surface of our radical multiculturalism, barely touched the potential. All we have done so far is write 19th-century English novels about the various ethnicities that have congregated here. The result has been the masses of pedestrian exotica that win literary prizes. But what is going to happen when we start to integrate the history of the world’s styles into our writing? There have been brief flashes of it: A.M. Klein, thinking of his Montreal childhood, turned to Talmudic glosses; Michael Ondaatje, in love with a midwestern woman in Guelph, turned to the Sigiri Graffiti. Will these sparks ignite into a bonfire of the world’s vanities? I don’t know, but I’m excited. I am genuinely excited.

Our brokenness in time and place is our greatest strength. “You shall love your crooked neighbour / with your crooked heart,” W.H. Auden wrote. Nowhere and no time is more crooked than here and now.

Stephen Marche is a novelist and essayist, as well as the host of How Not to F*ck Up Your Kids Too Bad, an audio series. 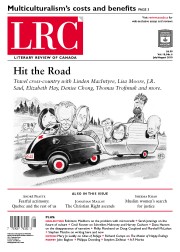