Painters Eleven: The Wild Ones of Canadian Art

Fashion—be it in clothes, in music or even in art history—is a curious thing. Mapping the inevitable ebb and flow of an idea might seem an all too predictable enterprise; yet it grants those so inclined the opportunity to take stock of the apparent fickleness of human nature. An idea’s upward trajectory—from its radical newness to critical acceptance, followed by widespread use and eventual absorption into the popular imagination—is offset by its inevitable descent into obscurity, or worse, ridicule, loathed for its conventionality and blamed for all the sins supposedly committed in its name.

Ultimately, that neon bathing suit, bob cut or abstract expressionist painting becomes so unfashionable that it turns a corner and becomes positively retro. Embraced by tastemakers as tastefully anti-tasteful (and thus once again viable to those who view anything really unhip as potentially hip-in-waiting), it rises once again to cultural significance. (Truth be told, this is one of the reasons I have kept all my Queen concert t-shirts from the ‘70s: I am convinced it is just a matter of time before my genius is apparent to all.) At any given time, there are a myriad of ideas, and the objects, images and sounds that signify them, coming and going on our contemporary playlist, moving up or down on the fashion barometer, dying for just one more chance at the spotlight and all too ready to be recycled for public consumption.

Take, for instance, abstract painting of the ‘50s—bad-boy and angst-ridden. If the end of the last century was characterized by the clear and imminent demise of abstract painting as a topic of critical import or even polite conversation, then the start of this new millennium seems to suggest just the opposite. It appears that splash, slather and muck are back! The indicators seem conclusive: young artists in this country are re-engaging with the conventions of abstraction; critics of note appear to view it as a viable strategy; and commercial and public galleries are once again headlining painters and highlighting collections that have, for almost 30 years, sat in dark storage units gathering dust.

The Painters Eleven formed for the most Torontonian of reasons: landing shows, getting profile and selling art.

Perhaps the most obvious reassertion of modernist abstraction into public consciousness is the recent historical re-examination of mid-century Canadian painting in print and in exhibition. The clearest indication of this shift is the publication of Roald Nasgaard’s monumental survey Abstract Painting in Canada in 2007. It was quickly followed by Nasgaard and Ray Ellenwood’s comprehensive exhibition and catalogue The Automatiste Revolution that toured to the Albright-Knox gallery in 2010. Now, the Toronto-based Painters Eleven of the 1950s and ‘60s have been given their due in a new book by Iris Nowell, titled Painters Eleven: The Wild Ones of Canadian Art.

In part, the publication of these sizeable tomes suggests that the time was right (and a waiting audience was there) for a re-examination of mid-century abstraction after years of palpable indifference, from both commercial galleries and public institutions. What remains to be seen is if these rediscovered movements, with their dogged hyper-subjectivity and certain whiff of nostalgia, will retain any serious critical afterglow once intellectual fashion and fickle taste have moved on to newer digs.

The established tale of mid-century abstract painting in this country relies on two parallel narratives, each originating from either side of Canada’s two solitudes. In Montreal, it was the story of the Automatistes, of Borduas and Riopelle, Barbeau and Françoise Sullivan. In attitude, the movement tilted decidedly in the direction of Europe and surrealism, and with all the avant-garde accoutrements one would expect to see in any collective daring to call itself a movement. It had a blustery manifesto (Le Refus global) with radical proclamations, an alpha dog (Borduas) with a group of adoring cohorts from a variety of disciplines, and even a bit of anti-clericism thrown in for good measure. It was in essence a cultural movement, paralleling the rise of nationalism and the anti-Duplessis sentiment in Quebec. And like just about every other art movement with an agenda, its mercurial ascent was followed by an almost immediate dissipation of energies, as the main protagonists shifted their attention to bigger ponds, like Paris or New York.

The other dominant tale of abstract painting in Canada at midcentury is that of the Painters Eleven and the realities of making art in Toronto. Here, context is everything, as the Painters Eleven essentially formed, not around a political manifesto or an intellectual rallying cry, but for the most Torontonian of reasons: landing shows, getting profile and selling art. The cast of characters included some of the most well-known painters of the period, including Jack Bush, William Ronald, Harold Town and Jock Macdonald, and like the city itself, it had the habit of bowing before the aesthetic altar of all things British and American. This was a Toronto, not of the commercial galleries and artist-run centres of today, but of art clubs and watercolour societies, endless landscape paintings and the looming spectre of the Group of Seven. Innovative art—especially work concerned with prevailing ideas around abstract painting—was without champions or venues, and so eleven like-minded souls (nine men, two women) banded together, more a matter of survival and mutual support than any kind of revolution.

Iris Nowell’s Painters Eleven: The Wild Ones of Canadian Art charts the rise and fall of the group of artists through the lives of its major protagonists. There is a chapter devoted to each of the eleven members, with short sections interspersed throughout that provide some overall history and context. The structure of the book privileges the individual over the collective and, as the title suggests, anecdote over aesthetics. In many ways, the book reads as a kind of love story between the author and many of the artists she knew so well, and the stories (many of which Nowell, both as writer and as friend, experienced first-hand) are vividly and convincingly portrayed.

Here, the author’s keen representation of character and nose for the “good story,” a talent honed over the course of her long career in journalism, is in full evidence. For some of these artists, drinking (Bush), general outrageousness (Ronald) and screwing around (Tom Hodgson) are not tangential to the act of making art—they are at the very core of creativity. The result is a wonderfully rollicking read, a rich tapestry full of colourful characters and an endearing snapshot of the period and its proclivities. This approach is, however, a calculated risk in any serious book about art.

Nowell risks situating the history of the movement more in personal biography than in art.

In privileging anecdote over examination, and seeing personality as a meaningful gateway to meaning in a work of art, a very specific image of the group emerges. To our contemporary mindset, the seemingly contrived and strategic exercise of what can only be described as stereotypical bohemian behavior—from the likes of Ronald, Hodgson and Town, in particular—reads as both a predictable and an endearing acting out of certain modernist tropes: New York’s Cedar Bar comes to Toronto. There are, of course, exceptions to this well-worn plotline. Alexandra Luke, for instance, was a McLaughlin—yes, those McLaughlins—and, as a result, really couldn’t pull off the bohemian thing with much credibility. She painted, in luxury, in Oshawa. Yet Nowell also runs the risk of situating the history of the movement more in personal biography than in art. One of the great features of her book is the extraordinary number of high quality images she has been able to reproduce. But, when you line up the actual paintings against the “wild ones,” it seems clear that biography, while making for great reading, doesn’t always make for compelling art.

In her survey of the Painters Eleven, the author has made the strategic decision to cover the span of entire careers, rather than seminal moments of historical interest. In some cases, such as Jack Bush’s well-documented support from Clement Greenberg and his subsequent rise into the upper echelons of colour field painting, this decision only helps to reiterate the artist’s status as a seminal figure worthy of serious critical consideration. In others, as in the case of Tom Hodgson’s descent into kitsch representation (the mind-boggling inclusion of his portrait of John Lennon seems a particularly egregious act if the aim is to celebrate a distinguished body of work) or Harold Town’s bizarre hobby horse series, the strategy proves sadly diminishing. That people change and that there are better and worse, more and less relevant periods of work in an artist’s life, seems at once obvious and predictable. Very few artists are capable of being at the cutting edge of culture through span of a career, and most of us would happily settle for being relevant for one magical, fleeting moment. But in large survey books, it is hard not to compare and contrast (and judge winners and losers) when one scans the myriad of reproductions provided. The result is a nagging sense that it was less a movement than a historical collision of artists of varying abilities and relevance, of less historical interest as a group than as a confluence of a few very good painters in a marriage of convenience—brought about by a simple desire for venues, markets and recognition—for a few years.

Clearly, for both Nowell and many of the larger-than-life characters she describes, making art and “being an Artist” are inextricably linked in a way that today, after nearly 40 years of critical theory and its relentless attacks on authenticity and subjectivity, makes many of us of the newer, more cold-hearted and terminally skeptical generation cringe. Perhaps the critic Peter Schjeldahl said it best, when he commented so perceptively (and ambivalently) on the period and its ethos:

Art as substitute religion–and it was no less than this for Rothko, as for Mondrian–has disappointed us, and there is a general understanding, that artistic grandeur is not worth the terrible human investment required to attain it…Rothko lacked the wisdom of the seventies, which seems to be that belief in anything at all is messy and dangerous, and this does give us an edge on him.1

For those looking for a much needed critical examination of the art and its reception, the work will inevitably frustrate. The book is essentially a story based in history, not a historical examination and certainly not a work of criticism. Sadly, for the group, and its prospects at maintaining some historical legacy within Canadian art history, that critical history should have come first.

As an artist and writer, I’m quite convinced that people are infinitely more complicated than canvasses full of paint or the discourses that support them. What I’m less convinced about is whether biography tells the truth anymore (or ever did) or is simply yet another layer of contingency on the muddy path toward meaning.

In the end, I’m not sure that Nowell’s book will do much to convince those mysterious tastemakers that a full-fledged revival of the Painters Eleven is in the offing. But as a portrait of a period, a group of ambitious artists and an underlying, fundamental and unassailable belief in the redemptive power of abstract art, the book succeeds admirably. And hey, it never hurts when an art book is full of images of art! The collection of images alone makes it an essential reference for future scholars. It is now up to them to make the critical and historical case for the movement.

John Kissick is a painter and writer, and Director of the School of Fine Art and Music at the University of Guelph. 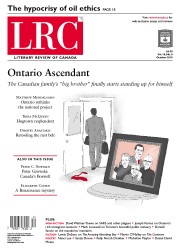