In 1989 I attended Toronto Harbourfront’s International Festival of Authors, where Mordecai Richler launched Solomon Gursky Was Here. After reading, perched on a chair behind a table stacked high with hardcovers, Richler put up with me, along with a few hundred others, telling him something wry aimed at opening conversation as he wrote his name on the novel’s title page. I made some stumbling comment about the raven pictured on the dustcover and my own last name, to which the author offered, appropriately, a blank stare. I had entered a Richler cliché: the naïf looking for acknowledgement and receiving not a thing in return. In Charles Foran’s biography, Mordecai: The Life & Times, the same scenario pops up at a book signing for Barney’s Version at the University of Toronto’s Convocation Hall. There, Foran tells us, a woman informed Richler, “I read your last novel, Solomon Gursky Was Here. It took me two years. WHAT A STRUGGLE!” Since such anecdotes abound among Canadians of a certain age interested in books, Richler’s biographers are up against a peculiar challenge: readers have often had a taste of the Richler persona, standoffishness mixed with impatience and embarrassment over the positions a successful writer finds himself in, in the process of shilling his books.

Richler’s last years, especially after the success of Barney’s Version, offered a remarkable turnaround. He became a beloved iconic figure; his crustiness and long-standing political incorrectness, in place before the term came into common usage, became desirable and admired to the extent that in Italy, following the release of Barney’s Version, the embrace of what the Italians called Barneyano took on a kind of national fervour. At home, Foran tells us, “he was now Mordecai, the most recognized literary figure in the country” (one might quibble with this, as one rarely does in reading Foran’s book, that Richler was number two in that field, the curmudgeonly Jewish voice juxtaposed with Margaret Atwood’s Ontario irony).

In exploring how this turnaround came about, Foran is up against the fact that other hardworking biographers have made it to the market before him. His book claims to be the most authoritative source; cover matter from Knopf’s copywriters insists that Mordecai: The Life & Times is “unauthorized, of course,” in an effort, one expects, to prevent readers from mistaking it for a family-managed inside job. But then it is characterized as the “first biography of Richler to be written with full, exclusive access to family letters and private archives.”

The voices of Richler’s immediate family are largely supressed until the book’s end, when Florence Richler is quoted at length, offering a moving and clear-eyed description of Richler’s final days. Much more is heard from the more familiar players in Richler’s family romance: his troublesome mother, from whom he remained estranged for much of his adult life; his self-effacing and picturesque father, to whom he grew close in his last years; the cast of disgruntled cousins, aunts and uncles from the large Montreal-based Richler clan who viewed their famous relative with suspicion and exasperation. Toward the end, Foran suggests, there was a kind of rapprochement. At the funeral of an aunt who had casually dismissed Richler throughout her life, the “Richlers were pleased to lay eyes on the famous—perhaps notorious—Mordecai again … even admitting that he had made the family proud.” But one senses that Schadenfreude motivated some of the would-be reconciliation as a nephew informed the clan, “He’s a sick man.”

This is a powerful case of revisionist historiography and legend making.

Richler’s ability to provoke, to polarize, throughout his career, is one of Foran’s main interests in Mordecai. He describes the early break with Jewish observant family life and with the daunting figure of his maternal grandfather, Yudel Rosenberg; and he accounts for how the novels preceding The Apprenticeship of Duddy Kravitz operated as all-out acts of rebellion and abandonment. The first of these, The Rotten People, which has remained unpublished, sits in the University of Calgary Richler archives, and Foran seems to have seen no gain in quoting from it.

Foran is careful in his use of the novels, sparing the reader plot descriptions and concentrating instead on how the work that lay behind the finished texts—the hard slogging of revisions, the pursuit of publishers and the need to make a half-decent living from a writing life—motivated Richler’s ambitious work ethic. In this, Mordecai is an instructive text for young writers on the nature of a creative career’s practical side. A novelist himself, Foran is attuned to the meaning of Richler’s lasting professional friendships, and to the undertakings he viewed as a kind of old-fashioned “scribbling,” which included freelancing as a reviewer, columnist, script doctor, tastemaker for the Book of the Month Club and essayist in an array of American, Canadian and British magazines and newspapers.

On these matters Foran’s book covers relatively new ground. There are instances when he tackles a subject that his competitors got to first, sometimes in greater detail. Joel Yanofsky, in Mordecai and Me: An Appreciation of a Kind, made good work of Richler’s farcical Prix Parizeau, an award given to “a novel or short-story collection published by an ‘impure’ Quebec writer.” Reinhold Kramer, in his Leaving St. Urbain, brought Yudel Rosenberg to the fore, considering the role of the scholarly grandfather who translated the Zohar into Hebrew and wrote influential Hebrew-language stories about the legendary Golem of Prague. It is with Rabbi Rosenberg, a man who died when Richler was four, that Foran’s biography begins:

Yudel Rosenberg wasn’t only the family patriarch … he was the rebbe, as much guru as leader of Montreal’s Hasidic community. They called him the Skaryszewer Illuy, the Genius of Skaryszew. He was a Ba’al Shem, a Master of the Holy Name. Scholar and author, teacher and mystic, Rabbi Rosenberg couldn’t walk down a street in the neighbourhood without people seeking a blessing for their child or a word of comfort for themselves. He couldn’t enter a synagogue without all present standing up out of respect.

This is a powerful case of revisionist historiography and legend making, which may distract as much as it reveals about the core of Richler’s life and art. In the 1940s and after, men like Rosenberg were becoming yesterday’s men all over the continent, falling into the shadows of a fast-assimilating community. And the young Richler’s insistence on snubbing his old world grandfathers is in no way singular, or a signpost of the young man’s Bildungsroman heroics. Far away in Vancouver, Jewish teenagers said see-you-later to old world parents and met friends for a cheeseburger at the Aristocratic on Granville Street; in Calgary, the freewheeling west made self-transformation the first, not the last choice for children of immigrants.

Canada, Richler warned interviewer after interviewer, was a backwater.

But in other ways Foran is revealing in his fierce engagement with the challenge of evoking the Montreal Jewish immigrant community of Richler’s youth. Here his novelistic skills come to the fore:

Horse-drawn wagons delivering coal and ice, dairy products and produce moved along the inside lanes of St. Urbain, a clip-clop in summer and a jingling of bells in winter, when runners replaced wheels. “Vadermelon!” the fruit man called out on hot days. Housewives addressed the milkman and iceman by family name; they were in and out of their apartments, sometimes daily, the latter obliged to make repeated trips up and down those staircases, pinching the heavy blocks with tongs. The ragmen who plied the alleys, their decrepit wagons pulled by scrawny horses, informing occupants in Yiddish of their interest in buying rags and bottles, generally remained nameless.

Foran paints a fine portrait of all that Richler the writer took a long hard look at and rejected. It was in Paris, Ibiza and London where the novels took shape and it was London where Richler made his breakthrough, in 1959, with The Apprenticeship of Duddy Kravitz, which was written in a London flat and published by the Budapest-born, London-based publisher André Deutsch. Canada, Richler warned interviewer after interviewer, was a backwater. The literary lions were elsewhere (Foran considers the early influence of such Canadians as Brian Moore, Mavis Gallant and Robert Weaver, whom Richler did admire).

This early tendency to tell anyone who would listen—CBC reporters among them—that Canadians should give up the good fight and simply join their more important southern neighbour, is an early provocation in the long line of Richler stands. Most interesting among these, and dealt with at length in Mordecai, was his gruelling battle with Quebec nationalists, which made him a favourite, even archetypal, target of separatists and a celebrity in a way that distracted him from his fiction work. These developments, Foran says, “left him drained.” When he was done turning his 1991 New Yorker article on Quebec’s language laws into the book, Oh Canada! Oh Quebec! Requiem for a Divided Country, he wondered “if he had best spent his time and energy on it. The book, expanding marginally on the arguments of the New Yorker piece, contained some arresting passages, but it was far from his best work.”

The end of the story, as Foran tells it, is a satisfying one. The last novel, Barney’s Version, was a major success, and Foran argues convincingly for it as a stylistic breakthrough, a great late step forward in an already impressive oeuvre. He is evocative, as well, in his portrait of the creative lives of Richler’s children, which in various ways mirror that of their father. Here Foran puts his intimacy with his subject matter to good use, as it becomes clear that his admiration for Richler is rooted in a respect for his subject’s idealism, which was expressed in the writing life, family life and in Richler’s forays onto the stage of cultural and national politics. 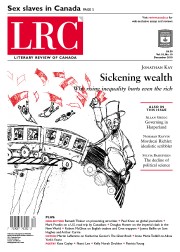