Halifax: Warden of the North

The Citadel has always dominated Halifax, casting quite a shadow over not only the city but also its history. In his classic study of Halifax, written in 1948 to commemorate the city’s 200th anniversary, Thomas Head Raddall saw the imposing fortress as a defining characteristic of the country’s largest Atlantic seaport. Like earlier chroniclers, Raddall presented Halifax as a “warrior city” known for its military and naval establishment and evolving through distinct imperial and Canadian stages of development. What he added was a colourful and alluring gallery of characters ranging from princes, privateers and soldiers to the “Brahmin” class of local aristocrats and assorted “riff-raff” on the waterfront. It was Raddall who, more than anyone else, explained Halifax to native Haligonians as well as to the wider world. Since then, Nova Scotia’s provincial capital has retained much of its “garrison mentality,” placing it outside the mainstream of Canadian urban development. While most historians and urban geographers, influenced by J.M.S. Careless, advanced the Canadian metropolitan thesis and explored successive waves of metropolitan dominance from Montreal westward, Halifax and the other East Coast cities were essentially left behind.

Thomas Raddall was a towering presence on the Nova Scotian literary scene for more than four decades. Born in Hythe, England, he came with his family to “small and depressing” Halifax in 1913, survived the famous 1917 Halifax Explosion, trained as a telegrapher and laboured as an accountant at Liverpool’s MacLeod Pulp and Paper Company. After being bitten by the writing bug in the late 1920s, he quit his secure job to become a full-time writer in 1935. He survived the 1930s and ’40s on the meagre royalties earned by writing novels, short stories and historical fiction. His fortune changed when McClelland and Stewart of Toronto took notice and began promoting his popular books across North America. Halifax: Warden of the North was an outgrowth of his ongoing research for the novels and turned out to be one of his two substantial historical works; the other was The Path of Destiny, a Canadian history text covering the period from 1763 to 1850. Raddall wrote history-themed books that people actually wanted to read for pleasure. By 1972, his total worldwide sales were a staggering 2.4 million copies and counting.

Last year Nimbus Publishing of Halifax decided to produce a new version of Raddall’s classic, tacking on three chapters covering the period between 1964 and 2009. They chose Stephen Kimber for the project, which made good sense. If Halifax today has a popular writer rivalling Raddall in his day, it would be Kimber, former director of journalism at the University of King’s College, and a best-selling Canadian author in his own right. His recent historical books, most notably Sailors, Slackers and Blind Pigs: Halifax at War and Loyalists and Layabouts: The Rapid Rise and Faster Fall of Shelburne, Nova Scotia, 1783–1792, have established him as a successful popularizer and vivid storyteller. 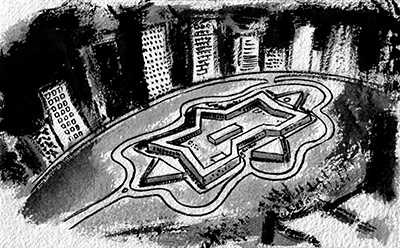 But revising Thomas Raddall’s Halifax: Warden of the North is a tall order, even for Kimber. Here is a book, going into its fourth edition, that has stood the test of time. The reason is deceptively simple: it was, and is, extraordinarily well written and spins the story of Halifax with considerable panache. Of the 41 original chapters, 20 dealt with the 18th century, reflecting Raddall’s fascination with the early period and his contention that Halifax’s basic character took shape before 1815. Unlike other Canadian cities, according to Raddall, Halifax did not emerge in response to trade and economic imperatives. It was more a creature born of military-strategic and bureaucratic factors. Since Britain was at war for two thirds of Halifax’s 18th-century experience, the town acquired a “garrison identity” reflected in its aristocratic pretensions, indifference to the rest of the province and resistance to social and political change.

Virtually everyone agrees that Halifax and Nova Scotia experienced its high point of development between 1815 and the 1860s. That period stands out as the commercial “golden age” before “wood, wind and sail” gradually gave way to full-blown industrial capitalism. The coming of Canadian Confederation coincided with a conjunction of external pressures, Canadian, British and American, propelling Nova Scotia reluctantly into a larger federal union and signifying a tremendous loss of autonomy and influence. The economic and political crises of the 1860s and ’70s, in Raddall’s view, virtually decapitated Halifax’s entrepreneurial class and that blow reduced the city’s commerce to “apathy.” Deprived of entrepreneurial spirit and energy, the city allegedly fell back upon its military establishment.

Thomas Raddall was a towering presence on the Nova Scotian literary scene for more than four decades. By 1972, his total worldwide sales were a staggering 2.4 million copies and counting.

While Raddall saw continuity in Halifax’s history after Confederation, Dalhousie historian David Sutherland has pointed out that revisionist academic scholars since the 1970s have tended to identify and highlight variations. Between 1871 and 1911, while Canada passed through an economic boom, the city’s population grew by only 58 percent, far below the national urban growth average, and Halifax fell from fourth to eighth place among Canada’s cities. From that time forward, visitors also began to describe the city as a quaint backwater. While the cold facts are indisputable, Raddall’s explanation of the decline has been seriously challenged. Revisionists have taken a broader, regional perspective and called into question the idea that the historic grip of the garrison mentality explained it all. Studies of Victorian Halifax, urban poverty, sectarian conflict, immigration and out–migration have filled in more of the historical context in relation to the whole Maritime region. In short, Raddall’s interpretation has largely been displaced, but the book still lives on in popular folk culture.

Comparing the three new chapters written by Kimber with the preceding sections is a jarring experience. Raddall’s whole perspective reflects the popular prejudices and prevailing values of early post-war Canada; his successor-author writes from a contemporary vantage point. The original book’s rather crude treatment of early Anglo-Mi’kmaq relations and the expulsion of the Acadians contrasts sharply with Kimber’s sensitive portrayal of the arrival of the Buddhists in the late 1970s and early ’80s. Halifax’s infamous black settlement, Africville, dismissed by Raddall as “a squalid shack town,” is viewed by Kimber as “a tight-knit community” where people looked out for one another.

Raddall and Kimber view the world so differently that the updated edition reads like an extended “he-said-she-said” sequence. The Citadel was, to Raddall, a symbol of military prowess; to Kimber it is the bulwark of resistance to overweening downtown development. Whereas Raddall was sympathetic to the establishment, Kimber is decidedly not. The Halifax dailies, clipped regularly and used enthusiastically by Raddall, are labelled the “Dennis papers” by Kimber and excoriated from the 1970s onward for their lazy, toady journalism. Both authors see Halifax falling short of its potential, but for different reasons.

Kimber’s three chapters do convey an intriguing new interpretation of Halifax’s recent history. Resuming the story in 1964, where Raddall left off, he does his best to piece together the city’s downtown development debates, suburban sprawl, cultural renaissance and growing ethnic diversity. A modern Maritime metropolis emerges, in fits and starts, in spite of the region’s continuing decline. Without any identifiable heroic figures or civic leaders, Kimber’s version of the city’s recent history lacks the vibrancy and drama of earlier eras. Since he sees downtown high-rise office towers as threatening forces, innovative development projects like Jim Spatz’s Bishop’s Landing do not warrant a mention. The Pier 21 museum project spearheaded by Ruth Goldbloom may have revolutionized the harbourfront, but it receives only scant mention. When it comes to Halifax business successes, readers will look in vain for any reference to the growth of the Halifax Chamber of Commerce, the revival of the venerable old Halifax Club, the tremendous success of Clearwater Foods or the dramatic arrival of émigré entrepreneurs such as Wadih Fares and Navid Saberi. Cultural festivals of every description are identified as signs of growing metropolitan sophistication. Yet the aborted attempt in the early 1980s to launch a Canadian Football League franchise—the Halifax Schooners—and the more recent abandoned bid for the Commonwealth Games are not referenced, presumably because they run counter to the narrative of an evolving, progressive, humanized, modern city. The latest edition does end on a peculiarly Haligonian note of ambivalence, hinting that Metro Halifax in 2009 was drifting into an uncertain future.

Kimber has earned a deserved reputation as a fine writer. But with this project, he was, it is now clear, very much constrained by the “Radallian formula.” In updating Raddall’s Halifax: Warden of the North, he may well have been attempting the impossible. Instead of an addendum to this popular classic, what we really needed was a brand new, coherent, integrated history of the largest city in Atlantic Canada. Kimber’s three chapters have pointed us in the right direction and amply demonstrate the critical need for a fuller, more conceptually sound popular history.