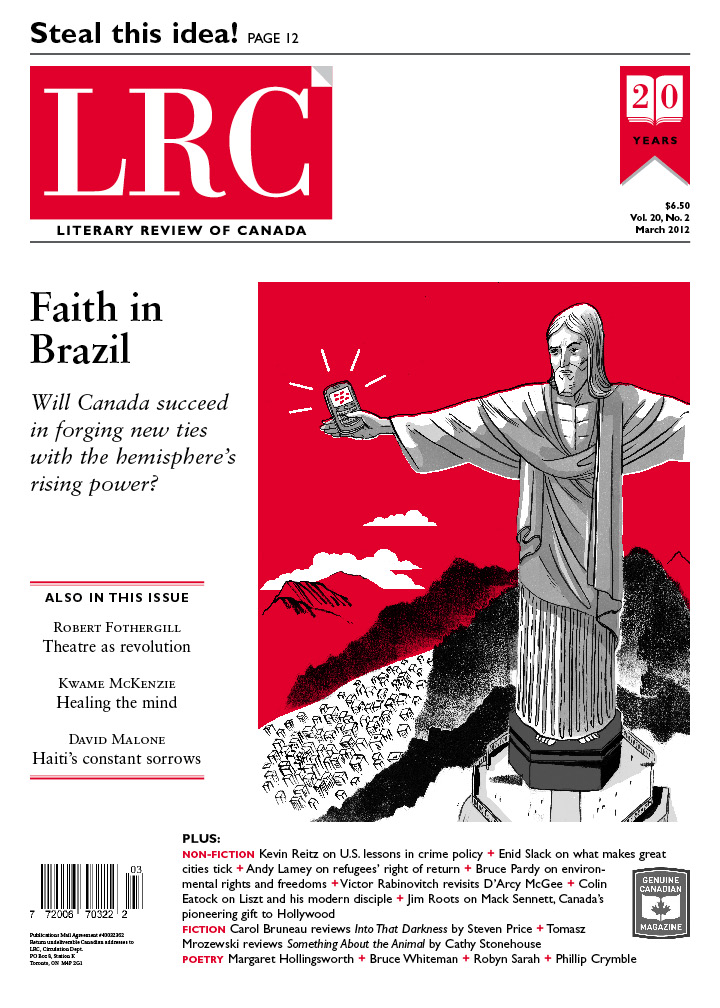 I want to thank Kevin Reitz for his comprehensive review of Fearmonger: Stephen Harper’s Tough-on-Crime Agenda. He powerfully restates the arguments against over-incarceration while highlighting disparities inherent in the system and the negative financial consequences of these policies. I would like to respond to a couple of his concerns with the book.

Reitz says I failed to identify reasons why our elected officials have chosen an exclusively punitive approach over more sensible, effective and affordable policies. However, the book deals at length with arguments that long sentences deter offenders, that tougher prison conditions reduce recidivism, and that “drugs are bad” and deserve more and longer imprisonment. These are some of the justifications offered by the government, and they are found to be wanting.

As to the generally punitive approach of the government, though, Reitz is correct. My inability to present its underlying justification for a “tough-on-crime” agenda was not, however, due to an unwillingness to give the government equal time. It was because the evidence in support of the position, as far as I was able to ascertain, does not exist. Government ministers had two stock answers when questioned about its general approach: “this is what the public wants” and “this is what victims want.” Yet our governments are elected to lead on public policy according to the best evidence available. As well, many highly respected victims’ advocates deplored the government’s policies in the strongest terms.

Reitz concludes that if more attention were paid to the cost of tough-on-crime policies and to the disparities in who gets incarcerated, Canada might reverse direction. It is to be hoped that, as the deficits rise, and as marginalized Canadians are incarcerated in ever-growing numbers, clearer heads will prevail and we will return to policies that actually reduce crime while strengthening our communities.

While Kwame McKenzie appears to have read The Quest for Mental Health: A Tale of Science, Medicine, Scandal, Sorrow and Mass Society closely, he seems to miss one of my book’s pivotal points, which is that before governments spend more money on social programs designed to fight mental illness, they should first tackle the systemic problems facing the field in the new millennium, notably the forces relentlessly driving the rapidly escalating rates of psychiatric diagnosis.

As I write this, researchers, practitioners and consultants are busy drafting the fifth edition of the American Psychiatric Association’s Diagnostic and Statistical Manual of Mental Disorders, the sourcebook for current-day mental health care. The DSM has had an enormous impact on research, treatment and mental healthcare spending, and is used in our hospitals, clinics, schools, courts and offices. Its use is also spreading rapidly to other countries, “homogenizing the way the world goes mad” in the words of one author. As a legion of critics have argued (including a former president of the APA), the staggering multiplication of diagnoses since the first DSM in 1952 has led to numerous worrisome developments, including the widespread over-diagnosis of emotional and cognitive problems in children in the name of prevention and treatment as well as the reliance of low-income U.S. families on psychiatric diagnoses to supplement social assistance. While there may indeed be infighting among interest groups in the mental health field, as McKenzie maintains, virtually none of the major players—psychiatry, government, researchers, medical schools, the drug industry and advocacy groups for patients and their families—appears terribly concerned about this rampant diagnostic inflation.

The examples of misdiagnosis and over-diagnosis could be multiplied, but the point is that our society is becoming saturated with therapism, the notion that life is impossible without the assistance of the psychological sciences. As a result, the so-called “worried well” tend to soak up scarce mental healthcare resources that would be much better diverted to the severely ill, such as schizophrenics and people suffering from major depression. Until we break our addiction to therapism, the mental healthcare system will be a “bottomless pit,” to cite the phrase of a former APA president. In short, there are things we can do to address the issues plaguing modern-day mental health care, but they require deep soul-searching and the kind of candid public debate which I am confident Dr. McKenzie joins me in welcoming.

Re: “The Politics of Return,” by Andy Lamey

We very much appreciated Andy Lamey’s review of our book, No Return, No Refuge: Rites and Rights in Minority Repatriation. The review reflects the same insight, judiciousness and reasonableness as his own writing on refugees in Frontier Justice: The Global Refugee Crisis and What to Do about It. Lamey’s review generally subscribes to our argument that the ritualized incantation of a right of return has evolved into a rite with the consequence of leaving refugees warehoused in camps for years and even decades. However, he does argue that such incantations, even though ineffective in fostering return, are “esoteric” and strategically serve a political purpose in fostering identity and the value of self-determination.

Our perspective is that such rites are not esoteric as Lamey claims. Rather, this is a rite that has become a commonplace, normative reference for many refugees, most prominently Palestinians. We agree that such rites can have indirect functions, including the fostering of a specific type of identity. But at what cost?

A national identity can be, and has been in the case of the Palestinians, built upon solid foundations that do not rely on relegating refugees into warehousing in camps and perpetuating continuous victimization. Furthermore, when the Palestinians’ national identity became globally recognized before 1988, the right of return was subsumed under the goal of vanquishing Israel through military victory; since then, during peace negotiations Palestinian leaders have used the claim of the right of return strategically, not to bolster self-determination, but as a bargaining chip. Whether this is a successful strategy or not is a matter of debate, but so far it has not alleviated the humanitarian fortunes of the refugees, some of whom are fifth generation.

Similarly in the case of Bosnia, the rehabilitation of the refugees’ lives was delayed by the regime of property sales and compensation rather than fostered by the right of return—as Howard Adelman personally experienced from his involvement in the issue. Most importantly, as Lamey himself documents quite independently in his review, the attachment to the rite can also be destructive and can undermine efforts at fostering peace.

We argue that the right of return has a cost, and that minority refugees are made to pay for a claim that has so far never paid off. It did play a role in peace talks, but mostly a negative or spoiler role that for the absolutists was precisely its pragmatic function. Crude slogans or demands that are simple and easy to repeat do permit adoption on a mass scale; the problem is not only that they, in the cases we documented, do not achieve their ostensible goal, but they undermine efforts to foster peace and rehabilitate the refugees. In fostering an unachievable goal, they feed the programs of those who would choose victory rather than compromise and peace and do so on the backs of perpetuating the victimization of the refugees.

Asking Bruce Pardy, a Julian Simon Fellow at the Property and Environment Research Center, to review my book The Environmental Rights Revolution: A Global Study of Constitutions, Human Rights and the Environment is like asking Ezra Levant (tar sands advocate and tobacco industry lobbyist) to review a book by David Suzuki. The reviewer’s ideological blinders predetermine the outcome, resulting in a mishmash of tortured logic, complete aversion to the facts and precious little information about the book.

Unfortunately, Pardy’s review ignores this veritable mountain of empirical evidence, preferring to revisit tired philosophical debates about whether the right to a healthy environment merits recognition.

Pardy’s comparison between a Thai family in a Bangkok slum and a family in Calgary is disingenuous. A fair and informative comparison would contrast Canada’s efforts to clean up the Great Lakes with Argentina’s efforts to clean up the Riachuelo River. Politicians in both countries repeatedly broke promises to tackle industrial pollution in these vital watersheds. Today, Canada invests less than $10 million annually to restore the Great Lakes, a tiny fraction of what is needed. In contrast, an Argentine Supreme Court decision in a lawsuit brought by concerned citizens—relying on their right to a healthy environment—triggered a crackdown on polluters, a multi-billion dollar infrastructure upgrade and a dramatic increase in environmental monitoring. Constitutional recognition of the right to a healthy environment has ushered in a new era of accountability in Argentina.

David Boyd, in his letter to the editor, accuses me of being ideological. He suggests that my review of his book, The Environmental Rights Revolution, failed to recognize that his project was “to transcend 40 years of philosophical debates about the wisdom of entrenching environmental protection in constitutions by actually examining the practical impacts of these provisions.” Boyd does not recognize that all policy arguments, including his own, have philosophical premises. He purports to be philosophically neutral, as though pragmatism is not itself ideological. It is a mistake to believe that our own opinions are based upon premises that are objective, pure, and consistent with the views of right-thinking people. That belief leads us to regard those with whom we disagree as “ideological”, while those who share our predilections are “principled”. In a healthy society, right-thinking people disagree about fundamental ideas. (Yes, Ezra Levant is ideological. So is David Suzuki.) I would call the ideology of Boyd’s book “statist utilitarianism”: if desirable outcomes can be shown to result from state control, then state control is desirable. (Whether those outcomes are actually desirable and whether the causal link can be established are separate questions, and beside the point here.) In my review, I attempted to lay bare my own premises and logic, and also the premises and logic of Boyd’s book, something that he did not deign to do himself. Pity.