A friend once told me something funny about the old Hockey Night in Canada theme song: whenever she hears it, the smell of baked beans wafts up her nose. It is a uniquely Canadian kind of synesthesia, the product of Saturday-evening dinners in the 1980s and ’90s when her father—it was his night to cook—always made the same meal: hot dogs, french fries and beans. Saturday was the lone night of the week when TV was allowed during dinner, and the TV was only ever tuned to hockey. Hence the game’s anthem and the aroma of Heinz beans in tomato sauce.

It is a story Stephen Smith might sympathize with. In Puckstruck: Distracted, Delighted and Distressed by Canada’s Hockey Obsession, he writes about a connection to hockey that is just as personal and physical—and equally involuntary. “Hockey in the blood is a naturally occurring Canadian condition,” he explains. It is a viral sort of passion, easily caught and nearly impossible to dispense with, and the way Smith tells it, he contracted it early in life. The book is Smith’s attempt to wrestle with his obsession—he is deeply ambivalent about the game, which is at once violent and thrilling, unifying and jingoistic—and he explores its allure by way of its literature, his endeavour summed up in the opening sentence: “This is a book about what I found out when I read all the hockey books.”

Smith’s hockey-reading project began when he was just a kid, long before he knew it was a project at all, although he got going in earnest five or six years ago. Reading “all the hockey books”—not all of them, of course, but as many of them as he could manage—had several aims. First off, despite a lifelong love of the game, Smith started to wonder: “Why were hockey players still punching each other in the head, and why hadn’t I stopped watching in protest?” The question he is really looking to answer is this: “Is hockey worth it?” Smith wades through an eclectic mix of books to find out: there is an abundance of memoirs written by former players—Gordie Howe, Bobby Orr, Bobby Hull, Ken Dryden, Phil Esposito, Borje Salming and Vladislav Tretiak—there are training manuals, children’s books, historical tomes and novels. There is even the libretto for a Czech hockey opera, Nagano, written in tribute to that country’s gold-medal triumph at the 1998 Olympics. 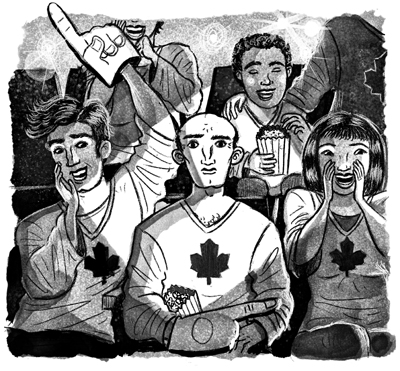 In reading these books, Smith is examining hockey’s origins—not simply where it started and which country can really lay claim to its earliest incarnation (although he wonders about that, too), but the origins of the game as a marker of Canadian identity. He takes us through the history of the sport, back to an age when scrappy guys with names like Boom-Boom, Cyclone and Newsy lined up on the ice. What he finds, in part, is that nostalgia and dissatisfaction are nothing new to hockey. But Smith resists sentimentality; he looks to the past not to mourn some vintage version of the game but to see how it has changed, and how it has stayed the same.

His book is an appreciation for the expansiveness of hockey culture, as thorny as it is beautiful. Part of Puckstruck’s great pleasure comes from Smith’s willingness to digress. He has amassed an encyclopedic knowledge of almost any subject related to hockey you might care to know about, and he is generous with that knowledge. Curious about the game’s pioneers and its hockey dads? He covers that. What about pucks, their history, and whether they are male or female? He covers that as well. He writes about hockey’s lexicon (the only word hockey can truly claim for its own, we learn, is deke); about fighting, teeth (or lack thereof) and stitches; about game-day meals and the history of booing; about referees and the golden age of train travel. He catalogues the various items thrown on the ice over the years (eggs were a fan favourite), and writes about the evolution of the game in Russia and Sweden. If Smith ever gets nostalgic, it is only in mourning the lost art of the hook-check, a move he had hoped to master as a kid.

Smith’s other purpose in going through all these books is to examine the sport’s literature itself—not just the topics covered and lessons learned but the writing, its quality and singularity. It is an anxious project, he admits: “Hockey is famous for not having a literature. Lots of people who can’t name a single hockey novel can chat about this deficiency, often invoking comparisons to the towering achievements of baseball’s writers.” That baseball possesses the fattest literary canon of any sport is something of a cliché by now. No other game has attracted attention from quite so many luminaries—writers such as Bernard Malamud, Philip Roth and Don DeLillo—except maybe boxing, which at least comes a close second. Smith’s quest to find hockey’s “literary soul” is mostly an attempt to validate his obsession with the game. He frets about the lack of a hockey novel by a Nobel Prize winner, although he notes that the game has at least been on the periphery in some of Alice Munro’s short fiction.

If anyone is going to write a Great Hockey Novel, it will probably be about a goalie.

There are hockey classics, certainly. Roch Carrier’s The Hockey Sweater and Dryden’s memoir, The Game, are two of them. And then there are some very good, or at least very worthy, hockey books, which Smith writes about with affection—books such as Paul Quarrington’s King Leary, Mark Jarman’s Salvage King, Ya!: A Herky-Jerky Picaresque and Wayne Johnston’s The Divine Ryans. But where is the Great Hockey Novel? DeLillo, Smith reminds us, once tried to write one—his novel Amazons—even though DeLillo apparently prefers we pretend the book never existed. This seems to irk Smith, which may be why he keeps returning to it. Smith remembers other slights, too, like Richard Ford, who has endeared himself to Canadians even while he snubbed our game in one of his Frank Bascombe novels. “Put-downs by smart people we thought of as friends stab at the chest of those of us who love the game,” Smith notes.

If Smith is overly sensitive about hockey’s flimsy literary canon, he at least recognizes that the sport is difficult to write about. It is frenetic and disjointed, unlike, say, soccer, with all that hypnotic passing, or baseball, a slow and patient sport, and really an individual’s game, with so much constant failure as to seem almost self-consciously narrative-minded. If anyone is going to write a Great Hockey Novel—and it is bound to happen someday, I think—it will probably be about a goalie. They are the eccentric ones, the truly compelling ones, as Smith points out.

Smith himself thinks he ought to have been a goalie. He writes with humour and self-deprecating charisma about his own history with the game, from his childhood in Peterborough, Ontario, through to his continuing passion for the sport as an adult. It is these personal stories that elevate Puckstruck beyond a mere hulking text of anecdotes and trivia. His writing is lively and incisive, and often amusingly beautiful—as when he describes, on a trip to follow the Stanley Cup as it hit Russian soil for the first time, visiting the tomb of Lenin and seeing “his slumbering raw-potato face.”

One of Smith’s most personal hockey obsessions is the 1972 Summit Series, a series he only followed after the fact (his parents were on sabbatical that year, and the family was living in England). Smith is a Dryden devotee, so the fixation makes sense. But looking back at ’72, what he finds is not simply Canadian athletic triumph but rather a worrisome national pride and ugliness. Hockey brings out both the best and worst of us, it seems.

Which takes us back to Smith’s original question: is hockey worth it? The answer is yes, with a caveat. Smith admits that he has thought about giving up the sport. “If the game can’t learn, what can it possibly have to teach?” It is not an unheard-of idea, cutting yourself off from a sport with a troubling history of violence and injuries. The Atlantic’s Ta-Nehisi Coates did just that in 2012. Once an ardent Dallas Cowboys fan, Coates publicly quit following football after the moral quandaries—all that brain trauma, and the worrisome claims that the NFL had covered up what they knew about the dangers of the sport—became too much. But Smith never really seems very serious about giving up the puck. Sure, there are questions about the sport’s safety, and Smith does not ignore them—the New York Times coverage of Derek Boogaard’s death, chronicling the brain damage the New York Rangers enforcer suffered, is required reading for any hockey fan, Smith says. He will not give up the game, but that does not mean he does not hope it will change. And when he is reading all those books, his enthusiasm returns—for all the possibilities of what the game might be.

Smith’s enthusiasm is infectious, and Puckstruck is a charming book. If there is a sense that anything’s missing, it is women’s hockey—our fandom and our participation. Even Smith seems to recognize this. On the one page where he flicks at the women’s game, toward the back of the book, he seems nearly embarrassed: “It’s not right that I’ve left it so late to talk about women’s hockey, and even worse that I’m not really going to say very much.” The women’s game, Smith notes, may have a solution to some of the sport’s most vexing problems. Of course, most of the hockey books have been written by and about men—and the pros, they are men, too. Spend any time in an NHL press box and you will see it is mostly men kicking around. But then I am reminded of my friend—the one whose nose fills with the smell of beans whenever she hears that old hockey song. It was her mother, after all, who insisted on watching the game on Saturday nights, just as she had done with her family growing up. If hockey is our national pastime and a key aspect of our culture, we would do well not to forget half the population. Most women’s games may not get national media attention—they may not even be televised—but if you focus on them, you will see that the players are skilled and the games lively and hard-fought. All that is left is for someone to write about them.

Naoko Asano is a Vancouver-based writer and a copy editor at Sportsnet magazine.