Weinzweig: Essays on His Life and Music

Unheard Of: Memoirs of a Canadian Composer

The struggle that Canadian contemporary classical music composers face to have their music performed and heard has been experienced by many of them as a continuing civil war. The enemy has not been so much the indifferent public; rather, the musical establishment consisting of orchestras, opera companies, concert presenters and broadcasters is perceived to have constructed a defensive mainstream moat surrounding their programming. The history of neglect, or rebuff after a single performance, has been a constant obstacle for Canadian composers for close to a century. One thinks of Harry Somers’s opera Louis Riel, for example: commissioned by the Canadian Opera Company for Canada’s 1967 centennial, and successfully received, it has barely been professionally produced thereafter. The many ensembles dedicated to commissioning and performing new music mostly work on a smaller scale, pay small royalties and are hard-pressed to offer more than a minimal number of performances after the premieres; larger ensembles—orchestras, for example—seem to confine their contemporary commitment to one- or two-a-year events.

John Weinzweig and John Beckwith both waged this battle throughout their careers. Weinzweig, often characterizing himself as a “romantic radical,” was known as an activist his entire professional life, agitating tirelessly and relentlessly on behalf of Canadian composers. John Beckwith, perhaps more quietly, has been as determined and generous a campaigner. Where did they find time to compose, contributing as much as they have as educators, promoters, policy makers and musical ambassadors? Two informative books, Weinzweig: Essays on His Life and Music and Unheard Of: Memoirs of a Canadian Composer, affirm that their subjects are men who transformed Canadian classical new music, and that each in his own way had a substantial impact on their own and subsequent generations of musicians and audiences.

An obvious overlap between these two books is John Beckwith’s dual role as author of one book and as co-editor of the other. In Weinzweig, Beckwith and Brian Cherney commission 15 essays by writers, composers and educators—including themselves—and provide us with an absorbing, penetrating and multifaceted understanding of John Weinzweig and his times. Comprising personal reminiscence, historical, social and artistic context, accessible descriptions of the compositions and appreciations of the legacy, the book also includes a helpful catalogue of works and a discography by Kathleen McMorrow and David Olds, plus a CD produced by that stalwart of Canadian music broadcasting, David Jaeger. 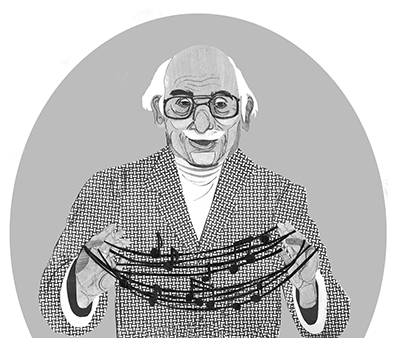 It is perhaps as much in his role as teacher of composition—at the University of Toronto and at the Royal Conservatory—as in his own creative output that Weinzweig’s influence has been felt. John Rea’s thoughtful and complex essay on Weinzweig’s methods, with incidental discussion on the art of teaching seen through prisms of historical and cultural worldviews, makes clear Weinzweig’s conception of himself as midwife and facilitator.

According to Rea, Weinzweig adapted the question-and-answer Socratic method we associate with teaching in general to the teaching of music composition itself, leading to a process
of “self-discovery, self-expression, if not self-healing.” He was convinced, says Rea, that deep within the mind of every potential composer, there was a latent creative truth and that “to be born and to live fully, it must be given a hand, be assisted to enter the outside world.”

But, as Rea goes on to explain, Weinzweig was fighting a major cultural battle within his own creative work, because of the traditional straitjacket strapped around Canadian musical composition during his formative years, and because of his belief that he himself had never received adequate training in Toronto before he spent a year at Eastman School  of Music in Rochester to do his master’s degree.

Weinzweig’s early experience in studying music denied the … concept of … talent [or] “natural capacity for creative thought” … A “rule to art”, [to quote Kant’s famous phrase] had been foisted upon him, ready-to-wear—but the wrong rules for the wrong art … Together with any other inordinate fondness for high classical music, [it] disciplined “living” genius by hindering its flight, clipping its wings; it effectively killed it: Weinzweig was a survivor.

Weinzweig struggled against the Canadian predilection for English pastoral music, reflected in the aesthetic prevailing in Toronto in the 1940s and ’50s, and exemplified in the works of composers such as Healey Willan and Leon Smith. “Unhelpful [and] anti-musical” he called them. A group letter from Barbara Pentland, Harry Somers, Murray Adaskin and Weinzweig himself to Time magazine attacked a concert in January 1948 given by the Toronto Symphony Orchestra conducted by Sir Ernest MacMillan that included music by Willan; the letter set out “to correct any impression that this effort represented contemporary Canadian music … This concert is another example of the timid and short-sighted approach to current trends in music written here or, for that matter, anywhere else.”

In his essay “The Activist,” Cherney suggests that Weinzweig’s “father’s involvement, before emigrating to Canada, with an Eastern European Jewish socialist movement, with its altruistic notions of the individual’s role in society, … played a key role in the formation of his own activism.” However, despite Weinzweig’s socialist commitment to “a program of social transformation that places ‘living’ composers and their ‘creative approach’ in the centre of a revolutionary change of mentality,” Weinzweig subsequently concluded in 1967 that there was no logical connection between training in classical music and the strengthening of personal or civic virtue. “The country with the highest culture in Europe created a holocaust in Europe and threw all that down the drain.”

Weinzweig’s decades-long struggle with the CBC crops up throughout the essays and is colourfully illustrated with Weinzweigian pronouncements—his perception that the CBC was “apathetic” about Canadian music, had an agenda of “tone-washing” the audience with European milquetoast programming, spent its budget on yearlong celebrations of traditional composers while maintaining “hostility” to Canadian music. Just weeks before the CBC mounted a concert celebrating Weinzweig’s 80th birthday in 1993 he was heard on the network coast to coast angrily denouncing CBC’s ongoing failure to support Canadian artists, as Eleanor V. Stubley points out in her imaginative essay, “Ear-Dreaming.” (Although the extensive programming of music of traditional composers like Mozart was often a favourite target, Weinzweig’s compositional style does show Mozart as an influence, particularly, according to Beckwith and others, in the transparency of the Divertimenti, thought of as among his most successful compositions.)

Did Weinzweig sometimes carry his feud with the music establishment—CBC, symphony orchestra administrators and concert presenters—too far? Stubley, describing the mastery of his writing for instruments, evokes a coalescing of “inspiration and realization … so that I could hear Weinzweig ‘hearing [himself] listen’.” But the public, or at any rate the critics, did and do not necessarily see it that way. She cites a review following that 80th birthday concert that characterizes the prevailing sentiment of the program as one of “embittered lyricism.” That critical assessment was quite likely the distilled product of public perceptions of an ornery artist, rather than, as Stubley strains to describe it, quoting harpist Judy Loman, “listening forward through the instrument … to discover both that which still might be and that ‘which has not yet been heard’.” Loman also memorably described that yearning quality in Weinzweig’s music as “dreaming in between the notes.”

Whatever the cause, Weinzweig never did receive the quantity of performances he felt his music warranted. Perceiving himself on the outside of the music world, and supported by a devoted family—he was married to the short-story writer Helen Weinzweig, who noted his personal habits in her mock-serious Field Guide to the Care and Feeding of Composers—he nevertheless helped produce a generation of composers who would make their mark in Canada and on the international scene. During World War Two, he worked successfully writing scores for radio drama and documentary; later his studio became a magnet for pupils, many of them war veterans, who wanted to acquire professional training and were attracted by his open-minded method. To R. Murray Schafer he represented “a Parnassus of one … the things he had to offer were not purchasable anywhere else in Canada.”

Revealed in John Beckwith’s engaging memoir, Unheard Of: Memoirs of a Canadian Composer, is another determined and vigorous temperament. By turns modest and assertive, Beckwith recounts life as a prolific composer, writer, academic, administrator, concert promoter, publisher, journalist and family man. The sense of Canada evolving in the mid 20th century, its musical and social life seeking an identity distinct from Europe, is described through anecdote and detail—often from memory since he admits to not always having kept daily notes. Early in the memoir Beckwith confesses to “longing for fame” from his youngest days, and he sustains this candour throughout.

Beckwith has worked or been associated with musical and artistic figures everywhere. His student days in Paris under Nadia Boulanger, then in Toronto with Alberto Guerrero, and John Weinzweig (Glenn Gould and Harry Somers were at different times fellow students) are entertainingly described. Throughout his career well-known names from the Canadian artistic milieu appear as colleagues in a diversity of artistic, political and academic projects: the most significant relationship for him perhaps has been with dramatist James Reaney, with whom he has written several long and shorter works. These and the rest of his oeuvre are discussed in several chapters.

Beckwith is often drawn into interesting, sometimes pioneering enterprises through his easy conviviality, openness and constant appetite for the new. One of these has been his continuing fascination with the early music of Canada, and his sterling contribution to the 25-volume Canadian Musical Heritage edition. He points to his own research and writing interests in the history of tunebooks and hymnals, and this comes as a revelation. Why, he asks himself, is he interested in this? His observation that people retain familiar hymn-tune melodies alongside pop songs leads him to the idea of psalmody and hymn singing as significant in the lives of early North Americans, and the insight that our Canadian ancestors learned the fundamentals of music while becoming familiar with the repertoire of tunes. Popular rhythms in particular, with their five-, six- or seven-bar units, behaved differently from the classical music vocabulary of Europe; hymns can be found in music from Bach, Mozart and Brahms to Berg and Stravinsky, and it is no surprise that hymn formations show up in Beckwith’s music too.

A short account of the classical new music composing fraternity unsuccessfully opposing the takeover of the performing rights societies by commercial and pop music interests resonates with the apprehensiveness many figures began to feel in the 1990s. Several dispiriting episodes in Beckwith’s family life are described with that by now expected candour. The lengthy breakup of his marriage in the 1970s, the recent suicide of a son, failing health when overwhelmed by work—these are balanced by his growing relationship with Kathleen McMorrow. Although he more than once refers to himself as capable of impatience, he acknowledges that “lucky” is a hallmark of his life and disposition, and the reader is left with the firm impression of a tenacious and optimistic personality still active—“doing” in his own word—in Canadian cultural life well into his eighties.

From Wilfrid Laurier University Press, both books incorporate photographs, music examples, detailed notes and indexes. In addition to their narrative strengths, the books also include comprehensive and credible technical discussion and analysis of the subjects’ music by practising composers, musicians and authors. Should they delve into these chapters, general readers will learn a great deal about mid 20th-century compositional and performance practice too.

John Brotman, trained as a musician, recently retired after more than a decade as director of the Ontario Arts Council.