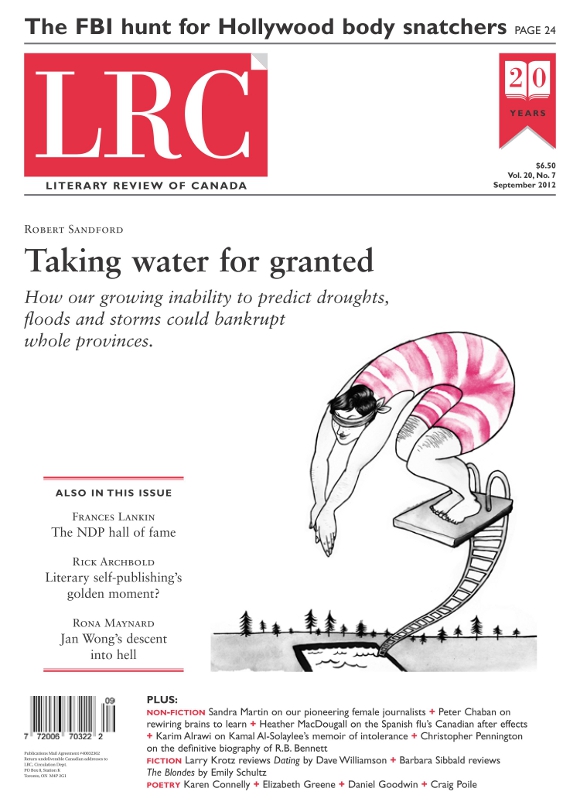 Re: “An Unexpected Water Crisis,” by Robert Sandford

Robert Sandford raises issues backed by scientific results from two recent national research networks and other studies. The networks, studying drought and cold regions hydrology, involved over 100 scientists and students from across Canada and examined how climate and hydrology could be better understood and predicted in the recent Prairie drought of 1999–2004 and the rapidly warming Canadian Rockies and North. Both networks ceased activities in 2011 due to lack of available funding mechanisms. However, the lack of funding did not stop water problems due to climate change from progressing and becoming even more complex. The interior of Western Canada is now experiencing rapid environmental change that threatens our familiar landscapes, ecosystems, way of life, infrastructure and ability to produce food and energy. Climate warming is converting spring and fall snowfall to rainfall, which alters when and how much snowmelt water is released to streams and soil; this results in longer snow-free periods that can cause declining stream-flow generation from the Canadian Rockies, the retreat of mountain glaciers, permafrost thaw, earlier river- and lake-ice breakup, and drier conditions overall. In the farm belt, along with the warming, summer rainstorms have increased in duration and area so that they can now cause widespread flooding. Where they are less intense and do not include hail and intense wind, the rains can also result in spectacular crops, but the increased variability of rain and snowfall adds much risk to Prairie agriculture. In the last 15 years we have seen both the driest and wettest conditions ever measured and some years have seen drought and flood assistance to farmers at the same time!

As Sandford notes, natural ecosystems are responding. These changes include upward and northward advancing alpine and Arctic tree lines, extreme variability in the amount of water stored in Prairie wetlands, lakes, soils and groundwater, the “browning” of the boreal forest and prairie aspen woodlands, forest collapse and wetland formation where permafrost retreats from the sub-Arctic, and advancing tall shrubs into open tundra. Canada’s water resource management capabilities are under increasing stress as climate warming makes our water supply more variable and unpredictable. We desperately need to better understand and predict water supply for transportation, disaster management, energy, food and ecosystem sustainability in light of this whole-scale environmental change. To do this we need an intense science and engineering effort to improve our water management technology along with enlightened water management policies.

Robert Sandford writes that water experts “are particularly concerned about industrial-scale agriculture and the degradation of water that it produces” in the Lake Winnipeg Basin.

So powerful are the animal agriculture lobbies that politicians do not have the courage to regulate them let alone stop subsidizing their pollution with cash. According to a report released by the Food and Agriculture Organization in 2006, animal agriculture causes more pollution than all forms of transportation put together.

All citizens can do is vote with their pocket books: boycott animal products and eat vegetables. FAO’s researchers have declared that we have no choice. Kant’s categorical imperative is helpful here. So act that the maxim for your action could be enacted as a law for all mankind. Government is not going to do anything about it.

Re: “The Fight of Her Life,” by Rona Maynard

A couple of quick disclaimers to begin with. I have never met Jan Wong and am not familiar with details of her depression. I am also not familiar with the nature of her grievance with The Globe and Mail. As such I will comment on neither of these topics. Psychiatrists who opine from afar without directly acquiring information of an individual’s mental state, personality and behaviour run the risk of overreaching and doing their subject (and themselves) a disservice.

What I am familiar with, however, is the subject of depression as it pertains to journalists, for I have been studying the emotional well-being of this profession for over a decade. I have seen many fine journalists succumb to this disease, taken down hard by a constellation of debilitating symptoms that transcend sadness. What journalists don’t realize (and this not unique to them) is that low mood is often accompanied by changes in appetite and sleep, feelings of guilt, poor self-esteem and doubt, an inability to enjoy even the simplest of pleasures, a loss of interest in sex and a sense that life may not be worth living. And these difficulties are not transient. They run on and on, the weeks turning to months and in some cases years, should the diagnosis be missed or the journalist shy away from help. Symptoms, of course, do not exist in a vacuum. The depressed individual struggles to work, relationships suffer and creativity can wither. No wonder that depression, of all the mental illnesses, has the highest rate of suicide.

Journalists are driven. Their work demands it. Getting the scoop, beating the competition, filing on time to tight deadlines all induce stress. And while journalists know this and voluntarily chose this way of life because it fits with their temperament, it is all too easy to cross a threshold into a lifestyle that is so unbalanced that emotional problems set in. And when depression or anxiety arise, the difficulties multiply, foremost among which is the need to keep the persona in place. Distress is misconstrued as weakness, a personal failing. Ignorant or unsympathetic colleagues and bosses foster this distortion.

Scenarios like the one above have been all too common in the past, but news organizations are slowly, and in some cases, grudgingly changing. There is a growing recognition that good journalism depends on healthy journalists and depression can be successfully treated. All of which makes the missed diagnosis, a spurned offer of help and a management’s indifference so unfortunate and unacceptable.

Re: “All Is Not Vanity,” by Rick Archbold

Thank you and Rick Archbold for “All Is Not Vanity” in your September issue.

It has helped change my formerly down-the-nose attitude toward self-publishing.

Having successfully endured the usual lengthy process of traditional commercial publishing, I welcome Rick’s insight. (At age 90 I simply don’t have time to waste.)