In 1953, Barry Strayer, a University of Saskatchewan law student, was in London on his way to a student seminar in India. He witnessed Queen Elizabeth’s coronation and marvelled at its power and pageantry, reflecting not just royalty but a vast and diverse empire—an empire crumbling yet still grand. Nearly 30 years later, on a wet and dismal day, he joined thousands of Canadians on Parliament Hill to watch that same queen proclaim in force the constitution that would place Canada, at last, beyond the reach of British politics. This moment, far less grand, was considerably more momentous for Canadians, and for very few was it more gratifying than for Barry Strayer. For nearly 15 years he had toiled mightily in the labyrinthine structures of federal constitutional planning and in the chambers of federal-provincial negotiations to get to just this moment. In Ottawa that day Canada’s sovereignty was formalized; it gained untrammelled authority over its own constitution and it declared its subscription to human rights.

In light of the national importance of the history of creating Canada’s modern-day political framework, the literature dealing with constitutional development is not large (although, strangely, the failure of the 1987 Meech Lake Accord has led to a vast body of history and analysis). The making of the 1982 constitutional reforms has received limited treatment. Why is this so? Perhaps it is because constitutional reform in Canada has not, in spite of Strayer’s provocative title, been revolutionary. All of it—meetings, proposals, disputes, legal drafts and resolution—has unfolded according to staid legal lineage. But there is, nevertheless, a revealing history to be told. The substance of constitutional reform has never been easy to arrive at, and discovering the appropriate process for measuring national agreement has mostly been unsettled. The contribution to history provided in the accounts of participants in those processes should, in the face of only meagre scholarship, be welcomed, notwithstanding their inevitable biases and limited perspectives. (In full disclosure, I am among this class of participant-authors and not at all exempt from the charge that the facts and analyses of that work were filtered through the perspective of personal experiences of its authors.) 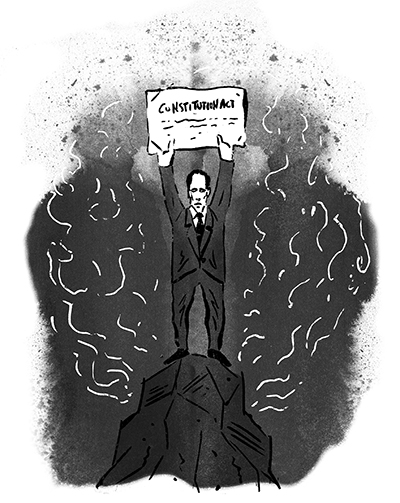 For those readers unacquainted with all the twists and turns of this history, Strayer’s book gives interesting texture on the by-play between provinces and the federal government over method and substance. For Strayer, this began before he reached Ottawa. He was part of the Saskatchewan delegation that in 1960 and 1961 participated in four conferences on constitutional amendment. He recounts his reaction to the amending formula advanced by federal justice minister Davie Fulton. Fulton had proposed that any new constitutional amendment should initially require unanimous provincial approval. Strayer, like some of his Saskatchewan colleagues, was stunned. “To us it seemed incredible that the federal government should be so reckless of its own future,” he says, “that it was prepared to render any prospect of future amendments a hostage to the special interests of any province.” This was in part a reflection of his social democratic political leanings, whose constitutional elements Strayer was imbibing from two mentors—Tommy Douglas, premier of the province, and legal scholar F.R. Scott, who was serving as a constitutional advisor to the Saskatchewan government. Reflecting the then dominant viewpoint of Canadian socialists, both these men stood for the need for a strong central government whose powers should be protected in any new constitutional agreement.

After graduate work at Harvard Law School and teaching law in Saskatchewan, Strayer was offered the opportunity to participate in the renewed federal constitutional initiative. His NDP sympathies were well known, but this seemed not to bother the man soon to be his boss, the newly appointed justice minister Pierre Trudeau. Both men shared much in common, not least a debt to F.R. Scott’s constitutional ideas. From the beginning, according to Strayer, the two hit it off, perhaps due to Strayer’s gleeful chiding of Trudeau, the first time they met, over his opulent ministerial office. No doubt this personal rapport with Trudeau and their common training helped propel Strayer to a key advisory role in the successive rounds of constitutional debate and discussion.

Strayer’s book is full of anecdotes—sometimes with excessive detail of meetings and persons that he worked with. While at times these accounts enliven the narrative, they do not convey a full sense of the actual dynamism of the constitutional negotiation process. Strayer is more concerned to offer a constant and stout defence of the federal campaign for constitutional reform, particularly in the ways this campaign reflected the political views of Trudeau himself. This leads the author to an extended discussion of the evolution of Trudeau’s political and constitutional ideas from early manhood. It also leads him to spend much time and energy rationalizing Trudeau’s every tactical constitutional move.

Although perhaps understandable in a memoir, this emphasis on one viewpoint, complete with an almost constantly approving treatment of each federal purpose and strategy, undermines this book’s historical or critical value and prevents it from conveying an overarching view of how the 1982 amendments came about. Not only is the powerful influence of the provinces’ collective role in the making of these constitutional reforms underplayed and barely explained, but also missing is the importance of partnerships and networks, to say nothing of friendships and trust among the large cast of protagonists, in coming to this moment of Canadian political accommodation. As always in history, the moral value of events is not tied up exclusively in the substantive result but also resides in the process. The way a country conducts its political life constitutes its reality and values as much as its formal declarations of intent do. This book’s most serious shortcoming is its hiding of the powerful influence of relationships, bold choices and genuine statecraft.

There is no gainsaying Trudeau’s determination to bring about the constitution’s modernization. After the failures of the early 1960s, the constitutional file lay more or less dormant until its resuscitation under Lester Pearson and Pierre Trudeau in the late years of that decade. Trudeau’s primary agenda of constitutional patriation and the introduction of constitutional rights not only shaped the emerging framework for constitutional agreement, but it also gradually captured national sentiment. With Trudeau’s unexpected return to office in 1980, along with Quebec’s election of a separatist government, his aggressive stance began to compel most provinces into a genuine search for constitutional renewal. Still, provincial priorities continued to fuel intransigence with respect to the objects and terms of reform, while Trudeau’s sense of his own superior constitutional vision and his conviction that he was the custodian of the national will for constitutional change were also high barriers to arriving at constitutional accord. Ultimately it took his federal colleagues and other allies to draw him away from his frustration over the views of his opponents and, then, from his reluctance to agree to concessions. For Strayer, however, Trudeau’s intransigence is never painted in anything other than a heroic light.

It is not a significant element of Strayer’s account that time and again federal strategies produced intense provincial opposition and that, in due course, those strategies were abandoned in favour of provincial preferences. For instance, just before the 1981 first ministers’ meeting meant to finalize agreement based on federal–provincial negotiations, Michael Kirby, the chief federal manager of constitutional reform, prepared a memo, which Strayer praises, that claimed the federal government could, without provincial participation, bring about amendments that would entrench rights, patriate the constitution and create a domestic constitutional amending formula. Clearly, this did not match constitutional practice; nor did it accord with the moral foundations of Confederation. The first ministers’ meeting that followed, already fraught with tension, proceeded in a complete absence of trust. After the Kirby memo, the conditions for finding common ground simply disappeared until, a little more than a year later, the government realized that constitutional reform based on unilateral federal action would never succeed and agreed to new negotiations.

In 1981, when the Supreme Court was asked for its opinion on the rules for making constitutional amendments, the federal government again insisted that no provincial participation was required. A majority of the justices stated that, as a matter of legal rule, the changes required nothing more than enactment by the British parliament. However, a majority of the court also said that constitutional convention and practice required the amendments to have support of a substantial majority of provinces. Strayer condemns the court for venturing into this aspect of the constitution, and criticizes its opinion for “both its illogicalities and its harmful consequences.” He claims that there was no such convention (although, in fact, it was an accurate description of an established constitutional practice) and that the court should not have ventured into this aspect of the constitutional order. But the court has every right to consider both legal and conventional forms of the constitution and if it had failed to do so would have provided a highly distorted description of our constitutional regime. This decision, issued just when Ottawa was pressing the British parliament to proceed on its unilateral request to implement constitutional changes, was fatal to that plan and, of course, led to a far different outcome than the one that the federal government had designed for Canada.1

Strayer writes in defence of the proposed federal amending formula, and, indeed, it had a reasonable provenance. But it did not survive an hour once federal justice minister Jean Chrétien and Saskatchewan attorney general Roy Romanow agreed, in the famous “kitchen meeting” of November 4, 1981, to propose to first ministers a compromise package that included the amending formula developed by the provinces. Strayer ignores the fact that just a few months earlier Trudeau had mockingly denigrated this formula, yet it established the rules for amendment that Canada now lives under.

Creating a charter of rights was at the heart of the federal strategy. In the second half of the 20th century, this was hardly a surprising or radical constitutional idea, even if, lamentably, it was resisted by many premiers. However, this key aspect of the federal agenda was conceptually deeply undermined through Trudeau’s agreement, at the eleventh hour, to include the notwithstanding clause that allowed provincial and federal legislative overrides of basic human rights. This shift, which without doubt deeply distressed Trudeau, was made, it is widely thought, at the insistence of the Ontario premier, Trudeau’s strongest provincial ally. These eleventh-hour adjustments are not mentioned in Strayer’s book, yet they defined the constitutional reforms that were achieved. By now, the force of the notwithstanding clause has withered away, but for a time a crucial term of Canada’s rights regime was shaped by the earnestly held views of a group of provincial premiers.

All of these—and many other—instances of placing the intergovernmental relations that defined constitutional reform in the shadow of federal strategies and policies weaken, although do not destroy, this constitutional history. Strayer’s book does tell well the important story of a group of talented and dedicated federal politicians and officials striving to bring about constitutional renewal. But Canada is a diverse and complicated country. Its political life and, especially, its constitutional development rests on a complex of accommodation. Explaining why, and how, things turned out the way they did when we brought our constitution into its own time and back to its own country deserves a more balanced treatment.

John D. Whyte is a professor of law emeritus at Queen’s University and is a policy fellow at the Johnson-Shoyama Graduate School at the University of Regina. He was Saskatchewan’s director of constitutional law from 1979 to 1982.