Ara Norenzayan, a professor in the psychology department of the University of British Columbia, clearly had fun writing Big Gods: How Religion Transformed Cooperation and Conflict. His joy in ideas, his delight in being a contrarian and his unspoken but obvious pleasure in kicking senior members of the chattering class comes through with entertaining clarity. Without going all wittering on us, he makes it clear that he has more than a few reservations about old-school evolutionists (such as Richard Dawkins) who are weak on cultural evolution, and he is not keen on those members of the clerisy (an example would be Charles Taylor) who have explained why the world allegedly has turned all secular in the face of the evidence that there, in fact, are more religious people on the globe than ever there have been.

Norenzayan writes very well: relaxed and conversationally. So one is not being harsh in suggesting that the reader should go through his endnotes before reading the text. They are not a hard slog, but they contain some special definitions and qualifications that are best kept in mind when dealing with the main material. In particular, in the notes Norenzayan explains that he is “operationalizing” religion, rather than giving it a clear semantic boundary. Instead of imposing conceptual definitions, he sees religion as “the package of traits that gets labeled religion.” At heart, this says that religion is what people who practise, observe or study religion recognize as being religious—an operational simplicity that allows for the package to evolve, “taking different shapes in different groups and at different historical times.” Fair enough warning: the reader thus knows that Norenzayan will change his usage of the term “religion” as he goes along. He is also plastic with his big explanatory concepts, most notably “big gods,” which have different meanings depending upon which chapter of the book one is reading.

The book is a heroic attempt to explain a pair of facts concerning the Holocene period of human history. (That term, meaning relatively recent time in human history, from circa 12,000 years ago to the present, is the only unnecessarily academic term in the entire volume.) These are that prior to twelve millennia ago, people were hunter-gatherers and lived in small groups; and today we live in vast “scaled up” aggregates of humanity, with dense populations and in groups that are for the most part cooperative. The scope of this exposition (but happily not its style) reminds one of the great late-Victorian efforts to transpose evolutionary theory into cultural theory—and that is what Norenzayan is consciously doing here. 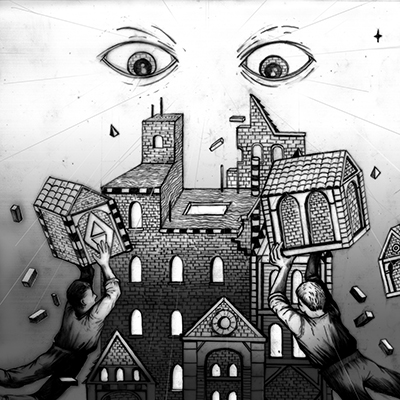 Shorn of its admirable subtlety, his basic explanation of why big societies developed is that big gods made them possible—although big gods were not the sole cause of the social expansion in scaled-up groups. What big gods actually are is left a bit fuzzy, but they are mostly defined herein by negatives. They are not the tiny gods presumably worshipped by tiny groups. (The hint of a tautology begins to arise here.) The big gods are not, unlike the small ones, appeased by local sacrifices and familial rituals. Little gods have no real moral scope and only took care of the neighbourhood. Big gods, Norenzayan suggests, are the ones that have a wide frame of reference, both in terms of geography (they do not just control a wee bit of the Earth) and in social breadth, and, crucially, they possess a massive range in their ability to see what people do and to regulate them. His concept is that big gods have been “prosocial” and have led to large-scale cooperation. They have increased group solidarity in considerable part by becoming a policing force. This was made possible by their becoming omniscient, or very close to that. These big gods have not been highly abstract, but have been like human beings, only smarter, tougher and more knowing. Because of their enforcement powers, the big gods have made possible a shared set of behaviours that run well beyond the borders of just one family or tribe and thus have made possible large cooperative groups. Once that occurred, leaps in trade, trust and, in the author’s view, fertility occurred.

Put aside for the moment the obvious objection that there is no direct evidence of this train of events; and forget as well that perhaps as the various groups discovered agriculture (the leverage point for settling down), they invented gods that replicated and served their new culture, so that enlarging groups created growing gods until, ultimately, big societies produced big gods. There is simply no direct probative material concerning the base period. And pointing to today’s surviving hunter-gatherers and looking at their gods is the kind of human museumship that has resulted in some of the most racist and condescending generalizations about the alleged ancestors of present-day indigenous peoples. No, Norenzayan gets his day in court unimpeded by such objections because he has a very nimble and creative way of getting around the evidentiary vacuum.

His method is to appeal to his own specialty, cognitive psychology, and to a range of fascinating small experimental studies that can be knit together into a web of explanation that may plausibly be projected backward into the distant past. That his own experimental studies are the most energetically showcased is hardly a flaw: in a book about the invention of gods, a little narcissism is appropriate. Almost all the experiments he cites point to confirmation of his basic hypothesis about the “cognitive origins of beliefs in gods.” That is, people reason about god as if the deity had humanlike qualities and this “personlike being with a mind…piggybacks on mind perception.” Not much new here: some of the ancient Greeks had the same idea.

What is most intriguing is Norenzayan’s summary of his book into a list of eight “principles.” The hub of these are three principles that (in my terminology, not his) are all part of an overarching triad of Stasi directives. The first of the three pivotal directives is that “watched people are nice people.” The author does not mean nice in a sweety-sweet way, but that humans are pressed to act in what he calls “prosocial” ways. Predictable (and thus, in one sense, trustworthy) behaviour is greatly increased if, to take one of his experimental examples, a schematic representation of a pair of eyes is projected into the environment. According to Norenzayan, the watchers (whoever or whatever they may be) become ever stronger through human cultural evolution’s stumbling upon “supernatural monitoring.” Now, this may be true, but to see it as nice, even in the most neutral sense, rather misses the awkward point that many gods and the most successful big gods (try Yahweh) have spent most of their careers as war gods. Much of the social cooperation they legitimate is hostile to non-members. It is instructive to remember that under the watchful eye of Yahweh’s “supernatural monitoring,” the three heirs of the Abrahamic tradition—Judaism, Islam and Christianity—are today engaged in a continuous low-level war with each other.

Norenzayan’s second Stasi directive is that “hell is stronger than heaven.” Doubtless he is right, at least in the world-of-the-continually-watched, which he sees as progressive human culture. A kind and forgiving god does not control human behaviour as efficiently as does a really nasty piece of work who punishes bad behaviour severely. The author cites a wide variety of experiments in his field with results that lean clearly in that direction. For example, he instances a deft little study that he and Azim Shariff conducted in which they found that University of British Columbia students who believe in a “mean” god—one who can give you hell for being offside—tend to cheat less on computer-monitored experimental tests than do those who believe in a “nice” god.

And, third, Norenzayan asserts the necessity of “Big Gods for Big Groups,” a very effective phrase with its Aldous Huxley resonance. Of course this follows from the author’s adapting an evolutionary model for his exposition (religion has to be in some ways culturally adaptive, and progressively so, or the evolutionary model is useless). We know that societies have become bigger over the last 12,000 years, so of course the gods have become bigger.

The three phrases in the Stasi litany deserve repetitive chanting: “Big gods for big groups; hell is stronger than heaven; watched people are nice people.” One can almost hear them ringing out at a rally in Pyongyang.

Emphatically, Norenzayan is good natured and does not do a Christopher Hitchens rant about the implications of his findings; he is genuinely enthusiastic about the fascinating pieces of cognitive psychology that he can fit into evolutionary theory. One wishes he had done two things, however: the first he could have accomplished easily within his present knowledge base—namely, guide us efficiently through the minefield of debate on whether or not human cultural development over time is rightly discussed within the rubric of evolutionary science or is better approached as a field of its own. His testimony that he has faith in E.O. Wilson’s view on the existence of “consilience … the ultimate unity of all knowledge” is heartening. Thomas Aquinas would have agreed with them. But joining large systems of thought together without making sure that they are compatible runs the danger of producing not synthesis but bricolage.

The other matter that Norenzayan might approach at some future point is to access the massive database—call them libraries—of historical and textual studies that deal with religion and associated cultural developments over the last 4,000 years (and sketchily for another 2,000 previous to that). The material is both rich and relevant and provides a wide range of opportunities for testing Norenzayan’s hypotheses. Mastering a significant swatch of this material is not as much fun as filling in the void between the 21st century and the year 10,000 BCE with speculation; however, remaining virtually innocent of the history of religion is not an intellectual virtue.

Still, this book is great value for the money: it provides energy, intriguing ideas and a joyous display of a fine mind, one that swoops and soars and frequently stops to preen, like some brightly coloured bird in an Edenic rainforest.

Religion, as a widespread feature of human lives, cries out for a scientific explanation. Yet David S. Wilson was not exaggerating when he wrote that more scientific papers have been written about the evolution of one species of tropical fish—the guppy—than about the evolution of religion. The evolutionary study of religion is not for the faint hearted, but happily for the curious, the taboos erected against this project are crumbling at a rapid pace. It is in this context that I wrote Big Gods: How Religion Transformed Cooperation and Conflict—not as the final word decoding religion’s mysteries, but as my attempt at connecting the known dots, and an invitation for ongoing...