In Praise of Mixed Religion: The Syncretism Solution in a Multifaith World

Isaiah Berlin’s 1953 essay, “The Hedgehog and the Fox,” famously divides thinkers into two groups, those who chase after the knowledge of many things and those who relate everything to a central vision. One problem with the latter group is a tendency to explain the whole world and solve its problems through a structure or system of their own -devising.

William H. Harrison seems to have fallen victim to this tendency in his book, In Praise of Mixed Religion: The Syncretism Solution in a Multifaith World. The Reverend Doctor Harrison, principal of the Kootenay School of Ministry in the Anglican Diocese of Kootenay in British Columbia, sees religious syncretism, or the amalgamation of religious ideas, everywhere and in everyone. His book is built on three assertions: everyone is religious, all religion is syncretistic and, on the whole, this is good. He urges us all to embrace these ideas and, when we have, we can “publically and intentionally work together on the needs of our world. The time has come for us to take up the challenge!”

Key to Harrison’s conclusions are his broad definitions of important terms. For instance, he defines religion in a way that allows him to declare that we are all religious, even those who claim no religion whatsoever. Indeed, even those who are virulently anti-religious are religious. “Our religions consist of our larger viewpoints, the explanations that define our lives …  We seek to understand our world and our places in it through religious inquiry. Our religions consist of the fundamental reasons that we have for being. As a result they constitute the basis for whatever we have in the way of plans for life. Religion, therefore, is the origin and locus of ultimate value, of ultimate concern.” Thus, not only are Judaism, Islam, Christianity, Buddhism and Hinduism religions, but so are capitalism, consumerism, Marxism, evolution and scientific materialism—just to list a few of the newly “christened” faiths. 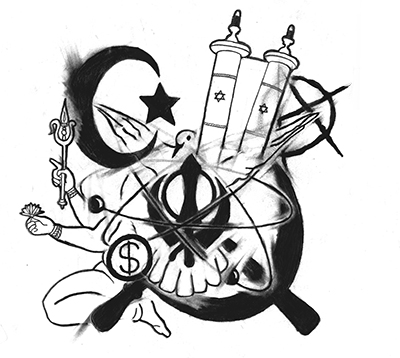 While Harrison acknowledges that the traditional definition of religion comes from the Latin, religio, which means that which is offered or obligated to god or the gods, he has opted for a rarer and much more inclusive definition of the word. This broad definition is key to his system, for if religion is not everywhere, religious syncretism cannot be the big overarching solution that he wishes it to be, and his book cannot hope to be “a call to change the world.”

As for syncretism itself, Harrison claims that religions cannot survive without it, for no one religious system can answer every question that may become important to humanity. Those answers must be found somewhere else and incorporated. The world’s wisdom must be shared. This is his solution.

Obviously, the very nature of religious syncretism means that change is involved. A religion that has incorporated concepts from another religion is no longer exactly the same as it was before. For this reason some religions, particularly those associated with a revelation from god or gods, deny that syncretism occurs. To do so would mean that the religious instruction received by revelation was insufficient and has consequently been forced to subtly or even drastically change through the incorporation of bits and pieces from other religions—something that might be disturbing to devout members of a particular religion.

Harrison has very little sympathy for those who deny that syncretism occurs. Just as he proclaims that everyone is religious, we are told that every religion is syncretistic, no questions asked. To deny that religious syncretism occurs in all religions is to be either irrational or “ahistorical.” “Even if we dismiss syncretism in principle,” he writes, “we do not have the option of rejecting it in practice.” Those who for religious reasons disagree with Harrison have no say in the matter, which seems to go against the air of religious tolerance he is trying to -encourage.

Religions have “soft boundaries” in Harrison’s view, so it is difficult to tell where one religion begins and another one ends. For example, the main religions practiced in Japan today are products of a syncretism between Chinese Buddhism and a now defunct form of Shintoism, resulting in Japanese Buddhism and a new form of Shintoism. Moreover, Harrison holds that because each person within a single religion holds and reacts to each tenet of that faith personally and individually, no two members of the same religion actually practise the same religion. So not only are there no definite boundaries between religions, there are no unified religions. According to Harrison, there is no Christianity; there are only Christianities. There is no Islam, only Islams. Accepting this view makes religious syncretism natural and desirable—as logical, efficient and ineluctable as natural selection. (In this way the syncretism solution is more than a little redolent of the all-encompassing, deterministic dialectics of Hegel and Marx.)

Luckily for everyone, Harrison informs us that religious syncretism is a good thing … except when it is not so good. This is where Harrison’s system, which was debatable but at least consistent and tightly argued early on, starts to show its cracks.

Syncretism is a good thing when it results in the improvement of a religion. But who is to judge whether or not a particular syncretism results in an improvement? You are. I am. Each one of us. We are all said to be religious, and each of us must now make our religions better. Harrison provides us with these guidelines: Does the syncretism allow for more consistency “with the data that we have”? Is it genuinely helpful? Does it preserve the insights of the religion(s) before the syncretism? This is more than a bit underwhelming as an overarching solution to “the problem of a multifaith world.” Solutions should minimize complications, not multiply them.

Even more disappointing are Harrison’s examples of positive religious syncretisms, particularly the one between Celtic Paganism and early Christianity. Harrison claims that the encounter between early Christians and the Gaels of Scotland and Ireland was mutually beneficial for both religions. In this beneficial religious syncretism the Celtic religion supposedly reminded Christianity “of the importance of the natural world,” while Christianity gave the Celts the gift of “a vision of the world that encompassed their immediate surroundings and gave cosmic importance to their lives and their history.”

Leaving Harrison’s patronizing tone aside, it is clear that syncretism occurred. The Catholicism of Ireland and Scotland today are prime examples of Christianity’s adopting some of the religious customs of a pre-Christian culture and putting them to use in Christian liturgies and rituals, but was it really mutually beneficial to both religions? One doubts that the devout followers of the Celtic religions in Scotland and Ireland really saw it that way. Instead of a gift that allowed Celts to understand their “cosmic importance,” it seems much more like a destruction. No matter that there are still pre-Christian customs in the Catholicism of Ireland and Scotland today; the religion of the Gaels is gone, and it is gone because it was vanquished by Christianity. No wonder some religious groups do not want to embrace syncretism. It might put them into extinction. To his credit, Harrison admits that parts of this particular syncretism were not good and that even when syncretism is good, “it is not necessarily an unalloyed good.”

When it is totally bad, Harrison claims it has three characteristics. The first is an increased tendency toward violence. A second feature is too much emphasis on the individual and the consequent disregard of the communal. The idea that material blessings come from worshipping the Christian god or following Buddhist principles, for example, are “prosperity theologies,” which come from mixing with the religions of capitalism and consumerism, resulting in destructive forms of selfishness. Conversely, the third quality of a bad syncretism is too much concern for the community at the expense of the individual. The lack of individual freedom in jihadism or the strict Saudi Arabian theocracy, for example, has resulted at least partly from a negative reaction to the capitalist and individualistic West, which Harrison claims is a type of religious syncretism.

Up to the point where he begins enumerating his idea of good and bad syncretisms, Harrison’s system is still in place with his argument progressing logically. These two chapters should have provided the evidence for the grand solution that is religious syncretism. They do not.

Even more problematic are the later chapters. One of these is supposed to demonstrate an example of when religious syncretism should have happened but did not. This chapter makes a brief argument for the recognition of Soviet communism as a religion and then moves on to a recounting of its decline and fall. Without demonstrating how this is the case, Harrison concludes that “logically, the fate of Soviet Marxism-Leninism is exactly what might be predicted on the basis of our larger discussion.” Moscow simply did not get on the syncretism bandwagon.

The Soviet Union suffered from many problems before its collapse. Maybe syncretism really was the answer, but how exactly could it have helped? Syncretism with what other belief system? Wouldn’t syncretism have created something different than Soviet Marxism-Leninism anyway, delivering its own type of coup de grâce? Harrison is mute on these questions.

His chapter on religious education will likely rub secular readers the wrong way. He seems entirely out of step with most of Canada’s views on public education, not only lamenting the fact that his local university has only five religious scholars while it boasts 81 mathematicians but also claiming that the “religiously uneducated are culturally deficient. They cannot be competent citizens in their own towns and are utterly at a loss as citizens of the world.” He also writes that the Quebec charter of values was an attempt to fulfil the goals of radical and extremist adherents of an “anti-religious -religion.”

As he does throughout the book, Harrison makes some bold and even grandiose claims in his final chapter—which he calls “An Intellectual Transformation”—but his claims are fatally flawed because they are built upon a poorly argued foundation, possibly even a tautology. There is no doubt that religious syncretism exists and is widespread,but we need to understand it better before it is adopted wholeheartedly as the “solution”to so many current problems.

Rankin Sherling has taught history at Queen’s University and Atlanta Metropolitan State College. He will begin teaching at Marion Military Institute: The Military College of Alabama in the fall.

I thank Rankin Sherling for his vigorous review of In Praise of Mixed Religion: The Syncretism Solution in a Multifaith World. However, Sherling seems to be confused about my purpose. Far from trying to impose a universal system on the world, I propose a method that embraces openness and resists premature closure. I do not have a clear and inevitable end in view only ideas about how to navigate today’s complexities.

My definition of religion is not as rare as Sherling supposes. It is merely different from the weak and limited definition, based upon a notion of Christianity, that we inherit from the Enlightenment. I have provided a way of thinking about religion that...