When we think of the eponymous and venerable Hudson’s Bay Company, the first thing that comes to mind might be beavers and their luxurious and valuable pelts, the daring exploits of explorers who pushed the boundaries of European geographical knowledge of North America, or perhaps the ruthless and somewhat unsavoury antics of its most famous figurehead and manager, Sir George Simpson, for good reason called the Little Emperor. What comes to mind certainly is not corporate sponsorship of the scientific study of the natural world, yet Ted Binnema shows beyond a doubt that scientific activities were very important to the HBC.

Binnema’s interest in the unlikely topic of science sponsored by Canada’s greatest monopoly grew from his interest in the particular scientific endeavours of one man, the enigmatic Peter Fidler, an English polymath of the late 18th and early 19th centuries, contemporary of the famous surveyor and explorer David Thompson. Fidler joined the HBC as a young man in 1788 and spent decades wandering the northern plains of North America from his original posting at York Factory along the chilly western rim of Hudson Bay. He was an inveterate journal writer, chronicling his travels and observations from his life among the distant fur trading outposts and the native peoples. But he was also intensely interested in astronomy, mathematics and meteorology. “Although I could not discover explicit evidence about why Fidler joined the HBC,” Binnema writes, “it struck me as entirely possible that his knowledge of the history of science within the company, and his own curiosity might have influenced his decision.” To gain an understanding of Fidler’s motivations, Binnema studied Fidler’s scientific interests, interests that Fidler pursued within the parameters of his duties with the HBC. “This is when I began to realize that the HBC’s contributions to public knowledge were far larger than the literature had led me to expect.”

Binnema is a professor of history at the University of Northern British Columbia, and Enlightened Zeal: The Hudson’s Bay Company and Scientific Networks, 1670–1870 is the result of years of research into the previously little-studied topic of the HBC’s corporate sponsorship of science. It is not a narrative or a general audience book. Fidler quickly fades from the discussion and we learn very little about the personal lives of the men who populate its pages. Instead we learn about their employment and their scientific endeavours within the evolving framework of the political constraints of the HBC’s monopoly. 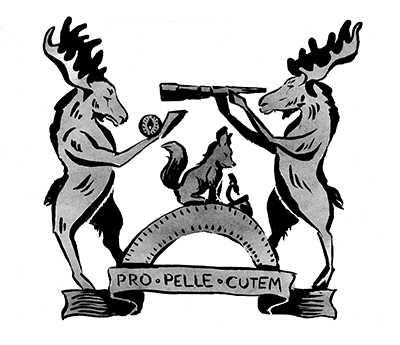 When the HBC was chartered no accurate map existed of the extent of its domains, or indeed of central or western North America. Nor did anyone in Europe know of the geography, climate, flora and fauna of the vast land and its regions, the shores of Hudson Bay to the Arctic tundra, the prairies, the boreal forests, the western mountain ranges and the Pacific coast. The scientific endeavours primarily supported by the HBC involved what we would call the travelling sciences: cartography (which included surveying, astronomy and mathematics), natural history (the study and collection of the plants and animals), meteorology (the timing of the seasons, annual temperatures for air and water, seasonal precipitation, etc.), ethnography (observations of the customs and extent of the Native peoples) and geology. These were essentially efforts to better understand the vast territory and its potential uses, such as the best methods and routes of travel and its agricultural and mineral potential.

Enlightened Zeal is a book that cleaves strongly to knowledge at the expense of understanding. It is not artful and insightful in the human domain, but it is clear, detailed and explanatory of the economic and political limits that bound the HBC’s actions and hence the people who worked for it. (Fur was the valuable commodity that underpinned the company’s success and its fortunes depended upon the whims of European fashion, while the company’s monopoly status was frequently challenged, most notably by the Montreal-based North-West Company in the early 19th century.) The book is a valuable resource rather than a good read, and it should come as no surprise that it is published by an academic press rather than a general trade press. This detailed and technical focus will limit its readership, but it will not detract from the book’s overall contribution to the understanding of Canada’s past.

In fact, the information Binnema reveals about the HBC and its employees is not readily known or appreciated by many who have knowledge or an interest in the fur trade and its mightiest company. The HBC was a great promoter of amateur and professional science, encouraging its employees to take an interest in these activities as well as providing logistical assistance to other professional scientists travelling within its domains in northern and western Canada.

As Binnema wryly observes, the HBC “was not a charity.” It had specific reasons for its ongoing support of science beyond the curiosity of certain employees, and these, naturally, were not merely the byproduct of disinterested altruism. Supporting science had a financial cost, but it also had a corresponding benefit. The most obvious benefit to the company was the positive public relations such seemingly disinterested activity -generated in Britain. Travel within the domains of the HBC for a European would have been extremely difficult without the aid and support of the HBC, which maintained the only outposts in a hostile and chaotic land whose native inhabitants held varied views on foreign travellers. Scientific explorers, such as natural historians, cartographers and researchers from institutions such as the Royal Society, the Smithsonian Institute and the Royal Navy, relied on the HBC for guides, supplies and shelter. In return they paid for these services with positive publicity, or as Binnema puts it, “public tribute.” This gave the HBC “promotional material that no advertising or lobbying could ever replicate.” It gave them the veneer of an enlightened and honourable company instead of a greedy monopoly that deserved to have its charter revoked. “The public tributes paid to the company by ostensibly independent and unbiased intellectual elite did much to enhance the company’s reputation as a positive corporate citizen.” Interestingly, as late as the 1920s, the Danish ethnographer Knud Rasmussen relied on the outposts of the HBC for supplies and mail on his own epic dog-sled expeditions throughout the North and provided this same type of public tribute in the introduction to his books.

The HBC also encouraged scientific interest and activities in its employees because it bolstered their international image to have educated managers and it helped with the “retention of talented men.” By “encouraging their officers to ‘improve’ themselves by, among other things, reading books and contributing to science, the London Governor and Committee ensured that they could attract and retain educated, intelligent, and ambitious men.” Because they worked in isolated and remote outposts, an interest in science kept them in communication with their peers within the isolated network across the sparsely populated territory, and fostered a sense of belonging to a larger community of likeminded individuals, engaged in activities other than the pure commerce of the fur trade. It was good for morale and community and helped fill the dark days of winter.

This naturally leads to the question of why the HBC, more so than the other great chartered -monopolies of the age, considered science a worthy investment. Apart from navigation and sailing directions, the Dutch East India Company had little interest in science; neither did the Dutch West India Company, the English East India Company, the British South Africa Company or even the Russian American Company—other commercial entities that, like the HBC, enjoyed commercial monopolies and exercised political power within their jurisdictions. Binnema would like to see studies similar to his own addressing these and other chartered companies. But I think the HBC might prove unique in the extent to which it supported the scientific activities of its employees and other scientific institutions. Most of the other European chartered monopolies were operating in densely populated regions of the Earth—they were interlopers and temporary conquerors of politically sophisticated societies with political and commercial traditions and networks that predated the arrival of Europeans. The monopolies’ keys to success were more in the realm of the military and political rather than the scientific; they were not dealing with great geographical, geophysical, meteorological and commercial unknowns but with difficulties protecting their status from competing political elites at home and abroad. In North America, by contrast, the geographical extent of the HBC’s commercial monopoly was unknown until the mid 19th century, so the parameters of its commercial domain, and its profits, could be expanded by scientific exploration of the territory under its control.

Since the HBC operated under the auspices of the British government, whose colonial territory they managed, supporting cartography, natural history and meteorology gave them a better knowledge of their own commercial domain, while at the same time serving the interests of their political masters. Britain gained, at no cost to itself, a greater knowledge of its North American colonial territories.

Binnema unnecessarily apologizes in his introduction for the structure of his book, claiming that “deeper research would certainly have revealed errors and distortions.” I would suggest that deeper research, by which he means greater depth on one small aspect of his historical survey, may also have rendered the theme and topic impossible to publish, let alone to understand. No matter how valuable the information, the cost of publishing such a tome would have been prohibitive and would have diluted the perspective of change over time or the appreciation of how science at the continental monopoly ebbed and flowed along with political need and social fashion. Enlightened Zeal may be “a mile wide and an inch deep,” but that is its principle value as a resource.

In academic historical writing, there is often great value placed upon the “depth” of research or study of a topic at the expense of understanding how one “period” of information relates to the other periods that border it chronologically, as if they exist independently from each other and can be meaningfully understood in isolation. But that is the objective of the specialist, and certainly it can be taken to extremes. Binnema should rest assured that his breadth of study rather than his depth of study—his tracing of this one particular aspect of the HBC’s activities and its employees’ lives over the course of the monopoly’s centuries-long existence—has produced its own specialized way of interpreting both the company and people who worked for it; he has achieved depth by way of breadth.

While the immediate readership for Enlightened Zeal likely will be limited to specialists, however, over time it will influence future works, whether they be general histories, popular histories or even historical novels. The scientific networks that were so prominent during many years of the HBC’s operations have been hitherto overlooked, unexplored or not fully understood, but there is no doubt this new perspective will provide a greater and richer understanding of the past—a new setting for appreciating and interpreting the lives of the people who shaped large parts of our country.

Stephen R. Bown is the author of eight books on the history of science, ideas and exploration, including the early spice trade. His latest, The White Eskimo: Knud Rasmussen and the Soul of the Polar North, will be published in the fall of 2015.