Pulitzer Prize–winning author Carol Shields once stated “that language that carries weight in our culture is very often fuelled by a search for home, our rather piteous human groping toward that metaphorical place where we can be most truly ourselves.” Margaret Atwood taps into this fundamental desire for belonging and refuge in her latest novel, The Heart Goes Last. This work of speculative fiction offers both literal and figurative notions of what constitutes the ideal home in a world plagued by economic ruin, uncertainty and an appetite for superficial pleasures.

Atwood is known for her skilful imagining of utopian/dystopian societies, in books such as her recent MaddAddam trilogy and the classic The Handmaid’s Tale, which prompt readers to reflect on how their own worlds may be improved. The imagined society that Atwood creates in The Heart Goes Last is at once familiar and strange. The novel’s dire economic circumstances resonate with the 2008 global financial crisis, while other features, such as her depiction of an elaborate sex robot industry, favour the bizarre.

Atwood opens with a series of epigraphs (including an excerpt from a review of a masturbation device designed like a piece of furniture) that serve as measured reminders that sex machines and fantasy substitutes, rudimentary or not, are nothing new and certainly not science fiction. The novel’s defamiliarizing effect pushes readers, therefore, to revise their perspectives, to see their own world anew and reassess the complexity and force of human desires, especially during times of socioeconomic uncertainty. A unique feature of The Heart Goes Last that distinguishes it from Atwood’s other speculative fiction is that this story first appeared, in part, as a serialized narrative published on the internet by Byliner. The now complete novel uses sudden turns in plot and chapter-ending cliffhangers typical of the serial form. Yet at the heart of the book lies Atwood’s profound commentary about the longing for home and the role that our emotions play in either realizing or undermining this individual and collective dream. 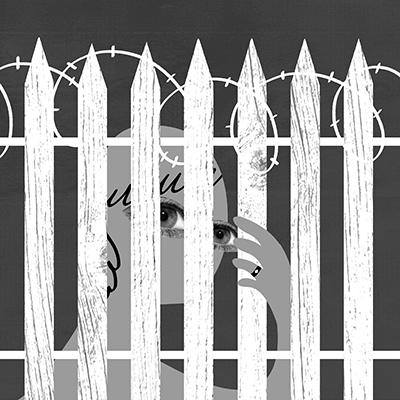 The novel’s main characters, Stan and Charmaine, are a husband and wife who have lost their home and salaried jobs in the wake of a socioeconomic collapse. Living out of their car, selling their blood for petty cash, and dumpster diving for food, the pair work to survive but the stress is taking its toll. While Stan and Charmaine often flee nighttime attacks from thieves and would-be rapists attempting to break into their vehicle, society’s wealthiest sleep soundly, “floating around on tax-free sea platforms just outside the offshore limit.” Hope eventually arrives in the form of an advertisement inviting down-and-out citizens to sign up for “the Positron Project” in the town of Consilience—a closed community in which residents are guaranteed a comfortable home, food on their plates and employment. The only catch is that their living arrangements will rotate: for one month, they will live and work in the town and enjoy their comfortable home; for the next month, they will be segregated into male and female Positron prisons while their “Alternates” exchange places. When citizens join this for-profit social experiment, they can never leave and are prohibited contact with the outside world. In other words, Positron and Consilience come with a life sentence.

In The Heart Goes Last, material comforts must be weighed against individual freedoms in the search for home. Stan is initially hesitant about the terms of Positron’s contract, but Charmaine is convinced that this is their best chance for happiness. She longs for security, which she equates with stylish home furnishings and a healthy bottom line. After living without running water and fearing for their safety, Stan and Charmaine have found their salvation. The fluffy bath towels supplied in the Consilience home “clinched the deal.” Yes, Positron’s promises are enticing. The company’s PowerPoint sales pitch doles out phrases such as “A MEANINGFUL LIFE” and offers an image of a golden egg in a nest, which to Stan’s mind, is a symbol of hope—a new beginning for a prosperous future.

But for Atwood’s more skeptical readers, this golden nest egg invites questions. Literally, nest eggs are real or artificial eggs placed in the nest to encourage hens in their egg laying. Later, readers discover that the Positron prison boasts an ever growing egg farm, and it is unclear who benefits from the project’s entire profit-making scheme. Certainly the citizen-prisoners are not reaping the rewards. They are merely kept busy and reasonably content with fresh eggs for breakfast. Positron’s brand of egg symbolism also brings to mind the cautionary folk tale about the goose that laid the golden egg. Of course, that story ends badly for the goose when the owner, driven by short-sighted greed, kills the bird in order to find the source of the gold and ends up empty-handed. In this light, the Positron Project has the visual trappings of prosperity, but it is merely a well-packaged replication of the outside world with its gross socioeconomic disparities. In Positron, the collective good of its citizen-prisoners remains secondary to the financial interests of the project’s top “investors” who operate outside the rules of the system and use its ideological confines and persuasive strategies for their own benefit. In this way, Atwood’s imagined society is firmly grounded in the current abuses of capitalism by the wealthiest one percent.

Ultimately, how you create your home comes down to choices: the choices that you make and the choices that you are not at liberty to make. It is most fitting, then, that in a story that revolves around the human longing for home that the woman in charge of Positron’s surveillance was a former English major whose thesis focused on John Milton’s poem Paradise Lost, a retelling of the biblical story of Adam and Eve. “Sufficient to have stood but free to fall,” Adam and Eve are lured by the snake and their own desires, resulting in a precarious life when they are cast out of Eden. Clearly, powerful forces can sway individuals’ aspirations and judgements in a world governed by greed and threatened by fear. In Atwood’s novel, the prison system becomes the sad solution for the desperate, while the rest of the population seems equally enslaved to a system-of-getting that brings no altruistic benefit to the larger human community, leaving the majority homeless.

Even if you have enjoyed relative security and comfort for the better part of your life, Atwood cautions that this may not always be the case. Her book asks us to reflect carefully on our larger societal home, its values and how it treats the most vulnerable. In Charmaine’s world, prior to the economic collapse, she worked as the entertainment and events coordinator at the Ruby Slippers Home and Clinic, a chain of assisted-living homes for seniors that uses the ironic motto “There’s no place like home.” While the elderly and infirm are unable to return to their one-time homes, their profound yearning persists and cries out for compassion. Instead, they are met with callous, for-profit solutions. If the journey through life is rarely straightforward, then the figurative home can be as precarious as the physical shelter. In this regard, the superficial paradise that operates within Positron’s confines also reflects the surface-level order that masks the discontent often experienced within the boundaries of committed, long-term relationships. Narrated through Stan’s and Charmaine’s alternating points of view, The Heart Goes Last exposes the couple’s distant and discordant perspectives. The two fail to communicate, and Charmaine admits that there has never been a lot of passion in their marriage. Theirs was a “different kind of love. Trusting, sedate. It went with pet fish … and with cats, perhaps. And with eggs for breakfast, poached, snuggled inside their individual poachers. And with babies.” This marital home front quickly unravels when Stan begins lusting after the mysterious female Alternate only to discover that his wife has been having an affair with the male Alternate on their monthly switch-over days. Eventually the divided couple is caught up in an elaborate plot devised by internal and external forces working to disrupt the Positron Project for its human rights violations and other criminal activities. In a world where superficial perceptions and immediate self-gratification rule the day, readers begin to question if authentic, long-term human relationships are possible, especially if Positron’s sexbots and mind-manipulation treatments will eventually replace partners with automatons.

Through Stan and Charmaine’s “piteous groping” to find shelter for their lonely hearts, Atwood has crafted a powerful dystopian parable that exposes humanity’s selfishness and short-sighted failings. Ultimately, The Heart Goes Last pushes readers to contemplate the choices that they make and the limits that are imposed on their choices by life circumstances, by others, and by pervasive ideologies that have shaped their own perceptions. Home, in all its forms, requires careful scrutiny, altruism and responsibility. In the end, we must be attentive to our heart’s desires but also keep our most selfish impulses in check if the sought-after security and comfort are to be realized and sustained. Only then, will we be truly connected as a society that is “at home” with ourselves and with each other.