Lady Jane Franklin would be thrilled to be told of the discovery of HMS Erebus, the ship on which her husband, John Franklin, disappeared in 1845 while searching for the Northwest Passage. She would read Franklin’s Lost Ship: The Historic Discovery of HMS Erebus with avid interest because, like the authors John Geiger and Alanna Mitchell, she believed that Franklin’s legacy should serve as a lesson to a patriotic country. As she wrote to her prime minister in 1859, the 129 men who died on the expedition “have laid down their lives … in the service of their country, as truly as if they had perished by the rifle, the cannon-ball, or the bayonet.” Franklin’s Lost Ship elevates the Franklin disaster to a national success story in a narrative sympathetic to the Victorian imperial visions of Franklin’s day. What Lady Franklin would be puzzled by, of course, is that the country in question is Canada and not Britain.

Like Victorian accounts of Arctic exploration, Franklin’s Lost Ship is full of praise for the search’s numerous patrons, both commercial and governmental, who found Franklin’s flagship in September 2014. Led by Parks Canada underwater archaeologists, the 2014 Victoria Strait Expedition included the Canadian Coast Guard (and their icebreaker, CCGS Sir Wilfrid Laurier), the Canadian Space Agency (donating satellite time), the Canadian Hydrographic Service, and agencies from the Canadian Armed Forces and the Department of National Defence. These public agencies partnered with private groups, chief among them the Arctic Research Foundation, established by Blackberry cofounder Jim Balsillie, and the Royal Canadian Geographic Society, of which John Geiger is the CEO.

The RCGS was responsible for publicity and brought on board more private partners: Shell Canada and the luxury cruise ship One Ocean Voyager, as well as the W. Garfield Weston Foundation. In addition to being CEO of the RCGS, John Geiger is known to many as the coauthor with Owen Beattie of Frozen in Time: The Fate of the Franklin Expedition. Frozen in Time offered a compelling account of Beattie’s forensic anthropology investigations into the Franklin disaster and raised popular interest in the topic for a new generation of Canadians. 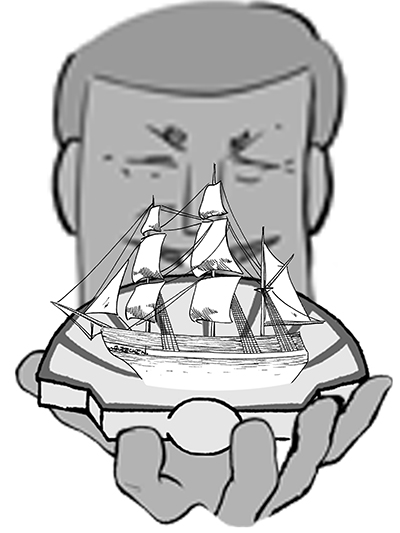 “Finding Franklin,” write the authors, “is Canada’s birthright.” The book is built on a double narrative alternating between the successful Canadian search expedition and the actual Franklin expedition, its disastrous unravelling and the early British searches. While Franklin is held up as the hero of the latter, the hero of the 2014 search is former prime minister Stephen Harper.

Franklin’s Lost Ship devotes much attention to Harper’s personal interest in Franklin and lingers over moments such as the one below, wherein Geiger (referred to in the third person) had joined Harper and his ministers on their 2013 northern tour:

Around an enormous bonfire built by the rangers, on the island where so many of Franklin’s men had died, the prime minister and Geiger spoke about the Franklin problem, the frustration that no ships had been found, the mystery and grotesque nature of the expedition’s end … It was an amazing experience, huddled around the fire, with Environment Minister (and Gjoa Haven native) Leona Aglukkaq, Chief of Defence Staff General Thomas Lawson, the prime minister’s wife, Laureen Harper, and others nearby, talking Franklin.

We are told that Franklin has come to represent the spirit of Canada that Harper admires:

He sees Franklin as a proxy for the daring, uninhibited, heroic Canadian—one who sails boldly into impossibly unforgiving territory, not knowing if success is even possible, not caring what it costs him, willing to risk everything in the hope of great reward. It is the story of these modern-day Franklin explorers, and, some would say, of Harper too, a leader who fashioned political power from the risky marriage of two parties and held on to it.

It is an interesting choice, linking the visions of two controversial men whom you see as heroes, especially when one of them was at the helm of the worst disaster in exploration history. But the Franklin we glimpse in this book is very much the idealized Victorian version that Lady Franklin would recognize. This despite that in the last 160 years there has emerged a more critical international consensus about Franklin’s personal shortcomings as leader and the larger cultural and technological failures of the admiralty’s Northwest Passage obsession.

The defeat of Harper’s government is seen by many as a rejection of his administration’s northern policies.

Harper had invested in his narrowly nationalist Franklin myth since launching the first modern Parks Canada search in 2008. Harper’s dogged commitment to including Franklin in his northern policy, despite growing criticism from diverse quarters, was vindicated in 2014 when Parks Canada underwater archaeologists Ryan Harris and Jonathan Moore first spotted the outlines of Erebus lying on the seabed in Queen Maud Gulf. Part serendipitous and part the result of hard work, the stunning discovery of Erebus was ironically aided by the stubbornness of the ice and poor weather, which had left the smaller vessels unable to reach the intended search area and stuck instead near O’Reilly Island. On the shore, archaeologists and crew located a curious iron artifact, which they realized could only have been torn off a ship while it was breaking up, meaning that a wreck lay nearby. Geiger and Mitchell give a good sense of the collective energy that made the discovery possible, as each person would contribute their part of the puzzle and hand off to another, leading to global headlines and well-deserved celebration. This makes the lionization of Harper seem even more out of place with this otherwise collective endeavour that the authors describe.

Franklin’s Lost Ship was published on October 27, 2015, a week after the federal election saw the definitive defeat of Harper’s Conservative government. Overtaken by these political events, the book ironically shares the fate of lost polar expeditions whose survivors would re-emerge in a political landscape transformed by revolution or war. Ernest Shackleton had left for the South Pole in 1914 just as the Great War had begun, and when he finally reached safety in 1916 he asked, “Tell me, when was the war over?” Came the reply: “The war is not over … Millions are being killed. Europe is mad. The world is mad.” Between the time the book had gone to press and the publication date, Harper’s Conservatives had experienced their own ­shipwreck.

Ultimately this vision of modern-day Franklin explorers is not modern, but rather is suitable for a Victorian oil painting hanging in a private members’ club. Canadian Geographic exploited exactly this nostalgia in its photographic tableau of a Victorian painting, The Arctic Council Planning a Search for Sir John Franklin, starring the worthies heading up the public and private agencies in the 2014 search, only with little sense of irony. The book evokes the heroic age of exploration in the close attention it gives to the photogenic wreck and the sublime icescapes in which it lies, beautifully photographed throughout. Enthusiasts of polar exploration and armchair explorers will enjoy the lavish visuals, which include historic images as well as photos of many of the artifacts collected by Parks Canada, the most prized being the ship’s bell and guns.

The book essentially presents Erebus as one of the opportunities opened up to us by global warming.

Franklin’s Lost Ship is itself a relic of the 2014 Franklin search, revealing the institutions invested in funding this expensive enterprise and perhaps even the omissions that their participation introduced. The defeat of Harper’s government is seen by many as a rejection of his administration’s northern policies, with all three northern members of Parliament losing their seats (Aglukkaq came in a distant third in Nunavut). Among the most contentious northern issues was the Conservatives’ muzzling of scientists working on “politically sensitive” research, particularly climate science, and their attempts to defund climate change research at the Polar Environment Atmospheric Research Laboratory, which had its funding eliminated by one funding agency, but was then able to secure $5 million for an additional five years of operation from a different government agency. By comparison, in 2015 Harper promised to build in Gjoa Haven a Franklin Centre for $16.9 million for five years plus $1.5 million thereafter each year for operation.

The epilogue of Franklin’s Lost Ship registers this silence on anthropogenic climate change in its curiously vague title, “The Age of Change.” What is this? “The change reshap[ing] the mystique of the Arctic and the Northwest Passage—embodied in the find of Erebus” is referred to only as part of a list of contemporary northern trends, but it is climate change.

The Arctic is becoming less remote, less forbidding. No longer is it murderous and nightmarish. It is what the West used to be: ripe. The fabled path to the Orient is no longer just a fantasy; it is becoming a reality. As a result, others want in.

Here global warming appears as the bearer of ripe fruit: energy resources, new commercial waterways, and other opportunities for industrial and touristic development, free of the murderous and nightmarish ice. The book essentially presents Erebus as one of the opportunities opened up to us by global warming.

One of the private partners that Geiger brought on board the 2014 search was Shell, which still owns the largest number of licences for oil and gas exploration in the Arctic. At the time Franklin’s Lost Ships was being written, Shell was still actively pursuing Arctic drilling plans, which it called off after a disappointing test drill in September 2015. The RCGS’s involvement with Shell in 2014 included plans for Shell to develop educational materials on Erebus and the Arctic for free distribution to Canadian schools. In 2013 the RCGS and its Canadian Geographic Division (which publishes Canadian Geographic) also began a controversial partnership with the Canadian Association of Petroleum Producers, producing with the oil lobbyist group curriculum materials distributed free to schools across Canada.

During the follow-up “Mission Erebus and Terror 2015” led by Parks Canada, Shell and the RCGS had disappeared from the list of search partners (although, based on Parks Canada’s application to the Nunavut Impact Review Board, the RCGS appears to continue being responsible for producing Parks Canada’s educational materials about Erebus). The parting of ways appeared to coincide with a controversy in which a journalist at the Toronto Star, Paul Watson, alleged that he had been effectively censored by editors while investigating the role Geiger and the RCGS played in locating Erebus. Watson also revealed that Balsillie had complained to environment minister Aglukkaq in April 2015 that the documentary film Franklin’s Lost Ships on CBC overstated the role of Geiger and the RCGS in the discovery of Erebus and downplayed that of the public agencies and researchers.

No tale of polar discovery is complete without a priority dispute—the most famous is that between Cook and Peary in their 1909 race to the North Pole (both men turned out to be lying). In Franklin’s day, the dispute had centred on who was the “first” to locate the Northwest Passage—Franklin, and those who came looking for him such as John Rae or Robert McClure, all had their champions. The suggestions that Geiger may have exaggerated the RCGS’s role in the discovery of Erebus is a tepid priority dispute by comparison, but one that is entangled with real concerns about the Harper government’s interference with public research and media. Franklin’s Lost Ship, its inclusions and omissions, is as much an artifact of the Harper government’s approach to Arctic issues, as it is a coffee table book about locating Franklin’s flagship.

A note of clarification