In the finale of his first book, the Governor General’s Award–winning The End of Absence: Reclaiming What We’ve Lost in a World of Constant Connection, author Michael Harris wrote this: “Every technology will alienate you from some part of your life. That is its job. Your job is to notice. First notice the difference. And then, every time, choose.”

Harris’s second book, Solitude: A Singular Life in a Crowded World, swaps the notion of solitude for that of absence, but otherwise continues on much the same track, challenging readers to remain awake and alert to the seismic changes that layers and layers of new technologies are making to our brains, our relationships, our social norms, our cultures. His approach is an appealing patchwork of latest brain research, personal anecdote, journalistic reportage and sly but never cynical observation. It makes for a very readable mélange, even if the final line of his first book would serve just as well as an ending for this one.

The author and I come from completely different cohorts: I am almost twice his age. That means I had many decades of unconnected life to enjoy before an academic from Texas first whispered the word “email” in my ear in the early 1990s. Even now I have no interest in Facebook, Twitter or WhatsApp. Harris, at the age of 36, has been steeped in online communication most of his life and so have all his friends and colleagues. So much so that, in his first book he reported that his friends hated it when he unplugged for two weeks in order to read War and Peace, and in his second he affirms that “a trek into nature is assumed to be proof of some anti-social tendency.” Come on, Michael. Really?

Harris is fighting ancient social norms in praising solitude. It was God who fretted after placing Adam in the Garden of Eden: “It is not good that the man should be alone.”

Well, yes, really, to some extent. From 2006 to 2014, Harris reports, the world went from having 18 percent of its population online to having 41 percent online. WhatsApp reached one billion users in 2016. Eighty percent of Americans are on their phones within 15 minutes of waking up, he tells us, and subjects in a University of Virginia study preferred giving themselves electric shocks to being alone in their heads. In the United Kingdom, the radius of territory outside a home in which children can freely wander has shrunk 90 percent since 1970. Meanwhile—you can try this out yourself—type “fear of being” into the Google search bar and it will auto-complete to “fear of being alone.” (Given all this gloom, it is at least marginally uplifting to see that France, that most civilized of countries, has enacted a new law requiring large companies to negotiate with their employees reasonable limits on answering work emails in off-hours.) 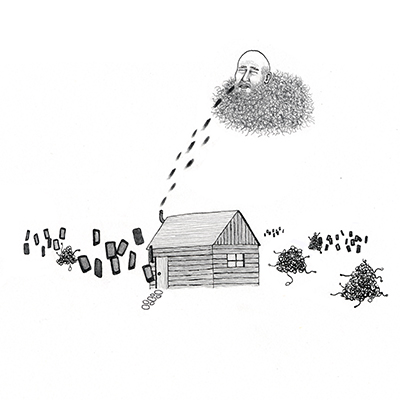 In spite of his somewhat magpie approach, Harris does have a serious point to make in his second book, and that is that solitude is of enormous value to humans in three ways, in spite of our relentless grouping tendencies. Number one, solitude generates new ideas—think Beethoven, Dostoevsky, Kafka, etc. Number two, it creates self-knowledge—what Jung described as “individuation: the ability to appreciate yourself as a creature separate from your species.” Number three, it strengthens bonds with others, which sounds paradoxical but turns out to be the most interesting of the three values. Harris, with the help of the late English psychoanalyst Donald Winnicott, who wrote in the 1950s, explores the human capacity to enjoy solitude that develops when people know they are loved and appreciated. The terror of loneliness is alleviated by the memories and thoughts we have of those we care for, memories that can date from our infancy and childhood or thoughts relating to our current adult lives. I recall an elderly widow telling me, “I loved spending time alone, when I knew he was in the next room. Now it’s very hard.”

There is a fourth way of thinking about solitude that Harris articulates: he calls it a “resource” and it leads to his most powerful metaphor:

We have learned to harvest the solitude of others. Profiteers produce social grooming technologies, and agents of distraction swarm around us. Solitude is consumed and depleted as surely as Brazilian rain-forests are toppled and the tar sands of Alberta are sucked dry. This is how we make an Easter Island of the mind.

In spite of the author’s desire to make readers feel the value of solitude and the urgency of trying to protect it, some of the liveliest parts of the book are those where he puts on his journalistic hat and heads in the other direction. In his native city of Vancouver, Harris takes us to a stationery store on the east side, where once a month the owner lays out classic Underwood and Remington typewriters and opens the door to hipsters who flock to attend a letter-writing workshop. “I didn’t know there wouldn’t be a delete button,” muses one of the participants, but once he finds his typing fingers, he writes “This is my first letter. My first real letter ever. Lucky, lucky you.”

And because of my bibliophilic tendencies, I was particularly drawn to Harris’s ninth chapter, “Social Stories,” in which we see the new sharing technologies potentially devouring one of the most solitary art forms ever developed: fiction writing. Harris focuses on one Anna Todd in Fort Hood, Texas, a 24-year-old soldier’s wife, who began posting chapters of a romantic story she was writing to a social platform called Wattpad. They were downloaded more than one billion times, with responses rolling in from readers everywhere, suggesting plot twists and corrections, which Todd took up with enthusiasm. When the Wattpad people finally noticed the heavy traffic, they became her agents and sold the work to Simon and Schuster, who turned it into four hard-copy novels now sold in 30 countries. When Harris spoke to Todd about her experience with a “real” publisher, she commented, “It’s so strange to have only one editor. I’m used to having thousands of editors, you know?”

Harris, as a traditional, isolated writer, is gobsmacked by this development, or at least says he is, but I really wonder if we need to strike up the death march for literary fiction just yet. What Anna Todd is collaboratively writing is pop fiction, fan fiction, the written equivalent of daytime soap operas, and of course that kind of material generates huge followings and big bucks. People who read serious literature (as well as non-fiction) have been in the minority since the birth of print, and will always remain so, it seems to me. Will publishers continue to support solitary writing? Let us hope.

From there, Harris goes further down the rabbit hole to visit the Institute for the Future of the Book, which is looking at the literary experience from the consumer’s point of view and has developed a platform that allows all readers to share their marginal comments about the presented works, known as networked books, “a sort of live and permanent book club,” as he describes it. And this is not fan fiction; the example Harris uses to illustrate this rapidly evolving social method of reading is, in fact, Don Quixote. Bob Stein, the creator of the platform, had these words to say: “People think they want to be alone on the page, but once you’ve had the experience of seeing how commentary can enrich your understanding—I’m telling you, this changes everything. It’s deeply experiential.” It is easy to see how a writer who has spent the last two years of his life struggling to produce deathless prose in an attic would be spooked by the idea of readers coming at his work through a thicket of online commentary. On the other hand, anything that encourages deep and active engagement with thoughtful texts is probably worth exploring.

Harris is fighting strong social norms in defending and praising solitude, norms that go back a long way before the internet. (As he comments himself, it was God who fretted after placing Adam in the Garden of Eden: “It is not good that the man should be alone.”) Contra God, Harris wants us to daydream more, to eschew Google Maps and allow ourselves to get lost, to cultivate our inner weirdness. “We seem to need agitation, strangeness, rough texture, in order to grow, to explore,” he writes.

On the prescriptive side, suffice it to say that all Harris can think to do is channel Thoreau and retire to the woods of Pender Island for a week. His report from the battlefield is about as banal as yours or mine would probably be in the same situation: “Twenty-four hours in, I am unabashedly holding conversations with myself. It remains unclear whether this is a sign of a declining or ascending mind.” In the utter darkness of his cabin, he tries to follow Robert Frost’s advice to “become acquainted with the night,” but finds to his chagrin that “the night has no particular wish to become acquainted with me.” As in his previous book, Harris gives readers a great deal of fodder to munch on, but ultimately—if we are moved by his arguments—we are on our own. “The experience of solitude is by ­definition a personal one,” he writes, “so the struggle to preserve it must largely come from an individual.”