Readers with a penchant for publishing-industry trivia may recall a story from 20 years ago, about an enterprising Canadian author, Sandra Gulland. The author of a trilogy of best-selling books about Josephine Bonaparte, Gulland hit upon an ingenious scheme to ensure her sophomore novel disappointed as few of her readers as possible: she focus-grouped the manuscript with an audience committed to close reading (and book buying): book clubs. The technique worked so well she used it again for her third book. It seemed both a creative way of diffusing writer’s block, and a curious signal in the business of making and selling books, a symptom of a new cultural aversion to risk. Certainly it was prescient. Consumer analytics—a live, tickertape update on focus groups—now shapes much of the culture we consume. We prefer these days to leave risk to youthful, cortisol-addled financial traders (who can sink companies, and lives). The business of culture, we seem to think, should be risk-free. And so should its content. No surprises for the reader or viewer! Other than the ones she expects and demands.

In this profit-maximizing, focus-grouping age, gone is the promise of “the long tail” at the end of a sales graph—recall the book by that name, by Wired editor Chris Anderson, which saw the future in a business model that, in essence, relies on selling 100 copies of a thousand books rather than 1,000 copies of a hundred. It has given way to the era of the mega blockbuster, in publishing, film, music.

Which leaves those of us crunched into that tiny triangle of a tail-of-overstated-length in an interesting place. We have the distinction, and satisfaction, of occupying a vital cultural space. We thrive in those narrow margins of risk taking; and yet arguably our existence is more precarious than ever before.

In the obstacle-fitted course that is available to small, high-minded magazines, the Literary Review of Canada reached a milestone in 2016; it turned 25, to great fanfare: a gala in Toronto, coverage in the papers, the release of a special literary supplement, The LRC 25. A year later, talking of risk, the magazine has seen some more sobering passages. This summer and fall we found ourselves confronting an organizational and funding challenge that forced us to suspend publication of the September issue. We said goodbye to Helen Walsh, our spirited and dedicated publisher of 18 years, who, along with my much-admired predecessor, Bronwyn Drainie, raised the LRC through its unruly teenage years. And we bid a reluctant farewell to our copy editor, Madeline Koch, and, soon, to our designer, James Harbeck. For good measure, we also moved from our old office space (which, in another of those signs of the times, is being turned into luxury rental units).

It has been a tumultuous period, but it is also a hopeful and exciting one. The LRC’s board of directors is launching an ambitious strategic review of the magazine and its business operations, as well as a serious fundraising campaign. It has also brought back an LRC stalwart, Mark Lovewell—interim editor, co-publisher, board member, writer, donor; is there a hat Mark hasn’t worn here?—as publisher to help see the magazine through this complex transition. Other LRC veterans, including Bronwyn, have returned to do the same, and recent additions to the community, such as associate editor Beth Haddon, have stepped up their involvement. All of us believe this work will pave the way for an energetic new phase. And about that missed September magazine—we will instead produce an extra edition in February, to replace the usual winter double issue. (Annual subscriptions will be extended accordingly.)

The LRC certainly has a respectable history of negotiating successfully for its life. The magazine that was launched in 1991 as a kitchen table venture by political scientist and historian Patrice Dutil was handed over to Carleton University Press by its founding editor when it outgrew that home, then handed over again by the university, when the press shuttered, to a group of editors and co-publishers in Toronto. The 18 years since, too, have followed the beeping course of a heart monitor: rise and fall and rise and fall.

In one sense, at age 26, the magazine is now facing a natural stage of development—what two  American authors described in the early aughts, long before the travails of millennials became demographic catnip to marketers, as a “quarterlife crisis.” It is easy to view the LRC’s predicament against the projections of doom about newspapers and glossy consumer magazines, but life in your mid-twenties can be full of both existential and pragmatic questions. And this has always been a different boat we are in: a little narrower, a little more tippy, a little rougher, if also more thrilling.

Magazines of this ilk seem to exist by sheer force of their own will—the cyclostyled ones (our distant cousins) distributed by samizdat in the U.S.S.R., fumbling their way from hand to hand in the Soviet night; the plucky North American ’zines of the 1990s, less important but no less urgent; the highbrow book review papers that are more our immediate kin, some of which, across the pond, manage (through fantastically imaginative writing and editing, underwritten by fantastically deep trust funds) to eclipse the circulation of newspapers.

That irrepressible will of magazines, of course, is that of their readers and writers and editors and publishers, and it is little more, ultimately, than the love of ideas, of words, of a lively interchange. This magazine, like others of its class, has existed always for, and because of, its readers and writers. The loyal support of this community has not only kept the LRC alive but encouraged and indulged the editorial risks it takes in publishing a musical work about a train derailment by the composer John Beckwith; or Dennis Duffy’s delightfully rangy essay on the myth of 1812; or Emily M. Keeler’s wonderful, century-spanning consideration of a literature of overwork in this issue; or the audacious yet clear-eyed critique of CanLit’s colonial predilections forthcoming from Stephen Marche in the next.

These days—a small grace note—the LRC has won some nods outside of the inner sanctum, too. Thought-provoking articles published in the LRC are finding their way into wider arenas, to the international audiences of Bookforum and Arts & Letters Daily and Architecture Daily. In the spring, two of our essays, by Lev Bratishenko, and by Ian Gold and Suparna Choudhury, won honourable mentions at the National Magazine Awards. (Decent, considering we nominated only three.)

The work being undertaken by the board, the staff, and friends of the LRC, will sustain that momentum, and allow the magazine not only to survive but flourish and grow. How far it goes, though, depends on all of us—readers and writers and creators and supporters.

The wonderful thing about a magazine like the LRC is that one does not have to be a mogul to sustain it. (Although, one or two moguls would not hurt, and if you happen to be one, do not restrain yourself.) The simple act of buying the magazine or making a donation goes a long way. No partnerships with luxury watchmakers here; aside from the granting agencies that make our work possible, we depend on the simple economics of paid subscriptions, and renewals, and donations. (Gift subscriptions count, too, it is worth mentioning as the holiday season prowls toward us.) There are all sorts of ways the magazine’s community can help (see page 23). And those of you who support us through your writing, your artwork, your poems, already have our undying gratitude, of course.

What we can promise in return is a magazine that will engage and provoke, enlighten and, above all, surprise its readers. Moments of crisis can be clarifying and we have used this one to refine our goals, to aim even higher. We have a wonderful slate of stories in the coming months: pieces on the energy economy, and unmade maps of Canada, on laboratory dinosaurs and Canadian snacks. The brilliant essayist Michelle Orange joins us in a conversation reflecting on women and criticism; the philosopher Ramin Jahanbegloo explores forgiveness through the prism of an unjust prison term in Iran; and the novelist Pasha Malla introduces us to a 20th-century literary master. In an age of shrinking patience and column inches, the LRC plans to give even more space to in-depth, lively, and opinionated discussion of books and ideas. We look forward to sharing this next chapter with you.

Sarmishta Subramanian has been an editor at Saturday Night, The Walrus, National Post, Chatelaine, the Toronto Star, and Maclean's, where she remains an editor-at-large. She has also produced radio documentaries for CBC's The Sunday Edition. She was the editor in chief of the Literary Review of Canada from 2016 to 2018. 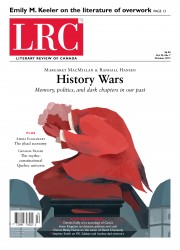