Our snacks are under attack. Sugar is a modern-day super villain, processed foods are the new tobacco, and it looks as if the potato chip’s heyday is coming to an end. Many will see this as a small snippet of good news in the current daily deluge of bad, a sign that the fight against corporate control of our food systems is finally paying off. Snack food has, after all, become a potent symbol of the industrial food chain, as well as a key battlefield, since snacks have been blamed for a range of modern problems, including obesity and Type 2 diabetes.

There is also a more generalized anxiety that, somehow, processed food has disrupted the natural order that involves families bonding over the pleasures of preparing and eating natural and homemade dinners together. That’s a pretty rosy picture, but as University of Winnipeg historian Janis Thiessen argues in her new book, Snacks: A Canadian Food History, it is neither an accurate depiction of most people’s pasts, nor a practical ideal for the many who cannot afford the time or money to make this a reality in the present day. Further, a close look at the history of snack production in Canada reveals that it fails to neatly fit into the oft-accepted narrative of Big Food versus the people. So, maybe we should think twice before gleefully celebrating the demise of the Cheezie.

The snack attack, Thiessen argues in her book, is often launched with arguments that oversimplify and are ahistorical. Her history complicates the narrative by closely examining the history of several Canadian snack greats—Hostess, Old Dutch, Robertson’s Candy, Ganong chocolate and Hawkins Cheezies, to name a few—to demonstrate how the Big Food story minimizes the role played by independents, farmers and the workers employed in the snack food industry—at least in Canada. 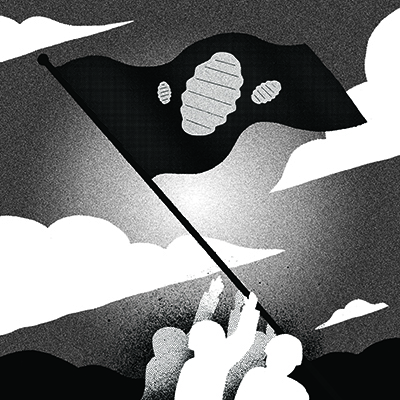 The 1950s potato chip boom is a great example. Demand for salty snacks was on the rise, thanks to the post-war demographic boom of coonskin-cap-wearing children, who needed entertainment and a quick energy fix. That demand gave rise to a swath of independent chip manufacturers—a sector made possible by new machines that promised to help entrepreneurs make “greaseless” potato chips in relatively small spaces so they could “turn potatoes into CASH!” This was not entirely dissimilar to the pre-war automated doughnut machines that led to a host of doughnut shops, which historian Steve Penfold wrote about in his 2008 book, The Donut: A Canadian History. The potato chip boom probably looked a lot more like the modern-day craft beer movement than anything out of the Big Food narrative, although, of course, this diversity eventually fell victim to consolidation as large companies entered the market.

Even then, there were interesting instances of resistance to foreign corporate ownership, notably the case of Federated Fine Foods, a chip company that was owned by Manitoba potato growers. The company seems to have been a creative attempt to control the means of production, instead of selling crops to food processors and packagers who, traditionally, make the bulk of the profits in the snack food chain. Those agri-processors also have a tendency to consolidate other, smaller companies with a view to establishing a monopsony—a single-buyer market in which they set the price, wresting all economic agency away from the farmers. Even the American-owned Old Dutch, Thiessen argues, posed a wrinkle to conventional thinking about agri-business, since it behaved like a “local business” by using Canadian raw ingredients and labour and, instead of establishing an abusive monopsony and relying on American potatoes, the guiding principle by which it operated was cooperation—with both labour unions and farmers. In Winnipeg, it was even described by workers as having provided a “sense of community.”

Although Thiessen doesn’t actually make this argument in her book, it is hard to read through this history and not think about Canadian snack foods in connection to national identity. We love every little detail of difference between us and our neighbours to our south and the fact that our snack foods, like our Bloody Caesars and hockey, are distinct. We have our Vachon Jos Louis cakes, our Coffee Crisp, our Canada Dry and Pop Shoppe and dill pickle chips (Thiessen’s favourite flavour)—not to mention the cultish devotion to Hawkins’s hard Cheezies (as opposed to the puffy kind), an innovation that was made here. We can also claim heart-shaped Valentine’s Day chocolate boxes as our own contribution to the culture, via Ganong. And fruit-flavoured potato chips? Ours too, thanks to Hostess, which launched those in the 1970s. (Orange, cherry, and grape, in case you’re wondering.) Granted, that invention didn’t have legs. Now that we live in the age of adventurous eating, though, it may be an idea that should be revived, a thought that seems to have occurred to Hostess’s new owner, Frito-Lay. It recently held a contest for Canadians to nominate their wildest flavour ideas, resulting in such unusual potato chip flavours as Perogy Platter, Grilled Cheese & Ketchup, and Maple Moose, a savoury-sweet combo that rivals grape for weirdness.

Other companies made bold moves in marketing, notably Old Dutch, which sponsored Kids Bids, a Canadian television game show that featured local children bidding on new toys using discarded Old Dutch wrappers and box tops. To a modern reader, that premise is probably about as appetizing as grape-flavoured potato chips, mainly because snack food-sponsored programming that targets children has been under fire for years. Wanting to know how the children actually felt about their participation, though, Thiessen tracked down former Kids Bids contestants and interviewed them. Many had positive recollections, since…well, they walked away with toys—sometimes bikes—that their parents wouldn’t have been able to afford. Much in the way couponing is a way for people who don’t earn high wages (or any wages) to buy items normally out of their price range, collecting and organizing Old Dutch wrappers gave lower-income families an opportunity to work together towards an otherwise unaffordable luxury, Thiessen’s findings indicate.

Despite this, Kids Bids would be a non-starter today. The snack-food industry is always operating from a position of defence these days, a pretty major shift from, say, a few decades back, when they were generally considered a relatively wholesome childhood treat, in moderation.

But has the villainy of snacks been overstated? Well, that depends on whom you ask. Potato chip companies argue that their products contain more nutrients and fibre than most breads, making them a reasonable snack for teens. They also point out that potatoes, even when fried and salted, are both “real” and “food.” Even the common-sense test proposed by the food guru Michael Pollan, author of The Omnivore’s Dilemma and Cooked—to eat better by adopting a pre-modern diet and refusing anything your grandmother wouldn’t recognize as food—has its problems. As many (including Thiessen) have pointed out, there are now grannies born in the 1970s, who might have grown up on grape chips and Pop Rocks. Or, perhaps your grandmother grew up in an area where food was scarce and she suffered from malnutrition. Some people don’t have the luxury of refusing food based on how it was processed or what it looks like. Buying organic and local food and then preparing it at home requires both time and money, which is in short supply for many families.

The agri-business typified by the snack industry may be controversial, but it has also put a lot of affordable food on the table over the years. Thiessen cites food historian Rachel Laudan who argues that the “culinary Luddism” movement romanticizes the food ways of the past, since, in all but a few eras, the vast majority of humans had “mean, short lives” and were constantly “afflicted with diseases, many of which can be directly attributed to what they did or did not eat.” Those who could afford food spent a lot of time doing all the processing of that food at home, a task that fell largely to women. For many of us, this is not exactly a past we’d like to relive. Parenting and work are already challenges, without adding the pressure of making homemade bread to the duty of bringing home the bacon. Those who don’t have the time or money to go for homemade foods often feel judged, made to feel as if they are failing their children.

None of this is to say that Thiessen sanctions the industrial-food complex, which makes snacks easier and more affordable than fresh foods. Her question: What is the use of telling people who cannot afford to choose the approved foods that they should buy local or organic foods? By framing it as a choice, when it isn’t for many, it places all the responsibility on the people, not the system, which makes healthy choices difficult, if not impossible.

Finally, who has the right to judge? A meal of foie gras, duck-fat fries with fleur de sel, followed by an apple pie sundae (yes, that’s a real thing—served recently at Aloette in Toronto) is called an epic meal; a Big Mac combo followed by an Apple Pie McFlurry is decried as the end of civilization. Although McDonald’s lists its calories and most fashionable bistros do not, it is the former that is blamed for obesity. What we are really talking about, then, is not calorie counts but class position and “taste,” and the relationship between the two. Thiessen sums all this up with a personal anecdote about her father, who caught gophers for cash and used the money to buy soda pop and snacks instead of giving it to his family, who could have used it. She asked him why:

I don’t remember the exact words of my father’s response, but I do remember being told that everyone needs some pleasure and enjoyment in their lives, and that no one deserves our moral judgment.

Indeed. Indulging in a snack, for many people, represents a rare moment of pleasure, to be enjoyed on breaks, nights off, and at gatherings with friends and family. Thiessen points out that snacks are a staple at celebrations and holidays, where they are shared between people who are making connections. Continuing to enjoy them represents a quiet insistence on indulging in pleasure, even faced with culinary narratives that stress hard work, family values and self-denial—the Protestant work ethic applied to food. In fact, choosing pleasure in an era in which culinary discourses are really discourses of virtue is practically an act of rebellion. Snackers of the world, unite!

Christine Sismondo is the author of America Walks Into a Bar: A Spirited History of Taverns and Saloons, Speakeasies and Grog Shops (Oxford University Press).