Son of a Trickster

The main character of Son of a Trickster, Eden Robinson’s third novel (and the first in a trilogy), is 16-year-old Jared, renowned weed-cookie baker and adolescent mess. But we first meet him, briefly, when he’s five, learning that his maternal grandmother has never liked him because she believes he is Wee’git’s son. When they’re alone together, she addresses him as the evil spirit she knows him to be: “If you hurt [my daughter], I will kill you and bury you where no one can resurrect you.”

In an interview with CBC, Eden Robinson explained Wee’git, the transforming raven: “ ‘Trickster’ stories in Haisla and Heiltsuk culture were all about protocol…They were told as funny, crazy stories, to teach you about our nuyums, or protocols, by having a character that broke all of them. And I was trying to bring Wee’git into a modern setting. To see what would happen if he was running around in the world today.”

By the next chapter, when we return to Jared as a teenager, life has become tougher and less stable for everyone. His parents have split up, his dad has lost his job at the Kitimat Eurocan plant, along with 500 others in the town, and is now hooked on oxycodone following a workplace injury. Jared’s stepsister is about to have a baby, and his mother’s house is full of lodgers, one of whom has made holes in Jared’s bedroom wall to spy on him. He bakes weed cookies to help his dad make rent, but he can’t use his own house for his culinary enterprise because his mother and her dealer boyfriend would eat them all.

It sounds grim—and for the characters living it, it is. But there is also a lot of love, and comedy. Jared and his mother, Maggie, have a tight bond, with hilarious dialogue that fizzes with witty wisecracks and smartass sarcasm. To other people, Maggie is one scary lady: in one scene, she grotesquely but inventively punishes a man who tries to break Jared’s ribs by nail-gunning his feet to the floor. The violence is graphic but mundane; rather than being titillating, it is a fact of life that’s neither condoned nor exoticized. This skill of observation is one of the novel’s strengths, and it is demonstrated in Robinson’s ability to portray people in economic or social insecurity without turning the characters into unrealistically saintly people or caricatures.

In Robinson’s grim, topsy-turvy, and darkly humorous world, Jared, then, is the grown-up, and his mother and father are the children who haven’t yet learnt to self-regulate. They have all had some worse-than-average luck, and some strange problems, not to mention the ongoing post-colonial trauma cycling through the generations that is perpetually lurking in the background (or foreground). Yet Jared manages to find room for empathy for others. His mum is always telling him, “The world is hard. You have to be harder,” but it doesn’t quite work that way for Jared. Despite his tough situation, he’s a compassionate kid who stands up for the resident nerd, known as Crashpad, risking the wrath of the cool kids, and who helps out his neighbours, a kindly elderly woman with leukemia and her Czech husband.

Jared is stoned so often that when the Trickster—and some other, less benign creatures—show up in his own life, it takes him some time to figure out whether they are real or the result of some bad hallucinogenic mixed in with his pot. This is magic realism that works for readers who aren’t necessarily fans of magic realism, partly because the whole thing could—at least initially—be explained away by the effects of drugs, and partly because the novel is premised on several characters’ skepticism of the supernatural. Eventually Jared does accept magic as being real, but it means some upheaval in how he thinks of himself and his family.

With the portrayal of these characters, and the novel’s setting in northern B.C., a place where jobs, hope, and money have become thin on the ground, Robinson demonstrates a profound understanding that we are all products of our time and place, especially characters who have been so deeply, and enduringly, affected by capitalism and by colonialism and its aftermath. The reason Son of a Trickster works so well is that she also genuinely feels we all also have agency—that a novel in which characters are just passive recipients of history is no novel at all.

Sarah, Jared’s girlfriend, might write exactly that kind of novel. She’s the granddaughter of Jared’s elderly neighbours, the Jakses, living with them temporarily to help care for them. Sarah is prickly and political and stops just short of being a walking, talking slogan. As an adult character she would be annoying and two-dimensional, but teenagers can get away with that amount of obstreperous political rebellion and still be likeable. She’s a funny (but far from ridiculous) feminist killjoy: “She’s unthinkingly accepted her oppression and it’s fucked her up,” she says about her mother at one point. She spends most of her sober time fretting about injustice, and then hops over to Jared’s for sex, finding time to give Jared a couple of political lectures while she’s there.

Jared, too, is believable: decent but flawed, persistent despite being constantly undermined by the precarity of his life. This could easily have wound up as a feel-good tale of redemption, but Jared doesn’t overcome anything, doesn’t reach a higher level, doesn’t beat the odds. He simply survives being a teenager, doing all the ridiculous, crazy, dangerous, oddly mature things that being 16 entails—and that is what makes his tale so warm, appealing, and universal. Heartbreaking, too: There is no easy solution to the existential and social crises of our time, and this novel isn’t going to patronize us by pretending there is.

As the magic becomes more prominent, and as what has hitherto passed for normal starts to fall apart, other creatures appear to Jared: a swarm of fireflies hovering around Sarah, ape men that show up randomly in the house, and even some that pretend to be Jared’s dead dog or Sarah, to lure Jared into the woods, before they turn into otter-people hybrids and viciously attack him. It’s pretty clear to Jared that the supernatural is not just imaginary when he loses a very real toe as a result of this attack. The magic is bound up with Jared learning about what it means to be “part ’Namgis, part Heiltsuk,” to be part of his family in this time and in this place—to understand that his heritage, whether he chooses to believe in it or not, incorporates both good and bad spirit beings. The lines between magic and reality become blurred; different characters have different levels of experience and belief, but ultimately magic becomes another level of the novel’s reality, something that is just as much a part of its fabric as Kitimat or the adolescent friendships and fallings out.

Despite its dark subject matter, Robinson’s writing is bursting with glee, exuberance, and wit. It was encouraging to see a funny book by a female author being shortlisted (Michelle Winters’ I am a Truck was another) for the Giller Prize. Son of a Trickster is often wild and over the top, like being in a dodgem car with someone who won’t take their foot off the gas for a single second, but it all holds together. This trilogy could shape up to be the new Canadian canon in the making.

J.C. Sutcliffe is a writer and translator. Her translations of Document 1 and Mama’s Boy will be published by BookThug in 2018. 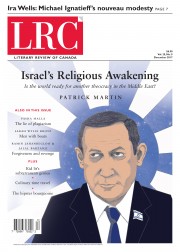