Does the world, wonders the jaded book reviewer, need another epic love story unfolding against the backdrop of the Second World War—a novel one might dismiss, in the clichés of blurb parlance, as “a portrait of a marriage” set amid “the devastation of twentieth-century Europe” in a “paean to the human spirit” (whatever a “paean” is) by a “writer at the height of her powers”?

In those terms, no: nothing new here. But which books do we need then? Lately it seems that we require fiction to proclaim its novelty and utility, to wade into the muck of whatever current dialectic, to be up-to-date and conscientiously engaged with not just the issues of our time, but their various discursive modes as well. In this formulation even the historical novel should offer some modern resonance in order to anchor it in the present moment. Our authors shouldn’t just make it new, but make it now. Except literary newness is mostly cosmetic. In literature, as in our current television fixations—see the current 1980s nostalgia boom from the pastiche of Stranger Things to the reduxes of Full House, Magnum P.I. and, ugh, Roseanne—people may not crave actual originality, but contemporized iterations of established comforts.

“The culture industry fuses the old and familiar into a new quality,” wrote Theodor Adorno back in 1963. “What parades as progress in the culture industry, as the incessantly new which it offers up, remains the disguise for an eternal sameness; everywhere the changes mask a skeleton which has changed just as little as the profit motive itself since the time it first gained its predominance over culture.” Like TV, a great deal of today’s fiction comprises recognizable stories wrapped in the shiny new packaging of some alleged fad. Are the autofictions of Knausgaard, et al., for example, a reflection of the digital age, or simply the most recent progeny of a literary lineage that traces back sixteen centuries to St. Augustine? 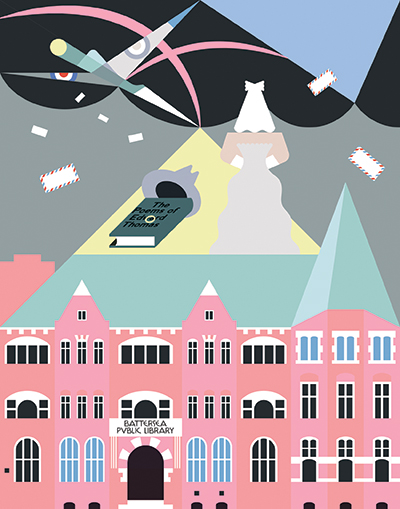 In this formulation, books become life-rafts to keep readers afloat upon the new wave of the latest trend. Literature can offer different things to different people, and there’s great value in work that captures the ethos of a given age. That said, a predominantly time-sensitive literature tends to preclude those novels that don’t simply echo the zeitgeist, but actively resist it. And readers searching for alternatives might have to skip the new releases section of a bookstore in favour of the dusty back shelves and the fiction of another era entirely.

So we come to Kathy Page’s wonderful new novel, Dear Evelyn. This is not a story that seizes shoppers by the wallet with a high-concept hook, or that declares a contentious position within the latest polarizing debate. Its story is more old-fashioned than nostalgic, and not rejigged to appease modern sensibilities; I doubt that there is a blockbuster movie deal in the works. But it is a significant novel because it resists cheap pretensions of revelance, instead focusing on those old standbys of good realist fiction: compelling characters, evocative writing, and a well-told, deeply felt story.

None of this is to say that Kathy Page is oblivious to the fundamental conversations of our time. The author of six previous novels and two collections of fiction, she’s treated themes of gendered violence and toxic masculinity head-on in Frankie Styne and the Silver Man (1992), which features a pulp writer plotting the murder of his female publicist, and the Governor General’s Award finalist Alphabet (2005), which tells the story of a young man incarcerated for murdering his girlfriend. Few things are more disingenuous to the purview of literature than claims that fiction might, or even should, be “about” a particular social issue, and while Page’s books often suggest broader thematic resonances, their focus is specifics—human lives, experiences, and emotions—which she explores acutely and eloquently.

As such, Dear Evelyn is less “about” war and marriage than it is invested in exploring how these themes affect its principal characters, Harry and Evelyn Miles (née Hill). Though the novel interweaves the couple’s stories, it skews toward Harry’s perspective, and opens with his birth: a “male, unremarkable” whom his mother names almost generically, per the advice of her midwife: “ ‘Harry [could be] a king, a ditch-digger or anything in between.’ ” We aren’t introduced to Evelyn until the novel’s third chapter, when she is an adolescent reading Rebecca and suffering the “hungry eyes of a tweedy-looking man” across the library. Under his creepy gaze she considers the novel in her hands, and her future: “There was no hurry to be married. On the other hand, it got you away from home. Perhaps she would stay single, and live on her own in a flat, though it might be lonely and it was hard to imagine.”

That same ambivalence echoes through the courtship, betrothal, and adult lifetime that Evelyn and Harry end up spending together. When her mother asks if she’s in love with Harry, “Evelyn did not know how to answer…On her part, there was no suffering, no feverishness, no lovesickness.” In uncertain times, in which “a house was nothing [and] could be blown up, flattened, burned down,” Harry provides stability, despite his stoicism being a symptom of untreated trauma: “Those years of destruction and death were something he carried without being much aware of them, and he wanted to keep it that way.” So the relationship is functional, yet fraught with an underlying current of tension; Harry self-suppressing, and Evelyn suppressed by the constraints of the gender expectations of the time.

The novel is not proposing some revelatory diagnostic, but only conveying the essence of the Silent Generation; what Page has to say is less impressive than how she says it, which is quite brilliantly. Part of this effect is embedded in the novel’s scaffolding, which is dual, and essentially literary. Real-life love letters from the author’s father to her mother, which “appear sometimes verbatim and at other times edited, recombined and in other ways altered” are threaded throughout the book alongside “entirely fictional letters written in a similar style.” This is revealed in an appendix of acknowledgments, which, after thanking the author’s parents and sisters, also cites the assistance of “some poets, as well as poets in general.” Page, who now lives on Saltspring Island, was born and grew up in England, where she studied English literature at university; Dear Evelyn includes a bibliography that reads like a primer of Great British Poetry (Coleridge, Wordsworth, Yeats, etc.), and Harry, especially, tends to rely on poetry to explain and express his own life to himself and others. Certainly he never really speaks of the horrors he witnessed in North Africa, relying on the war poets Wilfred Owen and Edward Thomas to convey that trauma for him. (“If you could hear, at every jolt, the blood/ Come gargling from the froth-corrupted lungs,” etc.)

Thomas first turns up in Dear Evelyn’s second chapter, when, forced to read his work aloud to the class, a young Harry discovers that although “it was a poem in which nothing happened…the words remade the room.” Encouraged, his teacher, a war amputee named Whitehorse ruthlessly mocked by Harry’s classmates, builds a tenuous bond with the boy around Thomas’s work. As Page reconstructs and fictionalizes her parents’ relationship via their correspondence, the novel’s twin epistolary-poetic architecture suggests that Harry and Evelyn are the ontological products of literatures personal and public; it is in writing—not speech, not action—where truth finds its most articulate expression.

The novel is also episodic; a lot is left out. A fully formed daughter might turn up mid-chapter, forcing one has to deduce that, at some point previously, Evelyn gave birth to her. This conscientious side-stepping of narrative marks serves the novel well, helping avoid the convention and tropes of the genre, such as it is, while also suggesting a kind of privacy: despite the intimacy the novel affords the reader, there are details about these lives to which we haven’t earned access. The effect is tantalizing, like stolen glimpses of something forbidden and elicit between briefly parted curtains, forcing the reader to fill in the details—echoing, perhaps, how Kathy Page herself has stitched this novel together from extrapolations and invention.

Further, Dear Evelyn seems less invested in consecrating the connection of lifelong soulmates as it is in exposing various fissures and gaps: of the self, of family relationships, of perception and understanding. This theme becomes even more poignant toward the novel’s end, when Harry slips into dementia, preoccupied by “the persistent feeling that something was missing.” A personal aside: no work of fiction has ever moved me to tears. These pages so emotionally swept me away that, at one particularly heartbreaking point, the book felt so alive that it might wound me, and I launched the thing across the room. Dear Evelyn trembles with what Walter Benjamin might call an “aura” of authenticity, deeply felt and rooted in the author’s obvious love for literature and her family. The result is a profoundly moving novel that captures the deep melancholy and fundamental loneliness of the human condition with startling emotional acuity.

It’s refreshing to come across a recently published book that situates itself historically, that honours its debt to past writers, and that nurtures a reader who might value these things too. Writers who approach their work beyond its immediate cultural context seem increasingly rare, and so many contemporary novels tend to read like treatments for unmemorable Netflix series, with language deployed grudgingly, as a bored general might nudge his troops into the final battle of an already-lost war. As such, there is something charmingly antiquated about Dear Evelyn—an exquisitely, unabashedly literary novel that unapologetically traffics in the anachronisms of marriage, poetry, and the Second World War; a novel without any explicit reference to “how we live now.” Except that how we live now is more or less how we’ve always lived: often painfully, with moments of grace and joy. What a pleasure to read a book that captures that—humbly, honestly, and beautifully, in all of its complexity.

Pasha Malla is the author of six books, most recently Fugue States, a novel. He lives in Hamilton, Ontario.