Structures of Indifference: An Indigenous Life and Death in a Canadian City

The city I once knew doesn’t exist ­anymore. My mom was twenty-­one years old when she packed our clothes into her beat-up car and we headed to the big city: Winnipeg, or, as it’s known in the Cree language, Win‑nipi in Nehiyawewin. She woke me up when we hit the outskirts late at night. Winnipeg arrived into my consciousness in the form of highway lights on the outskirts of town — orange orbs of light racing past a deep blue car window. I was four.

I hardly knew my mom at the time, and perhaps I still don’t. She found herself pregnant with me at seventeen. She was just a kid. My biological father had other plans, so what choices did she have? She chose adoption for me but was swiftly talked out of it by my grandmother and great-­grandfather. They stepped up to help raise me, since they didn’t want me adopted out. My mom was told to work and to bring home the bacon.

We had come from 190 kilometres away — ­leaving behind a world that remains the stuff of dreams. 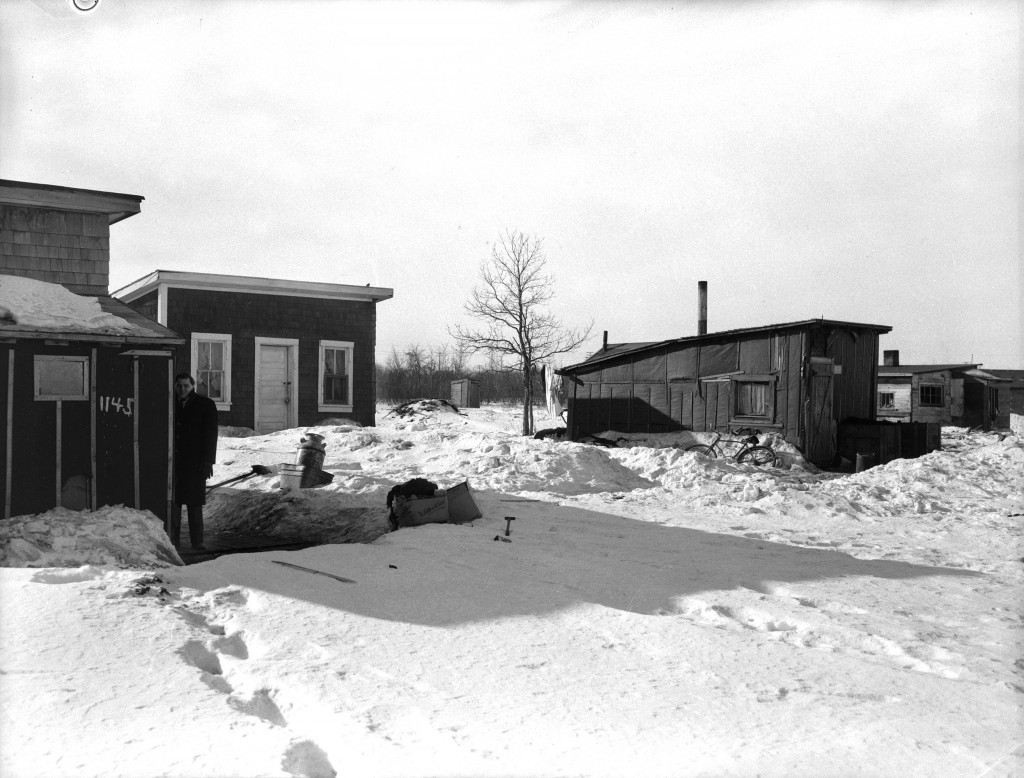 Winnipeg remains full of communities — beyond the grasp of the mainstream — that refuse to die.
Image by Winnipeg Free Press (March 4, 1959) / University of Manitoba Press

My great-­grandpa would sometimes take me into the woods to look for medicine. I remember the shimmering beauty of yellow pond lilies as we meandered through Monet-­like marshy areas. My mushoom snared rabbits and muskrat and beaver. They often sat in a roaster on his stove. He cleaned fish while I sat under his worktable and played with iridescent fish scales. We had no running water so we drank cold water from a dipper tied to a big ­barrel of water.

We arrived in Winnipeg in search of what pretty much everyone who has ever come here has looked for: work, a home, and a community to call our own. It was the late 1970s, and the other newcomers were Polish, Ukrainian, Jewish, and Italian. Some owned the corner stores, meat markets, shoe stores, and bakeries that lined Selkirk Avenue in the city’s North End. That street was the heart of the community, and we all converged there to do our trading on cheque days.

There weren’t many signs that Indigenous people were an important part of Winnipeg back then. Like most profound change, “Indigenization” comes slowly. There aren’t that many signs now, either. But back then, we just weren’t as visible as we are now. Maybe it’s because there are many more of us here today.

It wasn’t until young adulthood that I found my spirit name and my clan, and I learned the ways of the Sun Dance. There were no Indigenous murals, no Indigenous sculptures, no acknowledgements that this land is Treaty One territory: the home of the Cree and Anishinaabe people and birthplace of the Métis nation.

Most of the shopkeepers moved away as they became more affluent. But the neighbourhood I grew up in would have been recognizable to people in Rooster Town, on the southwest outskirts of Winnipeg, where Métis lived from 1901 to 1961. There were many such areas around Winnipeg, where people lived largely beyond the grasp of the city. A 1959 report identified at least twenty-­six other communities in Manitoba — places like Melonville and Mudflats — that grew without municipal services as Métis arrived from rural areas.

The history of a forgotten (and, during its lifetime, maligned) community is chronicled in Rooster Town, a scholarly book, packed with historical records carefully presented, that reads more like a labour of love. Peeking through the statistics, land plans, tax records, and other dry sources is a glimpse of what it was like to be Métis in Winnipeg after the Red River Rebellion. Importantly, Rooster Town shows a community that refused to die.

This is a book that seeks to change the false colonial history we’ve all been raised to believe. It acknowledges the roles Indigenous people played in the development of Winnipeg — in all of Canada. Dozens of Rooster Town residents are mentioned, and there are pictures of the houses they built and the family gatherings they attended. But because it is an academic work, not a sweeping drama, the characters are not as vivid as they could be. The record of the families that lived, worked, and raised families in Rooster Town does much, however, to dispel the traditional negative stereotypes imposed on Métis people. In fact, it paints a picture of the quiet resistance they used in order to keep their way of life alive.

Rooster Town dispels the archetype — often promoted by local print media outlets — that an Indigenous person cannot survive in the urban landscape. The community’s people did all right for themselves, even in the midst of the Great Depression. They built modest houses, cultivated gardens, and stayed employed whenever they could.

The economic hard times of the 1930s also helped delay the inevitable: Rooster Town would soon face the forced relocation that First Nations cousins had confronted with the settling of the prairies. As Winnipeg expanded and the land the Métis lived on became more valuable, it was just a matter of time before residents were pushed out. Starting in the late 1950s, the city used a combination of grants and threats of eviction to clear out Rooster Town, and in 1961 the last remaining household was relocated to Winnipeg’s North End.

A lack of vivid characters is not an issue with Structures of Indifference, which chronicles the sad final hours of an Indigenous man in a Winnipeg emergency room.

Brian Sinclair was forty-­five in 2008, when staff at a community health group sent him to the Health Sciences Centre to have a catheter changed. It should have been a routine visit, but he was found dead in his wheelchair thirty-­four hours later. He died of a treatable infection. At the inquest into his death, ER staff said they assumed he was drunk or was homeless.

Canadians know their health care system isn’t perfect, but Sinclair’s fate underlines another ­reality: racism in Canadian health care. Structures of Indifference presents a memorable picture of an easy-­going, middle-­aged man who grew up with very little and had been dealing with several disabilities. It is a painful read at times, because it shows how Sinclair was treated like a second-­class citizen that fateful night — and for most of his life.

We can’t resurrect Brian Sinclair, but we can certainly work to make sure that unnecessary deaths like his don’t occur again. And I am hopeful that this is happening. One night, after reading this book, I ended up in the very emergency room in which Sinclair died. Much has changed — from the floor plan to the flooring and paint — and the attention I received was in fact very good. Better care in Winnipeg emergency rooms today is part of Sinclair’s legacy, and it is something we should all be thankful for.

Taken together, Rooster Town and Structures of Indifference offer a glimpse of a city that once luxuriated in its racist attitudes but that has, more recently, worked hard to deal with them. The Winnipeg I knew as a child — perhaps even the Winnipeg that Maclean’s infamously called “the most racist city in Canada” in 2016 — no longer exists. We even have a Métis man as our mayor.

But Indigenous people know that racism persists here, just as it does in Thunder Bay, Toronto, and other cities. The attitude is foundational. Whether intended or not, explicit or not, passive or not, it keeps everything rolling along. It allows Indigenous people to be seen never as equals — in health care, education, and justice —  but rather as a drain on society. That’s why our “rights” are pointless, unless we put those good thoughts into action.

It’s not enough to say we are sovereign people. Having rights means allowing us to have control of our own land, even when it doesn’t suit your agenda. Acknowledgement is fine, but it’s like that catchphrase that’s on everyone’s tongue: “reconciliation.” We can use such words, but if there’s no action to right the wrongs behind it, reconciliation means nothing.

I stay in Winnipeg because it has been my ancestors’ home for thousands of years. It’s still mine despite everything. The North End — where I live — remains a neighbourhood where the dispossessed, the hopeful, the oppressed, and hustlers gather to live, love, and go about their lives in relative peace. Some people move on, but others stay for life. The neighbourhood is battle scarred but thriving.

Another generation of newcomers is making this place home. I welcome them. My next-door neighbours are from Myanmar, and we’ve watched our kids grow up together. People are coming from Eritrea, Syria, and other faraway places.

Maybe I’ll even move back up north one day, but for now I’m content here.

I wonder if I’ll always be able to see the goodness in Winnipeg. What makes my day lately is mornings in the ’hood: the rumpled kids who rustle off to school in the mornings pass by me with quick glances and the occasional smile. Sometimes they don’t even acknowledge my presence. Some of them carry a lightness within them that can take your breath away. They are shiny and bright, like medicine beckoning far off in the woods. These are the kids who will take over the world someday. Their world seems different from the one I grew up in. To witness that majesty of change is something I wouldn’t give up for anything.

Once, when I was younger, I was at a cocktail party where people were discussing racial issues in what they thought was a humorous way. As they talked and laughed, I smiled gently and sipped my drink and waited for that perfect moment to say, “You know, I’m Aboriginal.” The laughter ended abruptly — like a kettle taken off a hot stove. Some eyes widened. Some looked away. A few cast sympathetic gazes my way. The jokers’ conspiratorial smirks turned into gaping mouths. Cheeks turned pink, half-­hearted apologies were given, and some people dipped out from the circle. One guy babbled. I think he even had a sliver of admiration for me. Because, you know, I don’t even “act” or “look like an Indian.”

My daughter will never know the Winnipeg I know. Despite two card-carrying registered Indian parents, she doesn’t have the traditional Indigenous look that makes us easy to pick out in a crowd. With fairer skin than either of us, freckles, and red hair, my daughter has the privilege of white skin. She will never have to deal with some of the things I — or her darker-­skinned brother — experienced growing up here. Her hazel eyes will never burn with the shame of being poor and Indian. She will never be called a wagon-­burner, a Navajo, or worse. But we gave her an Indigenous name to make sure she never forgets who she is — and where she comes from.