Métis Politics and Governance in Canada

With this publication, the study of Métis governance is finally being elevated out of the eighteenth and nineteenth centuries and moved into the twenty-first. The authors, Kelly Saunders and Janique Dubois, provide an account that is sorely needed. Building upon Murray Dobbin’s The One-and-a-Half Men, from 1981, and John Weinstein’s Quiet Revolution West, from 2007, they continue in the tradition of important books about Métis politics by non-Métis. (Neither Saunders nor Dubois is Métis — and, to be clear, many fantastic Métis scholars are working on related issues.) Drawing on years of engagement with Métis provincial governments, Saunders and Dubois tap into the contemporary vibrancy that they’ve seen at local, regional, provincial, and federal levels to show how Métis political action has never stopped. Indeed, they demonstrate that a commitment to nationhood through political organization is at the core of being Métis.

This book is also unlike many of those written about Métis by non-Métis scholars. While Saunders and Dubois look to historical scholarship by outsiders, they do their best to draw from the growing field of Métis studies while seeking to privilege Métis voices. I read this book from the heart of our homeland, and it is clear that they are not just thinking about Métis. They are thinking with us.

Increasingly, settler Canadians need to thoughtfully engage with Métis governance, especially within the context of reconciliation. Like First Nations, the Métis Nation is a nation, and we are finally experiencing how Canada will choose to engage with us as another Indigenous nation with political rights. Saunders and Dubois don’t let discourses of reconciliation take over the conversation entirely, however. Instead of merely positioning Métis as another rights-bearing group that must be accommodated through section 35 of the Constitution, they demonstrate that Métis political action exceeds such boundaries. By providing a concise and well-researched account of governance structures, Saunders and Dubois demonstrate that Métis political action is as dynamic at the community level as it is at the national level; that our leaders answer to local and regional concerns; and that they are ultimately responsible to our ­communities.

This book foregrounds the consistent efforts made by Métis to build and rebuild our nation, despite the interference of external polities like Canada — through our political assertiveness at the Battle of Seven Oaks, the negotiation of the Manitoba Act, recent court cases, and numerous other actions. Since its emergence, the Métis Nation has continually sought to establish a nation-to-nation relationship with Canada, and Saunders and Dubois chronicle efforts to engage an often-negligent treaty partner in Ottawa. 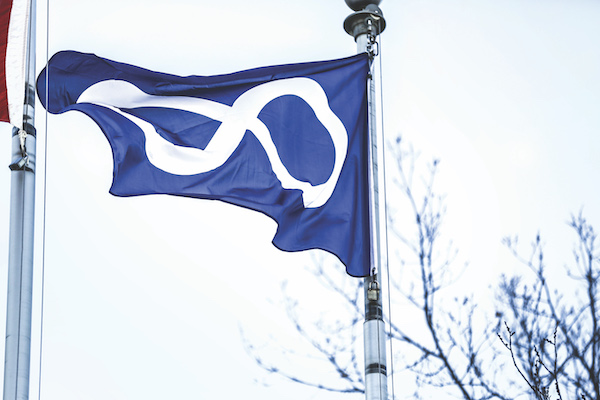 Image by the University of Manitoba

The authors make it clear that Métis politics and governance are not — and should never be — too difficult for the broader public to understand. For that, I thank them. Canadians who still cannot wrap their heads around who the Métis are, especially those Canadians in the public service, need to read this book. People who still accept tired racialized understandings of Métis — simplified ones of mixed Indigenous and non-Indigenous ancestry — need to read this book. And anyone wanting to know how they might prompt their own governments to fairly engage with Métis at local, regional, provincial, and federal levels should read this book. Manitoba’s premier, Brian Pallister, should read this book.

That the Métis have never stopped acting politically is a vital point to make, especially in a climate where Indigenous resurgence abounds: Métis governments, as Saunders and Dubois empirically show, are evolving within this context. Our concerns are now less with recovering from colonialism and more with the continued building and strengthening of our nation. The Manitoba Metis Federation is creating opportunities for citizens, as exemplified in its pharmacy care program for seniors and its recently announced seniors’ housing project in St. Laurent. The MMF supports first-time homebuyers looking to buy in our homeland. It has also established an emergency housing fund for citizens facing unforeseen hardship and has secured $45 million in post-secondary funding for students. These are just some of its recent accomplishments. And, given the results of the recent federal election campaign, in which the MMF publicly endorsed the Liberals, such programs are likely to continue.

Building a nation is a long process, especially in the wake of colonialism. But if the last couple of decades is any indication, it’s safe to assert that our nation is becoming strong again.

That the Métis have never stopped acting politically is a vital point to make, especially in a climate where Indigenous resurgence abounds.

Although we have many great leaders, Métis women have often been the backbone of our nation. Saunders and Dubois show this in “Mothers of the Métis Nation,” a vital chapter, where they discuss the importance and centrality of women in Métis political action. Many ministers involved in the Métis Nation are women, and three of the five provincial governments have women as presidents: Audrey Poitras (Métis Nation of Alberta), Margaret Froh (Métis Nation of Ontario), and Clara Morin Dal Col (Métis Nation British Columbia). In addition, many of the movers and shakers at a local level are women. Without the strength and labour of Métis women, the Métis Nation would cease to exist. Having their labour represented here is long overdue.

This book follows legal victories in the Powley, Manitoba Metis Federation, and Daniels cases, and it shows how these victories (and the political momentum that they have produced) will continue to compound and further the political goals of the nation. In fact, Métis politics is as dynamic today as it has ever been — so dynamic that a book like this is almost dated before it’s even out. That is no fault of the authors. Rather, with the recent accords signed with each provincial government, coupled with issues regarding Métis membership, political disagreements persist.

During its most recent annual general assembly, the MMF passed Resolution 6, which would give it the power to leave the Métis National Council. This move was in response to the Métis Nation of Ontario’s non-commitment to properly comply with the Métis Nation’s citizenship criteria. As MMF leaders and members expressed, any provincial non-compliance with national citizenship criteria is an affront to our sovereignty and internal cohesion as a nation. The resolution is but one of many contemporary examples of political action to buttress against the further colonization of our political institutions.

Throughout the book, Saunders and Dubois return to the idea that we are “Riel’s people” — a thread that has been woven through much of the scholarship about Métis. But it’s time that we moved beyond Riel’s canonization. Put another way: Why don’t we call ourselves Grant’s people? Brady’s people? Adam’s people? Campbell’s people? Chartrand’s people? Researchers and general readers alike need to think beyond individual leaders when it comes to our politics. After all, as Saunders and Dubois remind us multiple times, Métis political action derives from collective action. We are the Métis Nation’s people — not people of some historical figure. We can also do a better job of discussing governance in ways that take stock of the geographies that have shaped and cradled our society over the last two centuries.

With its canonization of leaders, this book locates contemporary Métis politics in late nineteenth-­century political developments, without robustly dealing with the time in the middle: the nation went through considerable societal and political change throughout the twentieth century, and Saunders and Dubois don’t really account for this beyond the honourable mentions of Jim Brady and Malcolm Norris. Jurisdiction over Métis citizens, for example, shifted from the federal level to the provincial. So accounting for twentieth-century Métis histories poses a challenge: any researcher must contend not with one political opponent (in the form of Canada) but with several (in the form of Manitoba, Saskatchewan, and Alberta). Beyond discussions of the Métis Settlements in Alberta, the early and mid-twentieth century fails to make the cut in virtually all scholarship on Métis. Saunders and Dubois’s light treatment of the twentieth century is thus more a symptom of previous scholarly inquiry. How can one write a political history of an era when the history itself has yet to be adequately written?

Thus, Saunders and Dubois’s omission also signals to me, a Métis scholar, that we need to further investigate histories of Métis society in order to provide denser accounts of our governance and politics — accounts that resist the urge of time-machining nineteenth-century ideals into twenty-first-century contexts.

David Parent is a doctoral candidate in the Faculty of Native Studies and the Department of Sociology at the University of Alberta.