The Time Has Come: Why Men Must Join the Gender Equality Revolution

International Women’s Day, which we ­celebrate this month, has grown exhausting to watch unfold on social media. Corporations love displaying coordinated woke-ness but often just go through the motions of reflexively copying and pasting a trending hashtag, as if someone knocked them on the knee with a hammer. Take March 8, 2017, as an example. The theme of #IWD (as it’s now affectionately called) was “Women in the Changing World of Work: Planet 50‑50 by 2030.” In his official message, United Nations Secretary-General António Guterres prodded at the glass ceiling, reminding the world that “leadership positions across the board are still held by men,” and rightly blamed “outdated attitudes and entrenched male chauvinism.”

Public figures and brands of all kinds quickly scrambled to align themselves as right-minded and progressive. Social media channels churned endlessly — Twitter actually assigns cute hashtag icons to social justice holidays — and before I’d even finished my second coffee, my screen looked like a little lady-meme factory. Feminist catchphrases were splashed across the faces of everyone from Rosie the Riveter to Ruth Bader Ginsburg, because that’s all it takes to join the party.

But even buried in a pile of bot-compiled performative gestures and RBG wisdom, the words “sperm” and “shit” tend to leap out. 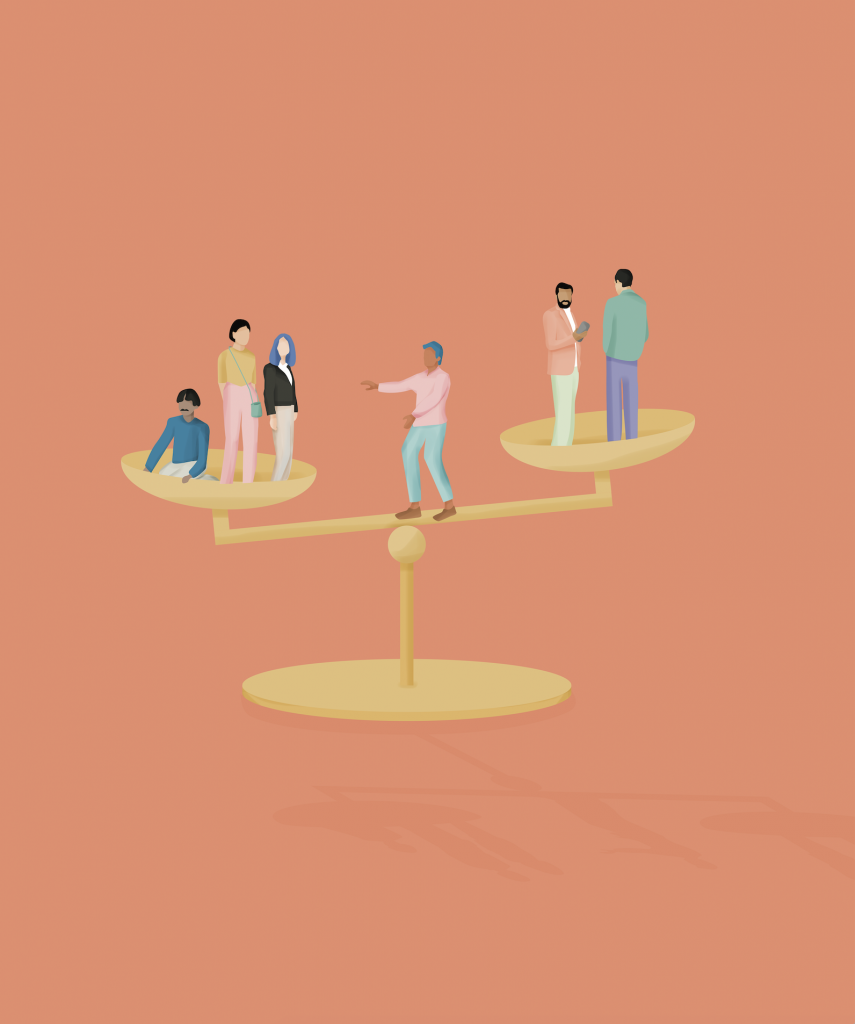 Tilting the scales toward gender equality represents an opportunity for men, as much as it does for women.
Image by Valéry Lemay

It was mid-morning when John Ruffolo, at the time the CEO of OMERS Ventures, joined the #IWD conversation by quoting William Golding, author of Lord of the Flies : “I think women are foolish to pretend they are equal to men. They are far superior and always have been.” See what he did there? The tweet-quote continued:

OMERS Ventures is the arm of the Ontario Municipal Employees Retirement System that provides start-up cash to brands like Shopify and Hootsuite, so there’s a lot of pressure to get things right. But just as unsupervised boys shouldn’t govern themselves on tiny islands, sometimes they shouldn’t quote each other either: the words attributed to Golding are actually from a book by Erick S. Gray, the New York author of Around the Way Girls 5 and Booty Call *69. (To be fair, a lot of women really like Gray on Goodreads. You do you, ladies.)

I’ve worked in corporate communications my entire career, and I’ve met my fair share of CEOs. Most of them are men, and a lot of them are great people. As I’ve gotten to know them, I’ve noticed many need help developing their online personas. Still, I was astounded to see a man of such influence perpetuating, as Guterres put it, “outdated attitudes.”

Ruffolo’s #IWD tweet — whether well-intended or not — is an example of what Michael Kaufman describes in his new book as the “drip, drip, drip of a tap that keeps you awake at night. It’s the background hum in too many workplaces, and for so many women, it’s the thing that you know awaits you each and every day.” Hashtag that.

Michael Kaufman’s The Time Has Come is about feminism. This is not new territory for the writer — a former York University professor, a member of the G7 Gender Equality Advisory Council, and co-author, with Michael Kimmel, of The Guy’s Guide to Feminism (2011) — but it does strike a new tone for a new time. It’s a book by a man, largely for a male reader.

Kaufman, perhaps best known as the co-founder of the White Ribbon campaign, opens his call to arms by observing, “The public world of gender relations is exploding all around us.” With predictable proof points (the 2017 Women’s March, #MeToo, #TimesUp), he warns the “revolution is coming on fast and coming on strong.” It generally doesn’t matter who is yelling “Fire!” Pulling the alarm on gender issues can elicit strong male reactions, ranging from cautious confusion to downright aggression. As he has since the early 1990s, though, Kaufman tries his best to bring the decent man onside.

In reviewing external forces that continue to drive inequality, The Time Has Come outlines key patriarchal systems — workplace discrimination, traditional gender roles in the home, the persistent gender-based violence that led the world to wear white ribbons in the first place — and draws meaningful connections between them. Kaufman’s style is accessible and conversational. He simplifies without trivializing. He exerts moral pressure, but with compassion and even forgiveness. This is what makes the book powerful — powerful enough to change a heart as well as a mind. He talks to readers like a friend or a father, and that serves to soften his insistence that men accept their privilege and power. I’m grateful for that. Because it’s a tough tone for women to take.

The Time Has Come builds its argument across three sections: spheres of work, domestic life, and gender-based violence. Research and anecdotes, many drawn from Kaufman’s work with the Brazilian-based NGO Promundo, give shape to inequalities many of us take for granted and highlight the obstacles we face on a daily basis. Most of us know that women contribute more labour at home, for example, but Kaufman still describes one mom’s exit from the workforce: “I watched dreams get put out with the garbage,” she says. Hers is one of many perspectives that personalize this gendered story — all different in degree but all drips from the same tap.

Kaufman anticipates many a man’s questioning: What will I gain? Why should I care if things change? In many ways, “What’s in it for me?” underpins his central thesis. He argues that workplaces free of gender-based harassment are less stressful and more productive. He argues more-involved fatherhood will make a man a happier person. And he argues that if women were allowed to redefine expressions of power writ large, even men would experience “a vision of liberation outside of the narrow constraints created by eight thousand years of life in patriarchal societies.”

Kaufman asks us to “imagine our world but with gender equality” — not just because it’s right, but because it will create universal “human liberation.” Put another way, gender equality is an attractive item for everyone if men reframe it as equal opportunity plain and simple.

That’s a great long-term goal, yes, but too many women are still working on that leaky faucet.

For men who have bought into the “why” of feminism, The Time Has Come tries to explain the “how.” It’s here that Kaufman is somewhat inconsistent. In “The Dad Shift,” for example, he focuses on ballot-box initiatives, but he could have spent more time on how men might foster positive workaday attitudes outside of elections. He describes conversations he’s had with men around the world but is less concerned with conversations men and couples should be having about fatherhood in their own homes.

In “The New 9 to 5,” Kaufman offers some solutions — each bound up in personal accountability and fostering good workplace culture. In order to achieve gender equality, he maintains, “we need to combine personal change with changes in laws, social policy, and . . . structures and institutions.” Engaging with actionable strategies, from personal to social to structural, would be powerful indeed if he had just included more of them.

Nonetheless, The Time Has Come does matter to a reader like me. Throughout, Kaufman attempts the important work of arming would-be allies of gender equality with an arsenal of conversation. Real change requires more than Twitter-based mansplaining. Real change requires hard work — and a lot of talk between men on a casual, everyday basis. A man who reads this book will be able to make some compelling arguments. And, I’ll admit, it equips women to make the same old argument in not the same old way. By proactively identifying and responding to common insecurities, Kaufman helps prepare all of us to talk to equality’s harshest critics.

Kaufman’s most persuasive arguments, and those most relevant to this moment, come at the end of The Time Has Come. Men themselves take centre stage as he digs into some serious pain points: homophobia, toxic masculinity, and other dominant aspects of manhood that Rachel Giese’s Boys: What It Means to Become a Man, Jamil Jivani’s Why Young Men: Rage, Race and the Crisis of Identity, and other recent titles also explore. There is a great sense of loss in passages about emotional repression, a lack of deep relationships, and the constant struggle to maintain a facade of masculinity and power: “What keeps so many boys and men pursuing toxic forms of manhood that harm not only others but themselves? Why is it so hard for many men to stand up to other men when faced with sexism or ­homophobia?”

Ultimately, Kaufman speaks to a “fear of other men” that is baked into dominant ideas of ­manhood:

I believe that many of the institutions created by men, from bars to bleachers, parliaments to clubs, locker rooms to boardrooms, have a function of providing a space where men can feel safe together because we’ve worked out a set of explicit and implicit rules governing how we act with each other. One way many men have learned to act is to use sexism, homophobia, and in some cases racism (sometimes in the form of collective physical violence, sometimes in the form of jokes and insults) to bond together and negotiate our relations with each other.

By the end of The Time Has Come, I wasn’t thinking about irritable hashtags or things Bay Street hotshots have said to me. Instead, I was preoccupied with reflection: On the viral video of “Proud Boys” beating a man on a Manhattan street. On the arrest of teens at St. Michael’s College School, in Toronto. Man, heal thyself.