Plastic Capitalism: Contemporary Art and the Drive to Waste

We are on the brink of ecological catastrophe, yet rates of conspicuous consumption are unprecedented, in part because we remain wedded to an economic system that depends on consumerism. Out of this contradiction, a new market has arisen: the sustainability market. Eco-­driving, travel mugs, organic food and textiles, and the locavore movement, to name a few trends, are there to make our habits both ethical and fun. And there’s upcycling, which sounds great and gives us moral credit, just like riding a bicycle (except for the aluminum extraction required). The combined effect is the commodification of morality — washed with a green veneer.

Greenwashing helps to mask an emerging placebo discourse around sustainability and waste. As much as there might be all sorts of good reasons to use a travel mug instead of a disposable cup, we’re still purchasing our beverages “to go” and supporting companies that commit far greater environmental degradation than our individual purchases could ever counteract. Moreover, there’s the problem of so-­called rebound effects, those unintended negative consequences that arise through the increased use of supposedly more efficient, environment-­friendly products. True, cars get more kilometres to the litre than they used to, but we’re driving more of them. The total effect is worse. Increasingly, it seems there is no ethical consumption under capitalism after all, but is that reason enough to throw the travel mug out with the bathwater? 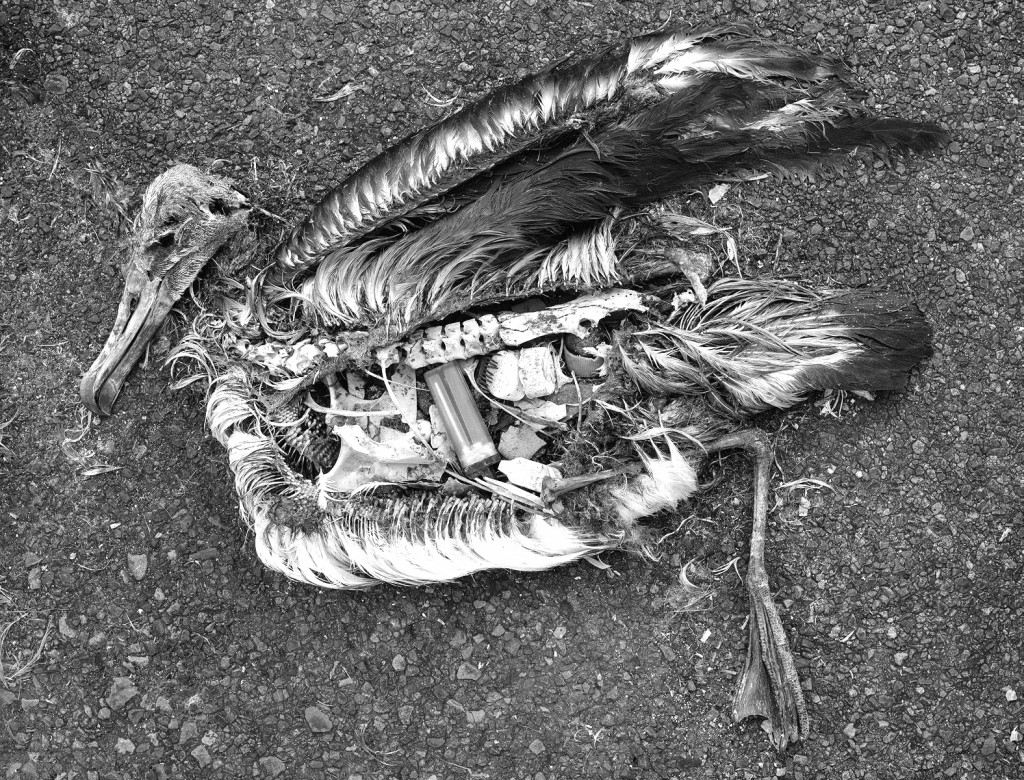 Art, like nature, has become a repository for our plastic waste.
Image by Midway: Message from the Gyre (Albatross) by Chris Jordan (2011) / MIT Press

It is with an eye on this conundrum that Amanda Boetzkes, a professor at the University of Guelph, in Ontario, has approached contemporary visual art. Her previous book, The Ethics of Earth Art, from 2010, explored aesthetics, ecology, and the representation of waste. With Plastic Capitalism, she offers a broad and subtle discussion of sustainability, art, and plastic waste in a world governed by neoliberal capitalism. Her title’s pun — alluding to the plastic (or visual) arts as well as to petroleum-­based polymers — prompts us to grapple with an uncomfortable connection we might otherwise ignore. Considered through her lens, both waste and art inhabit and incorporate the shadow landscapes we have created in the Anthropocene — quite the opposite of a greenwashed view of the world.

Greenwashing and clever marketing have co-­opted contemporary eco-­criticism “in order to maintain an economy founded on the depletion of resources,” as Boetzkes puts it early in Plastic Capitalism. This has produced a powerful yet deceptive discourse of sustainability — a placebo narrative that obscures our march through waste, excess, and expenditure toward destruction. Drawing on the so-­called (and heterogeneous) new materialism of Jane Bennett, Timothy Morton, and other eco-­critics, Boetzkes pushes us to re-­evaluate our attitudes toward objects, the environment, and, implicitly, ourselves.

Through detailed, sensitive readings of a wide-­ranging selection of modern and contemporary works — from Joseph Beuys, Alberto Burri, and Arman to Thomas Hirschhorn, Agnès Varda, and Mel Chin — she illustrates an enduring strand of eco-­critical art that, like investigative journalism, reveals our crimes as a consumer society. The newer works, in particular, expose the psychological deficiencies of placebo messaging, which can ingrain the very behaviours new materialism challenges. In doing so, she opens a window into art’s capacities and its limitations. By considering how individual pieces comment on our ­consumerist condition, for example, she challenges the notion of art as a redemptive or compensatory force. Art has often been the privileged place of insight — a site of imagination and experiment, a funhouse mirror of our own world. But is it also a place for change?

Boetzkes does not present a particular prescription, but she does offer an uncompromising perspective through which to recognize and visualize our greenwashed condition. We see how a multi-­channel video installation like Tejal Shah’s Landfill Dance (2012) disturbs and provokes, how it plays up the intimacy between human beings and waste. Shah’s shadow landscape serves as backdrop and archaeological dig for a group of women performing a dance that is at times exploratory, at times erotic, and at times ritualistic. The women wear gas masks and are clothed in white tunics covered with insect motifs. The overlaid sounds bear witness to a polluted auditory environment: construction noise, the scurrying of insects (have the textile motifs come to life?), laboured ­breathing. “The atmosphere is suggestive of neither a neoliberal optimism nor paralyzing despair in the face of the landfill,” Boetzkes writes. “Indeed, the movements themselves seem to draw out the potential of the bodies to coexist with this environment, as though shaping the figures with a new kind of exoskeleton forged through the performative acts.”

Landfill Dance speaks to a number of threads in Plastic Capitalism. The impulses that drive us toward destruction, for example, manifest as a semi-erotic interaction with decay. And while the white tunics and gas masks would suggest an anaesthetic approach, the insect motifs — both decoration and defilement — thwart that interpretation by aestheticizing what would normally be an object of disgust or (worse) disregard. Boetzkes shows how aestheticizing is not an act of gilding over rubbish, but rather one that renders that waste part of our sensory world.

Throughout Plastic Capitalism, Boetzkes considers how the insidious ubiquity of plastic presents a specific challenge: it is the thing that persists when we don’t want it, the thing that does not decay, the thing that cannot be thrown out. It is waste that resists wasting away — an ontological contradiction. Moreover, plastic is stubbornly political. In this way, the plastic arts lend visual expression to our specious discourse of sustainability by emphasizing materiality. Since plastic is intimately tied up with the corporate and national interests of the modern state, it plays a special role in the visual representation of waste in a contemporary petro-­capitalist world.

Consider Brian Jungen’s Cetology, which the Vancouver Art Gallery purchased in 2003. A simulated whale skeleton made from the legs of plastic chairs, the large sculptural work “exposes the concurrent procedures of historicizing indigenous people,” Boetzkes explains. It naturalizes “the colonial perspective of animal life as coextensively fossils and fossil fuels.” Playing on literary tropes (think Moby-Dick), Cetology visually connects the hunts that once sustained the whale-­oil industry with the colonial destruction of Indigenous ways of life that today sustains the petroleum economy. As petroleum supplanted whale oil, so too has plastic supplanted bone.

In a manner less grand and stylized than Cetology, Chris Jordan’s photography project Midway: Message from the Gyre also looks to the sea, now with affective intimacy. In the concluding section of her book, Boetzkes includes one of the Midway photographs that has become “an iconic image of the Anthropocene.” The rotting carcass of an albatross fledgling, with the contents of its (­former) belly, has become a repository for our plastic waste. It is this that will remain when the birds and we are gone.

Jordan’s related 2017 film, Albatross, which Boetzkes mentions but does not discuss in detail, opens by quoting The Rime of the Ancient Mariner: “Until my ghastly tale is told, this heart within me burns.” Just last month a whale carcass washed up in the Philippines. Its stomach contained forty kilograms of plastic bags, as pretty much every major news outlet has reported. The ghastly tale is being told.

When we take an archaeological approach to contemporary art — digging out the bones and detritus, sorting it all, presenting what we find — we see how waste structurally constitutes our material and political world. We see how it defines the Anthropocene. But can we use art to redefine that structure? Can we turn our garbage into gold in a sort of apotheosis of the “reduce, reuse, recycle” mantra?

Boetzkes looks to performances by Yves Klein, in the early 1960s, for one possible answer. In what seems like a stunt, the French Nouveau Réaliste sold a “zone of immaterial pictorial sensibility” in exchange for gold leaf, for which he provided a documentation of ownership. The buyer could then meet with the artist to “complete” the work, at which point Klein would throw half of the gold leaf into the Seine and use the other half for another piece. There was no art object, no materiality involved in the exchange — even the documentation of ownership was to be burned. Instead of turning garbage into gold, Klein turned gold into useless matter by removing it from the system of capitalist exchange. In an act of conspicuous profligacy, he “wasted” it in a radical sense: by preserving it from commodification.

Like waste, modern art is excessive. It renders the raw materials of which it is constructed functionally useless. But it is precisely in its wastefulness that modern art is necessary, that it is art, and therein lies its moment of critique. The term “waste art” understood this way might seem redundant, or excessive. But that is precisely the point: its excess is its way of existing; it is how it protests the status quo.

If greenwashing is an attempt to gild our consumption and our guilty consciences, then Plastic Capitalism shows us how we might strip away that veneer and make a spectacle of the waste that constitutes its materiality. Whether through a quasi-­ecstatic celebration of our intimate coexistence with waste, or through photographic autopsy of the bodies that died from ingesting our plastic, the works discussed in this volume expose the undeniable fact that plastic is everywhere. As it becomes even more difficult for us to ignore the material’s presence, the placebo discourse — one can hope — will begin to lose ground.