As a kid, growing up in Odawa and Tkaronto, on lands stewarded for millennia by the Anishinabeg, the Haudenosaunee, and the Huron-Wendat, I went to a lot of powwows. My mixed Anishinabeg-Kanien’kehá:ka family and I would admire the dancers and swoon over their regalia. We’d eat enormous Indian tacos and wash them down with strawberry drink. We’d laugh at the emcee’s corny jokes. We’d move to the powerful wailing songs and feel the booming heartbeat of the drum. Most importantly, we would spend time with family, friends, and community members, re­affirming our shared cultural connection.

Amid these sights and sounds was another powwow fixture: we called her the White Hippie Lady. With her faux-buckskin halter top, long blond hair and beaded headband, and pale skin made red only by the sun, she was a cartoonish misinterpretation of Indigenous cultures. She’d step out to dance her wild hippie dance, eyes closed, arms flailing, awkwardly twirling, unconcerned by the subtle eye rolls and restrained giggles: a psychedelic Elaine Benes in suede.

She was always there, always alone. No one knew who she was, and she made no effort to connect with those who watched. Even as a child, I knew she wasn’t just another fair-skinned Indian like me; she had none of my deference or humility. Instead, she moved with the unearned confidence of someone who feels a sense of entitlement in every space. And though she remained mysterious and aloof, one thing was clear: She wasn’t there to learn or build relationships. She was there to take something. 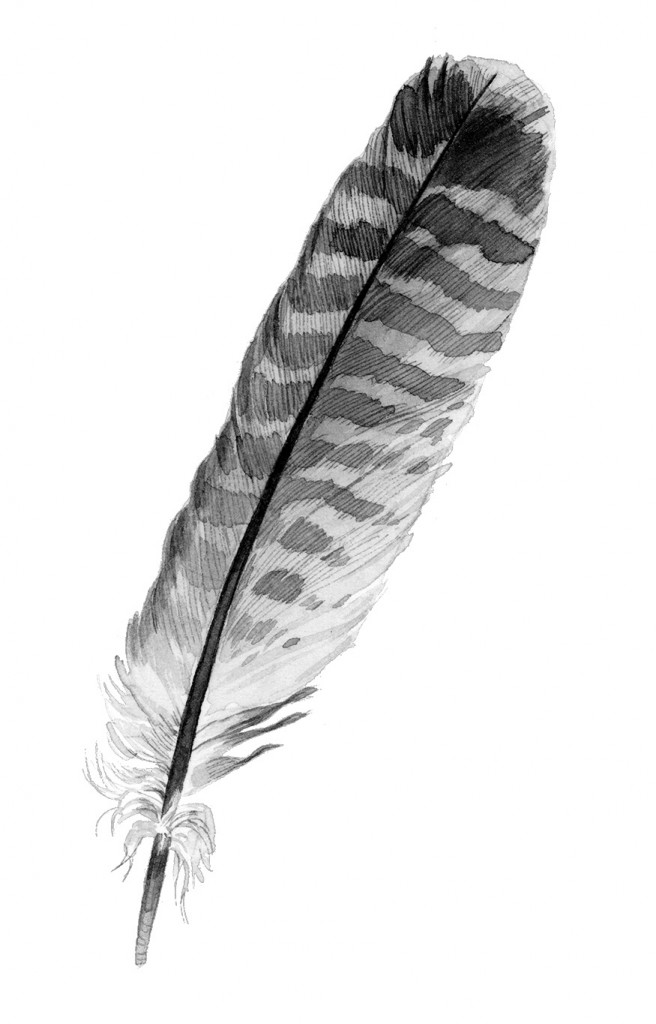 Who gets to claim status?
Image by Melinda Josie

All these years later, I continue to meet versions of the White Hippie Lady. I’d wager that every Indigenous person does. She is just as often a man, perhaps even a woke or gender non-conforming one. She’s not just at powwows but everywhere — in business, in academia, in government. Though she may seem harmless at first glance, I have come to know she is ultimately a self-serving interloper. She embodies the long, insidious history of Europeans and their descendants on Turtle Island who have fundamentally misunderstood Indigenous nations, and who want to take what we have without giving anything in return. She’s a shape-shifter — a chimera. And her numbers are on the rise.

Darryl Leroux, a professor of social justice at Saint Mary’s University in Halifax, speaks to these growing numbers in Distorted Descent: White Claims to Indigenous Identity. Specifically, he looks at French descendants in Eastern Canada who are increasingly self-identifying as Indigenous. These race-shifters, mostly white men, assume a lowercase-m métis identity through a process called self-indigenization. They claim to be métis even as they have no connection to living capital‑M Métis people or governments.

Through a process called lineal descent, race-shifters use “an Indigenous ancestor born between 300 and 375 years ago as the basis for a contemporary ‘Indigenous’ identity.” They might also engage in aspirational descent and use a long-ago predecessor whom they’ve creatively reimagined to “become ‘Indigenous’ without any actual Indigenous ancestry.” In either case, they use their artificial status as a political strategy to oppose genuine Indigenous territorial claims and land negotiations, and to gain access to our constitutionally protected hunting and fishing rights.

As these self-indigenizing individuals grow in numbers, so too does their capacity to organize. In the last twenty years, groups representing self-identified métis people have emerged in the Maritimes, Quebec, and Ontario. Many of them “have either unsuccessfully mounted court cases to obtain legal recognition of their Aboriginal rights or are currently in the process of doing so.” Though they have not yet been able to obtain legal Aboriginal status and the rights that go with it, several have successfully blocked Indigenous communities from accessing resources and economic opportunities. For example, the Communauté métisse du Domaine-du-Roy et de la Seigneurie de Mingan, which began as a white supremacy group advocating for “white rights,” assumed a métis identity, in 2006, to oppose Innu land claims negotiations in the Saguenay–Lac-Saint-Jean and Côte-Nord regions of Quebec.

On the Gaspé Peninsula, the Métis Nation of the Rising Sun mounted an aggressive and racist campaign to block the Gesgapegiag Mi’kmaq from opening a hunting and fishing outfitter,  an initiative that could have helped raise the community out of economic hardship. Now, with upwards of 20,000 members, the MNRS is the largest self-identified métis organization in Quebec and the second largest in Canada. As of 2018, it had four cases in the courts, all of which involve the arrest of MNRS members for illegally harvesting fish and game — individuals who then claimed métis status in their defence.

Systematically, Leroux exposes the fraud these organizations are committing in their quest for Aboriginal status. Through a detailed genealogical study, he shows that many root ancestors being used to make claims were not, in fact, Indigenous. The MNRS, for its part, also buttresses claims with DNA ancestry testing, through a company called Accu-metrics. Leroux, a French descendant with very few long-ago Indigenous ancestors, tested his own DNA twice using the same kits. Unsurprisingly, each test returned different results, one claiming he has 9 percent Native American ancestry, the other 5 percent. But a 2018 CBC investigation provided the most damning evidence. Using the same kits, researchers found that a French poodle named Mollie had 5 percent Indigenous ancestry, while Snoopy the chihuahua had a whopping 20 percent.

Hanging one’s Indigenous identity on a sole, long-ago forebear is highly problematic. A single individual living thirteen generations ago represents a negligible connection, roughly “1 in 8,192 ancestors,” or about a hundredth of a percent. White Canadians of French descent have five times as many English and other European ancestors, so why the focus on Indigenous ancestors? If race-shifters have many more English, German, and Portuguese ancestors than Indigenous ones, why not stridently claim those identities as well?

At the heart of self-indigenization is a fundamentally flawed emphasis on biology and so-called blood quantum. Genuine Métis identity is rooted in an intricate network of kinship ties and responsibilities, as well as a nation-to-nation relationship with the Crown. It involves practising a culture and speaking a language distinct from those of First Nations and settler ­communities. It means having connections with a living Métis community and being recognized by that community as a member; biological ancestry plays but a small part in identity.

Similar ideas are shared across Indigenous cultures, many of which prioritize “a system of social obligation and mutual responsibility between related individuals — between members of a family — as the foundational relationship.” Time and again, this reciprocal world view has put Indigenous nations at odds with settler nations, which favour competition, with one party advancing its interests at the expense of the other.

“At the heart of self-indigenization is a fundamentally flawed emphasis on biology and so-called blood quantum.”

The tricky part, as Leroux is careful to point out, is that many Indigenous people have been separated from their families and communities through state-led efforts: residential schools, the Sixties Scoop, and continuing discrimination in the child welfare and criminal justice systems. People dispossessed through such policies do have a legitimate claim to their identities, though they may not have a connection to their communities, traditional cultures, or languages. Ultimately, though, citizenship and identity cannot be based on just a personal desire to belong. It requires the group’s acceptance. As the Council of the Native American and Indigenous Studies Association’s statement on Indigenous identity fraud puts it, “It is not simply who you claim to be, but also who claims you.” Or, as Leroux quotes the Abenaki chief Gilles O’Bomsawin, “We know our people.”

Yet the vexatious movement grows. Census data from 2011 and 2016 shows that self-indigenization in Eastern Canada and the United States continues to rise. Self-identified métis organizations are gaining traction. In total, they have mounted nearly fifty court cases in Quebec, New Brunswick, and Nova Scotia alone, wasting court time and resources as they pursue fraudulent status. And as more groups form, their collective power increases their capacity to undermine real Indigenous sovereignty. In effect, we are witnessing a renewed assimilation campaign.

Though the White Hippie Lady may seem harmless, she’s not. Her eagerness to take things without giving anything in return represents a larger colonial relationship. She’s there, dancing, when European descendants erroneously claim métis status to claim Aboriginal rights for themselves. She’s there, swaying her long hair, when the Crown repeatedly violates the terms set out by treaties, leaving First Nations communities with a fraction of what was originally agreed upon. She’s there, clumsily swinging to the music, when Indigenous communities are denied access to basics like clean drinking water and schools. She’s there, her body gyrating, while unfettered resource extraction fails to compensate the people whose lands are destroyed in the process. She’s there, kicking her feet to the drum, when the justice system allows white men to kill Indigenous men without repercussion. And she’s there, maniacally twirling with her eyes closed, while Indigenous women and girls are murdered at six times the rate of non-­Indigenous women.

Right now, the world is witnessing a sea change on issues like climate change, misogyny, and xenophobia. Yet the mistreatment of Indigenous peoples in this country continues to be addressed in a superficial and meaningless way — under the banner of “reconciliation.” The entire nation must confront these latest efforts to claim “Indigenous lands and life.” Whether allies or accomplices, all Canadians must educate themselves and unlearn the stereotypes that pervade the national consciousness. They must channel their wealth, power, and expertise to support actual Indigenous organizations and communities fighting at the front lines. Most importantly, Canadians must nurture a sense of reciprocity and realize that they have been taking without giving for too long.

Until then, the White Hippie Lady will dance on, while we watch from the sidelines, urging her to finally open her eyes.

As settlers try to go about partnerships and friendships, learn reciprocity and humility . . . this piece is so important and such a blessing.