In the mid-1990s, I attended Bishop Francis Allen Elementary School in Brampton, Ontario. Like millions of my peers who went to public school at the time, I have a strong cultural memory of pizza — specifically, free pizza. That’s because, like roughly 14 million American students and countless others in Canada and other countries, I participated in Pizza Hut’s Book It! program.

For my generation, Book It! was a fact of life. Founded in 1984, it offered carbs in exchange for reading. If your classroom was enrolled, your teacher would distribute blue Book It! badges early in the year. Students who met their monthly reading goals earned star stickers: five stars on your badge landed you an award certificate, which you could redeem for a single-topping personal pan pizza. I don’t remember much about what I read in those years, but I do remember sliding into a booth at Pizza Hut and cutting into that doughy corporate largesse.

Like most kids, I knew I could game the system by either picking books well below my reading level or simply lying. No matter. For Pizza Hut, success had little to do with whether we actually read Roald Dahl or Judy Blume. Like any corporate social responsibility initiative, Book It! was valued as a tool to engender brand loyalty and engagement (and was less concerned with building a more literate society). That still seems the case today. On social media, the program’s cachet is chiefly nostalgia. Several years ago, to celebrate the thirtieth anniversary of Book It!, Pizza Hut developed a short-lived alumni program for adults — a cheesy opportunity to earn a free pie yet again. 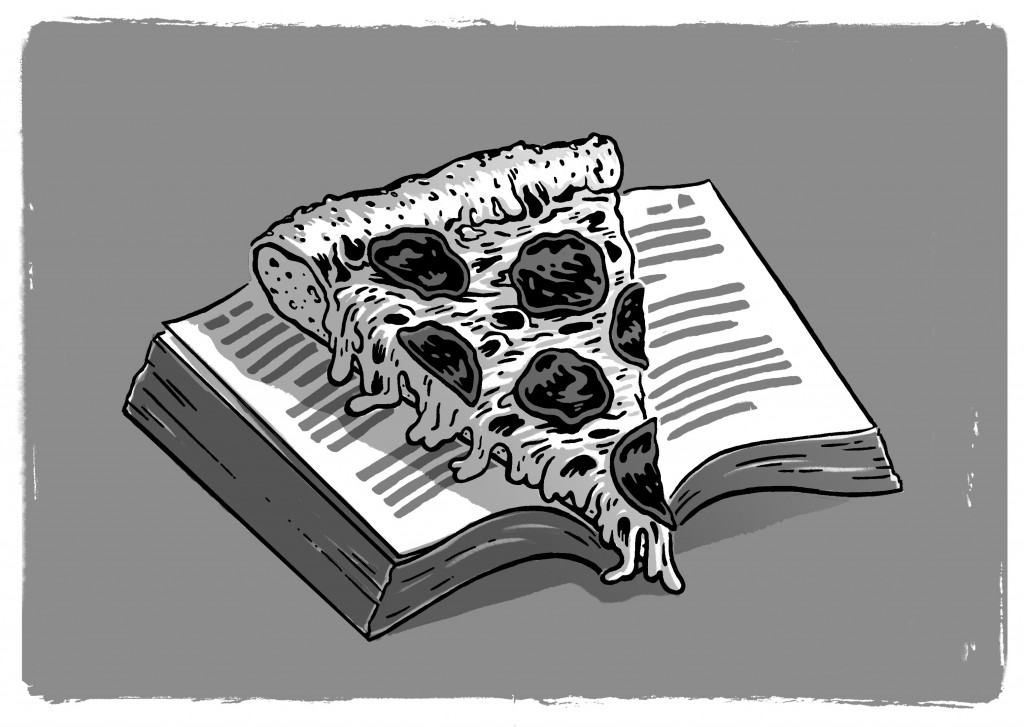 In Captive Audience: How Corporations Invaded Our Schools, Catherine Gidney of St. Thomas University in Fredericton documents the rise of sponsorships like Book It! Specifically, she examines how the economic turmoil of the 1970s, along with cuts to public education in the following decades, supercharged corporate influence in the Canadian classroom. As provincial support for education waned, business interests doubled down, using their own dollars to shape curriculum and target young students as consumers in the making. Whether they have succeeded or failed, such efforts have hardly been defined by altruism.

In the first decades of the twentieth century, merchandisers and trade associations alike recognized the opportunity that the classroom promised, and they went about producing teaching aids that instructed students on the merits of industrial production. The manufacturer Bristol-Myers, for example, offered posters that promoted the importance of its Ipana toothpaste for dental health, while Canadian Sugar Factories produced guides about the country’s sugar beet industry. Such materials targeted educators, not yet students, and were offered up as useful instructional materials available at next to no cost. While a number of Canadian and American educational organizations, including teachers’ unions, warned of corporate hucksterism throughout the 1930s and 1940s, many classrooms continued to rely on sponsored ephemera.

In many cases, teachers lacked suitable alternatives to the branded posters and pamphlets. And because of financial constraints, school boards often pressured them to continue using the giveaways. In the late 1950s, the New Yorker critic Dwight Macdonald put his finger on what was happening, when he described North American students as “a caste, a culture, a market.” The coming together of capitalism, mass education, and childhood was now an unalterable phenomenon, increasingly bent on creating, monitoring, and satisfying consumer desire.

“The retrenchment of provincial funding created a vacuum that corporate interests quickly moved to fill.”

In Gidney’s telling, the economic destabilization of the late twentieth century further transformed the corporate creep, with the supposed pedagogic focus shifting from an industrial economy to one structured around service, technology, and finance. As provincial governments hollowed out budgets for primary and secondary classrooms, they simultaneously pushed teachers and school boards to do more with less, covering the technological costs associated with computers (and later the internet) to meet the changing needs of the information age.

The retrenchment of provincial funding created a vacuum that corporate interests quickly moved to fill, and they took three principal approaches: business partnerships, for-profit educational television, and vending machine wars, driven by aggressive contract negotiations by the likes of Pepsi and Coca-Cola.

Partnerships saw commercial firms literally enter the curriculum. In the mid-1980s, for example, Hewlett-Packard established a program with the York Region Board of Education, in Ontario, where students could earn credits by doing rudimentary office work, writing basic software code, and even vacuuming company cars. In exchange, HP set up “business labs” in schools using surplus or out-of-date equipment. The board offered its new-found corporate partner use of recreational facilities and other school spaces for conferences, and it let company representatives sit on advisory committees charged with curriculum decisions. The Hewlett-Packard arrangement is a particularly egregious example of partnerships that were framed as educational solutions yet effectively provided free labour and publicity to multinationals.

The demand for new technology justified other attempts to fully commercialize classroom hours. The rise and fall of Youth News Network, founded in 1990 by a former Manitoba Progressive Conservative Party organizer, Roderick MacDonald, provides an instructive case study. YNN drew its inspiration from Channel One News, a television platform integrated into American middle and high schools throughout the 1990s (it launched the journalism careers of Anderson Cooper, Lisa Ling, and Maria Menounos, among others). YNN promised to provide schools with satellites and AV equipment. In exchange, teachers were contractually obligated to make students watch twelve and a half minutes of YNN content on 90 percent of school days. Broadcasts contained fun facts, short news segments, and, of course, advertisements. In effect, school boards were allowing the network to sell their impressionable students to advertisers like Long & McQuade, Trident, and Rogers.

Controversy surrounded YNN almost from the start, and it soon went dormant. Then, in 1999, MacDonald and YNN returned under the aegis of Athena Educational Partners. Athena pivoted away from relationships with school boards and instead targeted cash-strapped principals who had less time, money, and negotiating power. In early 2000, the company launched a pilot at Meadowvale Secondary School, in southern Ontario’s Peel District School Board. Again, controversy ensued. Students protested the blatant commercialization of teaching time, and critics lambasted YNN for surveilling children and teachers alike. The YNN-supplied televisions, it turns out, were equipped with technologies that could monitor the length and time of the broadcast to estimate how many eyeballs YNN was reaching and for how long the channel was playing — crucial data for setting advertising rates.

Meadowvale administrators treated students who criticized YNN punitively. Those who wished to opt out of watching had to secure parental consent and explain their objections in writing. They then had to spend their twelve-plus minutes of daily YNN time sitting in silence in library carrels. A captive audience indeed. YNN folded in 2001, but its short-lived existence portended similar spats to come.

Throughout the early 2000s, as Coca-Cola, Pepsi, and others negotiated with school boards for new captive markets, uneven power relations led to a series of disastrous contracts, all of which gave multinationals the upper hand. When privacy complaints forced school boards across Canada to open their books in the early 2000s, critics learned that companies often tied cash payments to consumption quotas. Such contracts could be extended automatically, with no payment for multiple years, if a school board failed to sell enough pop. These agreements incentivized schools to push products any way they could, lest they carry Coke at a loss.

“As provincial support for education waned, business interests doubled down.”

Eventually, many provinces began to ban soft drinks and sugary beverages outright from school campuses, but even those policies were often debated the wrong way. In 2013, for example, Ontario’s auditor general reported that moving to healthier options in primary and secondary schools had led to a 25 to 45 percent drop in cafeteria revenues — an economic failure, in other words. Critics of the soda bans warned that drops in revenue would result in cuts to extracurricular programs. For them, finances were the primary concern — not nutrition and student well-being. Once again, only contracts with multinationals, and not actual funding from provinces, were framed as the budgetary solution.

While I collected my Book It! stamps, I experienced the corporate touch in other ways. In grade 5, my class took a field trip to a local Tim Hortons to observe the doughnut baking process. My after-school program had a board game called Pizza Party, also sponsored by Pizza Hut, that taught us how to convert fractions. In grade 7, we took a trip to Swiss Chalet, where we watched workers prepare quarter-chicken dinners at record speed. When I later attended Cardinal Leger Secondary School, in Brampton, I had the option of taking a certificate course sponsored by Cisco Systems. These were all framed as ways to think about work after graduation — especially for those students in the applied streams.

Concerned as I was about my next pizza, I never gave much thought to what my parents made of all this. But that’s how Gidney ends her book, looking at the latest stopgap in primary and secondary school financing. In recent years, parents have become targeted to generate fundraising dollars that might make up for insufficient government funding. Provincial ministries and school boards alike have lauded various kinds of fundraising endeavours, such as diverting provincial casino profits into public education and enlisting third-party charity organizations that plan giving events.

Reliance on parental labour and philanthropy, however, only exacerbates existing inequities. Schools in wealthier districts have access to more substantial fundraising programs, while those in poorer ones find little return. Some luckier schools in Toronto have shared surplus donations with others, but fundraising programs by and large mask ongoing and chronic cuts to public support. Entrepreneurial spirit works only where there is a reliable pool of parents with cash to give (or gamble).

In a society defined by precarity, marketers and merchandisers have offered teachers, principals, parents, and school boards easy ways to make ends meet. But the effects of corporate-sponsored education go much further than filling the financial gaps. Captive Audience frames the history of such efforts as part of a larger transformation in Canadian classrooms. We face a curriculum increasingly bent toward service ventures and workplace learning — a curriculum that enables corporate actors to set the terms of the debate, to shape how we understand ourselves and one another, and to narrow the value of a public education by matching it solely to what companies need at a given moment. And that’s how education becomes less about our collective well-being and more about the primary needs and concerns of a business class.

Dan Guadagnolo is a lecturer in the Department of Historical Studies at the University of Toronto.