Andy Hanson
Between the Lines
276 pages, softcover and ebook

The labour historian and former elementary teacher Andy Hanson’s well-researched account of the rise of union consciousness in the ranks of Ontario’s primary school teachers, Class Action, is a compelling and readable, if flawed, narrative. Through a progressive lens, this one-time labour activist traces a history of increasing militancy, over several decades, and many victories — with more than a few bumps in the road along the way. He also shows how gender played a dominant role in this history, almost unique in Canada’s labour movement, from the very beginning.

Bringing together a number of local associations, female elementary school teachers formed their own union in 1918: the Federation of Women Teachers’ Associations of Ontario, or FWTAO. Their male counterparts — mostly teaching higher grades or occupying senior administrative positions, at better pay — followed suit in 1920, when they founded the Ontario Public School Men Teachers’ Federation, or OPSMTF.

Early on, the women’s union rejected the idea of merging with the men’s one. These were teachers who wanted their own collective voice and feared that an amalgamated union would dampen it. As part of the FWTAO, they could address issues that affected them as women, including pay discrimination and lack of promotional opportunities; almost inevitably, members came to identify with the wider ­feminist movement of the 1960s and ’70s. The OPSMTF, on the other hand, opposed measures like employment and pay equity for decades. Nonetheless, the two bodies did face common challenges, and they effectively cooperated and coordinated in matters of mutual interest. 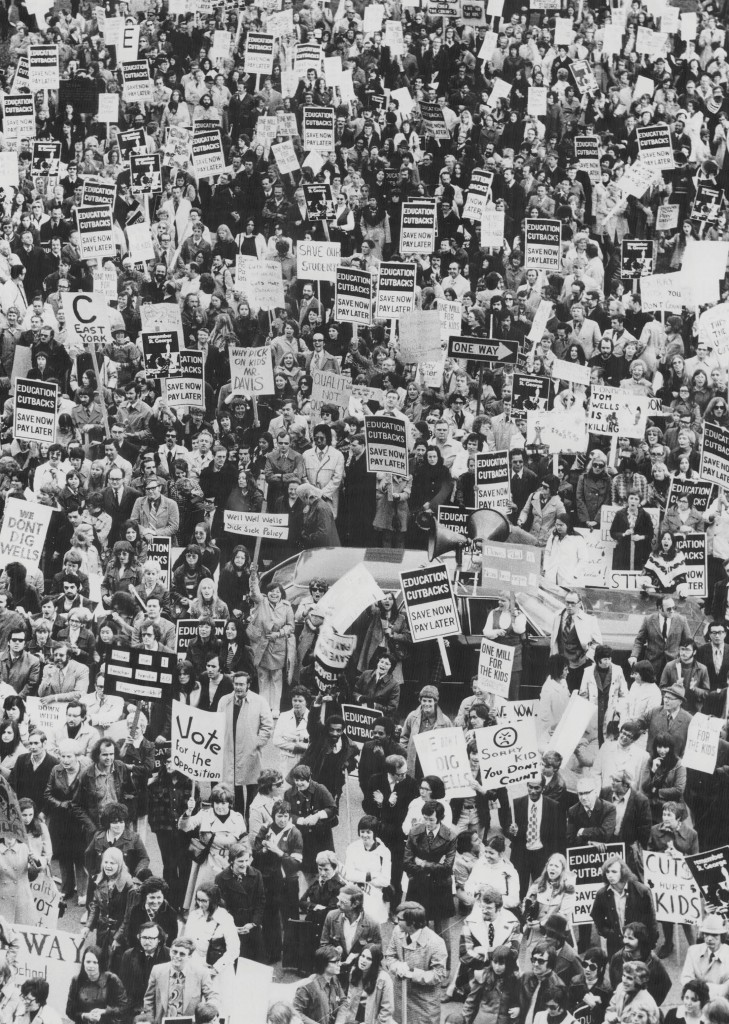 Militancy was thrust upon them.
Image by Frank Lennon, 1973; Toronto Star; Getty Images

Education budgets have been a favourite ­target of successive Ontario governments, and over the years these cutbacks have had their inevitable consequences: degraded working conditions and weakened job security. This was especially the case as increasingly heavy-handed anti-labour governments of all political stripes took control of Queen’s Park from the ’70s onward.

Some would not immediately associate labour combativeness with teachers; as Hanson chronicles in detail, militancy was thrust upon them. Their sense of professionalism — that two-edged sword — kept them aloof from the wider labour movement for a time, but it also fired the spirits of those concerned about their pupils.

In 1973, which proved to be a pivotal year, the Progressive Conservative government of Bill Davis introduced legislation that would have denied teachers the right to collective bargaining and the right to strike. In response, a total of five unions — the FWTAO and the OPSMTF were joined by teachers in the public secondary schools and the Catholic and French-language systems — walked out illegally that December, shutting down almost every school in Ontario. This unprecedented show of strength was sufficient to beat back the proposed legislation, and eighteen months later the teachers had a labour relations regime that included the right to strike. Although the FWTAO and the OPSMTF were initially hesitant to set up strike funds, these were in place by 1976.

Key issues for both memberships included seniority protection in the face of declining enrolments, class size, preparation time, retirement gratuities, and “exploding contracts,” under which new hires, in some school boards, would be rehired each year — a process that denied them seniority and annual increments. The pressure on the FWTAO and the OPSMTF to amalgamate steadily intensified. By the early ’70s, various blended locals had already sprung up, and the OPSMTF began to offer voluntary membership status to women in 1972. (A decade later it removed the word “men” from its name.) In 1979, the two unions agreed upon a “one-ballot-box” system for counting strike votes. And in 1984, the voluntary member Mary Hill was elected president of the OPSTF.

Then, in 1994, legislation that had formally separated the memberships along gender lines was struck down under the Ontario Human Rights Code. For the FWTAO, this was the final straw. Hanson sees the irony: “Almost eighty years of women’s unionism in Ontario’s education system was brought to an end by human rights legislation intended to advance women’s equality.” After lengthy and intense negotiations, a new amalgamated union, the Elementary Teachers’ Federation of Ontario was founded in 1998.

“Public support for the educators rose, in spite of a vicious anti-teacher campaign by the government.”

With years of organizing behind them, members of ETFO were already battle-hardened veterans, especially considering what they had recently gone through. In 1993, Bob Rae’s NDP government had imposed wage cuts and freezes, sparking angry walkouts. But Ontario hadn’t seen anything yet. Mike Harris began to rip and tear as soon as he was elected premier in 1995. He repealed Rae’s employment equity and pro-labour legislation, and his Progressive Conservative majority went on to slash the provincial education budget by a billion dollars. For good measure, it also indicated its intention to abolish collective bargaining for teachers.

An unprecedented strike by all five unions took place in 1997. The teachers reached out to the Ontario Federation of Labour, engaged in its own Days of Action against the Harris government, for the first time. Public support for the educators rose, in spite of a vicious anti-teacher campaign by the government. Although the uprising did not succeed in turning back Harris’s regressive agenda, the teachers did retain their collective bargaining rights.

Hanson’s view of these events is somewhat jaundiced — and not without reason. Theatrical one-day strikes, such as the Days of Action, were indeed “relatively ineffectual” (seasoned activists and leaders always rightfully worry about the day after). Yet those hoping that a general strike against Harris would follow were just naive. “The opportunity for a general strike was available,” Hanson writes, referring to the teachers’ and OFL uprisings, “but the OFL leadership would not reach out and grasp it.” He makes this claim immediately after he notes that the teachers’ unions indicated no interest in any such thing. As for the OFL’s own protests, there was little taste among the rank-and-file affiliate membership — as opposed to the activists — for a full-blown provincial shutdown, and the ­leaders knew it.

Like the other teachers’ unions, the amalgamated ETFO did maintain its spirit of resistance, however. In fact, it was even more militant than Hanson tells us. (For some reason, he elides completely the substantial protests against Ontario’s Liberal government, which in 2013 imposed brutal contracts that included wage freezes and the reduction of sick leave benefits.) In 2000, the elementary teachers formally joined the OFL and the Canadian Labour Congress. The transition from two independent employee associations to a blooded union in the labour mainstream was now complete.

ETFO also took a principled progressive stance when it came to politics: unlike the other teachers’ unions, it refused secret Liberal government grants and endorsed the provincial NDP in 2018. Less than two years later, members were in the trenches once again, fighting Doug Ford’s plans to impose more cuts. Then COVID‑19 took the wind out of their sails. Still, the union managed to hold the line on class size, special-education funding, and membership benefits. The struggle continues, however, as the premier shows no signs of stopping: his fall 2021 fiscal review cut half a billion dollars from the education budget. Judging from history, ETFO is up to the challenge.

While the story he tells is an important one, Hanson’s perspective is excessively narrow. Education is not an industrial enterprise: workers versus bosses. It’s a social project that involves several legitimate stakeholders: ­teachers, students, parents, and the wider public. But Hanson seems to object to any checks on teacher autonomy. For instance, he dismisses as “neo-liberal” the establishment of a professional oversight body, the Ontario College of Teachers, although such organizations are commonplace in education and other professions under a variety of governments across the country.

Hanson also sees the formation of school councils — which give parents an advisory role in their children’s schools — as a threat. (These were initiated under Rae, incidentally, not Harris as Hanson claims.) And the following passage, which will appall the parents of special-needs children in particular, is frankly embarrassing, shudder quotes and all:

Doctors and psychologists, having entered the debates on schooling during the 1960s, had imbedded the terms “learning disabilities,” “dyslexia,” and “attention deficit disorder” into the jargon of education. The development of “special education” inserted another layer of professionals between teachers and their students, forcing teachers to give up authority over certain aspects of the education process in the classroom. The experienced eye of the teacher was supplanted by assessment and instructional technologies developed by educational psychologists who claimed mastery in the fields of human development and cognitive testing.

One might have preferred a history of Ontario educators that took a more generous and ­inclusive approach. Nonetheless, keeping its limitations in mind, Class Action is a solid account of how traditionally mild-mannered workers became transformed, by themselves and by hostile circumstances, into a fighting force to be reckoned with in Ontario’s labour movement. There are more than enough lessons here for everyone.