We pick up the story of Emily St. John Mandel’s The Glass Hotel near the end. The year is 2018, and Vincent, a woman who lives a nomadic life on a shipping freighter, has gone overboard, “plummeting down the side of the ship in the storm’s wild darkness.” She will form the central thread through this wandering narrative that wears its flightiness on its sleeve.

Jump back to 1999. Paul, Vincent’s half-brother, runs off to Vancouver after accidentally killing someone by giving him bad ecstasy.

Step forward six years. At a luxury Vancouver Island hotel owned by the wealthy investor Jonathan Alkaitis, Vincent works as a bartender, Paul as a janitor. But we’re there with Walter, the manager. “This place was the opposite of Toronto,” Walter thinks. “And wasn’t that what he’d wanted?” 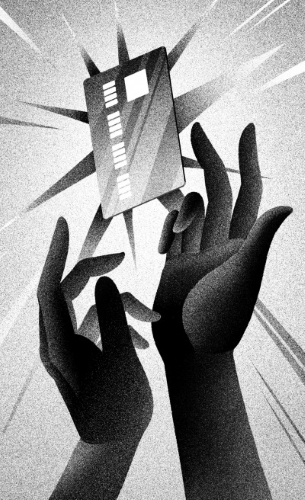 These are the first three chapters. They leap, as the whole novel does, across time and place and between multiple voices and character perspectives. The narrative later shifts back to Vincent as she flees with Jonathan to start anew. She trades herself —“whenever he wanted her”— for “a credit card whose bills she never saw, a life of beautiful homes and travel, in other words the opposite of the life she’d lived before.” Even in times of plenty, though, the desire or need to escape remains. For this is also a book about dreams — dreams of better lives, but mostly dreams that are too good to be true.

Many of these dreams are tied up with Jonathan, whose riches come with a secret. His undoing is foreshadowed early on, and so we know that Vincent’s new life —“the age of money”— won’t last. When Jonathan’s scheme collapses, amid the 2008 financial crisis, it plunges many into disorder and some into a “shadow country,” where those who have “been cut loose” survive on shrunken lives, readily ignored by the few who remain in comfort and in wealth. Mandel unveils the grand scale of Jonathan’s deceit in a cinematic section that slides and cuts between perspectives, never failing to fold even the most tangential character back into the expanding story.

This roaming style serves to expose an underlying fragility and instability. The book skates on the edge between nature and civilization, life and death, the real and the imaginary. Its shifting locations, time periods, and ­perspectives create a tantalizing sense of dislocation and ghostliness that is matched by the tone of the prose. The narrative is told largely in voices that move back and forth in time, that seem to know where the story is going and have long come to accept it. It feels like a memory, a tale foretold. Walter’s narrative at one point pauses to remark on an event from years later, when journalists come to interview him about Jonathan. As a hotel manager, he explains, he “lived and died by his discretion,” but “there wasn’t much to tell. Alkaitis was interesting only in retrospect.”

Through this structure and tone, Mandel narrates the slipperiness of life produced by the financial crash, which exposed the rotten foundations of a world that once seemed infallible. The fallout of the crash is in many ways The Glass Hotel ’s driving force. In her recent essay collection, Trick Mirror, Jia Tolentino calls it “the event that arguably kick-started the millennial-era understanding that the quickest way to win is to scam.” If Tolentino documents the amoral opportunism that the crisis inspired, Mandel relates the spiritual, moral, psychological, and financial degradation of a world that can seem to be scams all the way down.

“Try as they might, these characters cannot fully escape the world they are running from.”

As a result, the novel flirts with nihilism while it considers both the scammers and the scammed. Late in the tale, for instance, a reporter interviews Jonathan and notes that for his scheme to succeed, people had to believe in a story that didn’t make sense. “But everyone was making money, so no one cared.”

Other characters are prone to seeing how far they can bend their justifications for immoral behaviour. Long before one of Jonathan’s employees explains that “it’s possible to both know and not know something,” Paul, in his teens, reassures himself: “Just because you used your stepmother’s presumed death to start over doesn’t mean that you’re not also doing something good, being there for your sister or whatever.”

More often, particularly as we cycle through those connected to Jonathan and trace Vincent’s life after him, the dominant theme is helplessness. Resignation is pervasive, reflecting the idea that, even if justice could be done, it wouldn’t repair a system that proved so insubstantial. If at times The Glass Hotel ’s tightly woven plot feels too self-contained, as if nothing could ever break in, it also creates a panopticon-like feeling: Try as they might, these characters cannot fully escape the world they are running from. Traces of it, perceptible or not, follow them and reappear eventually.

The fractures and instability at the heart of the book feel drawn from our current moment. But, of course, they have been with us far longer. “I believe that we and those who come after us will go on fighting to make ourselves at home in this world,” the American philosopher Marshall Berman wrote in 1982, “even as the homes we have made, the modern street, the modern spirit, go on melting into air.”

In a world that has only melted further, in which too many so‑called certainties have shown their true colours, The Glass Hotel follows characters who have grown tired of fighting, but for whom the fight continues anyway. Who keep running, even if it’s abundantly clear that the race is rigged. Who believe disappearing — into drugs, solitude, wealth, nature, or “the space between countries”— feels like the only way out. “I’m happiest when I’m away from other people,” says one of the few individuals who arguably emerge from the novel unscathed.

In the end, there is little actual escape, only moments when characters get sucked down, discarded, or forgotten. This dark vision sneaks up on us because Mandel relates it lightly, with brisk pacing and fluid writing. But beneath the darkness flows an undercurrent of hope that we might one day give up the dreams that blind us, the dreams that keep us thinking that something can come from nothing. It’s only if we give these up, the novel implies, that we may be able to stop running — from the past, from our mistakes, and from ourselves.

Tomas Hachard wrote the novel City in Flames, due out next spring.