Uncertain Harvest: The Future of Food on a Warming Planet

When it comes to food, our expectations of the future often tend toward the dystopian. At the turn of the nineteenth century, for example, the English political economist Thomas Malthus wrote a now-infamous essay, in which he argued that while population grows exponentially (doubling every generation, roughly), food supplies grow arithmetically, meaning they will never be able to keep up. Eventually, unchecked growth will send the global population toward mass starvation, disease, and war. Malthus’s most extreme ­followers promoted forced sterilizations to regulate population numbers, and many historians believe that the Malthusian philosophy — which saw famine as “nature taking its course”— led to the British government’s lack of action during the Irish potato famine, which killed more than a million.

Though Malthus’s ideas have been used to justify horrible measures, they also tapped into a more general and quite modern anxiety: the relentless feeling that a global food breakdown is just around the corner.

The situation has arguably worsened since Malthus’s time. Ongoing colonial practices, for one thing, have largely destroyed Indigenous food systems that had sustained communities for generations. And while the green revolution of the 1950s and ’60s, with its chemical fertilizers and fossil-fuel-powered technologies, led to a substantial increase in productivity, it also created a wasteful agricultural industry. Even amid a global food surplus, rates of both hunger and obesity continue to rise. Farms are bigger and fewer in number every year, and it’s practically impossible for new farmers to start a financially sustainable enterprise. Scholars have described the complex web of food trade between countries as resembling the financial system right before the 2008 crash, with just a few nations exporting goods to the rest of the world. Population growth remains a daunting prospect as well: by 2050, farmers will need to produce 50 percent more than they do now. 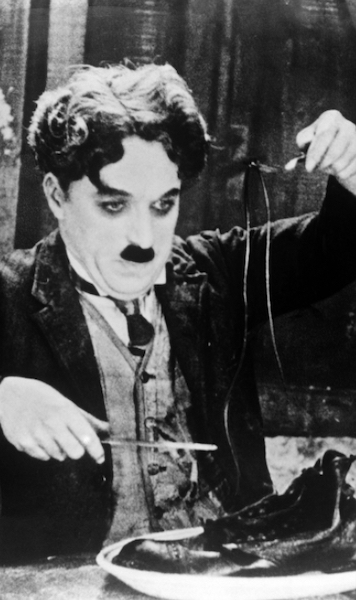 When dining is dicey.
Image by ClassicStock; Alamy Stock Photo

Since Malthus’s predictions of mass starvation, however, a new anxiety has come to overshadow the rest. The question is not simply whether we can produce enough to feed future generations, but rather whether climate change will hamper our ability to continue feeding ourselves today. These fears are the basis for Uncertain Harvest, by Ian Mosby, Sarah Rotz, and Evan D. G. Fraser. There’s a current of unease that runs throughout their book: the possibility that we’re on the brink of nutritional collapse. As droughts, floods, and natural disasters become more common, the global food network is increasingly threatened; researchers estimate any one event could lead to a 5 or 10 percent loss of today’s “global calories.” And dramatic changes in temperatures and ocean currents could substantially shorten growing seasons, causing a global-calorie loss of 30 percent. The prospect is enough to put anyone who eats on edge.

It must be said that this book will appear in a very different context than the one in which it was written: it may be read by a public largely stuck in quarantine, hoarding food while we watch the economy plummet. Climate change didn’t cause the novel coronavirus crisis, at least not directly, but the pandemic has brought to life many of the authors’ general concerns about the future — not least their assertion that “even a seemingly small disruption” could cause the global food system to fall apart. Around the world, airplanes are grounded, truck drivers and farm workers are quarantined, and shipping containers are lost or stalled amid the chaos. Lockdown measures, tariffs, and export bans meant to limit the spread of the virus could also restrict the flow of food between countries. Even if that doesn’t happen, the United Nations Food and Agriculture Organization has warned that any crop stockpiling by countries could fuel global food inflation. Meanwhile, people are panic buying more than such staples as pasta, flour, and fresh meat. They’re also stocking up on items that expose a deeper anxiety: in the United States, vendors are reporting a run on seeds and baby chicks.

The past two centuries have seen a growing disconnect between consumers and what they eat: they have no knowledge of where it comes from, how it’s produced, and how much it costs others. In a sense, because COVID-19 has forced many of us inside to worry about our supplies of eggs and toilet paper, it offers a perfect opportunity to examine our relationship to food.

The global food system is a chaotic muddle of players with a range of motivations, all of whom tend to speak past one another with little consideration of the full picture. Whom you listen to depends on whose well-being you wish to prioritize: the farmers trying to make a living, the agricultural technology companies, the animals that are raised, the many affected communities, or the consumers who buy the final product.

“The global food system is a chaotic muddle of players with a range of motivations.”

The three authors present Uncertain Harvest as “an admittedly unconventional collaboration” between food scholars with different points of view. Fraser is a “techno-optimist,” who believes that innovation will help us survive — meaning, very roughly, he’s on the side of large farmers and manufacturing companies. Rotz is “more of a techno-skeptic” and a committed climate change activist; she generally prioritizes communities and small-scale farmers. And Mosby is introduced as the neutral third, a possible representative for the consumers who just want to eat well. Over the course of seven chapters — each named after a representative basic, such as kale, milk, rice, and even algae and crickets — the authors illuminate many common predictions, from DNA bar-coding to robotic farms, and present their conclusions in the guise of a friendly argument.

They also provide readers with enough digestible information to form their own considered opinions. One of the most fraught topics in the food world, for example, is the use of genetically modified seeds. For decades now, DNA from bacteria has been inserted into the genetic material of corn, soybeans, and other crops, from wheat to zucchini, to help create pest- and herbicide-resistant strains. The resulting seeds are often touted as the future of agriculture — a catch‑all solution enabling ultra-efficient farming that can stave off weeds and pests while providing needed nutrients. Proponents of genetically modified organisms say such advances could solve hunger in the so‑called global South; others say they are harmful products created by self-serving herbicide companies. The conversation has become so heated that there is little reasonable dialogue between the two sides. Prominent advocates have even accused GMO opponents of being “culpable in the deaths of tens of thousands of children” in the developing world. Consequently, Uncertain Harvest ’s measured summary of the situation feels like a breath of fresh air.

“Too often,” Fraser, Mosby, and Rotz write, “the debate about GM crops seems to get caught up in hypotheticals rather than more than two decades of global experience in actually growing GM crops.” First off, though GM products are often marketed as a solution to poverty and hunger, they are rarely manufactured or sold for that purpose; instead, the majority of seeds are developed for industrial farming, and most of the product is eaten by livestock, not humans. Modified seeds usually keep their traits for only one generation, which means farmers need to buy new supplies every year in order to reap any benefits. And analyses of crop yields have shown that the benefits aren’t always as advertised.

“It must be said that this book will appear in a very different context than the one in which it was written.”

If genetic modification is to help farmers sur­vive in a future plagued by climate change, it would be by creating seeds that are resistant to droughts or flooding — but that’s simply not where the industry is headed. Before genetic modification can save us, then, the industry needs an overhaul. That same take-away can be found in Uncertain Harvest : “Creating the future food system that we all want will mostly come down to good public policy rather than that One Big Technological Fix.” It’s a reasonable insight, though it’s been drawn plenty of times before — and it has never yet led to productive action. Most industries don’t want to be overhauled, and big corporations tend to be powerful enough to halt any drastic action.

Uncertain Harvest offers plenty of statistics from around the world, but it is less successful at offering specific solutions or guidance of its own. That might be a conscious decision on the part of the authors, who seem to have put a concerted effort into keeping their material as simple and digestible as possible — sometimes to the detriment of the final product. The writing is so pared down that some topics are dealt with only superficially, and passages are peppered with artificially hopeful anecdotes that sound uncomfortably close to press releases. (The chapter on GM crops is again a representative example: it begins with a rosy description of a meeting with one of Fraser’s colleagues at the University of Guelph who works with subsistence farmers in Nepal, praising “his usual measured and careful tone.”) Other attempts at accessibility are more cringeworthy, from describing debates about automated milking systems as “what Twitter users might call #FirstWorldProblems” to an unfortunate subtitle in the conclusion: “(Much More Than Fifty) Shades of Grey.”

Some of these stylistic faux pas can be forgiven: it’s difficult to write a book about the grim future of food that anyone will want to read — particularly when the world already feels on the brink. And though Uncertain Harvest doesn’t provide much guidance for individual consumers, it does offer some helpful lessons for the apocalypse. Because food, health, and society are deeply intertwined, most food production challenges are rooted in economic and social problems, not in technological limitations that can be solved with more efficient tractors. The best way forward, then, is to focus on the small scale. And it so happens that the first step to revolutionizing the industry — that is, putting everything on pause — has just taken place. It’s as good an opportunity as any to try a “reset.” Buy your pandemic essentials at the local independent grocer, prioritize the organic farmers in your region, and start thinking about what you’d like the world’s food future to look like.