Often when I board a plane, there is a moment when I find myself entertaining the unpleasant notion of it falling out of the sky. So I check the exits, yes, pay half-attention to the safety video, try to remember how Tom Hanks managed in Cast Away. But there remains the unavoidable question: Have I put myself in danger by taking this trip?

And so it was not long ago, when my husband and I headed to the airport to dance the line between keeping calm and carrying on, and willful denial. Ours was a flight from Toronto to London, and we were armed with an extra bottle of hand sanitizer and a small pack of alcohol swabs (all of the disinfectant wipes having been bought up already). The date was March 7, with England holding the promise of fresh blossoms and green grass and, more importantly, my family. The original purpose of our visit, the London Book Fair, had been cancelled a few days before, and restrictions on large gatherings were tightening. But we still had reason to go. Our accommodations were booked, our minds were set. It was fine, we told ourselves. We would be careful. Besides, if the worst happened, at least we would have somewhere to stay.

These were the few days before the pandemic, and panic, swept across Europe; before Italy closed itself to the world and when loo roll was still plentiful. We flew into the night, catching what little sleep we could. What a lot can change in a week.

Such a glorious time to be walking the streets of London, noticing the buildings around the usually heaving Oxford Circus and experiencing the ready availability of a Tube seat (though still not in rush hour; never in rush hour). Come, sit, enjoy, marvel at this timeless city, this fabled city — this rather quiet city. As Samuel Johnson said, “When a man is tired of London, he is tired of life.” The phrase now chirpily adorns mugs and fridge magnets. It is a special place: the history, the energy, the crush of people. But where were those people? 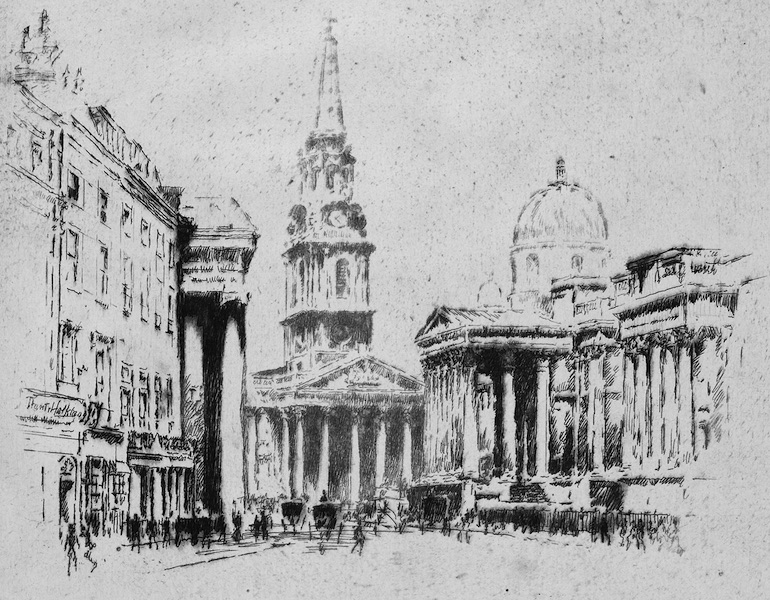 As we strolled about, when we first arrived, my parents remarked it was like London on a Sunday in the 1970s, when the shops were shut and the streets deserted — a day to rest. They had trained here as students (in medical professions, I might add), and they found themselves frequently slipping into nostalgia, remembering another era, long before I was born. My family is not from London. If only we were, it would make for a far simpler conversation when someone inquires about my accent. Instead, we are from a county called Norfolk: sleepy and rural and, to borrow a phrase from an English wit, miles from the nearest lemon. Miles from the nearest everything, in fact. We are used to quiet.

But this quiet was eerie; it was not the city we knew. There were still those going about their lives, still going into work. The sun came out, and the air was filled with the sweet scent of new blooms. We met up with friends, my sister, and cousins, who all seemed their usual buoyant selves. It was the hustle and bustle of everyday life but on a more subdued scale. For very little had actually shut. Galleries were open, museums, restaurants, theatres, and offices, too. Almost, but not quite, business as usual. We made the most of the slower pace: no queues, less noise. From a tourist’s perspective, it was all so wonderful. How lucky we were! With no frenetic crowds, we could walk in a straight line down the pavement. We could cross the road with ease. The air felt fresher somehow, cleaner, without the streams of honking cars revving up a storm. It was as if London had breathed a sigh of relief.

Still, we were unable to shake the feeling that we were staring over the brink of a precipice. There we floated along the edge, diligently wash­ing our hands, but also happily attending the play we had tickets for (we spied only four empty seats, those directly in front of us). What a charmed existence, this period of calm. Then came the beginnings of the storm.

“But this quiet was eerie; it was not the city we knew.”

When Italy went into quarantine, fear suddenly spread and the precipice moved ever closer. Stockpilers swarmed, buying baked beans by the crateful. Eggs, pasta, and toilet paper quickly vanished from the shelves — a curious combination. To think, at the start of our trip we had oh-so-casually picked up an extra pack for the Airbnb, just in case. My sister’s boyfriend witnessed a fight break out in their local supermarket, in Brixton. And still Boris Johnson continued to do nothing, and not really say anything.

The message at the time seemed to be this: it’s your life, you decide. Boris referred to us as this “land of liberty.” So the panickers continued to panic, and everyone else kept carrying on, albeit with more caution. Behind the scenes in Parliament, debates were raging between ministers and epidemiologists, but this is a prime minister who has built his image on boyish optimism shot through with anti-authoritarian defiance. It was no surprise he wasn’t telling us to stay away from the pub.

Poor Boris. Not long ago he was bashing a small gong and triumphantly announcing that he had “got Brexit done.” What a pestilent rain this must be on his parade. And later came the news that he had tested positive and had gone into hospital.

There is something about the British spirit that calls for a no-nonsense approach: We welcome an opportunity to be stoical. We revel in it. We eat picnics on the beach in a howling gale. We have two taps on our sinks that are either freezing or boiling, but never warm. We are prone to thinking, Well, if it hasn’t stopped us before, why should it now? (This is the same spirit that lovingly maintains all of our creaky old properties.) We have an image of ourselves as a nation of plucky survivors, an identity that is made up of our ability to endure and our need to poke fun. The funny side is often the only one we want to see, because humour, for us, is all. It’s anti-establishment, it’s disarming, it’s levelling. It swaggers but is self-aware. Above all else, it snarls at conceit. It is difficult to tell such a nation to take anything seriously. But take it seriously we must.

The day we left London, Justin Trudeau stood in front of Rideau Cottage and called Canadians back home. Americans were moving their flights forward, too, after Donald Trump enacted his ban on foreign travellers from Europe. Again, we thanked our good fortune for our timing.

The plane was a riot of activity; our flight was packed. For the most part, the mood was upbeat, for we were the lucky ones who were on our way back, who were able to change our plans, accepting whatever meandering journey that would take us on: we would not be stranded far away. One or two of our fellow passengers appeared worried, but most smiled and chatted — perhaps more so than usual. An excited toddler in the row ahead of us spoke about his love for Toy Story, while his parents quietly worried that he hadn’t slept for fourteen hours. It was all very normal, even nicer than normal, as everyone was pleasant and attentive, helping with bags and volunteering to swap seats when family members were separated. And then a flight attendant would walk by in a face mask, and there was the reminder that all was not quite as it seemed.

A perception of home crystallizes when you get a bit of distance. You see the good and the bad, but you hold on desperately to the version you left behind, even if it develops a rosy tint. The number of years I have lived away approaches a decade, and it remains a juggling act to balance my longing for England with the contentment I feel with my life in Canada. I try to tell myself that the distance is nothing, that the journey is easy, and the means of speaking and seeing each other over screens so convenient. And it is, most of the time. Until something like this happens.

“It is not often that we witness an event that upends our entire way of existence.”

“And you thought 2016 was bad!” is a Brexit-tinged sentiment I see wafting around the internet. I miss the humour of home, I miss the cheek. The virus has made for fertile ground in the land of memes, and Britain is certainly doing its part. Did you see the one where the violinists played “Nearer My God to Thee,” that sombre Titanic hymn, to an empty supermarket aisle? (They had even donned life jackets.) There was also the tweet that pointed out the disease caused by the novel coronavirus could be sung to the tune of “Come on Eileen”: “COVID-19, oh please keep your hands clean .” This is how we keep spirits up in self-isolation, with a stiff upper lip and a smile. Aim that irreverence elsewhere — break down the power of fear. But then it’s easy to laugh when you haven’t lost someone.

It is not often that we witness an event that upends our entire way of existence. One that will surely echo through living memory and beyond. One with no opting in or out — no choice. Through each world-shaking moment, whether it be good or bad, we emerge a little altered, blinking into a new reality. Where will this leave us, we wonder. And then we realize we won’t know, because by that point everything will be different.

A good portion of the globe is now on lockdown. My parents are back in Norfolk, which normally would be isolation enough, and my husband and I are holed up in Toronto. It is perhaps the loss of community that is most alarming, in whatever place that may be. The Queen gave a rallying speech from Windsor Castle, only her fifth special address in her sixty-eight years on the throne, urging us all to “remain united and resolute” in this time of uncertainty. While we slow ourselves and wait, my sister, a nurse at one of London’s designated virus hospitals, is compelled to act. She is working extra shifts and preparing for the possibility of relocating to a separate staff hotel, where she will work on demand. It is her I am thinking of now, not that I was able to see her and hug her then — though I am thankful for that — but what she will face in the weeks and months to come. We speak, we joke, we say how fortunate we were to have that time in the beautiful stillness of a grand old city. Though I know she is scared. I am too. Already it is different.