The first time I cried was Saturday, March 21. It was a beautiful morning, and I was sitting at my window, staring at the sun-kissed Andes Mountains around Quito. But I couldn’t hear cars honking on my normally bustling street. There were no car alarms, either. The furniture store next door wasn’t blasting reggaeton music as usual. No man was yelling “Aguacates!” as he tried to sell fresh avocados to passersby. And there was no smell of melted cheese from the pizzeria downstairs.

I had woken up to the eighth day of my self-imposed coronavirus lockdown. I had not yet opened my computer to the chaos online, and the uncomfortable stillness sank deep into my skin. For the first time, my body had the chance to feel the weight of what was happening — personally, regionally, and globally.

Ecuador confirmed its first case of coronavirus at the end of February. It was just a single case, in the coastal city of Guayaquil, of a woman who had just returned from Spain. Less than a month later, the country had the highest per capita incidence of COVID-19 in all of Latin America. As of mid-April, that means 7,466 confirmed cases and 333 deaths. 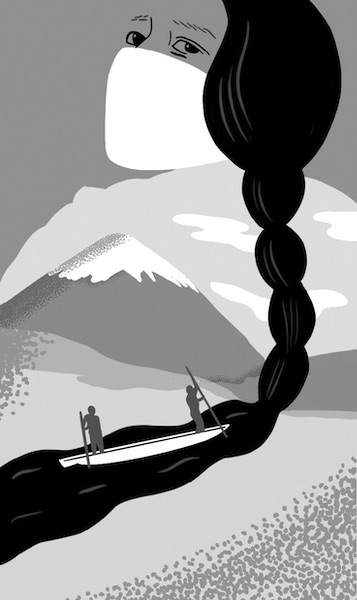 People and campaigns not in the news.
Image by Jamie Bennett

For the longest time, nobody here seemed too worried about the coronavirus, myself included. I first heard it mentioned in conversation in early March, during a meeting with other freelance journalists living in Quito. We complained mostly about the local media coverage: fake news was starting to circulate, saying schools had been closed, politicians infected, and massive numbers of cases confirmed when none of that had happened. Not yet, anyway. Around this time, a Korean woman was attacked in La Foch, a popular restaurant and nightclub district. As she got into a taxi during the middle of the day, a group of young men threw rocks at her head and yelled, “Go home, coronavirus!” Incidents like this just increased our annoyance with the reporting and the panic it was causing.

The following week, local conversations began to change, as the numbers increased worldwide. Some people started wearing face masks in the street, and Quito took to sanitizing the Trolebus and Ecovia public transportation systems.

By Thursday, March 12, life was a little different for everyone in this country of seventeen million. With only twenty cases confirmed nationwide, the government closed schools, cancelled all events with more than thirty people, and warned that movement within the country would soon be affected. Then, like everywhere else, people started packing into supermarkets and emptying the shelves of toilet paper.

That weekend, I met two biologist friends at a local brewery, for what would end up being our last beer in public for a long time. We made sure to sit outside, in a corner, far away from other tables, and talked about the virus, about climate change, and about the Gaia theory, the idea that nature has a way of self-regulating. Could that be what was happening? Could we maybe make peace with the situation if that’s what the planet was doing? We didn’t reach any conclusions, but we counted clever ways to avoid supermarkets and all wished we had vegetable gardens.

On Monday, March 16, the national government declared a state of emergency. It closed borders, cancelled flights, ordered all non-essential stores to shut. Suddenly, the sidewalks were clear of street vendors and people needed special ­permission to go outdoors, unless to buy food or medicine. The government also imposed a 9 p.m. curfew, and police officers and the military took to the streets to enforce it. (The curfew has since been extended to begin at 2 p.m.)

That’s how the walls around us got a bit tighter, and how we were all confined to watch things continue to unfold online, where the panic and chatter are global and disorienting.

Not everyone has the privilege of watching the crisis unfold on a screen, of course. The lockdown forgot to include those who are always forgotten: the homeless, migrants, refugees, market workers, street vendors, domestic workers, sex workers, and others. As #QuedateEnCasa (#StayAtHome) campaigns began to fill our screens, so too did others by feminist and human rights groups. They remind us that the home is often the most dangerous place for women and children in abusive households, and they urge us to be on the lookout for those who need help. They collect donations for families who are dependent on food banks, which were, bafflingly, forced to close. They prepare food baskets for the informal workers, who now have no income, and collect old laptops for kids who don’t have computers.

“Not everyone has the privilege of watching the crisis unfold on a screen.”

But nothing about these people or campaigns has appeared in the news, whose main concern, and only focus thus far, has been the climbing numbers: Fifty-eight cases confirmed. Then 168. Then 506. One death. Three deaths. Seven.

Another group that organized quickly was the Indigenous community. During our first week in lockdown, I spoke to several Indigenous leaders from Ecuador’s Amazon basin, who hustled to communicate with their colleagues, families, and friends via social media and high-frequency radio, and who translated critical information into eleven languages. Then they blocked all entry into the Amazon, allowing no tourists or missionaries and issuing a big shutdown warning to oil and mining operations, whose workers regularly move about the rainforest.

Many Indigenous communities are accessible only by boat, travelling upriver for hours, or by charter plane. They have no access to medicines, much less to doctors or hospitals. If the contagion arrives there, Marlon Vargas, president of the Confederation of Indigenous Nationalities of the Ecuadorian Amazon, worries, “it would be an extermination.”

But just as many Indigenous people returned to the rainforest, heavy rains and major flooding hit several areas of the central Amazon. Sitting in my apartment hundreds of kilometres away, I looked at photos of destroyed houses, bridges, and community gardens. The weather stranded some 3,000 people, who wouldn’t come back to the city for fear of COVID-19.

The Waorani leader Nemonte Nenquimo also cried for the first time the week the lockdown went into effect. She stayed in the town of Shell, away from her territory, so as not to silently carry the virus home. That’s when she turned to ayahuasca, the drink that many Indigenous people use to gain clarity, to access the spiritual world and its wisdom. She had visions of the coronavirus entering her community, but also of an even more threatening epidemic and of wars between powerful nations.

“Look at the Amazon people of the rainforest. For centuries and centuries we lived well,” she told me over the phone. “And now look what’s happening in the world.”

Kimberley Brown is a freelance journalist based in Latin America.