In “She Unnames Them,” her 1985 New Yorker short story, Ursula K. Le Guin reimagines a radical Genesis: “The insects parted with their names in vast clouds and swarms of ephemeral syllables buzzing and stinging and humming and flitting and crawling and tunnelling away.” As an act of feminist rebellion, the story’s nameless yet recognizable heroine dissolves the “Linnaean qualifiers that had trailed along behind them for two hundred years like tin cans tied to a tail.” That impulse is not shared by Stephen B. Heard, a biologist at the University of New Brunswick and a devotee and defender of Latin names. “They’re long, they’re unmemorable and unpronounceable, and they’re at best a necessary evil that biology students memorize as some kind of scientific hazing ritual,” he writes in Charles Darwin’s Barnacle and David Bowie’s Spider. “Everyone knows this. But everyone is wrong.”

Heard is an evangelist, and in this book, he hopes to earn converts for the Linnaean system. To his credit, he mostly avoids the listless lists that taxonomy is derided for. He has instead assembled a scintillating menagerie of life, from South American mosses and spiders in Madagascar to the coelacanth, a rare and legendary fish. Rather than focus on the species themselves, he spins tales about how each acquired its eponym. Even the titular organisms — Regioscalpellum darwini and Heteropoda davidbowie — receive little more than brief descriptions. We linger not on them but rather on the events and often the celebrity that led to their christenings.

This is by design. Darwin’s Barnacle and David Bowie’s Spider is a book about how we speak of nature, not about the natural world itself. What Heard implies but does not say outright is that the act of bestowing anthropoid appellations upon animals and plants complicates an already blurry demarcation between Homo sapiens and the rest of the living world. To anoint a barnacle as “Darwin’s” or a spider as “Bowie’s” is to bind a human’s story to that of the organism. Thus, in many names we can read the social history of natural history.

Today, discovering a new species rarely requires an adventure through the jungle. Findings more often happen in the dusty collections of museum storage, after the careful inspection of an existing specimen reveals minute differences that distinguish it from all species already identified. 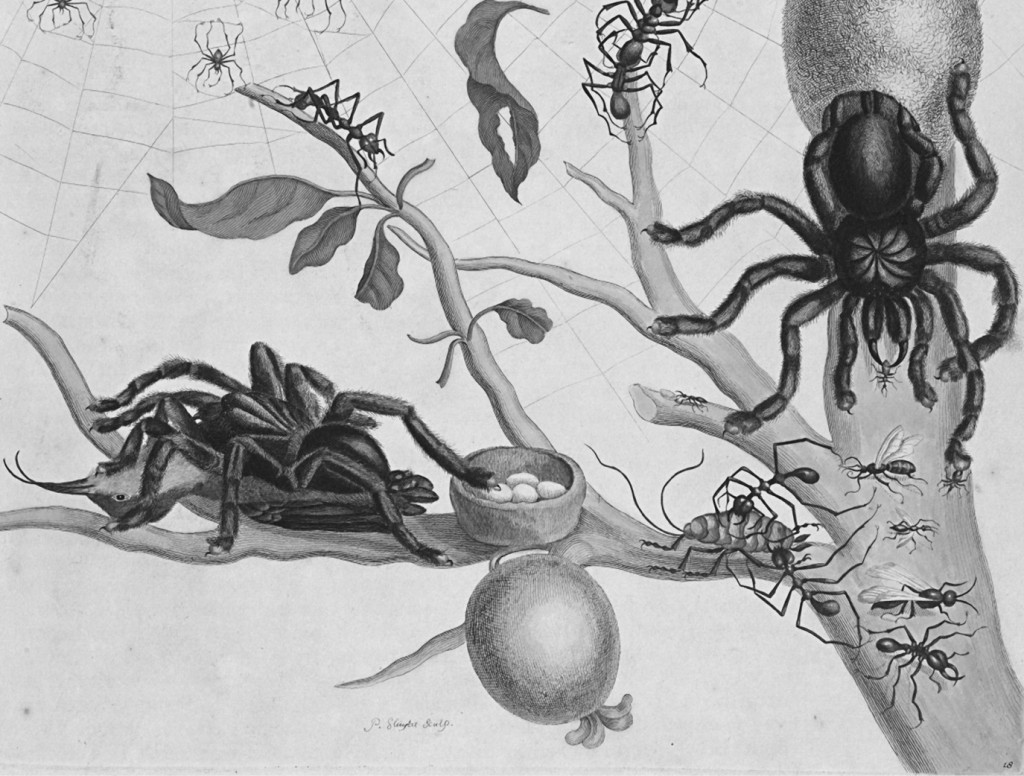 But not too long ago, species discovery was dominated by swashbuckling Europeans who made their way through remote jungles. Some, like Darwin and his contemporary Alfred Russel Wallace, have hundreds of species named in their honour. Heard also recounts those who were less likely to have such a rarefied place in science, like a young French botanist who suffered religious discrimination as a Protestant in seventeenth-­century France. The legacy of Pierre Magnol is entwined with the trees that bear his surname: Magnolia.

Much of the book deals with the long history of sexism and racism reflected in the exclusion and omission of women and Indigenous peoples from the scientific project. A century and a half before Darwin left Plymouth on HMS Beagle, in December 1831, Maria Sibylla Merian left German high society for Suriname, where her research on insects would revolutionize natural history. Her detailed illustrations of life in South America challenged European preconceptions: a tarantula could never eat a bird, some said. But her legacy languished for centuries, and, until recently, few critters roamed the rainforest with Merian monikers. Two Indigenous women — Isabella Aiona Abbott, the first Hawai‘ian woman to earn a PhD in science, and Berthe Rakotosamimanana, a prominent Malagasy primatologist — did ­manage to earn their place in the eponym pantheon, with numerous species of Abbottella algae and Madame Berthe’s mouse lemur (Microcebus berthae) joining those spiders named after rock stars.

Not every name holds a clear social ­lesson. In the nineteenth century, colonial ambitions were thwarted at many turns by malaria. Combatting the disease became necessary, and the only known cure — taught to Europeans by Indigenous peoples in Ecuador — was found in the bark of Cinchona, a flowering tree that lived on the remote slopes of the Andes. So the English botanist Richard Spruce made the arduous journey to collect specimens of Cinchona succirubra (now C. pubescens) and shipped them to India, thereby saving millions of lives and further cementing English rule. Heard asks us to consider whether this was an act of “humanitarianism, colonialism, or biopiracy.”

Spruce, for his part, cared little about Cinchona. “When they are beaten to pulp or powder in the apothecary’s mortar they lose most of their interest for me,” he wrote. His passion — as seen in the dedication to his 600-page monograph — was for liverworts. He revelled in the small mossy plants, because they were “useful to, and beautiful in, themselves — surely the primary motive for every individual existence.”

Not every name holds a clear social lesson.

Passion has been the source of many names. Numerous species honour wives (husbands, much less so) and lovers (requited and unrequited). Scientists’ love of literature has also proven useful: the Sorting Hat from Harry Potter led to the hat-­shaped spider Eriovixia gryffindori, while a catfish in Brazil (Ituglanis macunaima) swims around not knowing it’s styled after Macunaíma, the Brazilian writer Mário de Andrade’s modernist epic. Even Linnaeus himself drew heavily from Greek mythology.

Not all honorifics are in nearly as good taste. Take, for instance, Scaptia beyonceae and Neo­palpa donaldtrumpi, two insects named for their respective celebrity resemblances. Are such handles gauche or wrong or simply for the good of the cause — getting a recently discovered species some tweet-­worthy attention? Other scientific names have been, quite literally, sold off for a few thousand dollars in order to supplement research funds. Heard does not spend long considering the objections about mixing nature and capitalism, but he does drill down to an essential question: “How is it that the science of species discovery is so poorly funded that its practitioners find it easier to auction off a name than to secure grant funding to conduct their research?”

Heard is somewhat less incisive in “The Name of Evil,” a chapter on animals and plants connected to terrible people, where he concludes that “it may not be such a bad thing to have some species named for people of ­questionable virtue.” The alternative, as he puts it, “is to ­divide the set of people for whom species might be named into a subset of unambiguously good people (worthy of eponymous immortalization) and another subset of unambiguously bad ones.” We can even learn something from Anophthalmus hitleri, he suggests, because “we should never forget” that the decision to name a bug after Hitler could be made in the first place. Wading into the culture wars is a dangerous endeavour, and in a book that’s otherwise socially conscious, Heard is not particularly careful here.

Hitler aside, as Heard’s subtitle points out, eponymous names often celebrate scoundrels. But the specific practice of insult naming, which he addresses in another chapter, “just doesn’t seem likely to be that effective.” The rogue is “more likely to be pleased than insulted.”

After she has released the animals from their semantic strictures, Le Guin’s anonymized Eve observes that “they seemed far closer than when their names had stood between myself and them like a clear barrier.” Divisions between the animals — now simply “them”— have melted away too. “The hunter could not be told from the hunted, nor the eater from the food.” Leaving the Garden, she knows that it would be hard to explain all that she has unnamed.

Eve’s rebellion against the patriarchal power of labels reminds us that christening can be an act of ownership. Yes, the cartoonist Gary Larson could say, “It’s my louse!” But it’s also difficult to imagine the creator of The Far Side crowing about his dominion over Strigiphilus garylarsoni. So perhaps eponyms are not always conquest qua conquest, even if they have that potential.

“Naming,” Heard writes, “gives us comfort with the existence of Earth’s species and allows us to make progress thinking about them.” He cites Biblical ontology and Le Guin’s own Earthsea Cycle as examples of this nominal impulse. And while he does not explicitly stake a claim about how the practice affects our relationship with nature, he fills his book with human stories that intertwine with the natural world — what Darwin once called the “entangled bank” of interspecies dependence and shared evolutionary history.