Beyond the Trees: A Journey Alone across Canada’s Arctic

Three years ago, in late spring, Adam Shoalts started walking eastward from an isolated truck stop in northern Yukon, alone. After a few days’ hiking, he launched a canoe and kept going until reaching Baker Lake, Nunavut’s sole inland community, four months and 4,000 kilometres later. On the way, the adventurer from Ontario travelled over mountains, along (and often up) wild rivers, and across icy lakes. He waded through cold, rushing waters where a misstep could spell disaster. On occasion, “screaming gales” pinned him on shore, forcing him to wait out precious days before the first snows would start falling in September. He was in a race against winter.

Shoalts’s route was patched together with the help of topographic maps, satellite images, and a few old reports he’d found in libraries in southern Canada. It carried him through the Richardson Mountains to meet the Deh Cho, or Mackenzie River, at Tsiigehtchic. He paddled south from there, going several hundred kilometres along muddy banks to the fly‑in community of Fort Good Hope, where he turned east up a smaller tributary. By July, he had navigated the ice-­choked waters of Great Bear Lake to reach a network of rivers and lakes that carried him thousands of kilometres farther east across the Barrens. Along the way, he passed two communities, a fly‑in mine, and some remote fishing camps. He traversed Gwich’in, Dene, Inuvialuit, and Inuit lands, yet he saw few people the entire time: some boaters on the Deh Cho, three paddling groups on the Coppermine River, a few fly fishermen, and two bush pilots. On paper, his route was ambitious; on the ground, it was foolhardy.

Shoalts, who was in his early thirties, had designed a modern take on the 1967 Canadian Voyageur Canoe Pageant. That 104‑day race, from Rocky Mountain House, Alberta, to Mon­treal, was a Centennial celebration that drew significant media attention. Anticipating similar excitement (and funding opportunities) at Canada’s Sesquicentennial, Shoalts wanted to take the concept of a cross-­continental paddle north. He pitched his journey as a recorded first, and one significantly more challenging than its 1967 predecessor. 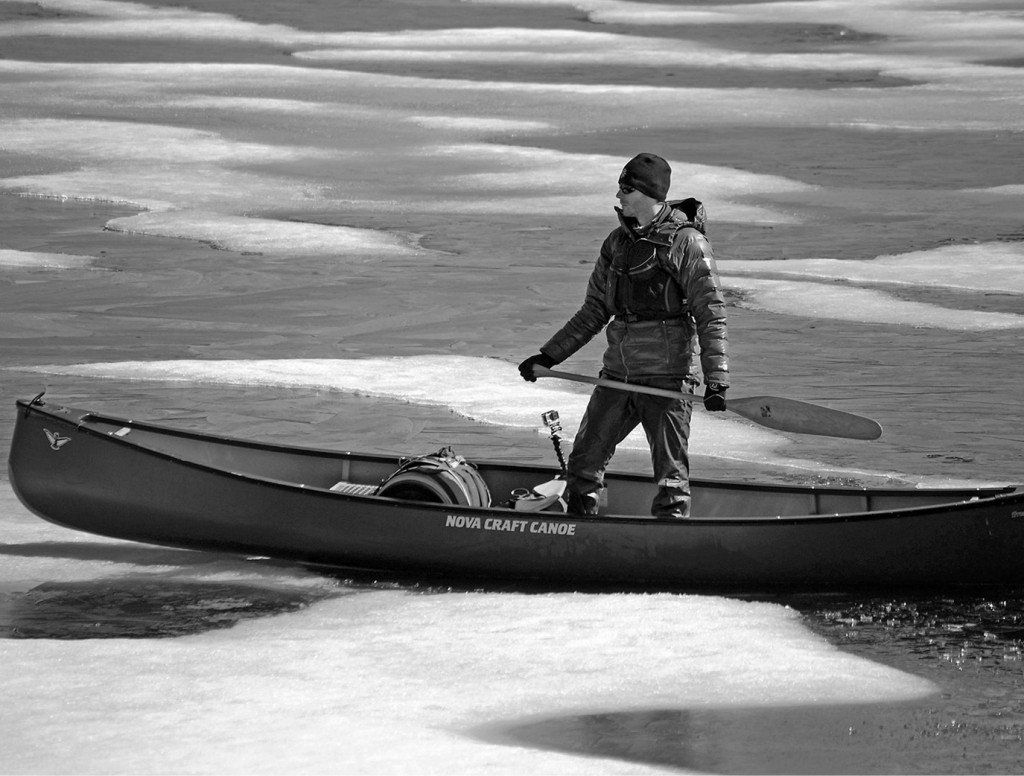 Setting forth with a big dream and a blinkered map.
Image by Penguin Canada

This was not Shoalts’s first hare-­brained adventure. In his account of the journey, Beyond the Trees, he writes of childhood summers spent camping for months on end, paddling through Ontario’s Shield country, running rapids, crossing gusty lakes, and building his skills. He continued paddling as he grew older, taking on increasingly remote, well-publicized, and, at times, controversial trips between graduating from Brock University with top honours and earning a doctorate in history from McMaster. In 2013, for example, he claimed to have “discovered” new waterfalls on the Again River, which runs through Moose Cree traditional territory in the Hudson Bay Lowlands. At the time, the falls weren’t on government maps, but they had been noted in an earlier oral history project about the region and were known to some locals, whom Shoalts hadn’t consulted before his trip. Only by disregarding traditional knowledge — and later insisting that landmarks hadn’t been discovered unless they appeared on government maps — could he claim that “true exploration wasn’t dead.” That journey led to his first bestselling book, Alone against the North, published in 2015. Since then, he’s been hailed as a “twenty-first-century explorer,” by the astronaut Chris Hadfield, and as “Canada’s Indiana Jones,” by the Toronto Star.

Shoalts spent the next two years pulling together enough funding to complete his transcontinental paddle. And when he headed out on May 28, 2017, he did so with a big dream and the blessing of the Royal Canadian Geographical Society.

If Shoalts’s journey was an impressive record-­setting feat, the story he tells about it is not. Generations of “explorers,” hailing from southern Canada, Europe, and the United States, have written bestsellers that tread the same well-worn narrative path. In that sense, Beyond the Trees is a classic colonial adventure, brewed from predictable plot lines, perils, and charismatic characters.

The protagonist of such adventures — typically a white man and self-­styled explorer — departs on a quest into the unknown North. The canoe tends to be his vehicle, both a practical and a symbolic choice. As he struggles to overcome a landscape that he portrays as harsh and timeless, readers wonder if the explorer can push his way up wild rivers, survive summertime snowstorms, and avoid nasty encounters with megafauna and mosquitoes. The threat of failure — by way of injury, starvation, crushing loneliness, insanity — is constant. By surviving, and eventually thriving in the wilderness, the hero emerges as almost Indigenous. He becomes an expert, imbued with the soul of the North’s sparse mysticism, who can bring it south to feed a market of armchair travellers.

In periods of upheaval, we yearn for alternative realities.

Until the early twentieth century, this arc was explicitly imperialist. Take accounts of John Franklin’s three-year Coppermine Expedition: In 1819, Franklin, George Back, John Richardson, and nineteen others sought the Northwest Passage in a bid to expand Britain’s global reach. Setting off from Cumberland House, they headed overland to the Coppermine River, which they followed through the Barrens to the Arctic Ocean before turning back south in a desperate trek to the nearest fur trading post. The expedition was a disaster — half the group perished, and the survivors needed to be rescued by members of the Yellowknives Dene — yet Franklin was lionized in Britain. And, naturally, he wrote about it, publishing Narrative of a Journey to the Shores of the Polar Sea in 1823.

The tone of bestselling expeditionary accounts started to change around the 1930s. The British Empire was disintegrating, and Canada was establishing a more robust presence in the North, pushing the development of mines and regular transportation links and forcing Indigenous people into permanent settlements and residential schools. Bush planes and aerial surveys were becoming commonplace. The blank spaces that once covered maps of the region were filling in. Each year, explorers had less and less “virgin territory” to discover — a tale that Shoalts summarizes in his 2018 book, A History of Canada in Ten Maps: Epic Stories of Charting a Mysterious Land. Meanwhile, people in the south were flocking to cities. A professional class started to emerge, as did concerns about the negative impact of urban life on health and moral character. In response, many writers took to the hills, flocking to curated wildernesses like Banff, Jasper, and Temagami, where they helped cultivate a national identity in the North.

Journeys stopped being explicitly about conquest; instead, explorers sought purity and transformation in the wilderness and the possibility of a nominally peaceful colonialism. Communing with the land for the length of a canoe trip was a balm to take the edge off hard truths. Household names — from Archibald Belaney, or Grey Owl, to Bill Mason and Pierre Trudeau — reassured city dwellers that our wild soul was pure and remained intact. Their North was a pre-­modern mirage, which obscured the political, social, and economic decisions that were reshaping the region and planet.

A mirage can offer solace — the comfort of nostalgia for a timeless past. Beyond the Trees is appealing because of the simplicity with which Shoalts frames his story: the coming and going of winter, not complex issues like reconciliation and climate change, gives temporal dimension to his journey.

In periods of upheaval, we yearn for alternative realities. And that nostalgic yearning is what Bernd Brunner captures in Winterlust: Finding Beauty in the Fiercest Season. Part essay collection, part coffee-table book, the German author’s elegant meditation is a cabinet of curiosities. It’s meant to be picked up and opened at random; each page holds a collection of tales drawn from around the world, meteorological facts about the season, and tidbits of hibernal history. We can almost smell and hear winter through the page. The volume of the sound of falling snow (20 decibels, less than a whisper) sits alongside a description of oceanic icicles — bubbles of super-­cooled brine that sink beneath the sea ice and, upon hitting the sea floor, explode and freeze everything in the vicinity. Goethe’s nineteenth-­century quest for inner discovery and renewal in the Alps is found beside a reflection on the Group of Seven’s quest for a nation’s soul. Brunner offers a reprieve from the darkness and cold that often define the season. He conjures the dream of winter — not winter itself.

As meditations on winter and tales of Arctic exploration, both Winterlust and Beyond the Trees are doorways. Shoalts gives us the candy-­cane buzz of a classic adventure tale. Brunner presents a literary snow globe — one that’s suspended in time and space. Both books offer a brand of escapism we might acutely crave, especially during periods of isolation.

Still, we can’t escape forever. The explorer tale was integral to justifying the colonization of a region long portrayed as inhospitable, barren, and open for the taking. Shoalts continues this trend, flattening the region’s complex political, economic, and cultural topography into a two-­dimensional story that lacks depth. (Kings of the Yukon, which describes a northern river trip by another white paddler, Adam Weymouth, presents the region with accuracy, humanity, and humility. The contrast with that book, from 2018, is remarkable.)

The North is complicated: spaces are vast and might appear empty at first blush, yet they are animated by complex interactions between cultures, governments, companies, and individuals. Nowhere is unknown, nowhere is blank, and nowhere is timeless. Climate change, a thoroughly modern and human process, is rapidly transforming the region. Winter, a more socially, culturally, and politically charged season than either Shoalts or Brunner lets on, is particularly impacted by the crisis. We need moments of escape, but we can’t forget reality.

Marc Fawcett-Atkinson studied journalism at the University of British Columbia and now works in environmental communications.