Afew days after Germany and the Soviet Union concluded their cynical pact in August 1939, which preceded the Nazi invasion of Poland, the Royal Canadian Mounted Police presented the Department of Justice with its plan for “suppressing subversive activities” at the outbreak of war. The RCMP proposed that Canada outlaw all Nazi, Fascist, and Communist organizations; ban all foreign-­language political organizations of Fascist or Communist affiliation; and suppress the English-­language Communist press, along with the Nazi, Fascist, and Communist foreign press. The Mounties also proposed to seize the assets and records of such organizations, including records kept in consular archives.

The RCMP proposal upset Norman Robertson, the senior External Affairs official who had been his department’s representative on the various committees that had been desultorily readying Canada for war. “I was appalled,” Robertson wrote to Oscar Skelton, the undersecretary of state. The plan would cause “bitter inter-racial resentment and the prospect of endless labour troubles,” and would drive organizations underground. “The Police should concentrate on their plans for the immediate arrest of persons suspected of treasonable activity.” Those procedures had been readied for a year.

When Robertson met with RCMP and Justice Department officials a few days later, the police argued “that the Communists are of far more importance than either the Italians or Germans in the event of war.” Pressed by Robertson, the group decided to leave the Communists alone for the moment and do nothing about Fascists — for fear of violating Italy’s neutrality. Instead, they would review the Nazi supporters to be arrested. The RCMP had produced a list of 641 names, 90 percent of them landed immigrants and only sixty-­five Canadian citizens. On September 3, the day Britain declared war, and a week before Canada followed suit, the list had been whittled down to 265 German nationals and sixty naturalized Canadians. These men were arrested under the authority of the Defence of Canada Regulations, put into force under the sweeping powers of the War Measures Act. The DOCR gave the justice minister the right to intern “any particular person” who might be “acting in any manner prejudicial to the public safety or the safety of the State.” 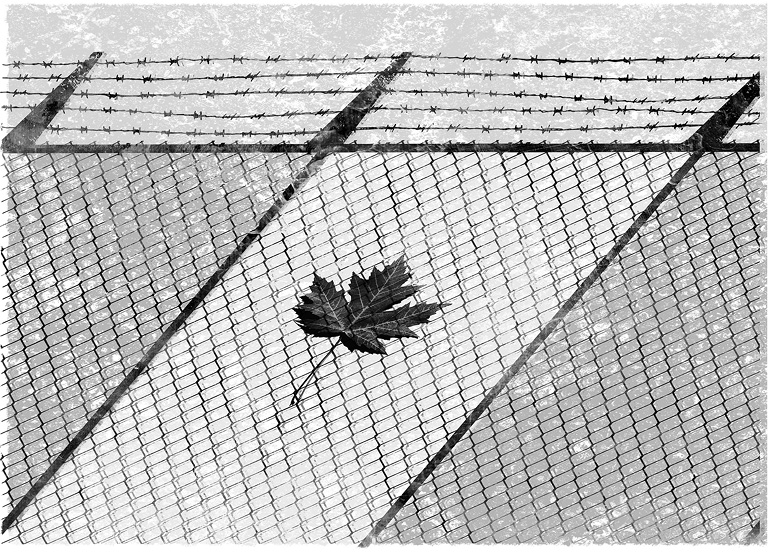 This country’s failures of internment.
Image by Dushan Milic

Robertson had vetted the list himself. In a letter to Walter Tucker, a Liberal MP from Saskatchewan, he noted that “too many naturalized Canadians of German origin have put themselves in an awkward and embarrassing position by their active participation, in peacetime, in Nazi and Nazi-­controlled political and social organizations.” Many likely joined those groups, he went on, “in good faith without appreciating the strain which other people might think membership put on their loyalty to Canada.”

That was the critical point. Robertson believed that Canada had failed to integrate ethnic Canadians of German origin — as well as those of Italian and Japanese origin — whose activities looked very different once war had been declared. As he wrote a few months later, many German Canadians had been surprised to be arrested: “It had never been put to them clearly and unequivocally, at the time of their naturalization or afterwards, that continued membership in organizations under foreign control was incompatible with the loyalty they had promised to Canada.”

Nonetheless, by January 1941, Canada had interned 763 persons of German origin and 586 Italians (after appeals, it had released 127 of the former and 105 of the latter). Once the fall of France left Germany in control of Western Europe, Canada locked up eighty-­seven Communists and twenty-­eight domestic Fascists, members of the National Unity Party. When Japan entered the war in December 1941, some 700 Japanese Canadians were also interned, some because they were active supporters of the empire, others because they had protested and demonstrated too forcefully against the evacuation of all persons of Japanese origin, citizens or not, to the British Columbia interior.

These internments — and the internment of almost 6,000 Ukrainian Canadians in the First World War — have generated much public discussion, multiple government apologies, and a substantial scholarly literature. What too few of those studies do, however, is remember that Canada was on the losing side of war in the early 1940s and had the right to defend itself against internal enemies.

The internment process was far from perfect, of course. The RCMP, with its pre-war fixation on Communists and its almost total neglect of domestic Nazis and Fascists, was utterly incompetent. And when the Mounties did try to locate supporters of Hitler and Mussolini, they sometimes turned to informants with dubious motives. Italian Canadians were especially hard done by. But, to their credit, Robertson and others insisted that Canada institute an appeal process, and many of those initially interned were in fact released.

Regrettably, most of the writers in Civilian Internment in Canada, edited by Rhonda L. Hinther of Brandon University and Jim Mochoruk of the University of North Dakota, do not adequately define “internment,” a term that carries great emotive power. The usual definition places internees behind barbed wire and under armed guard. The 700 or so Japanese Canadian internees, most held at the Angler Camp in northern Ontario, were under guard; the active supporters of Japan among them certainly met the definition laid out in the Defence of Canada Regulations of “acting in any manner prejudicial to the public safety or the safety of the State.” Perhaps those who protested the forced evacuations should not have been locked up, but in a feverish atmosphere they were also deemed to have fallen afoul of the DOCR. Interned groups had a “protecting power,” a neutral country that was charged by an international agreement to ensure their treatment met adequate standards (Spain, in the case of the interned Japanese Canadians). And it did. Even one of the critical essays in this volume concedes “the generally positive conditions of internment in Canada in regard to living quarters, nutrition, hygiene, medical care, and the like.”

But it is important to point out that the evacuation of 22,000 Japanese Canadians from the B.C. coast to the interior was not internment. Rather, those Canadians were victims of a wartime panic and long-standing, deep-rooted racism. Imperial Japan was running unchecked in the Pacific in late 1941 and early 1942, and many on the West Coast, including provincial and federal politicians and the senior military officers, were calling for action.

Officials separated from their families most of the fit Japanese Canadian men who were moved inland and put them to work in the forests or building roads. The rest were sent to hurriedly erected townsites or to small communities with vacant housing, usually not in good condition. Some towns greeted the influx of the evacuees as an economic boost. Other evacuees chose to go to sugar beet farms in Manitoba and Alberta, where some Japanese Canadians had been farming before the war. The work was extremely hard and the economic returns usually small, but this was not internment. Evacuees could also move further east with the permission of the British Columbia Security Commission. Internees had no such option. But today this distinction is usually forgotten.

Without a doubt, the vast majority of Japanese Canadians were treated harshly and unjustly during the Second World War. Despite the misuse of the word in almost all writing on the subject, however, they were not “interned.” In many ways, Civilian Internment in Canada completely wrenches the word out of shape.

Hinther writes about Gladys MacDonald, an activist with the Regina Communist Party. She was jailed from 1940 to 1942, and that might have been wrong. But it was not internment. Mochoruk focuses his essay on a Communist-­run dairy and co‑op chain in Manitoba that suffered “collateral damage” when the party was banned in June 1940. Again, that was not internment by any meaning of the word.

With the co-editors stretching the definition to the breaking point, it is no surprise that many of the other contributions to this volume wander off topic. One looks critically at German merchant seamen, hardly normal civilian internees, held in Canada. Other essays focus on German Jewish refugees in Britain, swept up in London’s wartime panic and sent to the Dominion for incarceration as enemy aliens; one considers same-sex desire among them. The phrase “informal internment”— whatever that might be — is used to describe Japanese Canadian sugar beet farmers. In these twenty essays, interpretations of internment spin completely out of control.

Such looseness of terms matters in the context of the Charter of Rights and Freedoms. Canadians believe in their civil rights, as they should; they often want to apply those beliefs retroactively, as they should not. Pierre Trudeau, we might remember, refused to offer apologies and redress for the state’s past errors, much preferring that Canadians try to do better in the future. But with Trudeau out of office, the Japanese Canadian community won an apology from the Mulroney government and monetary compensation in 1988. Two years later, Italian Canadians received an apology, without financial compensation, for the “brutal injustice” they had suffered. Ukrainian Canadians similarly worked to get recognition for their Great War internment, though not an apology. And in 2008, the Harper government created a $10-­million fund to support commemorative and educational work about internment.

Only German Canadians and Communists have yet to receive an apology for their internment in the two world wars. The public generally agrees with making amends and offering redress, but it might not look favourably upon an apology to Communists and Nazis.

It would be somewhat more difficult for Ottawa to contemplate internment in the future, no matter the circumstances. That’s because the Mulroney government, in 1988, scrapped the War Measures Act, passed into law in August 1914, and replaced it with the Emergencies Act:

Nothing in this Act shall be construed or applied so as to confer on the Governor in Council the power to make orders or regulations . . . providing for the detention, imprisonment or internment of Canadian citizens or permanent residents . . . on the basis of race, national or ethnic origin, colour, religion, sex, age or mental or physical disability.

But does Canada yet work to integrate its immigrant communities, as Norman Robertson urged in the late 1930s? To cite only one example: During the breakup of Yugoslavia in the 1990s, Canadian Serbs and Croats fought each other on Toronto street corners and raised funds for their warring relatives in the old country. One Canadian businessman, Gojko Šušak, even became the Croatian defence minister, a proponent of ethnic cleansing, and an undoubted war criminal. Here this country definitely failed to make its immigrants into Canadians.

More recently, a newly powerful and aggressive China has raised concerns in the West and throughout Asia, and Beijing has already spread its tentacles widely among the more than a million Chinese Canadians. To update Robertson’s note from eighty years ago, “Too many naturalized Canadians of Chinese origin have put themselves in an awkward and embarrassing position by their active participation, in peacetime, in Beijing-controlled political and social organizations.” We must hope fervently that no Canadian government will ever again intern any of its citizens, but the world remains a dangerous place, and anti-­democratic forces are gaining strength.

While reading J. L. Granatstein’s review of Civilian Internment in Canada, I was struck by his repetitive insistence that “it is important to point out that the evacuation of 22,000 Japanese Canadians from the B.C. coast to the interior was not internment.” Granatstein does not deny in the least that “the vast majority of Japanese Canadians were treated harshly and unjustly during the Second World War.” However, for some reason, some finely honed semantic measurement perhaps, he takes umbrage at the book’s use of the term “internment.”

I have to wonder if the thousands of Japanese Canadians who were mercilessly vilified and then rounded up in a fury of racial fear...