Deciding to move apartments is one of the last privileges a Toronto renter has. Changing neighbours is almost like a freebie holiday: you get all the perks of being a tourist (freedom, anonymity, rejuvenation) and none of the disadvantages of being a foreigner (getting lost, not speaking English, being confused by the archaic transit system). It’s like you’re a kid again: coming upon an abandoned red-brick warehouse in the next neighbourhood is on par with unearthing pirate treasure. Until, of course, you find an even more amazing gem in the next-next neighbourhood over.

You get that sense of discovery while reading Toronto’s Lost Villages, Ron Brown’s recently expanded eulogy for neighbourhoods destroyed or altered beyond recognition by a citizenry that was — and in many ways still is — in its infancy. Like a family photo album, this is not a book you should feel obliged to read cover to cover. There’s no consistent narrative thrust. The pages are dense by intention, peppered with musings both sentimental and forlorn, with loving chronicles of virtually every Hogtown haunt ever vanished, from the suburbs of Mississauga and Vaughan to downtown and the Toronto Islands. It’s a book that’s best consumed over an extended period, a time machine for revisiting your favourite area, or perhaps a companion to bring on long walks through parts unknown.

Brown, a geographer and travel writer, won a Heritage Toronto Award in 1997 for the first edition of this book. It’s full of welcome details and historic observations, like Lady Simcoe’s descriptions of “fallen logs in swampy spots” along Yonge Street. And he clearly has love for Toronto, as the short essays that precede his more textbook-like chapters show. But accounts of how the city came to be as it is, for better or worse, are mostly missing from Toronto’s Lost Villages. Even with a rousing, writerly voice, Brown generally fails to explain why historic neighbourhoods are worth mourning in the first place, and what we’ve lost as a society by failing to save them. 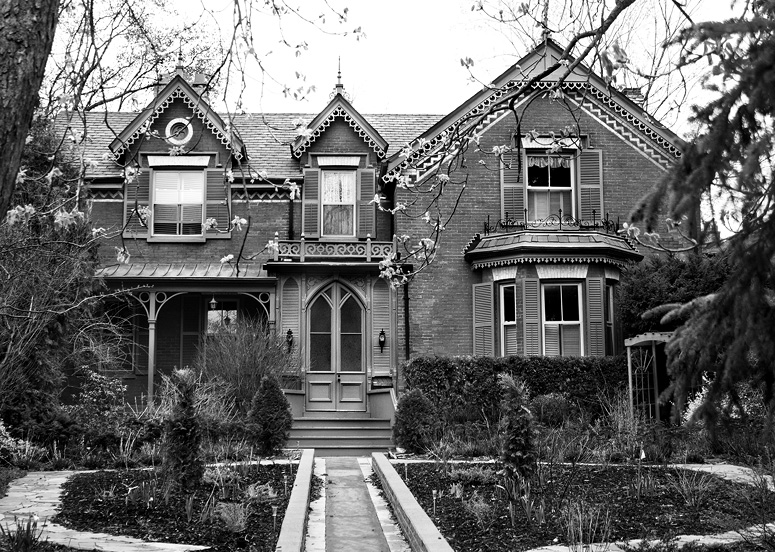 A mournful potpourri of Toronto’s past.
Image by BIlly Wilson, the Lamb House, 2011; Flickr

The opening chapters illustrate Brown’s broad ambition and flair for romance. He begins with the “List of the Lost,” a directory of long-gone neighbourhoods that reads like a memorial for dead soldiers. About a third of the entries are marked with an asterisk, indicating “little or nothing left to see.” Moving to the meat of the book, Brown paints the picture of Toronto’s ancient past, when “human activity began with the retreat of the glaciers roughly twenty thousand years ago.” It’s an audacious stroke, like Stanley Kubrick choosing to open 2001: A Space Odyssey with prehistoric apes using proto-tools to bludgeon their prey and each other. In fact, all of the book’s early moments are grim, striving, and challenging. These are all good things.

The strongest bits in the remaining chapters conjure a wonderful nostalgia for old Toronto and its surrounding municipalities — and, ironically or not, reinforce how the city’s conservative approaches to economics and aesthetics remain in place today. Brown really makes you detest the powers that were for destroying villages that, if still standing, would surely dispel the myth that Toronto is devoid of nature (thanks, Vancouver) as well as ugly and architecturally derivative (merci, Montreal). For Torontonians who actually love Toronto, there are a lot of savoury snacks here: accounts of Etobicoke’s Long Branch district as a Victorian-era cottage getaway (complete with an amusement park resembling that of Coney Island); the fact that Danforth Avenue, the blacktop spine of current Greektown, is named after an American road maker who left Canada out of disgust for his patrons; and the portrait of early Scarborough as one of Ontario’s best farming areas, rich with “fields of hay and grain” and cattle grazing “lazily in lush green pastures” (pastures that are now home to more than 650,000 people). For Toronto devotees, this seems like the city we should reclaim or, at least, the one that our children should be studying in school.

“For Torontonians who actually love Toronto, there are a lot of savoury snacks here.”

Throughout Toronto’s Lost Villages, there are biting metaphors for the contemporary city, though Brown prefers to mask them somewhat. He points to 1850s rich folk donating land for public train stations (of the two dozen built, only four remain) as a ploy to raise the value of their already valuable properties — sounds familiar. Later, Brown explains that Scarborough initially had problems attracting settlers, thanks to a lack of public transportation. Scarborough is still grossly lacking transit options, of course, an injustice that has fuelled deep resentment toward the “downtown elite” and helped give rise to neo-liberal populists like Rob and Doug Ford.

If you live in Toronto and care about heritage, you know that Brown is mildly shaking a fist at today’s leadership with such historic parallels. “Sadly,” he writes, “rich history has been obliterated by those who put profits first, or who perhaps were just never fully aware of the heritage they were destroying.” Given the news that the Gladstone Hotel — a preservation champion and arts haven in the West End — was recently bought by a condo developer, you can only hope that Brown will once again unleash his raging pen in still other updates of Toronto’s Lost Villages.

Brown’s grumpy, righteous digs are compelling and often funny, but this strength only exposes what the book is lacking — namely, even more grumpy, righteous digging. Because Brown is so concerned with detail, so dedicated to doing right by his lost villages, he misses the chance to tell a more emotional story, a shame considering his opinions are so clearly bolstered by matchless background information. Brown has done a fine job of cataloguing the city’s untold history, but Torontonians who align with him ethically would be better educated (and entertained) by a lively harangue — something more akin to Howard Zinn’s A People’s History of the United States. That may sound like a reach, but Toronto is a relatively young polity longing for a proud history.

Take Brown’s assessment of Osgoode Hall, one of the Big Smoke’s most cherished buildings, right in the downtown core. “When built in 1832, it stood majestically at the head of a country lane that is now called York Street,” he writes. “The magnificent structure is a welcome relief amid the architectural tedium that now dominates University Avenue.” That last sentence is a pesky little one-off that deserves more discussion; tedium always warrants some sort of roasting. But Brown just stops there, moving on to descriptions of Lakeshore Road in 1791. He describes Toronto’s current physical state as “sad” and “unfortunate.” The problem is that passing remarks tend to get . . . well, passed over when sandwiched by layers and layers of pure fact. Brown should be more expressive and attack the foes he’s laid out in the text. He — and his audience — would have more fun that way.

In some cases, Brown’s nostalgia has blinded him to the virtues of contemporary Toronto, particularly in Etobicoke and Scarborough. People living in these parts of town would be forgiven for accusing him of lacking awareness. Yes, good on Brown for praising the suburbs of old, an approach that rarely makes it into the work of today’s travel writers and media personalities. But his characterization is simplistic: he blames the creation of condos, box stores, and monster homes for eradicating precious heritage sites, while ignoring the fact that most suburban residents demanded these things be built. He also fails to properly acknowledge that Toronto’s unique diversity has made the suburbs more interesting, in many ways, than downtown, especially when it comes to the culinary scene and post-war architecture. In this way, he’s quite unlike Suresh Doss and Shawn Micallef, two celebrated writers who have forced downtowners to rethink their definitions of cool. The former has earned an international audience for showcasing the world-class ethnic cuisine that can be found only in the pastiche strip malls of Brown’s nightmares. The latter — someone who might love Toronto even more than Brown — suggests that modern and postmodern suburban architecture is both beautiful and a pillar of Canadian identity.

Although an Anglo-Protestant culture dominated Toronto’s past, it does not dominate the design, taste, and ideals of today. Brown’s case against new developments remains valid. Still, to borrow his own phrasing, he may not be fully aware of the heritage they are “creating” in the suburbs.

That’s not to say that Toronto’s Lost Villages is anti-progressive. In addressing the TTC’s construction of Islington Station in the 1960s, Brown acknowledges that while most of the area’s original charm had been stifled and evaporated, the new subway brought with it “improved access to the city.” This meant that “commuters began to demand rental housing, and they got it. Apartment and condominium towers began to pierce the sky.” It’s a tacit admission that destroying history for essential infrastructure can propel municipalities into new strata of socio-economic excellence. But Brown would surely deem the trend “unfortunate.”

Still, Brown has written a book of great service. And even the quarrels readers will have with some of his ideas probably mean he’s already won. That is to say, Brown’s economy of opinion, by its very nature, ends up stirring heated debate. For what is a Torontonian if not a tolerant complainer — a passionate asshole who regularly takes his or her city to task but absolutely refuses to leave?

Toronto’s Lost Villages is a compendious buffet of civic history. You flip pages, picking which ghost community you want to inhabit, just as a renter chooses which surviving neighbourhood to live in next. Then you move on to another one when your itch for exploration — and your love of your city — become too strong to resist.