In A Mark of Wholesome Meat, a short 1964 film produced by the U.S. Department of Agriculture, we watch how millions of animals — cattle, sheep, pigs — journey from farms and ranches to slaughterhouses and onward to lunch boxes, dinner plates, and picnic baskets. Carcasses are rolled into a cooler. Bags of powder are mixed with ground meat (all according to regulation, the unseen narrator assures us). A vendor in a paper hat tosses out wrapped hot dogs at a baseball game. We learn that continued economic growth depends on health, and prepared and processed meat contributes to our well-being. Indeed, meat is “enjoyed by almost everyone, everywhere, every day.”

The editors, Ryan M. Katz-Rosene, of the University of Ottawa, and Sarah J. Martin, of Memorial University, take the position that “there is no singular definition of green meat.” Rather, the sustainability of consuming animal proteins depends on a much larger context, on “people thinking about the social, health, and environmental implications of all their dietary choices — not just those of one or two food groups.” That said, Katz-Rosene and Martin define three pathways to “green meat”: modernizing meat, replacing meat, and restoring meat. 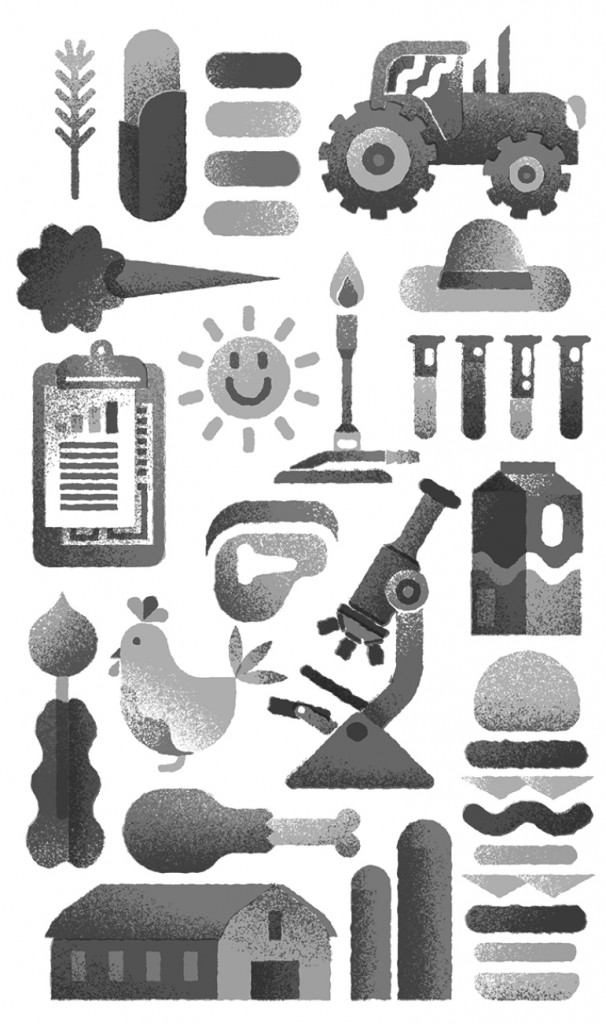 The science and husbandry of “green.”
Image by Alex MacAskill

The first pathway relies on new technologies and intensification of production to improve agricultural efficiency. This includes innovations that “reduce the use of water, land, and other inputs, or which recycle previously discarded materials.” For example, “bio-digesters” can capture the methane released from manure “and use this to generate energy.” Animals themselves can become more productive through “advanced hormones and targeted antibiotics” and genetic interventions “to induce multiple births.” Farmers might also do more to “sequence genomes to select for more productive and healthier animals.” In many ways, such technologies simply further existing mechanisms of our industrial system and put additional pressure on the soil.

Similarly, “replacing meat” often includes industrial processes necessary for synthetically produced meat, plant-based proteins, and insect farming. These alternative sources of protein, the theory goes, require less water and land to produce, and so will better meet the nutritional needs (and consumer preferences) of a growing population. However, these options raise concerns about industrial crop production that demands abundant herbicides, pesticides, and irrigation; about diminishing biodiversity; and about not-yet-determined externalities associated with lab meat, which is grown from “animal-derived stem cells” but is not “harvested from a living animal.”

Finally, “restoring meat” means recognizing the roles that animals play in self-sustaining farm ecosystems. If managed in an agro-ecological way, livestock can actually help restore the grasslands that constitute about 40 percent of the planet’s land surface, by reducing soil erosion and improving soil fertility while reducing biodiversity loss, unnecessary water withdrawals, and air and water pollution. Even so, livestock is still meat, and traditional husbandry is not as efficient as industrial agriculture.

In addition to the editors’ introduction, ten essays explore various pathways to green meat. In “Confronting Meatification,” for instance, Tony Weis, of Western University, speaks to the economic, environmental, and health issues associated with the “industrial grain-oilseed-livestock complex.” These include decreased soil health due to monocropping (one-third of crops grown are used for animal feed), methane emissions from wastewater lagoons, and the risk of infectious diseases caused by E. coli, listeria, and other pathogens. Weis argues that “meatification,” or the centring of meat in our diets, both reflects and exacerbates inequality; and that food security depends on reducing the production and consumption of meat within industrial agri-food systems.

In “The Promise and Peril of ‘Cultured Meat,’ ” Lenore Newman, of the University of the Fraser Valley, provides an overview of cellular agriculture: “the production of agricultural products from cell cultures.” Consider that one type of plant-based burger contains leghemoglobin, which is produced through the fermentation of beans, to mimic the “bloody, umami” flavour myoglobin gives meat. “With such excellent plant-based substitutes,” Newman writes, “the question has been asked why we need in vitro meat at all.” And in “The Evidence for Holistic Planned Grazing,” Sheldon Frith, a consultant with the Northern Farm Training Institute, in the Northwest Territories, argues that “holistic planned grazing” practices can improve levels of organic carbon in the soil, as well as water retention and biodiversity. As properly managed cattle, sheep, and goats move across pasture land, they deposit fertilizer, which they work into the soil with their hooves, aerating the top layer of ground. If pigs and chickens follow, they can spread the manure and manage insects. Holistic management goes beyond grazing, however, to integrate “all aspects of planning for social, economic, and environmental considerations.”

Elsewhere, Gwendolyn Blue, of the University of Calgary, describes “a feminist multi-species approach” in which the personal is political as well as epistemological. As such, it would acknowledge interactions among humans and non-human species and consider “geographical, cultural, and historical contexts.” It might include changing farming practices to deter — rather than kill — predators, or could involve the restoration of bison herds. It is an approach, she admits, that “does not lend itself to tidy, elegant slogans such as ‘eat less (or no) meat to save the climate.’ ” In another essay, the University of Manitoba’s Shirley Thompson, Pepper Pritty, and Keshab Thapa explore historic land use in the “foodshed” of Garden Hill First Nation and how the “eco-carnivore” diet enjoyed there is sustainable and reflective of traditional values and culture.

Katz-Rosene and Martin conclude that “green meat” means eating less meat, “particularly within industrialized economies.” Western diets will need to replace more animal-based proteins with non-animal proteins. And a shift is needed to a post-industrial food system that’s “located in community and ecologically grounded production systems.” Ultimately, achieving green meat will require the guidance of NGOs, governments, the market, and “self-governance” within the industry and among consumers. For one thing, truly sustainable meat will mean “that all the edible parts of the animal are eaten, not just the ones that are popular.” North Americans’ preference for chicken breasts, steaks, and ribs “poses significant hurdles for both producers of livestock and processors of meat to overcome in order to find ways to use the whole carcass.” We all have to make some different choices. (So far, I personally have enjoyed bison tongue at Au Pied de Cochon, in Montreal, and roasted marrow at Chez Piggy, in Kingston.)

In Food Justice, from 2010, Robert Gottlieb and Anupama Joshi define a sustainable food movement as one that “seeks to ensure that the benefits and risks of where, what and how food is grown, produced, transported, distributed, accessed and eaten are shared fairly.” For them, justice means a wholesale “transformation of the current food system, including but not limited to eliminating disparities and inequities.” The essays in Green Meat? engage with these issues, which are all the more relevant in 2020.

The pandemic has shown the vulnerability of workers and the risks of corporate concentration. A single plant in Alberta, which was linked to one of the largest outbreaks in Canada, has the capacity to process more than one-third of this country’s beef. It and other facilities that supply beef, chicken, and pork were shut down as workers tested positive (many complained that physical distancing rules were ignored). Moreover, according to the Census of Agriculture, the number of Canadian farms is 193,492, a decrease of almost 6 percent since 2011, as small operations are consolidated into big ones. While this was actually the lowest rate of decline over the past twenty years, the number has been steadily decreasing since at least 1961, when there were 480,900 farms. More land (93.4 million acres, an almost 7 percent increase) is being used for crops, and this can mostly be attributed to changing land use — converting pasture to cropland, for example.

“The pandemic has shown the vulnerability of workers and the risks of corporate concentration.”

We’ve also seen a greater corporate concentration of ag: the number of farms with more than $1 million in revenue increased by 36 percent between 2010 and 2016. As the Council of Canadians has suggested, we have larger farms, heavier chemical use, and weaker prices. Our farms are producing more chickens and pigs, but despite a decrease in overall head of cattle, beef farms remain the second most common type. (Perhaps there are silver linings: the census also showed that the number of farm operators under thirty-five went up for the first time since 1991, and one in eight farms is now selling directly to consumers — everything from fruits, vegetables, and eggs to value-added products like wine and cheese.)

Almost 13 percent of Canadians are food insecure, which means they worry about running out of food, scrimp on quality or quantity, or actually go days without. (There are incredible disparities here: for example, a recent study by the charity FoodShare and the University of Toronto revealed that Black households are almost twice as likely as white households to face food insecurity.) And while Canada finally has a national food policy — meant to address such things as food waste, domestic food production, and food security, especially in northern and remote communities — organizations such as Food Secure Canada and others who advocated for it have been raising concerns about its implementation, even before COVID‑19 made the injustices of our food system so clear.

All this is to say that a lot more than per capita meat consumption has changed since A Mark of Wholesome Meat showed what it took to get the USDA’s “stamp of approval.” Today, industrial agriculture is about so much more than an endless supply of meat patties and cured ham. Like Katz-Rosene, Martin, and their contributors, we all need to ask tough questions about our meat — and everything else on our plates.

Jennifer O’Connor is working on a master’s in social and political thought.