Now eighty-four, Prudence Emery apprenticed at Expo 67, managed public relations for the Savoy Hotel, and became Canada’s longest-serving movie publicist. Nanaimo Girl: A Memoir is her frolicsome recounting of an eventful life as the light behind the stars.

Who arranged for Pierre Elliott Trudeau to go to the London premiere of Funny Girl, where he met and began dating Barbra Streisand? Prudence Emery, of course. Who swapped clothes with Sophia Loren and arranged to take her children out trick-or-treating in Toronto? Pru, that’s who. And you can guess who found a private beach for Paul McCartney and his family in the Bahamas when they were besieged by fans.

“Where are you from?” asked McCartney. “Nanaimo,” said Emery. “I wouldn’t worry about that if I were you,” advised the ex-Beatle. 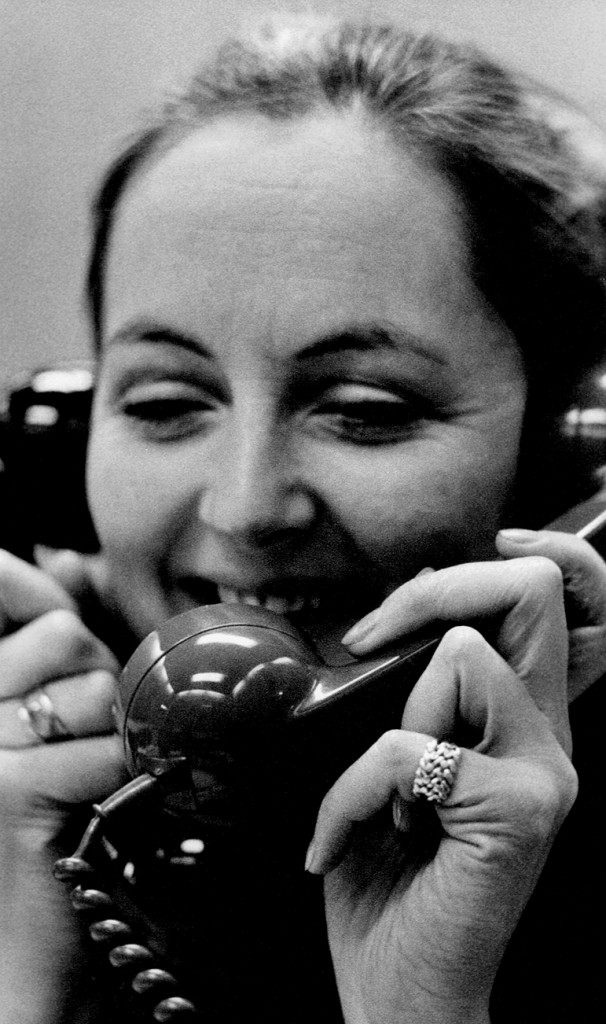 Before they invented extension buttons.
Image by Courtesy of Prudence Emery

On the contrary, Emery sees her connection to Nanaimo, a coal-mining harbour town of 6,000 at the time of her birth in 1936, as the key to her ability to play with the famous. The third-person character of “Nanaimo Girl,” referred to more than thirty times in the book, has long possessed a superpower of staying down-to-earth with anyone: “I grabbed Sir Laurence Olivier by the hand and dragged him through the reception. Was I brash or what! Credit Nanaimo Girl here.”

Brash is only half the story. I met Emery at the launch of David Cronenberg’s sex-and-collision drama, Crash, at the 1996 Cannes Film Festival, where she stood out with her bright red hair and colourful designer clothes like a peacock among the grey journalist pigeons. But she was quietly helpful, with watchful eyes and just the hint of a mischievous smirk. Emery has a mild-wild duality, much like Cronenberg, a filmmaker she worked with ten times. He once said of his favourite publicist, “Pru’s unique. She’s a one‑off. She makes it fun. She plays the eccentric edges and the oblique angles, and that’s a gift.”

The instinct for eccentricity seems to be inherited. Her father, an ophthalmologist, liked to amuse people by walking down the stairs on his hands and impersonating Charlie Chaplin as Hitler in The Great Dictator. Her mother, by contrast, played the piano and arranged elocution and dance lessons for her daughter, before shipping Pru off to an English-style boarding school in Victoria to “learn my manners.” That experience gave young Pru a patina of posh, while hardening her rebellious streak.

At the age of twenty, she planned a year in London — which somehow turned into five. She attended art school haphazardly and had a variety of odd jobs and lovers. Her recollections of those years have the fizz of a P. G. Wodehouse story: “Next, we all went off to Covent Garden, as the pubs opened there at 4:00 a.m. for the market growers. I wore an Eliza Doolittle hat, which Mum had given me, decorated with fake grapes, and I serenaded all the truckers with songs from My Fair Lady while they plied me with real grapes. In the pub I met a funny old Scotsman who claimed to have fallen in love with me and suggested we sell red cabbages together.”

Even as Pru assured her parents that “life in London is très gai,” her mother asked in a letter, “What the devil is going on over there? Egad!”

Back in Canada, a job at the visitors’ centre at Expo 67 brought Emery to a more passionate calling as chaperone of the stars: Liberace with his sequins; Hugh Hefner and two busty blonds; Twiggy and Justin, her hairdresser-manager; and Haile Selassie, the emperor of Ethiopia, with his chihuahua, Lulu.

Throughout her memoir, Emery recounts how opportunities tumbled into her lap, without analyzing the combination of well-bred and plebeian qualities that made people like and trust her. On a holiday to London after Expo, she had a chance meeting with Hugh Wontner, head of the Savoy Hotel group. He took a shine to her over lunch and immediately offered her the public relations job for his flagship hotel.

The Savoy’s perks included a desk with a “booze button” for her hard-guzzling Fleet Street friends. Along with the flowing champagne (“In those days, I could tell Lanson from Dom Perignon, or Tattinger from Bollinger”), there were comped hotel rooms in Paris and Switzerland and fancy cars. There was also a superabundance of celebrities — Al Capp, Elaine Stritch, Ginger Rogers, Robert Shaw — tapping on her office door or sharing drinks. Once a journalist from Weekend magazine arrived from Canada, intending to interview Bernadette Devlin, the firebrand Irish MP, but Devlin was sick. Would the reporter settle for Sir Noël Coward instead?

Emery’s love life “bobbed like a duck in a storm,” with few dry spells. In one of the book’s better zingers, she recalls a lover who was inspired to romance only “when we had consumed an entire bottle of Scotch.” Who was she kidding, she asks. “Looking back, now that I’m older, I should have made better choices with my Scotch.”

When she reached her late thirties, and having grown weary of champagne and frivolity, Emery returned to Canada, in the mid-1970s. After gigs at the newly launched Global TV and the Metropolitan Toronto Zoo, she started her life as a freelance film publicist with a Canuxploitation classic, Bob Clark’s sorority-slasher cult flick from 1974, Black Christmas.

The gay pirouettes of Nanaimo Girl’s early chapters turn into a bit more of a trudge as Emery recounts moments from many movies made in Canada and around the world. A few of these films are celebrated (Good Will Hunting and Eastern Promises, for example) but many are forgotten. If you were inclined to feel sorry for the unmarried globe-hopping publicist, don’t bother. She notes, in passing, “In between pictures I took on other projects and quite a few lovers.”

This breezy behind-the-scenes showbiz read is a reminder that even the brightest stars like to touch ground and get invited to play. The clue to Pru, the whimsical impulse that guided her career, is best captured in her story of meeting Edward Albee, the notoriously grouchy Who’s Afraid of Virginia Woolf? playwright, at Expo. Her initial impression was that Albee was “just plain withdrawn.”

“Feeling a little stressed out on the piazza outside the Canadian pavilion, I impulsively grabbed Edward and his boy-friend’s hands and said, ‘Let’s skip!’ And skip we did. That broke the ice, and Edward became a friend forever and never ceased to tease me.”

Liam Lacey occasionally brushed with fame as the long-time film critic for the Globe and Mail.