When I was thirteen, my family took a summer trip to the East Coast. For my father, it was his first time in Halifax since he had landed at Pier 21 several decades before. He was just eight when he, his brother, and his parents all stepped off SS Queen Frederica, in October 1964, part of a final wave of newcomers before the fabled immigration terminal closed in 1971. I was too young to understand the significance of our visit to the Canadian Museum of Immigration at Pier 21, which the Pier 21 Society founded in 1999, nor did I notice my father’s quiet reflectiveness. But I remember leaving with a bespoke souvenir for my grandparents — a framed photograph of the ship my father’s family sailed, marked with the date they disembarked. It still hangs prominently in their foyer in Toronto.

When we visited, the museum bore none of the hallmarks of a national institution; it simply wasn’t one yet. Perhaps reflecting the scrappiness of all those new arrivals who passed through it between 1928 and 1971, its true importance wasn’t immediately recognized. Only in 2011 did it become Canada’s sixth national museum. I recall almost nothing about the physical space, which is perhaps fitting given its beginnings as a tiny freight shed — a mere afterthought in the 1910s commercial scheme that was the Ocean Terminals. That contentious project represented an upgrade to the historic port of Halifax, one focused on trade and transportation infrastructure. It included a new railway through the south end of the city, and it became the region’s commercial backbone for a generation.

Pier 21: A History is an energetic effort by Steven Schwinghamer and Jan Raska, two resident historians of the museum, to share representative stories of countless would‑be Canadians — among them thousands of Italians like my father, uncle, and grandparents — who came through this gateway. It is also the story of evolving immigration policies, which were gradually liberalized within the narrow parameters of twentieth-century Canada. And though it was not the authors’ intention, a reflection on our nation’s immigration hist-ory and the hard-earned march toward greater cultural openness feels especially pertinent in the wake of COVID‑19, which has closed down international borders, paused global migration almost entirely, and brought a spike in anti-foreigner sentiment. 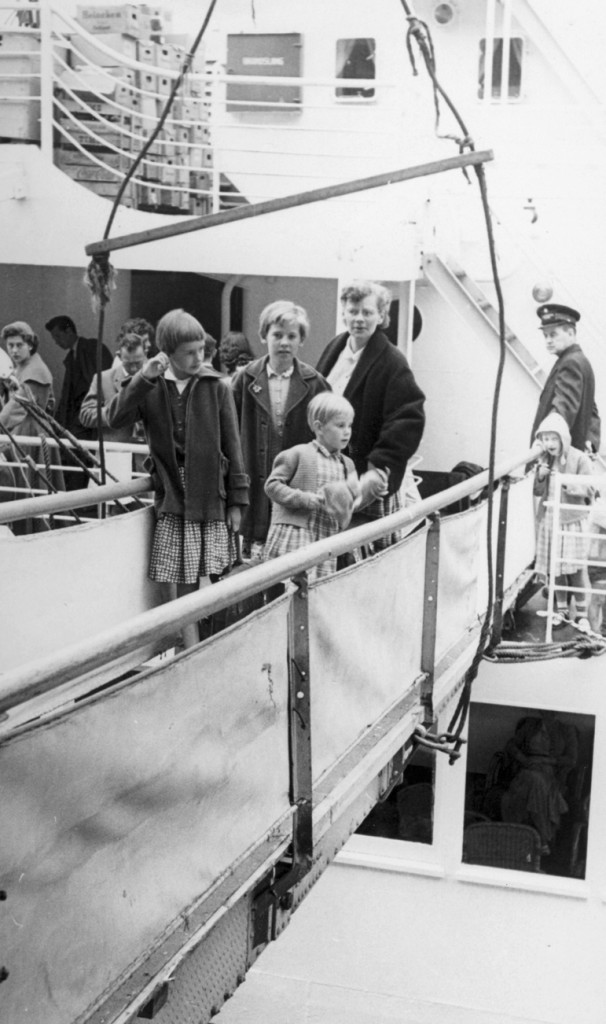 Two out of every five disembarked at Pier 21.
Image by Meijer family; Canadian Museum of Immigration at Pier 21

Like many commercial developments of today, the Halifax Ocean Terminals was the target of what we would now call NIMBYism. Plans for a tiny immigration shed, amid such a massive development, barely registered in the fierce local debates. The project itself took over a decade to complete, in part due to the interruption of the First World War, which both increased the demands on the port and slowed construction. Pier 21 finally opened its doors in 1928, when it replaced the old immigration shed at Pier 2.

Since the beginning, officials at Pier 21 made space for voluntary service organizations such as the Salvation Army, the Jewish Immigrant Aid Society, and the Catholic Women’s League, who provided everything from informal translation services to “ditty bags” filled with things like soap, toothpaste, razor blades, and rosaries. Such organizations formed the basis of a support network for newcomers; many became critical advocates for the liberalization of immigration policies on humanitarian grounds. All the while, Pier 21’s tight quarters had to accommodate medical screenings, civil interviews, and customs inspections, the last step before one received the coveted “Landed Immigrant” stamp of approval.

“Pier 21 opened just as radical shifts in public health began to affect immigration practice,” Schwinghamer and Raska write. “Medical care and expertise around immigration was a lively local political issue, as the city had been affected by cholera outbreaks and scares in the nineteenth century.” As a precondition for visas, officials implemented strict medical screenings prior to departure. Further health checks upon arrival were also the norm; prospective immigrants were denied entry and deported for non-viral conditions such as mental illness.

Less than two years after the pier opened, the Great Depression struck, dropping immigrant intake from over 40,000 annually to just over 1,000. In a move that reflected prevailing prejudices of the day, as well as a soft labour market, only American citizens and British subjects, including those from Australia, New Zealand, South Africa, and Newfoundland, of “sufficient means to maintain” themselves were allowed entry. The overt linkage of immigration inflow and immediate labour demands — a rudimentary precursor to the points-based system that was formally introduced in 1967 — is a recurring theme throughout the pier’s history.

Where the First World War influenced the creation of the wider Ocean Terminals facility, the Second World War fundamentally changed its purpose. The onset of fighting reversed the flow of human capital: Pier 21 became the primary departure point for both soldiers and matériel. It also served as the entry point for merchant mariners. As they waited for redeployment, many sailors were effectively put to use as temporary foreign workers. The “surprising leniency” of their processing “reflected Canada’s acute wartime labour situation and highlighted the persistent connections between immigration and labour regulations.” Pier 21 also saw another, somewhat niche form of migration: that of prisoners of war from Germany and elsewhere, who numbered in the thousands. The story of Gotthard Schönfelder, a merchant who supplied U‑boats before his capture by Allied forces, is an instructive one. After arriving in Halifax in 1942, the captive German was sent to work on a dairy farm near Ottawa. After the war, Schönfelder returned home only to come back to Canada five years later, this time as a voluntary immigrant sponsored by the same dairy farmer.

Following the Second World War, annual immigration quickly increased to 125,000, and a million newcomers arrived between 1946 and 1955. Two out of every five disembarked at Pier 21. Because nearly one in ten returning servicemen had married overseas, the shed had to process countless war brides, most of whom were British. At the same time, racially restrictive immigration policies gradually loosened — prompted by labour shortages in farming, mining, and forestry. Affected industries aggressively lobbied Ottawa for schemes that ultimately led to the immigration boom that made Pier 21 famous.

First, the bulk labour scheme which allowed Canadian employers to specify the number of labour contracts and workers they required, and second, the individual sponsorship scheme, a close-relative plan which permitted Canadian residents to sponsor family members and individuals who were not relatives if -employment and housing were guaranteed for them.

The government also recruited displaced persons “from camps in Allied-occupied Germany, Austria, and Italy.” Two months later, in January 1947, it removed Italians from the category of “enemy aliens,” again despite public opposition.

Another liberalizing influence on immigration policy involved Canada’s ambitions as a serious middle power in the emerging world order. International pressure, for example, dictated that Ottawa respond to the mass of displaced persons across Europe, including the likes of Moses Znaimer, who much later co-founded Toronto’s Citytv before heading up ZoomerMedia. As a young boy, he and his family arrived at Pier 21 on SS Marine Falcon, in May 1948, among the 34,000 Jews who immigrated to Canada between 1947 and 1952 (approximately 11,000 of them displaced persons).

In an effort to turn public opinion toward [displaced persons] resettlement as a means to fill Canada’s postwar labour shortage and to provide a humanitarian response to the plight of Europe’s displaced and persecuted, Canadian immigration officials chose a young, blonde-haired Baltic girl as Canada’s 50,000th displaced person under the [International Refugee Organization’s] resettlement plan.

The publicity stunt speaks to prevailing attitudes throughout the country — and in official Ottawa, which largely remained uncomfortable opening the doors too widely. And while the UN Convention Relating to the Status of Refugees was adopted in 1951, Canada did not sign it until 1969, listening instead to the RCMP’s discomfort with potential “undesirables.”

It’s perhaps no surprise that public opinion often lagged behind the labour needs of big business, humanitarian imperatives of the international community, and service-oriented prerogatives of voluntary service organizations. But twentieth-century realpolitik should not detract from the merry mythmaking that surrounds Pier 21, now considered a beacon of Canadian openness. This is how democracies function. If anything, Schwinghamer and Raska’s clear-eyed examination of immigration policies, through the lens of a single port of entry, demonstrates the impressive and hard-won gains of our modern immigration system. It also bolsters the fact that Canadians have an honest broker of our nation’s history in their sole surviving ocean immigration shed. For this, and for the nearly one million whom Pier 21 welcomed to our shores, we should all be proud. I know I am.