Peter Unwin’s Written in Stone begins at the end. Linda Richardson is driving an aging Westfalia van on one last journey from Toronto to Northern Ontario to scatter her husband’s ashes. Years before, when she first met Paul Prescot, he was “a sullen older man who cast an atmosphere of sullen disapproval.” He approached her at a party and asked if she was any good in a canoe — along the way, he explained the etymology of the word and quoted T. S. Eliot (he even inquired if she got the reference). Despite the shaky start, she agreed to go with him. Is this a story of identity? Or is it a send‑up of pretensions? Either way, Linda and Paul come together as a pair of restless souls paddling along the Grand River.

Their marriage has its difficulties. There are fights and infidelities, but also tenderness, and a sense of the two of them against the world. Linda is younger, thoroughly urban, and has a master’s degree in English (so, yes, she did get the Eliot reference). After slipping into “a bohemian half-world of theatre, ritual, and drinking too much,” she ends up undervalued and dissatisfied as a proofreader for gardening catalogues. Paul has a binary view of humans: you are either an indoor or an outdoor person. He despises the modern world and immerses himself in his semi-academic career researching Indigenous rock paintings. He writes several titles on the subject, including Pictographs, Petroglyphs and Paradigms of the Apocalypse, and is, in his own words, “the world’s leading authority on aboriginal rock art, east of the Rockies.”

Bored with work, Linda fixates on the Dictionary of Canadian Biography: “Everything real happened in those books. Only there.” She plans to read every volume before she dies. The volumes were gifts from her late father, perhaps to “give her a spine. Many spines.” But within them, she sees only stories of men and death, as she obsessively searches out the most misanthropic accounts. 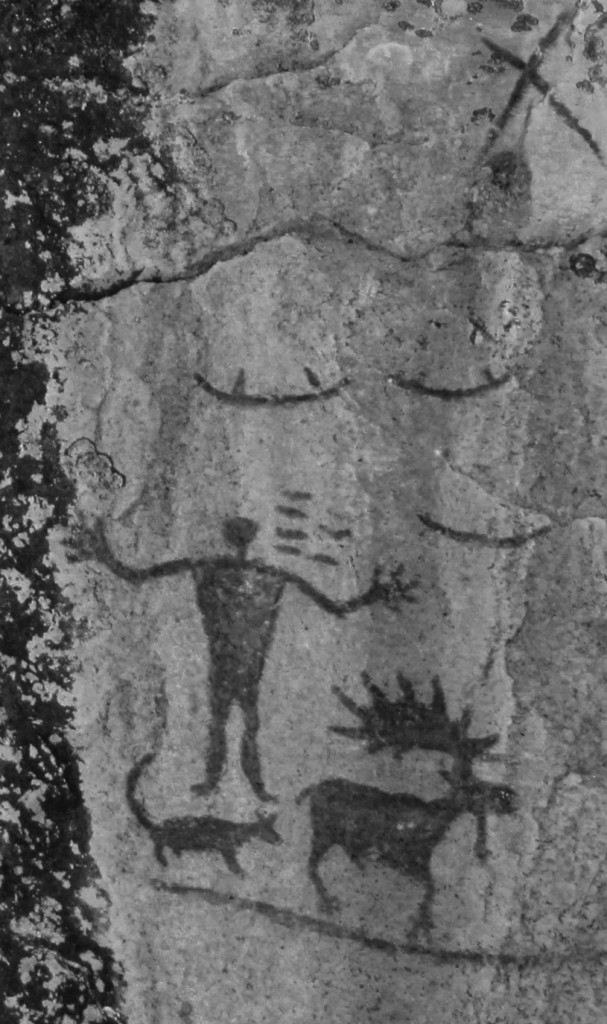 The paintings are living things.
Image by Chad Fennell; Flickr

Together, Linda and Paul set up competing stories of Canada as they try to relate to the land and its complex past, as well as to each other. “History. You can’t live without it,” Linda’s father used to say. Of course, living holds the true meaning.

Pictographs are the crux around which the story turns. Unlike the cave art in France or Spain, which dates back tens of thousands of years, the paintings at places like Agawa Rock, on Lake Superior, are from the seventeenth and eighteenth centuries. Yet, as writers such as Louise Erdrich have pointed out, “there is no completely accurate way to date rock paintings.” Her non-fiction work Books and Islands in Ojibwe Country — which could serve as an alternative title for Written in Stone — tours the land of her ancestors and provides a sensitive, intelligent means of experiencing images that remain shrouded in mystery. For Erdrich, understanding, especially through a Western, codifying gaze, isn’t necessarily something that can or should be obtained: “The rock paintings are alive. This is more important than anything else that I can say about them.” Similarly, Paul sees the pictographs he visits as “living things, like books. Living books”— even as he seeks to discern their knowledge. He interprets them at one point as “giving the finger to Cartesian duality.” But it is Linda who wonders if this wisdom could be hers: “It was out of reach, but close.” She doesn’t try to possess it; instead, she regards it as a pull, a questioning: “Beneath her hand she felt the rock still warming. Was it hers? Could it possibly be hers, a wisdom that seemed suddenly everywhere? What had she been given to know and to keep and to hold?”

The Indigenous view within the novel is more cut and dried. Paul’s guide on his research trips, a laconic character named Joe Animal, observes simply, “What they drawed is what they dreamed.” At one point, Paul asks him to look at three rust-coloured lines stacked horizontally. “That first line,” Joe says. “You know what that is, right?” Paul admits that, no, he doesn’t, and “neither do you.” Joe tells him it’s the Canadian National Railway. The second line is the Canadian Pacific Railway. And the third? “The Trans-Canada Highway,” Paul answers confidently. “The Highway of Hope.” Joe shakes his head and grins. “The third one is the end of the world.”

Written in Stone is a multi-layered book that bears rereading. It’s also a book that has to be grappled with. Unwin does not dispute that European settlers can relate to the land, nor does he ignore the endemic difficulties. He brings up Franklin’s ill-fated expedition and the Jesuit missionaries who went mad from starvation. A dystopian mood pervades the novel, his ninth: starlings fly into windowpanes and die; churches catch fire and burn down. Modern urban life is noisy and banal, while the wilderness carries an edge of magic that is more a marker of uncertainty than it is a happy escape.

From Kenora to Parry Sound, Northern Ontario is rendered evocatively. Along the north shore of Lake Huron, there are rocks, trees, and animals, but also the grim debris of settlement: “rusted air compressors and miles and miles of frost fencing, the crushed packages of takeout joints, empty cigarette packs that skidded the pebbled shoulders of the highway.” The book’s cover blurb prepares readers for a narrative that “goes beyond the surface acknowledgments of settler impacts, and exists on the border of two solitudes, where the known and unknown cannot be separated, where mythology and reality are one, and where an old and inaccessible knowledge holds the means to a possible reconciliation.” It is this, but not entirely.

The possibility of parody always lurks in the background of this novel. It’s difficult to know how to accept it. Paul could be the type of person — one many of us know — who embraces a different culture and then expounds on it tediously. But Unwin plays him straight — that is, until Paul’s rather farcical end, in which he perishes in a remote cove, on the equivalent of a vision quest, from an infected tooth. The narrative does not presume to take a theoretical bent beyond its protagonists’ existential searches. However, the author does ask implicitly about world view. Does yours (like your religion) help you live? Are you at peace? Does it trouble you? Will it overwhelm and destroy you? These are the urgent questions that the book raises. And throughout, the enigmatic rock paintings provide a motif, unsettled and unsettling. Close, but just out of reach.