Who Was Doris Hedges? The Search for Canada’s First Literary Agent

A compelling biography must answer two crucial questions. The first is “Who is this person?” The second is “Why is she or he important or interesting?” In that sense, this biography is an anomaly, since after reading it I knew tombstone data about the Montreal writer Doris Hedges but had little idea of her personality and motivations. And Robert Lecker’s assertion that she was “Canada’s first literary agent” is ridiculous. That might have been her claim, but since she never made any deals, she might as well have claimed to be “Canada’s greatest literary hoaxer.” Doris Hedges turns out to be neither important nor interesting.

But wait! Lecker’s subtitle offers a further hook. Its mention of “the search” implies that the reader will also learn about obsessive detective work and a biographer’s empathy with his subject, along the lines of A. J. A. Symons’s classic, The Quest for Corvo. There are a few such glimpses. One is in the acknowledgements section, where the author, a professor of English at McGill, thanks “several research assistants whose dedication was invaluable” and mentions further help from somebody who was “seriously infected with the Doris bug.” But Lecker mentions his own emotional investment in this project only in the introduction and the epilogue.

Enclosed by these bookends are a bare chronology of Hedges’s life and some brutal assessments of her literary output. Strung between these facts are a lot of rather long quotations from other people’s books about Montreal, the evolution of Canadian culture, female sexuality in the Cold War era, mid-century fears of nuclear war, residential schools, and many other subjects. 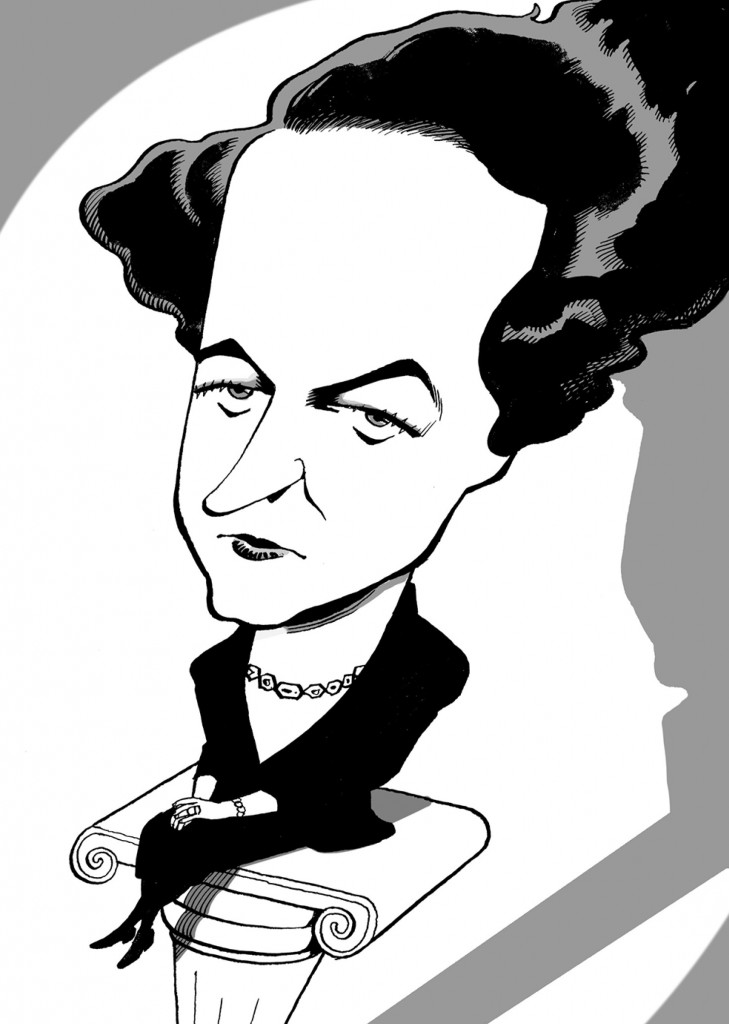 Writing her own pedestal.
Image by David Parkins

None of the standard reference works on Canadian literature mention Hedges, and she doesn’t appear in The Canadian Encyclopedia. However, Lecker has a rationale for exhuming his subject from obscurity: “Faced with the erasure of Doris Hedges, I became determined to find her again.” Hedges, he contends, was an ambitious writer who failed to establish herself in the English Canadian marketplace because it was dominated by men. Despite her efforts, she could not get past the gatekeepers. “We cannot understand success unless we understand failure,” he writes.

But Lecker faced a couple of serious challenges as he tried to make the case.

The first impediment was the shortage of primary material with which to bring life to a narrative about Hedges. The author himself laments the scant traces she left: “There are no business records. No manuscripts. No family albums. No memorabilia. Nor were there any family documents, and, as far as I could discover, only one person living in my own time had spoken with Hedges in person.” There were no children to prod for memories or personal correspondence to mine for psychological insights. But Lecker is determined to read between the lines; this is why, he says, the story should be written. Because of so many gaps and unanswered questions, Hedges’s life “invites us to fill in the blanks, to explore the city she inhabited, to ask questions about the nature of being a female writer when Canada’s literature was coming of age.”

From official records, passenger lists, and newspaper clippings, Lecker establishes that Hedges was born Doris Edith Ryde in 1896 in Lachine, Quebec. The daughter of a wealthy brewing family, she was cocooned in privilege from the outset; during a trip to Paris in 1910, she met Gertrude Stein, Isadora Duncan, and Vaslav Nijinsky. During the First World War, she worked with the Red Cross and the St. John Ambulance Brigade, and after the war she made frequent trips to England. In 1926, she married Geoffrey Hedges, a successful businessman. Mrs. Doris Hedges was active in the Montreal Junior League and frequently mentioned in the social columns of the Gazette, which described her fashionable outfits in detail. A 1941 studio portrait captures a glossy Westmount hostess, with a haughty gaze and an RCAF pin that her husband, then serving overseas, likely sent her. (And, I have to add, there is an unnerving resemblance to Wallis Simpson, the Duchess of Windsor.)

The first Hedges piece that Lecker discovered was a poem titled “Apathy,” in the April 1936 issue of Canadian Poetry. In the three and a half decades that followed its publication, she was an active public speaker and radio commentator; a talk to the Canadian Authors Association poetry group in 1944, for example, was titled “The Place of Poetry in Modern Education.” Four years later, she represented Canada in the arts competition at the London Olympics (along with Gérard Bessette). In total, she would publish six books of poetry and three novels, as well as several short stories. Her early poetry was championed by no less a literary icon than Lorne Pierce.

“Doris Hedges turns out to be neither important nor interesting.”

Although based in Montreal and regularly reviewed in the Gazette, Hedges does not appear to have actively participated in that city’s vibrant literary community. Was this because she was not invited, or because she was uninterested? She was definitely out of step with such macho modernists as Frank Scott, who pilloried writers like her in his 1927 satirical poem “The Canadian Authors Meet.” She was too privileged and her literary output too old-fashioned to be taken seriously by the literati clustered around McGill, including Hugh MacLennan.

But none of these facts illuminate Hedges’s thoughts and feelings; the reader of this book is left on the outside looking in. Lecker acknowledges that “little is known about Hedges’s private life. She never mentions her husband except to note that she is married to him, or to observe that he is ill or away.” So the professor looks to her poetry for clues and suggests that the romantic yearnings in many of them indicate extramarital attractions and lovers. He also mines her novels: “It is hard to ignore the fact that so much of Hedges’s writing focuses on dysfunctional families, strained marriages, frustrated sexuality, and dreams of imagined lovers.” The mind races — but there is no finishing line for such frustrating speculation.

Lecker’s second challenge was that most of Hedges’s work is dire (even he has to admit this). In the introduction, he suggests that although her writing “was not strong, it was no weaker than much of the work published by her male counterparts of the same generation.” He then argues that her erasure from CanLit is due to twentieth-century misogyny. But was that why her critics were so harsh? One poetry reviewer mentioned the “tonal poverty of so many of the lines.” Another suspected that Hedges the poet hoped “the force of feeling would blind the reader to the frequent thinness of realization.” Much of the poetry published in the late nineteenth and early twentieth centuries, by men as well as women, has not survived — and with good reason.

Hedges wrote indignant letters to William Arthur Deacon, the long-time Globe and Mail book reviewer, about his failure to cover her latest work. In one letter, she enclosed a photo, “in case you might like to use it” (I wonder if it was that supercilious 1941 portrait). When he did not respond, she wrote two letters of complaint to the newspaper’s editor. Deacon was vexed but eventually replied, noting her letters to his boss and offering a reasonable excuse for his silence. Not surprisingly, the Globe never reviewed anything more by Dorothy Hedges.

When Lecker himself analyzes her work, he cannot resist a slightly sneering tone. He points out that her first novel was about a man who is resurrected as a dog; her second described a man who reverses the age process by drinking a magical potion; and her third (self-published) novel often sounds “like it was written to promote upper-class, white Canadian values.” Perhaps Hedges’s books were ignored because they had little resonance in postwar Canada. After all, they appeared during a period of intense upheaval in Quebec politics and in Canadian culture, a time when Gabrielle Roy, Farley Mowat, Adele Wiseman, P. K. Page, and Robertson Davies were all writing. Then and now, there are a lot of would‑be novelists out there whose material is painfully bad, and who are forgotten for a reason.

“Hedges’s claim, amplified by Lecker, to be Canada’s first literary agent? This is a tale of self-delusion.”

And Hedges’s claim, amplified by Lecker, to be Canada’s first literary agent? This is a tale of self-delusion. In 1946, Hedges and two partners (one a junior member of the Southam newspaper empire) established an agency and rented space in the Dominion Square Building, one of Montreal’s most prestigious business addresses. Advertisements for Hedges, Southam and de Merian stressed the partners’ “considerable experience in the publishing field, both at home and abroad.” But as far as Lecker’s team could discover, the firm never did any deals.

Publishing was difficult throughout the English-speaking world following the Second World War, and Hedges’s agency was doomed from the start. She had no business experience and few contacts, and she was unknown within Toronto literary circles. There was also little demand for Canadian work within or outside Canada. Those writers who were successful during this period, such as Morley Callaghan or Sinclair Ross, already had agents in New York or London. Moreover, potential clients were likely put off by Hedges’s tendency to publicly deride Canadian writers as suffering from “defective education” and “sloppiness.” One client who did come her way was Hugh Garner, with his novel Cabbagetown, but he was so frustrated with her treatment of him that he declared to his editor, “I will do my own huckstering.”

Hedges’s venture soon closed, but her claims to be a pre-eminent agent lived on. She told a Gazette interviewer that she was handling “some 2,000 manuscripts sent by approximately 1,000 clients.” She told William Deacon that she represented eighty-five clients in Toronto alone. While acknowledging that such statements must have been barefaced lies, her sympathetic biographer writes, “There was a deceptive, self-promoting side to Hedges that intrigued me. At some level, she was making herself up.” He deplores the near-complete erasure of “her imaginative forms of self-representation,” which “set her apart from most other writers of her time.”

Doris Hedges died in 1972, at the age of seventy-six, and Lecker has spent years “pursuing her elusive story . . . with a passion I cannot explain.” After reading this work of literary hist­ory, I can’t explain it either. Lecker is right that one must always look beyond the main actors in the cultural foreground and explore blank spaces in the background, to see if interesting characters are lurking there. There are usually at least a handful. But sometimes they don’t justify a whole book, let alone the dedication and efforts of several research assistants.